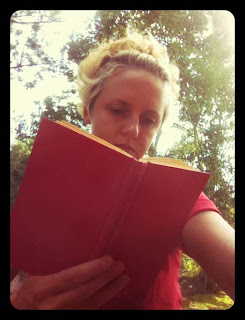 Isn’t this classic? When you create a self portrait while reading you will look more scholarly if your shirt matches the color of the book.
Seriously though, I am reading this book I found at the library. The title and author are of little consequence. More importantly I am reading it because I liked the way it looked. Is that shallow?
It is small, and red, the copyright date is 1933, and the word Paris is on the first page. Now do you think I’m shallow?
As luck would have it I’m enjoying the book. It’s been a couple of weeks since I’ve picked up a book. I’ve been focused on other things. It happens. But it isn’t until I (randomly) go back to doing something I enjoy, that I remember how much I enjoy doing it.
Here is my favorite quote so far:
“I like a view, but I like to sit with my back to it.”
I think this quote can mean different things to different people. For me it means that we all have different ways of enjoying how we live (the same) life.
There is also a great story in the book. (if you are an artist)
I’ll give you the short.
It’s about Matisse and how he and his family were in such despair when Gertrude Stein, and her brother, purchased La Femme au Chapeau. It was during the first autumn salon in Paris. As Stein writes, “There were a number of attractive pictures there, but there was one that was not attractive. It infuriated the public. they tried to scratch the paint off.”
For whatever reason, Gertrude Stein loved it, this painting of a woman with a hat, and wanted to buy it. She recalls it was five hundred francs. In making the deal the purchase secretary explained that you never gave the artist their asking price. The secretary advised her to offer four hundred francs. She did, and Matisse refused. Not knowing why she agreed to the five hundred francs. She loved the painting so much, despite the public’s hatred toward it. After this situation the Steins and the Matisses became great friends. What Gertrude didn’t know until later was how much that purchase meant to the Matisses.
So the Matisses were on hard times. He was supposed to be in Paris studying Pharmacy, but started painting instead. He had some small early successes. (beginner’s luck 🙂 What followed thereafter would be known as a “starving artist” scenario. Then came that first autumn salon. His La Femme au Chapeau was accepted, hung, derided and attacked, and sold. (this is an all too familiar roller coaster for most of us) Matisse was so distraught over the public opinion of the painting that he would have jumped on the offer of four hundred francs, but his wife said no. This was due to the fact that they needed the money for food, rent, and winter clothes for their children. The reason I enjoy the story is because Madame Matisse argued, “if the buyers like it enough to make an offer, then they like it enough to pay full price.”
As an artist this is something you know, but need to be reminded of.
And Matisse goes on to have a successful enough career and become a but of a collector himself.
On another note. Here is a painting I found. I love it. It is the craziest painting of the beach I have ever seen. As a matter of fact, I think it is rather Fauve. Don’t you? 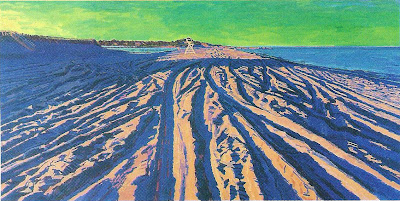 For records sake, I did not paint this, and do not know who did.
Later!