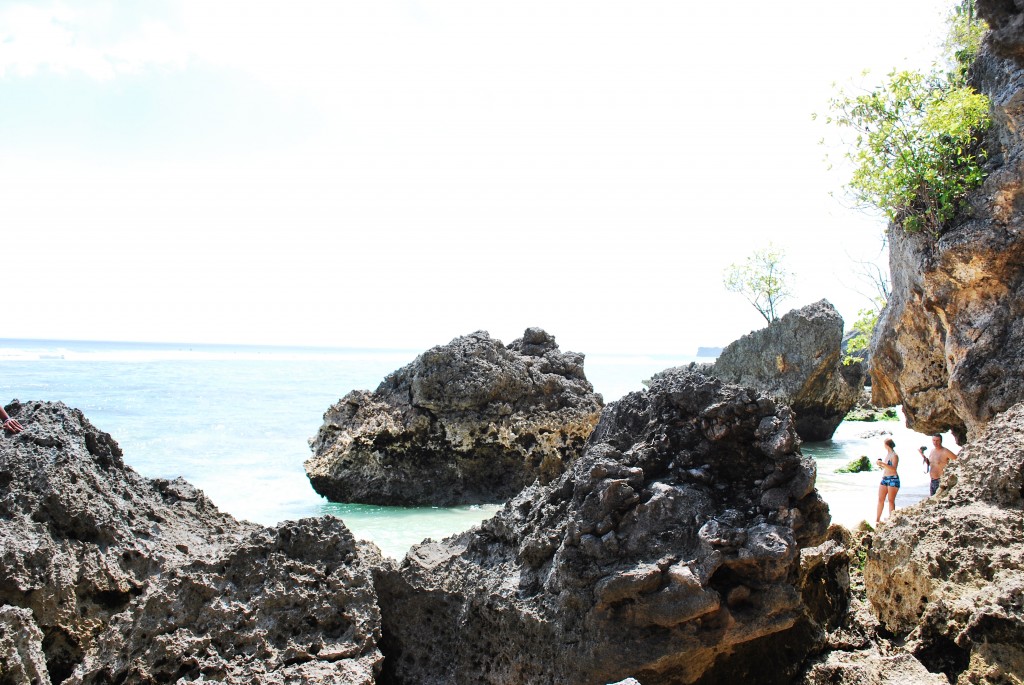 There was this one day, somewhere in the middle of our week at the surf camp in Seminyak, where there were just no waves anywhere. Most of us spent the day waiting and guessing; it gets pretty boring. Anyone who takes outdoor sports trips knows what I’m talking about. Skiers, climbers, divers, hunters, cyclists; we all play the waiting game, but none so bad as the surfer. On this particular day (I’m assuming it may have been Thursday) we drove to multiple spots. There were no waves. We were in a van with six people. That day the camp had three other vans out; also full of people. We kept driving past one another. It felt like we were chickens running in circles; no one knowing where to go, with the guides feeling the pressure of finding us something to ride. (other than the van) Once we had bumped into one another enough times we all drove back to the camp. Our day consisted of foosball, chatting, balancing tricks over the pool, drinking coffee, and checking Magic Seaweed. I still had a tiny, angry monster in my digestive track, so I was slightly relieved that I didn’t miss any good sessions.
The next day Phil, Madi, and I drove to Nusa Dua. It was unlike anything else I’d seen in Bali yet. Nusa Dua is a gated beach-town resort. You can not enter without passing the guard. You can not enter if you are up to no good, or selling something, or generally distasteful. ( I write this but I have never seen anyone turned away at the gate. It was very manicured, and quite. It wouldn’t have been my favorite place to spend a week. It was a bit secluded, but it was sure nice for our morning. There were no waves at Nusa Dua so we continued our search. 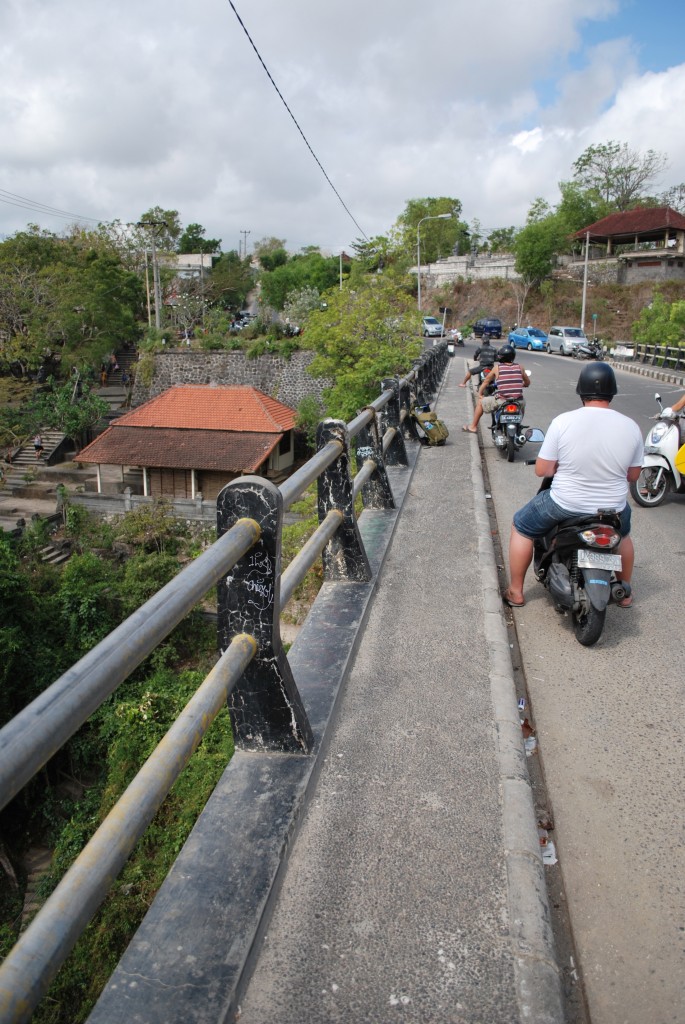 We drove along the coast until we came to Padang Padang. We could see the ocean from the bridge and it looked like there was decent surf; so we parked. Just getting to the beach is an interesting adventure in itself. I’ve never seen anything like it. As you might guess from the photo above, you have to walk down (many flights of stone stairs) to get to the beach. It is two or three stories below the road. The stairs wind through the cliff and jungle. Traversing the walkway can get pretty sticky when there are many people coming up (or going down) with surfboards. The wave at Padang Padang was a bit out of my ability level, but Phil and Madi were game. I rented an umbrella for $7.00 and took a nap. This $7.00, was quite an impressive rental fee. Normally one can get dinner and a beer for $4.00.

So once I had agreed to pay, all of the beach vendors saw me as an easy target. I had to sleep to avoid getting solicited nonstop. What I really needed was someone to sell me binoculars so I could watch the surfers. The wave at Padang Padang breaks a ways out from the beach. It was hard to find Phil and Madi. 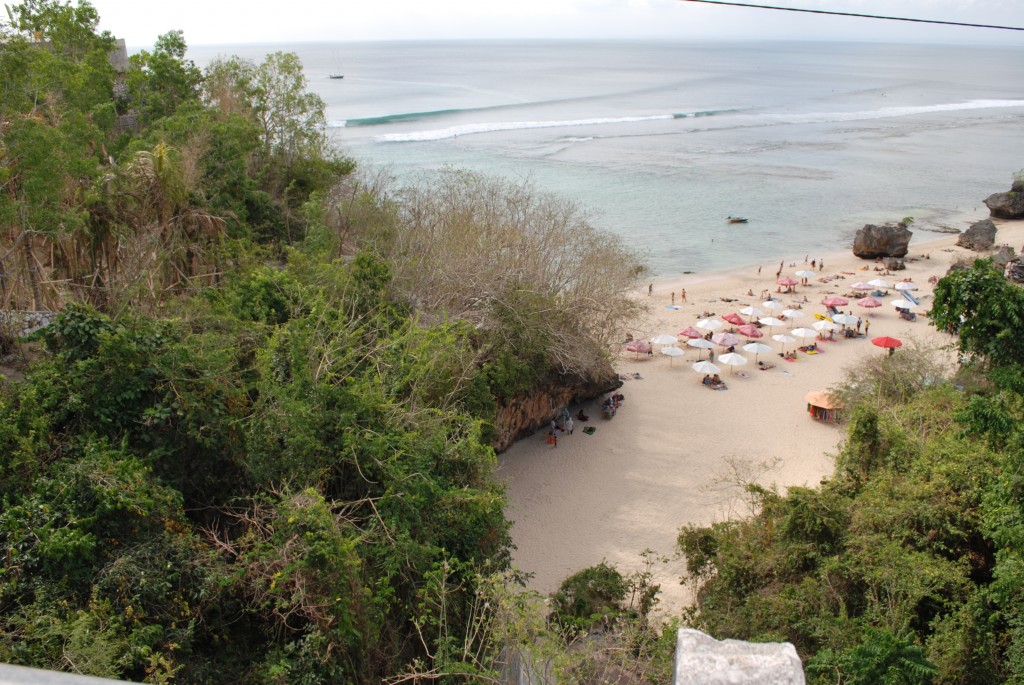 This afternoon that I spent alone on the beach allowed ample time for my mind to wander. I thought about many things. I have decided to share them here. Think of it as a mini Bali guide…

Saturday I finally got back in the water and did some real (real for me) surfing. My belly was better and my foot was sporting a new waterproof band aid. In the morning we went back to Batu Balong. It’s my guess that the surf guides like it there, but I did too. In the afternoon we decided not to drive anywhere. We walked to the end of our street and surfed some beach break. The waves were closing out. For those of you who have never surfed, this means that they weren’t breaking to the left or to the right. They were just peaking and coming straight down at once. This is not an ideal condition to surf in, but it was all we had so we made due. The current was also incredibly strong that day. Surfing was pretty difficult. I got mad at surfing during this session. It was the first time I had let my frustration get the better of me all week. I got so mad that I got out of the water. Then I felt like a dork for getting out; so I got mad that I had gotten mad. The cycle going on in my brain eventually drove me to decide to punish myself more by getting back in the water. The instructor said, “Strong current can make good waves here.” I thought to myself; of course, the one thing that is making the situation worse is the one thing that can be helpful. It’s like a thorn in your side. At this point surfing was feeling like a thorn in my side. But was it helping me?