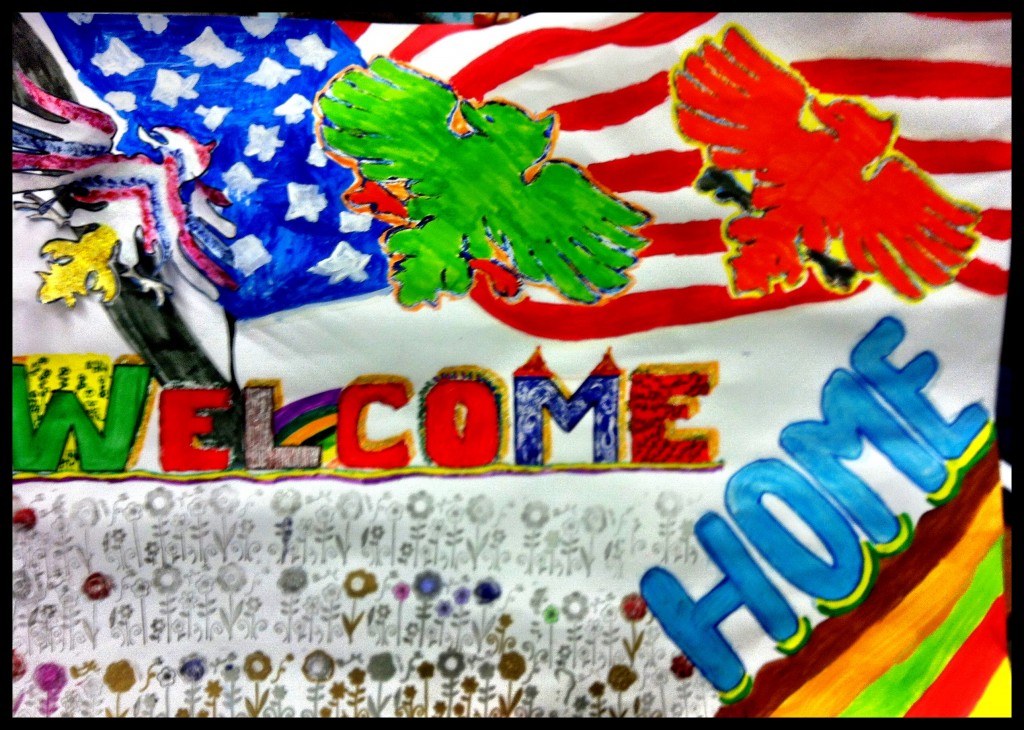 (This isn’t my Welcome Home Poster, but it is my most favorite that I’ve seen.)There’s two toothbrushes in the cup in the bathroom. I am back to using the automatic coffee maker. The dishwasher is full after two days. There’s double the amount of dirty, wet shoes in front of the front door. The bed doesn’t take so long to warm up anymore. Life is good. Strike that. Life has always been good, but now it’s easy.

Phil is home. Deployment is over; and already it feels like it never happened. We had his Welcome Home ceremony on Saturday night. It was huge, crowded, noisy, and exciting. 170 soldiers came back at the same time. Once the soldiers marched into the hangar, and they were released from their formation, it took me five minutes just to find Phil in the crowd. Actually, it was probably more like 45 seconds, but it felt like minutes. I couldn’t see him anywhere. I had to stand up on the top of the bleachers and let him find me instead. We hugged, and kissed, and I thought I was going to cry, but I didn’t. It was a great feeling to know that we were back together. The first instant of a reunion is a powerful moment in time. It’s one of the best feelings I’ve ever had. Cameras and iphones were clicking left and right. For the better, or worse, everyone in the crowd gets a million photos taken. I particularly enjoy the first photo posted of us on Facebook. I’m smiling, but Phil’s not even looking at the camera. It’s not the perfect reunion photo, but I like it because it isn’t perfect. To me, it’s a bit more indicative of the chaos of the moment. And its normality is a bit comical when compared to all the other “reunion kiss” photos. In the photo you can’t see Phil’s face at all. If it wasn’t for the name tape, I could be standing next to anyone. But I’m not; I was standing next to my husband who I haven’t seen in 6 months. We haven’t left one another’s side since. 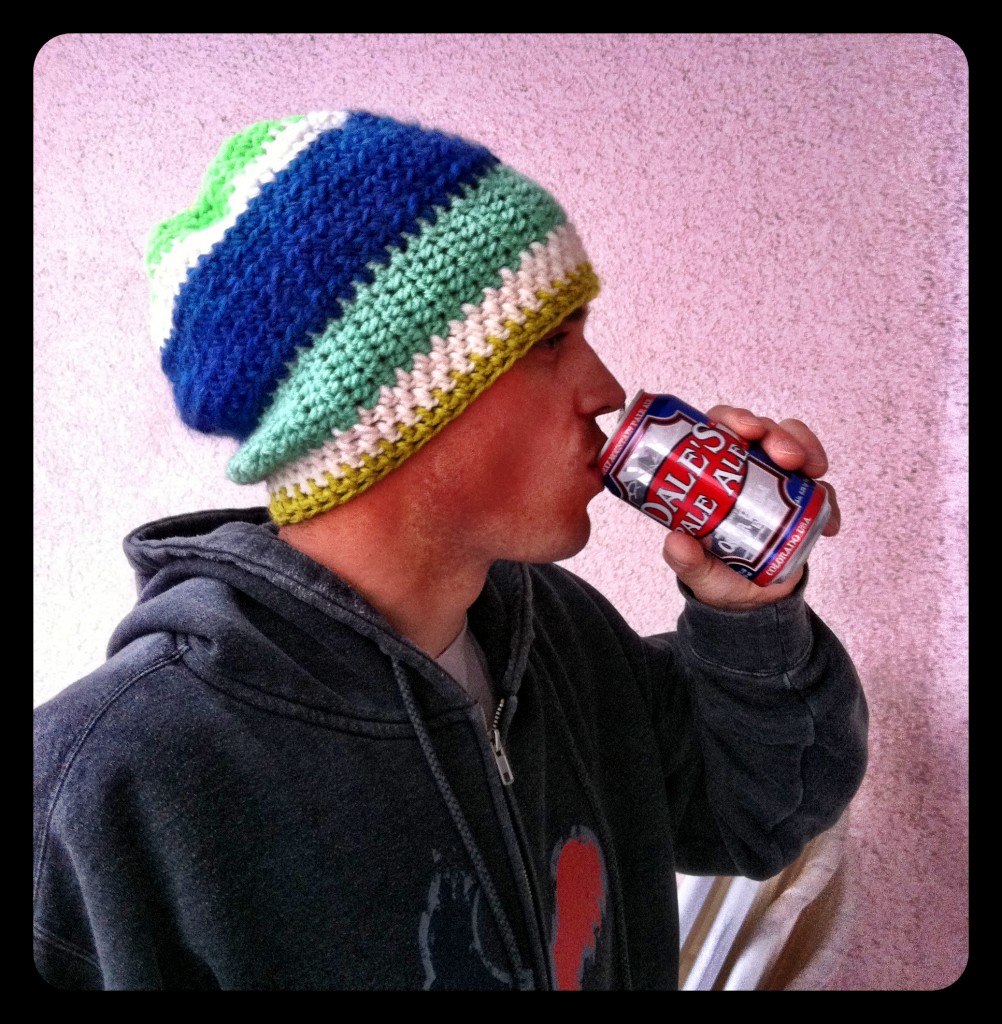 (Nothing beats a new, handmade snow hat and an IPA.)

We’ve spent a lot of time in the first 24 hours just talking. We went for a long walk in the snow covered woods and talked. We talked over a couple of beers. We talked while relaxing on the couch, and we talked while snuggled in bed. We shared new stories, dreams, and laughs. We talked a bit about the new people we had become while apart; and the new people we wanted to grow into together. We realized how amazing this deployment has been for the two of us. Of course, for me it was a bit easier than for Phil. I don’t think anyone wants to participate in war and fighting; or occupy a foreign, poverous, corrupt country and try to set it’s people right. But I think sometimes these soldiers feel like they have to; it’s a sense of duty. Phil has seen things and had experiences, to which I will never be able to fully understand or relate. They have given him a new perspective on life, and appreciation for what he has. He hasn’t been in the Army for very long. It’s incredible to see, and hear, how much he has learned in such a short amount of time. He is constantly pushing himself to be better each day. During deployment the environment is demanding, and depriving. You aren’t given much to work with and are asked to do a lot. You are faced with new problems and hardships on a regular basis. But for Phil, each of those problems were an opportunity to grow and become a stronger, more knowledgable soldier and pilot. It’s an intense work environment and there’s no room for error. From this ten months I can tell that Phil has become more well-rounded and confident. But I also think he has become more patient, appreciative, loving, and focused on what he wants from life. Being removed from civilization, as he knows it, has allowed him to separate the necessities from the superfluous and gain some clarity in seeing our future. 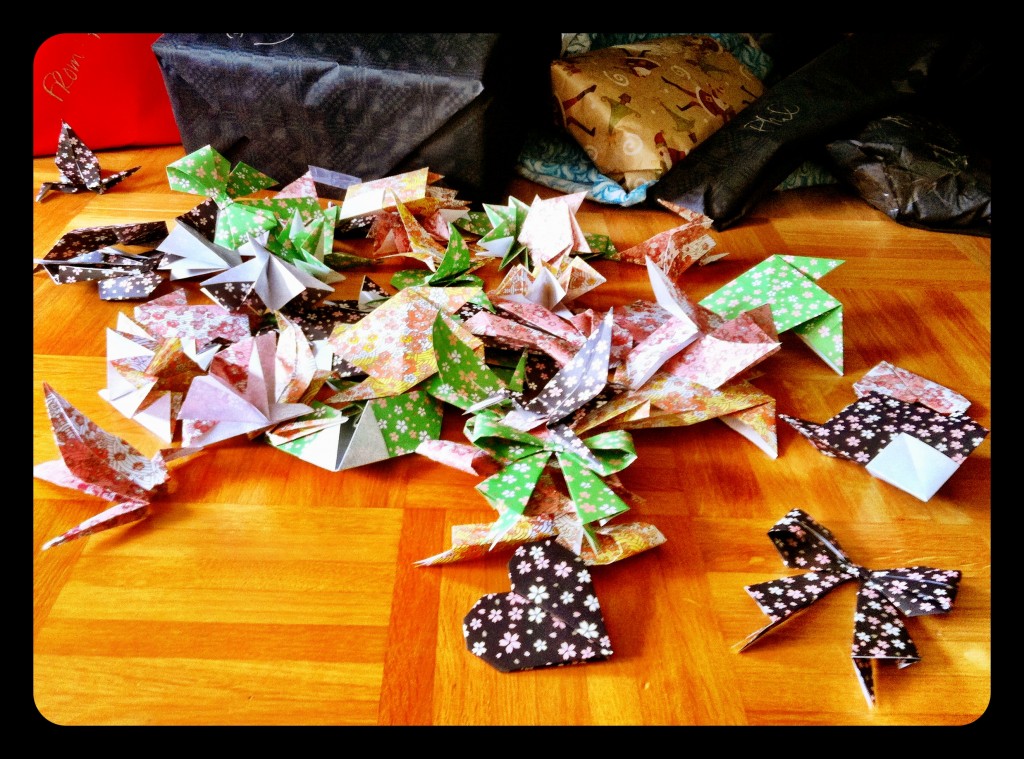 The way I experienced the separation is completely opposite from that of Phil. But it’s interesting to realize that I came out of it with a lot of the same conclusions. Physically we were in two different geographic environments, with different daily schedules, duties, and influences; but mentally we were growing more similar. I think this has been our greatest accomplishment (together) to date. As a wife of a soldier, without any children or pets or obligations, living in a strange country; it may seems ludicrous to remain separated from the love and support from family back in the States. But I decided before deployment even started that I was going to use the time to be alone and be OK with it. I wanted to live with myself, and really feel what it was like to be lonely; go through the ups and downs, and not be distracted. It wasn’t easy, especially at the end of a busy day, to come home to an empty and quiet house. But because of it, I am now capable of being with myself without feeling like I need to be somewhere else. There is a comfort, and company, in quiet. Of course, I didn’t arrive at this new found inner strength over night. It took many nights, a few inspirational quotes, some self help books, a couple bottles of red wine, some yoga, a few craft projects, some failed attempts at meditating, some crying, and an often funky sleep schedule. Being unhappy can be exhausting. For all the effort it takes to turn your thoughts positive, it in no way compares to that which you can waste on negativity, guilt, and wishing for things you don’t have. The days that began with me not wanting to get out of bed were the days that ended (after a little coaxing and determination) with me feeling most proud of myself. Sometimes I’d only accomplish one thing, but I could still feel successful for not ignoring the fact the world was still turning. I set some goals for myself in the beginning of the deployment and made a commitment to myself; maybe the strongest commitment so far in my life. I completed some of the goals, and came close to finishing some others. But most importantly; I never gave up. Saturday night I crossed the finish line, with my head high and a pep in my step. All of the things I may have been afraid of or nervous about in May 2012, I have survived. It’s February 2013, and the unfamiliars are familiar. I don’t know everything, and I’m not completely void of fear; but I do have the confidence and strength to know I can withstand challenge and act according to what I think is right.

Phil’s got a new wife, and Sarah’s got a new husband; and I think the four of us are getting along well. 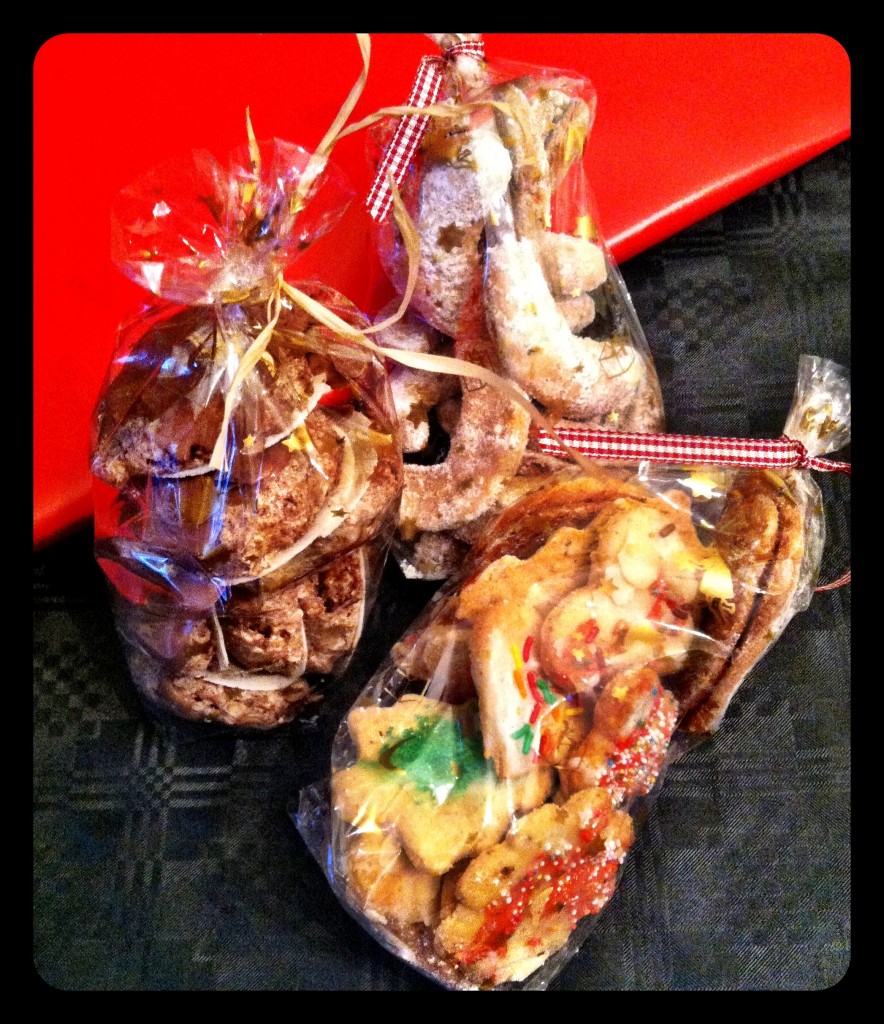 And most importantly; we finally celebrated Christmas together. I guess maybe I don’t have to call it Christmas, but it was definitely a holiday; with a tree, and presents, and a toast. The holiday, as you might assume, has continued, and not without the adorable participation from our neighbors. Katharina made over four batches of Christmas cookies for us to enjoy while opening presents and Ludwig gave Phil some fresh smoked sausage links that his buddy the butcher makes.

There is nothing more enjoyable than celebrating something that, truly, deserves to be celebrated. And we plan on allowing it to continue for (at least) the next couple of weeks.

6 thoughts on “When It’s All Said and Done”