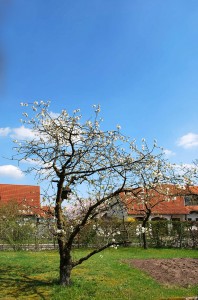 Those living in a ski town are quite familiar with the phrase powder clause. This is a term put in place to excuse businesses from opening, or excuse the absence of employees from work, when there is a ton of snow. If it snows a lot in one night the skiing will be incredible the next morning. Everyone wants a piece of it. Even the most hard working does not want to work. Thus, the shirk of real life and responsibility is excused.
I apply this same argument to beautiful, sunny days in Germany. I tend to see the sun less than I thought I would living here. On the days when it is out, and shining bright, I’ve gotta hit up Mother Nature and take full advantage.
I went jogging around a lake known as the Altmühlsee. (Old Mill Lake) It is only 20 minutes south of here, near a town called Gunzenhausen. It is a terribly popular place to enjoy being outside and get some exercise. I’ve been to this lake once before, but it’s taken me almost a year to come back. In my return visit what I hadn’t planned on was just how much exercise I was going to get.
So, as I said, the weather today is gorgeous. The sky is bright blue, the sun is blazing, and the temperature is around 70°F. I decided I wanted to get out on some trails and jog. Mother Nature was calling my name.

Whenever I investigate things here I seem to always miss details. Situations are never what I think they will be. I parked the car, and I looked at a few trail maps before I began my route. In looking at the map I couldn’t quite figure out what parking lot I was in. I could see the trail around the lake, but I couldn’t see a number defining it’s length. I don’t know if I just close one eye when I do stuff like this, or if details are less obvious to me because I’m in a foreign country. At any rate, I saw a black line meandering around the lake on the map and figured I could follow it.
The first hour of my run was perfect. I was next to the lake, all of the trees were in bloom, there were lots of lovely old people on bikes cruising past me, wildflowers were growing in the meadows, there were fluffy baby ducks swimming with their mamas, and I could hear Coo-koo birds in the distance. I couldn’t ask for a more enchanting surrounding. The problem began to arise when I was an hour into my jog, and I was still jogging. (Hello! I don’t usually run longer than 45 minutes.) To make it even kookier, they are repaving the path and I came upon a bunch of construction. So I’m hot, and sweaty, clueless as to how far along on this trail I might be, and all I can smell is tar…and I’m getting waves from topless German Construction workers. Hello! They probably thought I was ridiculous for running next to the construction. Or they thought I was crazy for running at all. Everyone else was on bikes or rollerblades.
I ran until I got to the next parking lot on the lake. (I now know there are 8 parking lots) It had a map like mine. I studied it a bit more intently than I had studied the original map and figured that I was more than half way around. As it made no sense at this point to turn around, I kept going in the same direction. Turning around would have been silly.

As often happens to those of us that overextend ourselves while trekking; I started to get a blister. Now that my ankle was bleeding I decided to stop jogging (aka dragging my body along the trail) and start walking so that I’d go back to enjoying the weather and the panorama. As I was walking it occurred to me that I might be getting tan lines from my bra and tank-top straps. I didn’t want to contract tan lines this early in the season so I removed my straps and tucked them into my shirt. As I was doing this I could hear two people laughing behind me. They rode past me on bikes and teased me (in German) for trying to take my top off when I thought no one was looking. It startled me and I felt a touch silly; then I realized how often Europeans love to get naked and I didn’t worry about my strapless look. Actually, I wish I could have seen myself. I probably looked a hot-mess. I was exhausted, still walking, and had now halfway disrobed. From the point where I started walking it took me another hour to walk back to my car. I was overjoyed to find it. The longevity of my walk was influencing my brain and I was beginning to hallucinate. I was starting to worry that somehow I had walked away form the original lake and was winding around another lake, even further from my car. At one point I saw a sign that read Ansbach 31km. I thought, at the very least, I could walk back to Ansbach if I got super lost…and end up there in three days…cold, dirty, and starving!
Thank goodness I packed a lunch. I got back to the car, grabbed my lunch bag and water, and sat on a bench to re-nourish; ignoring completely the fact that I should have stretched. I ate lunch on a bench at the edge of the lake, overlooking a few docked sailboats, right next to a beautiful tree with tiny white buds that smelled incredibly sweet. I forgot all about my tumult.
It turned out to be as perfect a day as I thought it was going to be.
I returned home, showered, and got back to real life…but not before stopping to admire the budding trees full of birds in my own backyard. 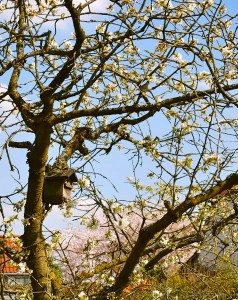