Here is where I went last night. 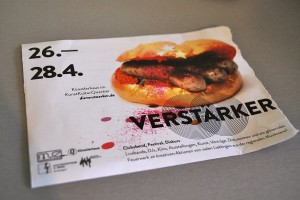 This was my favorite part.

The Kunsthalle (Art Center) in Nürnberg hosted a three day music festival. It was a creative gathering for artists, musicians, managers, and recording labels to meet, greet and showcase. I just went for the sounds. 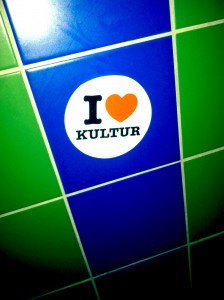 I wasn’t going to take any pictures, but I couldn’t resist this sticker on the bathroom wall.

The Kunsthalle is an impressive venue. The site has multiple buildings, floors, rooms, halls, stairs, balconies, and comfy spots. The scale of it, paired with all of its unique features, makes it a superb place for a festival. Last Christmas season I went to a handmade fair here as well. I can now report that it delivers acoustics just as well as it delivers products for gift giving. 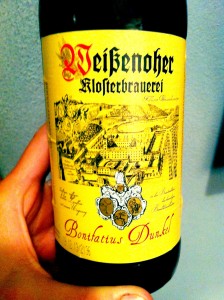 Bonifatius Dunkel…it has a nice ring to it. Don’t you think?

Here’s the beer I drank last night. I want to report on it because it was delicious, and I thought the label was cool. I photographed the label in an attempt to remember it, maybe find it somewhere, and drink it again. The chances of this happening are slim. There is so much beer in Germany, that I think it is hard to drink the same beer twice. Every restaurant, bar, store, or festival hall I’ve been to has a unique offering. This situation has it’s ups and downs. One of the downs can be not knowing what you’re ordering. For instance, last night the menu board read (among others) Pils and Kloster Süd. Well I know what Pils is, but Kloster? That could be anything. I gave it a go…and was rewarded for my bravery.

If you clicked the link to the Fest website than you probably picked up on the scale of this event. It was large; there were musicians of every kind, and from everywhere. The diversity of music was impressive. Seeing live music, and checking out bands, is similar to tasting new beers. You might like the name…or the label…or it might fall under a category (or genre) that you fancy…but you never know if you’re gonna like it until you taste it (hear it)…and hopefully for the band; the sound system isn’t skunked because it will ruin your experience.

Last night I heard some Indie Rock, Beat Boxing, Jazz, Urban Jazz, and something I would describe as Hip Hop Blues with a touch of Classical. (How do you find that CD in a Record Shop?) As I said, some of it I liked better than others; but I find listening to new music a constant refreshment regardless.

The crowd at this event was as diverse as the music itself; young and old, some hippies, some OG’s, some modern families, lots of university kids, and a few middle aged unmentionables like me. The first band I was in the crowd for was Igualdad. This is my Hip Hop Blues with a touch of Classical band. I wasn’t even standing there for two minutes and a guy to my left whipped out a banana and ate it. What kind of hippie brings a banana to a concert? Was it in his back pocket? I can think of a few accessories I would put in my purse for a concert over a banana. To each his own. I’m just glad to have also noticed that he had his shoes on. Some people didn’t. Igualdad had a real cool sound. They were 10 people on stage; two rappers, two girl soul-singers complete with matching outfits and dance moves, an electric violin player, a key board player, a drummer, and a couple of guitars and base. I couldn’t help but think these artists were going to starve for a long time with that many people on stage. 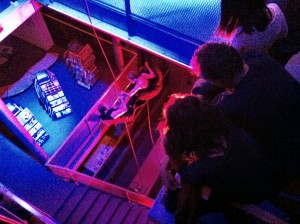 After Igualdad we made our way out into the hallway and stairwell. In this cozy foyer there was a theatrical music performance. A Saxophone Jazz band was playing some somber (but sweet) melodies while a pair of artists performed a dance. I’m calling it a dance but it was nothing short of interpretive. Think Ballet on Belay, or emotional improv meets Mission Impossible. I tease, but I did truly enjoy the performance. It was a man and woman, dressed in black, each on a rope and harness. They moved to the music acrobatically on the ropes, from the ceiling down three floors to the ground. We spectators were all filed in around the stairwell to see the performance. At times they were a bit too bird-like for me, then at other times their movements were very fluid and beautifully complemented the music.

It’s Borko, from Iceland. This band was going to be one of those hit-or-miss things for me. The sounds were peaceful, maybe a bit too peaceful and sweet for my tastes. I was struck that there is an innocence to living in Iceland, or in the fjords. These musicians were soft and creatively uninhibited. When you listen to the music you get a sense of the peacefulness that must exist in the performer’s soul. Either that, or I have it all wrong, and the performer is a very sad, tormented man longing for the aforementioned. At any rate, the trumpet playing in this band’s performance really gave the sweetness an heir of royalty. The trumpet chorus would come in and suddenly a sad song sounded incredibly triumphant.

In fact, many of the bands that performed last night had brass accompaniments. Instruments like trumpets and trombones don’t have such a forward standing spot in mainstream American music. I think these lesser used instruments give a band’s sound some weight, and soul, and roots.

Then there was Babeli. This kid stole the show. I would have paid the €7,00 just to witness his ten minute show. I’ve only ever seen beat boxing live, maybe two other times, so it doesn’t necessarily make me an expert but this kid was great. He would actually switch his mic back-and-forth from his mouth to his throat to give his sounds new levels and tones. He had the look too; a throw back track jacket with the chest boasting BROOKLYN, a backpack, a hat with a fresh brim, some smoke, and a light show that danced to the repetitions in his beats.

I enjoyed being at this festival last night because it reminded me of something I’d do at home. And I think it’s these times when you are doing things that are familiar that you can feel the most out of place…or feel the foreignness in the land you’re in. I was standing in a crowd listening to an urban jazz band, a band that sounded like it fell straight out of a bar in New Orleans, but the voices had German accents. When I heard phrase like Where the ladies at? and Break it down and One time, I couldn’t help but be amused at how universal some of my homeland’s language and styles can be.

Oh yea. And I got a free gift. Reservix (who ever they are) was there handing out complementary playing cards. I love games so much; of course I snagged a set. 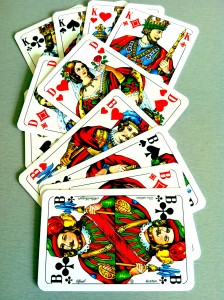 I think I might need a German’s help on this though…why are there only 32 cards? K is for King, but what’s with the D and B? I think the only game I could play with the cards is Go Fish.