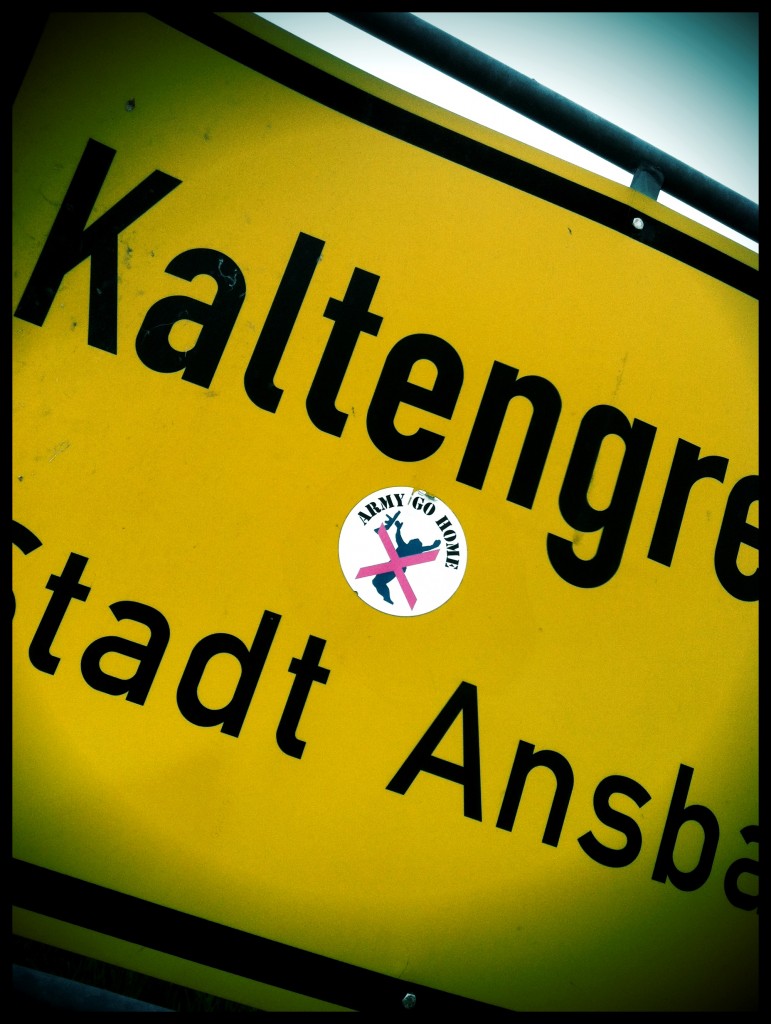 Running; it clears my head, gets me focused, and motivated. It’s for my body, but it’s also for my mind. I have a tendency to over-think things when I’m running, but I amuse myself in the process so I don’t see any harm.
I’m a Hello Jogger. You know what I mean. Some of you may even despise my kind. We’re happy to be jogging and to prove it we greet every person,car, delivery guy, and dead cat we jog past. Today was no exception. My run takes me through a couple of German towns, but also through the Army post. I can always tell a German driver from an American driver. The American drivers wave back; the Germans rarely do. I’m not chastising them for this, I’m merely stating a cultural fact. They concern themselves with things more important than trivial waves and smiles. Really, they are driving so quickly along these narrow, windy roads that I guess I’d rather have them have both hands on the steering wheel. Another contributing factor could be that running isn’t terribly popular here; at least not as popular as it is in America. Here’s a funny bit; in the German language (or at least here in Bavaria) we use the same word for walking as we do for running. No wonder Germans don’t really jog. They think walking is the same thing! After a jog I’ll see my neighbor. She’ll say, Did you go for a walk just now?” And I’ll reply, “No. I just went for a walk instead.” She’s thinking, “That’s what I just said.”
Here’s another cultural difference; in Germany (or at least in my city of Ansbach) they still have KKK parties. Those gatherings went out of style in the US a long time ago. You think I’m joking, and I sort-of am. Allow me to explain. These parties are Coffee, Art, and Culture Parties. In German that’s Kaffee, Kunst, and Kulture…they like to use the acronym. Please don’t ask me why.
Running also encourages me to solve problems. Today I solved the issue of needing beer buttons; or rather, a way to represent beer on the Oktoberfest scarves I’m going to make. My solution is to nix the buttons since I can’t find them; and just hand make some beer mug patches instead. I think they’ll be cooler anyway…and I’ve got pretzels for the buttons!
One problem I didn’t solve today was this pesky sticker on the sign as you enter my town. It really bothers me. I don’t take it personally anymore; as I have realized that most Germans have an opposing mentality. But I think it’s an ugly sticker, a mean sticker, and generally spreads hate. A sticker like that doesn’t make anyone happy; not even the person that put it there. Every time the guy that put that there sees it he is reminded of the one thing he can’t stand and his agravation grows. By the end of my run I had resolved to help us all out. When I got home I got my Goo-Gone out of the cabinet, got on my bike, and set out back to the sign with the stupid sticker. I feel dumb admitting this, but I couldn’t get it off! I don’t know where this guy got that sticker, but it is professional. After about 5 minutes I only had two little chips off the sticker. I’m not sure if I’ve got the tools to get the rest of it off. I left the sticker feeling a bit defeated, but I didn’t dwell. I still had more of a workout to complete. 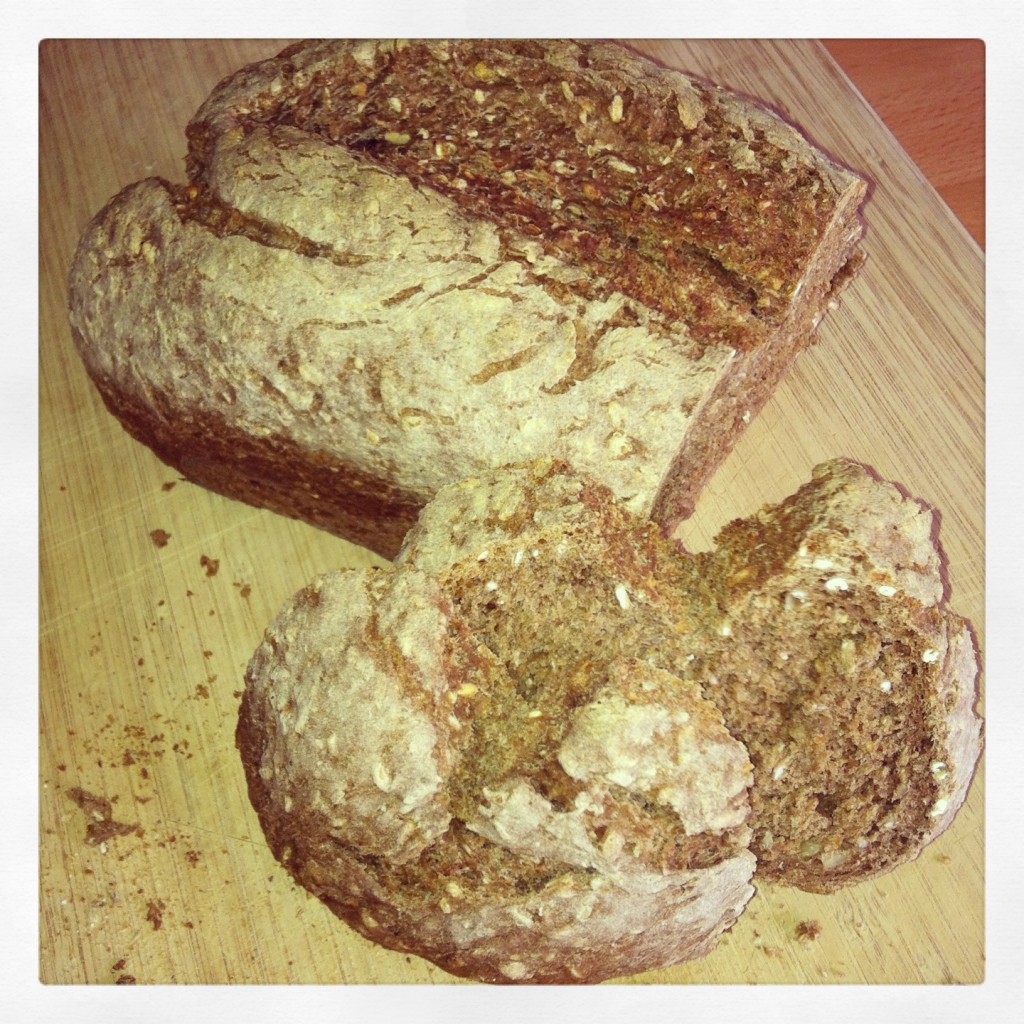 More working out? Sort of. I baked bread. Seriously. It was a triple workout, but worth it. It was more worth it than taking a bike ride to remove a stubborn sticker. In the flour isle of my grocery store I found dry bread ingredients that you only have to add water to, mix and knead, let rise, then bake. I checked the ingredient list and it didn’t have anything creepy, (like in Bisquick or something) just whole grains, yeast, and sauertig. Normally I steer clear of just-add-water baking, but I was comfortable with giving it a whirl. The kneading was definitely a workout. Workout Part II was getting the loaf out of the pan and slicing it. The bread is so dense. I think that one little 10” loaf weighed 2lbs. No kidding. And the crust is really crusty. I broke a sweat convincing the knife to grind through it. I now understand why many Germans have their own bread slicers at home. Workout Part III, can you guess? Eating it. I had two slices with my lunch; both of the ends. I think my jaw is still recovering.
I ate my bread with Lunch #1. I had two lunches today. Yesterday Ludwig caught a 12lb catfish and today Catharina cooked it for lunch. They invited me up. I declined since I had just eaten, but they insisted. Since it is beyond me to deny someone who insists I had some catfish. It was delicious; far better than any catfish I’ve had in America, and far fresher too. As we ate Ludwig boasted that our lunch would cost €23,00 at the fancy restaurant in town; and he’s right.
After lunch Ludwig took me outside and introduced me to his first two eels of the season. He caught them while fishing this morning. He claims that eels are the most expensive fish in Germany. His rumor has it that they sell for €60,00 per kilo. (I have yet to confirm the validity of this.) He says it’s because they are so much work from river to dinner plate. As Ludwig will describe it starts with a flashlight and digging up worms in the middle of the night. Then he drives to the river and does the catching. Once home he must stab and gut the eels and wait hours for them to actually die. Catharina tells a tale of Ludwig once cleaning the eels in the kitchen and leaving them on the counter. She came in a while later and they had wiggled (dead) off the counter, on the floor, and across the room. I find this terribly creepy. At any rate, prepping eel then turns into freezing the batches as they are caught. Once Ludwig has enough he thaws them out, brines them, and then cooks them all day in a smoker. The eels are not ready to eat until they come out of the smoker. Since Ludwig had his first catch today the guestimate is that we’ll be eating eel by late July.
I can’t wait.