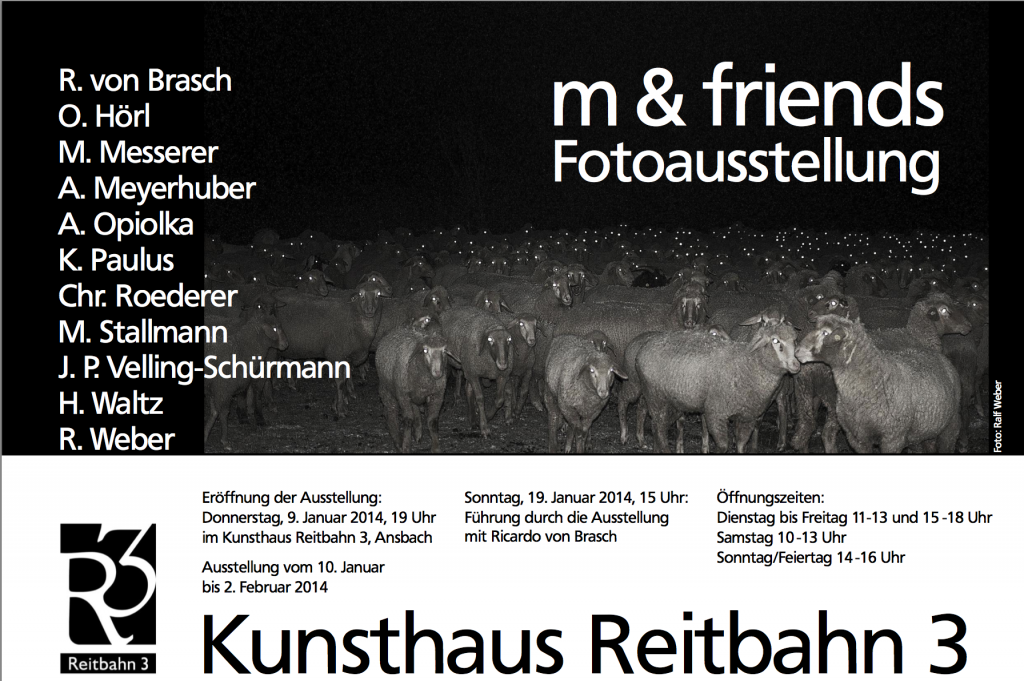 I think a lot of people look at Art and say, “I can do that.” (In fact, I know they do. Sometimes I even do it myself.) I hear it, more often, in reaction to a simple painting or a simple sculpture. I find it’s a rarity that someone would say it in regards to a photograph. In general, this is a foolish attitude toward Art, but to possess this opinion about photography is absurd. The photographer has captured a moment….never to be captured again. No matter how plain, or simple, or angled, or blurry, or bright and shining; the moment is gone.

I take pictures, but I am no photographer. I idolize photographers for their attention, gentility, assertiveness, sensitivity, and endurance. I realize some of my descriptive terms may oppose one another; but it’s because a photographer is constantly changing hats for each subject, and then changing hats again for each message to their audience. The Reitbahn Gallery is currently hosting a photography exhibition. It will be on display until Febrary 2nd. If you’re in the area, give it a walk through. It’s fabulous. There is a varied range of pictoral works from artists with varied motivations. One of the photographers is a high school kid, and yet another is the president of the Nuremberg Artist’s Association. My least favorite series of photographs were made with a camera obscura. My most favorite were poster-sized black and white portraits of other well known artists; nothing revolutionary, but (in my opinion) nice pictures of interesting people doing what they love never gets tiresome.

Free music and stimulating visuals are only two of the reasons I attend these art openings. The third, and most important, is to practice my real-time German speaking and listening. Last night there was a guest speaker (My apologies. I don’t know enough German to know his significance) who described many of the photographs around the room. I really enjoyed listening, and trying to understand all of his enthusiasms for the works. I think when you know an artist and understand their motivations; you can grow a better appreciation for what they produce. It matures beyond a picture on a white wall. As I listened to this man I learned why the night photograph of sheep was chosen as the representative photo for the exhibition. I also learned the process behind Ottmar Hörl’s 36 gridded photographs taking up an entire wall. I learned the names and occupations of the famous artists in the portraits. More importantly, I learned the process behind the camera obscura photographs and developed a better understanding for the artist’s intent. Which, by the way, was a serious intent. There were 1.8 million shots from the camera, compiled with computer program over the course of 365 days, layered atop one another for the final product. If for nothing else, you have to admire the photograph for the dedication it represents.

There was a photograph of a vagina on the wall.

Not a nude figure, just a vagina. It was hanging sideways. I’m not going to lie. Maybe it’s the juvenile inside of me, but I found that to be the most peculiar photograph in the lot. Why was there a vagina? Who is the photographer? What was the intent? Why was it hanging sideways like an arrow pointing toward the windows? For all of the “provocative” photographs that the speaker articulated on; why not the vagina? During his lecture my mind started to wander. Is it because I am a silly American that I found humor and intrigue with this subject? Is it so natural for Europeans to have photos of vaginas hanging up that no one even notices it? I wish I knew…or could know. Alas, I fear the details of this explanation would be lost, in translation and the histories of anatomy.

Enough about body parts and art.

To wrap up my account of my German Art evening I would like to say that the music duo that performed was fabulous. They were two high school kids that make a type of music they term electro swing. One kid looked like he stepped out of the Lumineers (with his skinny suspenders and white button-down) but he had his face in a laptop the entire concert, fiddling with buttons and knobs while adjusting his headphones. The beats he played would be something you’d hear in a coffee shop, hip salon, or hooka lounge. His partner-in-crime (tall, wearing a black sport coat that fit him across the shoulders, but was too short in the arms…very hip) played an accentuating saxophone melody to liven up the beats. I loved it. It was totally groovy. I recommend checking out this band, or this type of music. In fact…

(cue another plug for the Reitbahn 3)

There is a free Electro-Pop-Swing & Other Eclectic Musics concert at the gallery on the 19th of January. If you’re in town you should swing in.

Have a great weekend…maybe go out and get yourself a healthy dose of Art.