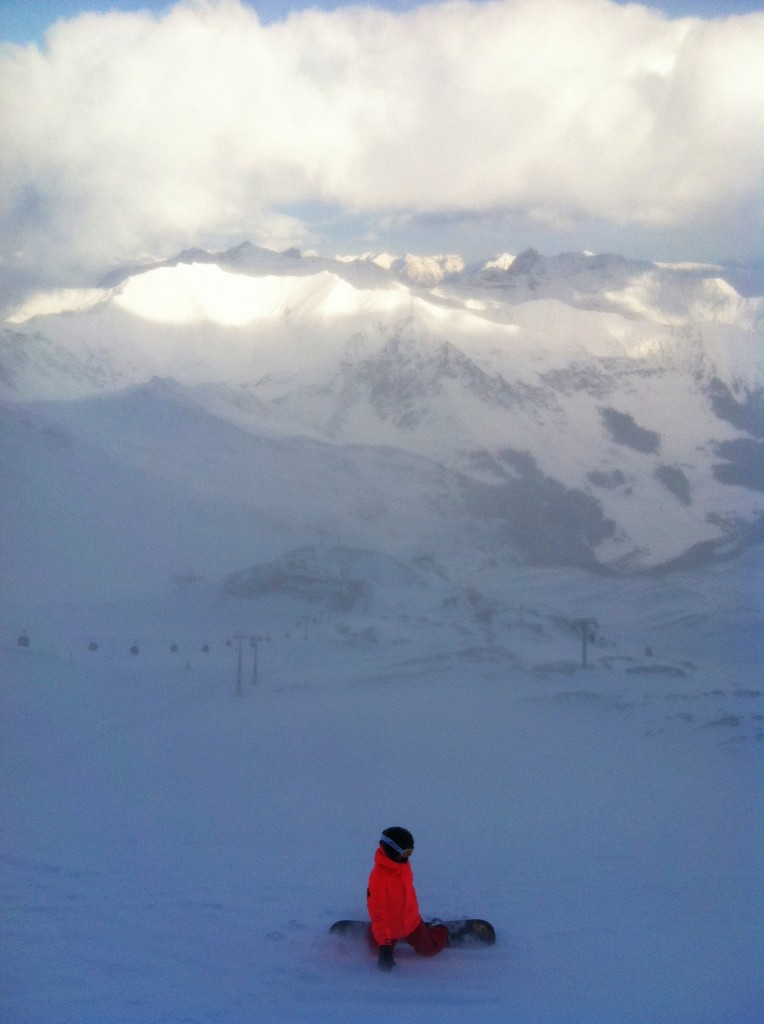 When we woke up on Monday morning we could actually see the lights of the hut high up on the mountain. Even farther in the distance we could see the snow cats still grooming the resort from the night before. The visibility got us excited, and Phil and I dressed, stretched, and ate breakfast quicker than we had all weekend. We’d been here, at Hintertux, Austria, since Friday. It had been a bit of a goofy-weather trip so far; so we were getting pumped for a great day. The town is Tux, Austria; but the ski resort is called Hintertux Glacier and Zillertal 3000. It’s a funny name, isn’t it? It sounds like a place where superheroes vacation. Based on the conditions we had to withstand, you might think we actually had superpowers. We spent a total of 17 hours on the mountain. 15 of those hours were in zero-visibility. You can’t tell the difference from the sky to the ground. The only way you can gauge distance, speed, and slope of the terrain is by keeping the boundary-mark sticks in sight. When I didn’t have a marker to focus on I would (literally) get dizzy (not knowing where I was, my board was, or the ground was) and fall over. The surprise of the fall would then allow me to recalculate where I was in time and space. Phil on the other hand, is better at floating than me, and had less issues maintaining speed and getting himself from A to B. The additional opposing force we battled was wind. I wish I had an anemometer (The tool one uses to measure wind. I didn’t know that term. I had to look it up.) with me on this trip. I have no clue how strong the wind was blowing, but it was severe enough that part of the glacier was consistently closed all weekend and Saturday the entire glacier resort was closed. It was intense. So much so, that Saturday we were forced to end our day by 1:30. An 8-minute chairlift ride turned into a 40-minute chairlift ride because the conductor had to keep stopping the lift every minute (or so) to wait for the wind to subside so he could start it again. I have never been on a chairlift that was bouncing and swaying so much. I had to stare at the horizon to prevent seasickness.

On a normal day of riding we are done by 3:00 or 3:30; with Après ski immediately following. When the day ends at 1:30 you run into a problem; the Après ski bar doesn’t open until 2:00 and the B.O.G.O. drink specials don’t start until 2:30. I know. The wait sounds painful. We stuck it out in the Local’s Café, drinking coffee and reading an interview of Kate Moss by Tom Jones in German. (In a magazine not suitable to mention) Once the Hexenkessl opened we headed over and kept it social.

On Sunday we awoke to find snow everywhere. We were the third car in the parking garage and the first riders to the top of the mountain. Despite the continued lack of visibility paired with gale-force winds, we reveled in sole propriety of the mountain for our first couple of runs. They were wonderful, yet exhausting. When we stopped for lunch I began to feel incredibly tired. I think one uses a lot more energy than one thinks; when one is riding and struggling to see the terrain. Even the best cup of coffee I’ve ever had (served dark and frothy with a piece of delicious Swiss chocolate) couldn’t bring me back to life. We decided on a few more runs despite my fatigue. As we were riding the gondola up we spotted (through the fog and snow) a new route through some fresh snow. We stepped out of the gondola and began hiking to it. Normally I would call this walking because it was only a couple of hundred meters away from the gondola and we were still on the resort. But because we were walking uphill, trudging in snow up to our calves, the wind was hucking, we couldn’t see anything, and for us it was uncharted territory; I’m giving myself permission to call it hiking. So we hike over to this route, catch our breath, strap into our snowboards, and attempt to continue down the slope. Instead of going forward the wind assisted me sideways. Because I couldn’t see anything I immediately dropped off of the icy snow bank I was perched on. Before I could realize what was happening I fell about three feet. Not terrible; but it startled me and shot my nerves. I regained my wits and tried to press on. Phil was already in front of me, probably about a third of the way down the slope. My imagination ran away from me and I lost all faith in my ability to get myself down the mountain. I made it down obviously; I didn’t fall into a crevasse, cause an avalanche, get lost, or die. I didn’t even stumble again; but I think because I was more tired than I realized (like, tired to the point of no return) I lost all my ability to be reasonable. By the time I got to the bottom I was annoyed at myself for freaking-out (unnecessarily) and not riding down like I know I can. I refused to allow myself to ride anymore that day. Phil had to go on without me, and take a few more runs, while I sulked in the lounge and waited for him to be finished. I vowed to get a good night’s sleep and tackle that run again on Monday… 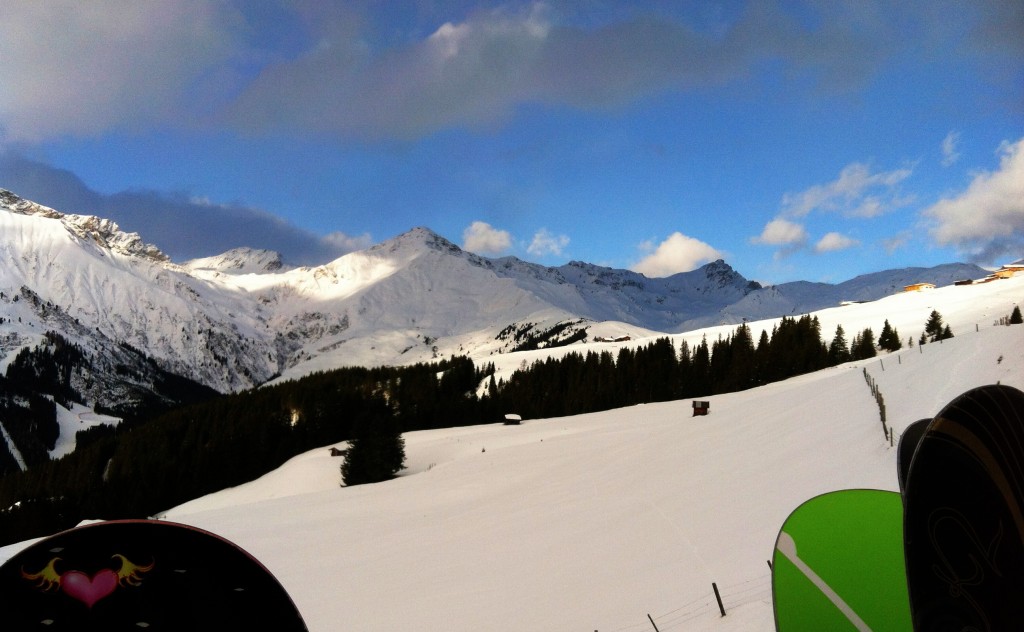 …And redemption never tasted so good. On Monday we were the first ones to the top of the resort for the second day in a row. Immediately off the gondola we hiked to the point of the same take-off as the day before. By the time we got to the bottom of the run I was pumped. I had ridden it exactly as I knew I could. Don’t get me wrong. It was steep and I am cautious; so I made the biggest, longest turns I possibly could. I didn’t crush it, but I completed it with confidence. We went right back up the gondola and rode it a second time. I was very excited. I felt like I had reached a new level for myself in this recreational sport that I love so much. We spent the rest of the day riding the lifts and looking left-to-right, scanning the resort for paths down the mountain in fresh snow. Riding down the mountain at a resort on a path that has not been predetermined for you on a map is quite exhilarating for me. I feel a smidge dorky to be boasting about it. It isn’t “the backcountry”, I didn’t ride a helicopter to get there, in fact I bought a lift ticket to be there. I’m not doing anything that thousands of people haven’t done before me. The Austrians can do it blindfolded, on one leg, with their hair set on fire. It’s not dangerous, but I still produced more adrenaline on Monday than I have my whole entire life. Humans were not created equal in our tolerance for the Extreme, and I am fully aware that my character is a bit farther down the totem pole than some. That aside, it’s a good feeling to challenge yourself and come out successful; no matter where the difficulty-level of that challenge ranks on the Universal Leader Board of Challenge. I’m not going to set any world records, but I can now use this victory to inspire myself and set new goals of accomplishment, and that’s what it’s all about.