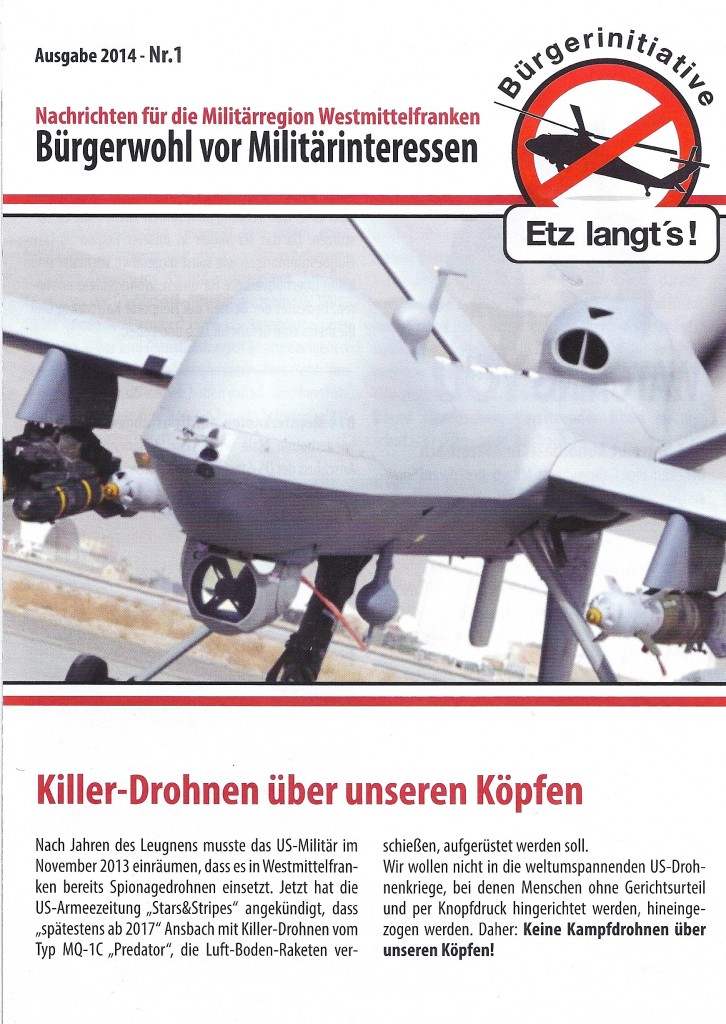 Last week the Universe kept presenting the most unexpected things at my front door.

Unless you understand German, I’m sure you can not read any information on the above pamphlet. Momentarily I will be making time to translate it myself. I wish I could call it hate mail; although I fear this is too strong of a description. A better selection of words is probably fear and misunderstanding and distaste for American activities propaganda. While I understand that the person responsible for this pamphlet is not out to stop me personally; he (or she) is out to stop the company my husband works for, the United States Army. I find it strange, and disconcerting to receive items of this nature in my mailbox. It makes me feel more unwanted that the “Army Go Home” sticker permanently stuck to my town sign.

I’m not really sure if I have one; other than it’s eye-opening to find one’s self on the less desired side of the coin. As I said, it’s uncomfortable and it makes you think deeper about self perception, right and wrong (which I’m pretty sure don’t exist), and public opinion and its affect.

What am I going to do?

Well, after I translate it into English and get a better idea of what it actually says; I’m going to email the sender of the pamphlet (who’s information is on the back) and kindly ask him (or her) to take me off their distribution list. I’m sure they’d rather not waste what little funding they have on someone who will not attend their protest. And even though they probably don’t care; I want to let them know that while I can appreciate their right to free speech, they hurt my feelings.

Moving on. The day before the pamphlet was, in actuality for me, the more disturbing event.

I live on the ground floor of a three-apartment building. We get our fair share, in Germany, of door-to-door salesmen. They always seem to ring my bell, which I assume to be due to my apartment’s location. I seem to always answer; falling prey to curiosity each time. Sometimes they’re selling fruit, sometimes better Internet, and still other times it’s a meter reader. On this particular day it was none of the forementioned. This day it was a young boy (I’ll say about 15 years old) who wanted money. I’m not proud to admit this, but I told him I didn’t speak any German. And honestly; I couldn’t really understand what he was saying. He did not appear to actually be German. I believe that he was trying to communicate to me that he was hungry and wanted me to give him money in the name of religion. I immediately wished this was a time that I had neglected to answer the door. I felt guilty for not wanting to give him money, but I also felt defensive because this boy had entered my house with demands. I felt like he was being aggressive; even more so after I tried to shoo him out the door and he glared at me and tried to go upstairs to Ludwig and Katharina’s apartment. In my head I was thinking I was going to have to man-handle this kid out of my foyer. Luckily I thought to tell him I was going to call the police if he didn’t leave, and so he left.

Weird, right? Have you ever heard of a beggar coming to your front door? A huge part of me feels like that must be illegal. That same part of me feels like that wouldn’t happen in America. (although I’m sure that’s wrong.) It’s times like these that I feel like an alien here still. It’s also times like these that make me feel like a jerk. I mean, it’s gotta be impossible to right every wrong on the planet, and give every person money that asks for it…and what is helping and what is hurting? It makes me confused, and childishly it makes me want to go home…as if these issues were any less prevalent at home. The adult in me luckily realizes that it is situations like these that help educate me, and it’s what I do with this new information that is more important. As hard as these lessons can be, I feel like I still have to be appreciative of them. One lesson is for sure, and it’s one that Ludwig has been trying to beat into me since I moved in; keep your door shut, lock it, and don’t open it if you aren’t expecting someone…especially if your husband is out of town. Otherwise a situation like the one mentioned above will freak you out once the sun goes down. Even more so when you go to close your front rouladen (outer metal window covering) and realize that it is broken. You’ll get crazy thinking the kid broke the rouladen so he (and his homeboys) could come back in the middle of the night and break into your apartment. Now that he knows you’re American he probably thinks your rich. You’ll set a booby trap of empty glass bottles in front of the window so you’ll be sure to hear him enter. It’ll give you enough time to lock yourself in your bedroom, call the police, and escape out another window.

Seriously. That happened. And in the morning I had to pick all the bottles up and put them back in the recycling container. I felt like Kevin in Home Alone.

Ludwig can be a bit overprotective. I think most older people can be. Don’t worry though, I declined his invitation to keep one of his guns in the event that I may need to use it. I feel like the bottles will suffice.