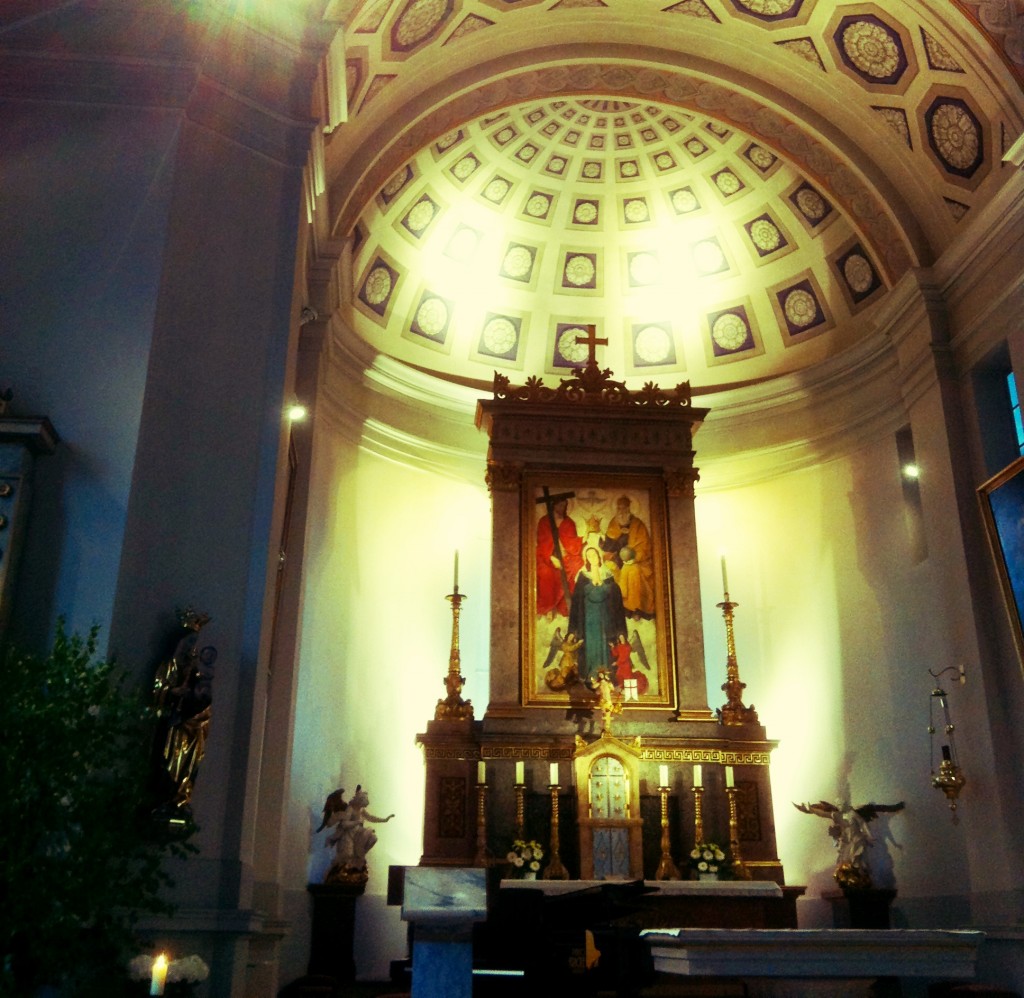 Just when I thought there wasn’t much more for me to discover in my town…I wised up and found a few new things.

Last week Ansbach had a small festival in celebration of Europe, and in particular it focused on its relationship with its sister-town Anglet, France. This is not the first time I have seen visiting artists from Anglet. The first time was a painting show at the gallery. This time it was a chorus and a brass band playing a concert in our Catholic church. Not only was it the first time I had stepped foot inside our Catholic church, it was also the first time I have heard opera in a church. I was astounded by the sound projection. The voices of the singers were more powerful than I ever thought vocals could be. I feel fortunate that I live in a town that offers such wonderful cultural activities. 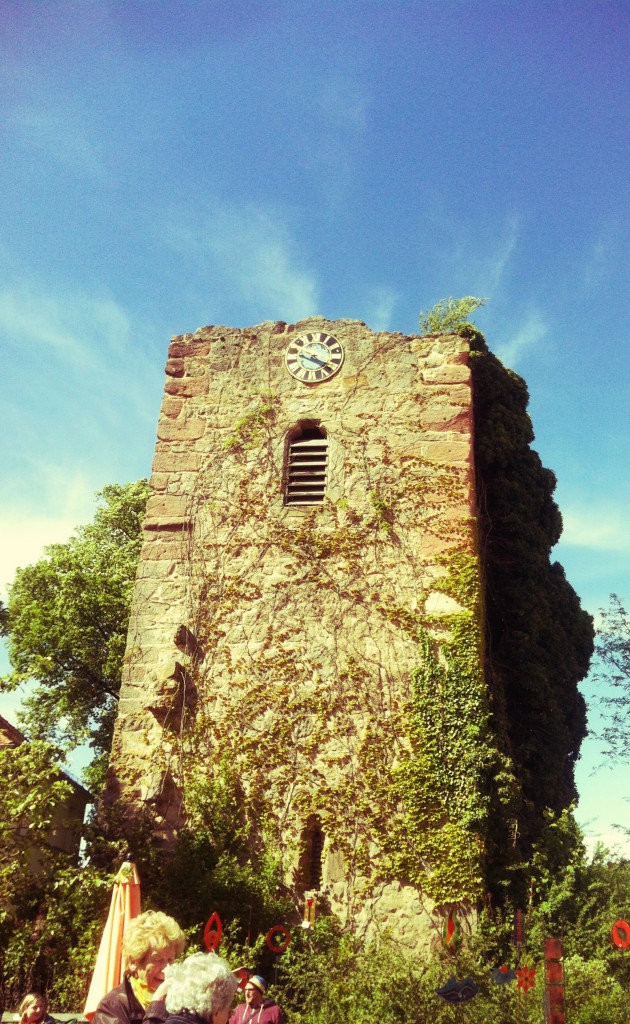 The weather here has been crazy. One minute it’s raining, the next it’s hailing, and then the sun comes out. The pockets of sun-liberation have been forcing me outdoors and I’ve been taking lots of walks. Normally I am a bike-rider, but with all the wonderful spring blooms I am inspired to take things a bit slower. I have been combing the towns, woods, and trails around my house for over two years; and would you believe I am still finding new ones? The system of nature trails and paved paths (around here) is astounding. I could walk for days, and (without ever having to leave myself a trail of breadcrumbs) never get lost.

As one of our walks this weekend wound down we met our neighbor, the sheepherder. It was great talking to him…not that I understood more than one or two words in each of his sentences. He was short, and jolly, and had kind blue eyes, and from what I could gather he likes his job, he loves his dogs, (although he wishes they had hair like the dogs that don’t shed) his dad was in the Nazi army and lost most of his fingers and was later shipped to Russia. Herr Mayer, the sheepherder likes helicopters, thinks the work in Afghanistan wasn’t too bad, but isn’t looking forward to what may develop with Russia and the Ukraine, he loves my landlord, he thinks my husband is pretty funny, he likes afternoon coffee, and he thinks I could pass for a German any day. 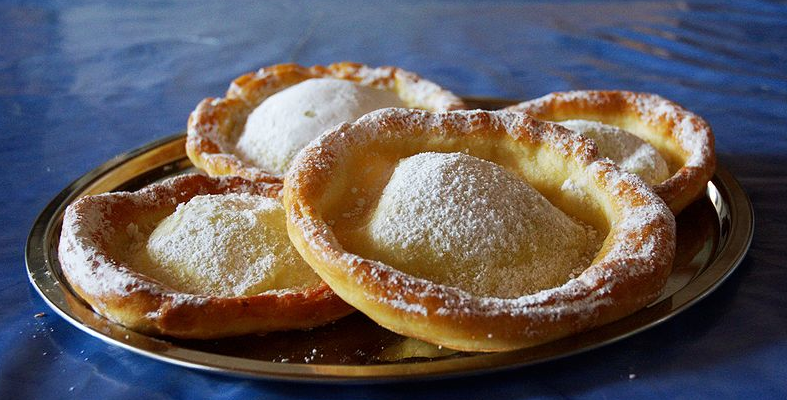 The peak of the weekend for me however, was tasting a new local delicacy. Again, you’d think after over two years that I would have tried it all, but sadly I haven’t.

It’s simple, it’s special, it’s oddly hard to find, and it’s impossible to find it made the way Oma used to make it. And you’ll have to excuse me; I’m not exactly sure what it’s called. Depending on the region of Bavaria you’re in, it can have any one of eight names. I think here we call it Küchla…or maybe Knieküchle. It’s a little cake made of fried yeast dough, only made fresh on special occasions.

The name means ‘Knee Cakes’, because when grandma used to make it, she mixed the ingredients together and then she would stretch the dough over her knee to prepare it to be fried. This left the middle very thin, so thin in fact that she could read her love letters through the center but the edges remained thick. After stretching the dough cakes, they were fried in hot clarified butter. If grandma was a Catholic she’d sprinkle the Küchla with confectioner’s sugar. If she was a Protestant she’d leave it plain.

Nowadays the dough is either drawn over the back of the hand, or turned out over “doughnut stick” in the shape of a mushroom.

I heard of this tasty little pastry from my neighbors. Ludwig’s mom used to make it. Katharina and Ludwig say she was an amazing cook, not because she went to school to cook or cooked exquisite meals, but because she was poor, hardworking, and creative. She could make a full meal with one or two ingredients.

Fried dough. Who doesn’t love that…donuts, funnel cake, beignets, trdlo’s? I’d take any one of them, for any meal, any day of the week. 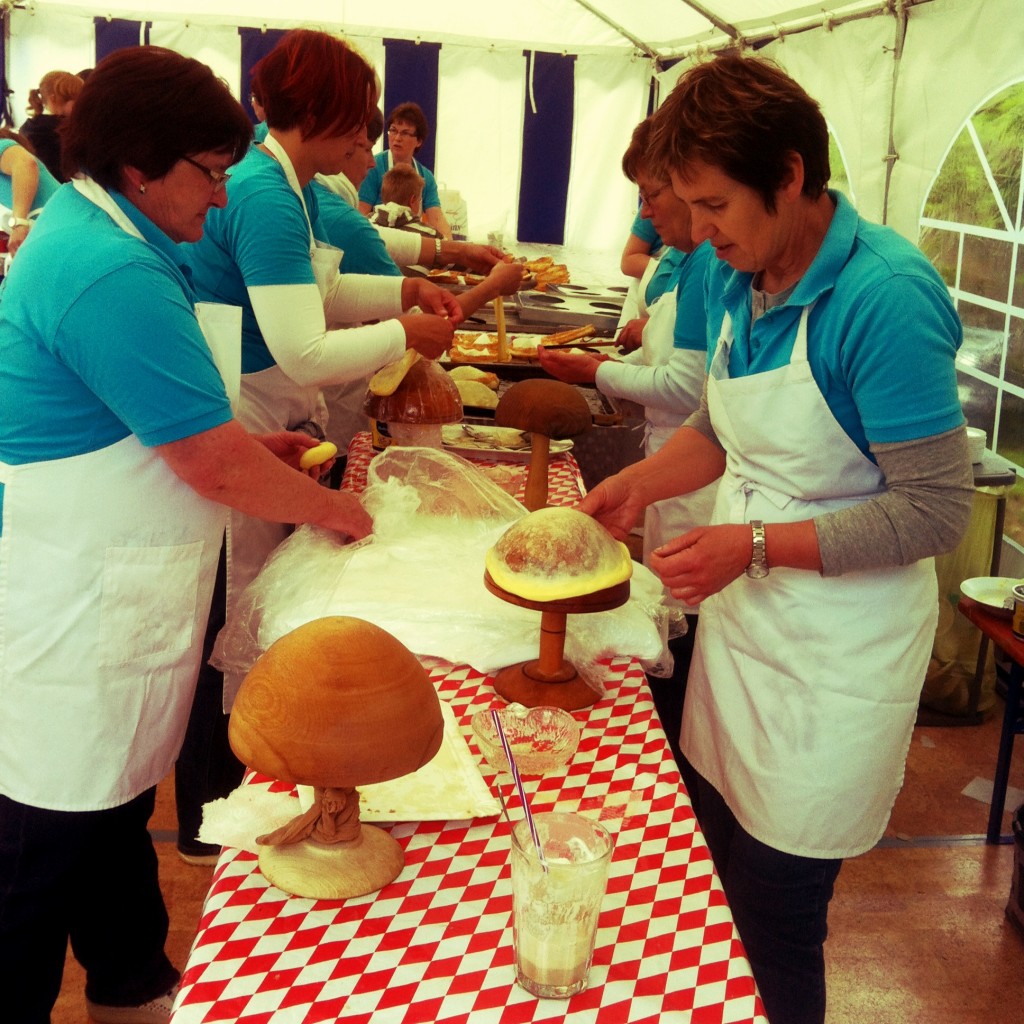 Fried dough. Sounds simple enough, right? Not really. It’s in the simplest flavors that the critics are most critical, and when you’ve got a few basic ingredients all the flavor is in the technique. If you know anything about fried dough, then you certainly know who does it best in your neighborhood. It’s hard work to make the Küchla dough, it’s even trickier to form the dough, and then it must be perfectly fried in clarified butter.

I had my first Küchla today at an Artisan’s Fair held in the Old School Garden in a town just outside of Merkendorf. One Küchla, a little bit of Jazz music thanks to the Dornbirds, one and a half kilos of Spargel (white asparagus) for the Spargel soup I’m about to make, one hand blown glass kaleidoscope, and one vegetable scrub brush, and I was on my way home…driving through clouds and wind to get home just in time to not get pelted by hail. It’s now time to settle down, and settle in, and make fabulous plans for executing my new German soup recipe.