Me. Just me, no one special.

Phil and I indulged ourselves yesterday in, yet another, beer-inspired mission.

Actually, the story truly starts in October, 2013, when I attended a meeting of artists organizing a Christmas bazaar in Fürth. I befriended a fabulous woman there, Ulla from Stoffrausch & Wolllust. That night she told us all about a recent brewery that she had visited, with good beer and interesting art and architecture. She wrote down the name for me, Kuchlbauer Brauerei, and I kept the place on my To Visit list.

About a month or two later, Phil and I were in our local beer distributor and found one of the Kuchlbauer beers. It was their Turm Weisse to be exact. In addition finding the beer label quite attractive, we also enjoyed the beer inside the bottle. The Kuchlbauer Brauerei remained on my To Visit list.

Recently we spent a fabulous four days in Vienna. One of our favorite attractions was a museum built and dedicated to an artist by the name of Friedensreich Hundertwasser. We enjoyed his life’s work so much that we also surveyed an apartment complex (that he designed) down the street from the museum, bought some of his postcards, and a poster of his work. 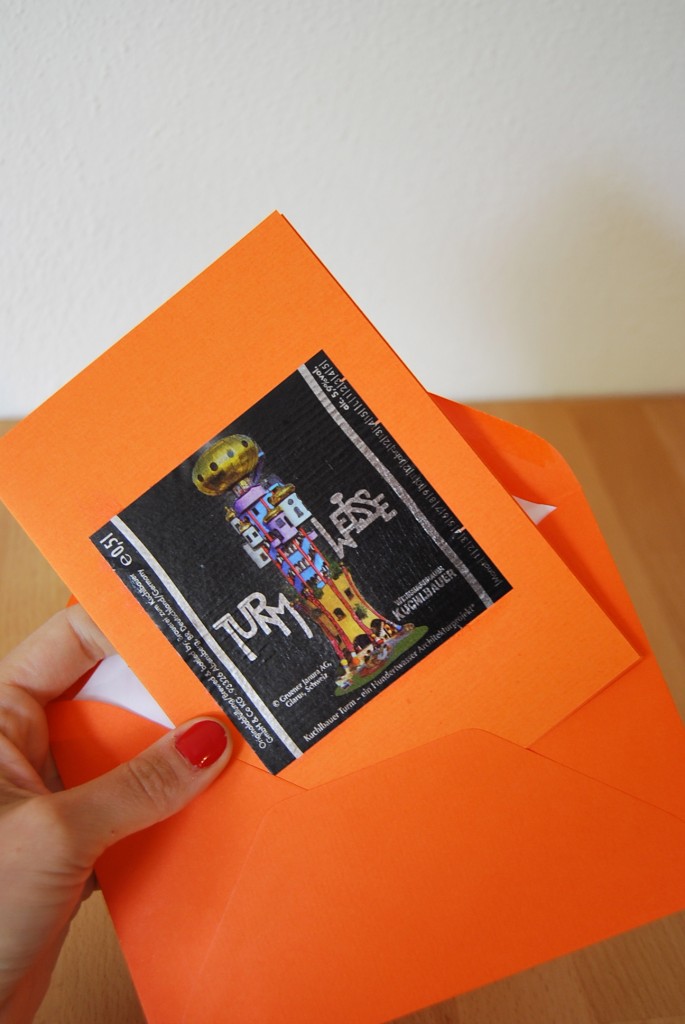 When we came home from Vienna my sister-in-law and I were DIY-ing together and making some greeting cards with beer labels, as I love to do. I was glueing a Turm Weisse label onto stationary when I finally read, and registered, the information it displayed. (Here’s the part where I finally come full circle) This brewery who’s beer we’ve been enjoying, and been meaning to visit, is a Hundertwasser project! Joy!

So in case in wasn’t already obvious; I think this is the best beer in Germany because it tastes great, and a large part of the brand’s personality is art.

The architectural playground that is the brewery stands in Abensberg, Germany. It happens to be in the exact center of Bavaria’s beer culture, surrounded by over 200 other breweries. Beer has been brewed on this site since 1300. To the south of the brewery one can find the famous hops from the Hallertau. To the east is the Gäuboden, where the excellent wheat comes from. The barley comes from the Bavaria Jurassic in the north. And in my last testament to it’s locational greatness; Kuchlbauer Brauerei is near Ingolstadt, the city where the Bavarian Purity Law of 1516 was put into action.

The owner of the brewery, Mr. Salleck, has a love of art and philosophy, and finds it quite advantageous to have combined this love with his daily work routine.

“Through creating something beautiful with nice shapes, natural curves, cheerful colors, and the glimmer of gloss and silver, one creates something extraordinary that will have a positive impact on everyone’s life. But art has another advantage. If one works in a creative and imaginative manner rather than always following the same scheme, problems can be solved as solutions might arise in unexpected ways.”

Kuchlbauer brewery remains a smaller establishment. I believe it is within these smaller companies that the care, and honor, in production is preserved. An example would be the maturation of a wheat beer before it hits the consumer market. Many larger companies will shorten the maturation time needed in order to satisfy a higher demand. Kuchlbauer does not. They maintain a four week maturation period because they believe brewing beer is an art and a craft. Good beer needs time. Another outstanding Kuchlbauer fact is that all of the water used in the production of their beer comes from their own, personal source. They maintain a well that is 28 meters underground. They can ensure a consistently supreme water quality for each batch.

While on the tour I learned one of my favorite facts to date. In 2007, the Hop was the medical plant of the year in Germany. In Bavaria they say that it is the hops that give the beer its soul. And if beer has a soul, then it must be good for my soul.

This is one of many awesome propaganda posters decorating the tour. Here are some other encouraging words for beer drinking that we read along our way.

“Beer creates pleasure and sociability, appetite at any time, eliminates annoyance and vexation, a treat for a man or woman, gives strength and calms nerves, it even relaxes your limbs, exquisitely deletes every thirst, the young and the old agree it’s pleasurable. It belongs in every room in every home.

Thomas Mann says, “I drink it every day for dinner, a glass of light beer, and I react so strongly to its quelling of my condition. Just a half liter gives me rest, bracing and armchair comfort.” 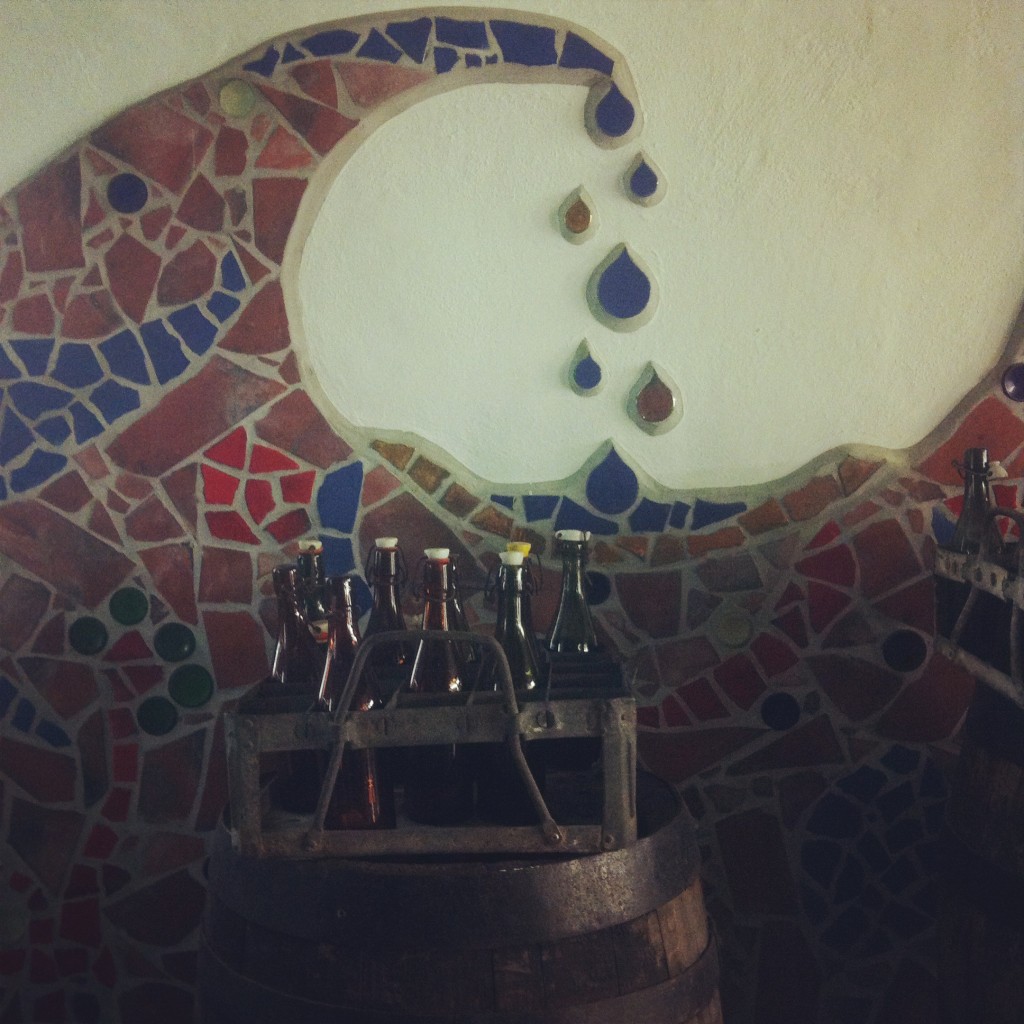 In conjunction with all of the rally cries proclaiming the positive qualities of beer, Hundertwasser added his own proverbs for Art. One wall reads: A drop of art is often better than a sea of knowledge.

The highlight of the brewery tour is the tower designed by Hundertwasser and built by his architect, Peter Pelikan. (Hundertwasser died before the completion of this project.) It is a spiral wonderland of color, shpaes, and coves. The base of the tower is home to the largest collection of wheat beer drinking glasses. There are 4200.

If you’re in the area I recommend giving this brewery a visit. You will be delighted by the architecture, inspired by the life of an artist, and have your thirst tranquilized with a beautiful wheat beer.