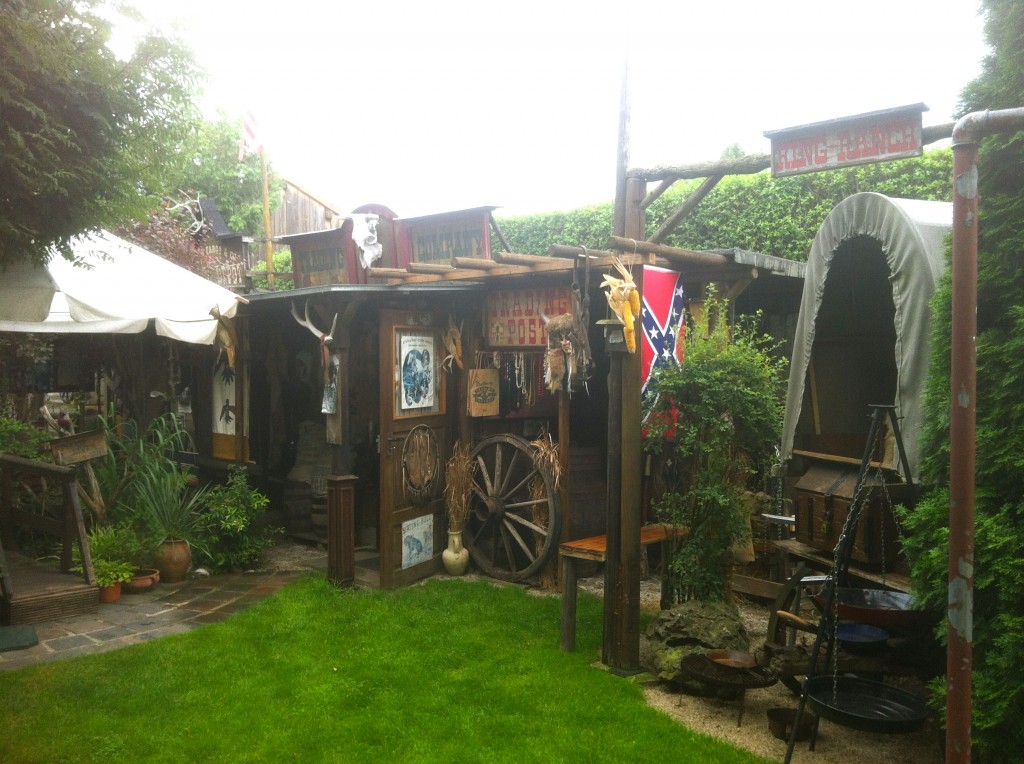 My landlord came over our house a while back. He said a friend of his (who we’ll refer to as Gerhard) was having a party and he wanted to inivte us. Hans said Gerhard, who lives not far from here, had a bunch of American cowboy and indian antiques. He built a saloon in his backyard, and a teepee, and every so often he has his friends over for a whiskey and a pow wow. Since we are some friendly Americans, that understand a good bundle of German, we should come along. Of course I couldn’t resist the invitation. I told Hans I’d wear my cowboy boots. (which are not American at all, but Italian) He was delighted.

During the conversation, in which Hans invited us to the party, he was pretty subtle about the extent of Gerhard’s hobby. It’s not a hobby. I only met the man once; but I’d call it an obsession. At the party we met Gerhard’s son-in-law. He, very consisely, described for us what happened to his father-in-law. The son said, “One day he watched an old American western film. He liked it and watched another, and another. He always loved the saloons in the western towns. He thought to himself that he wanted his own saloon, so he set out to build it.” 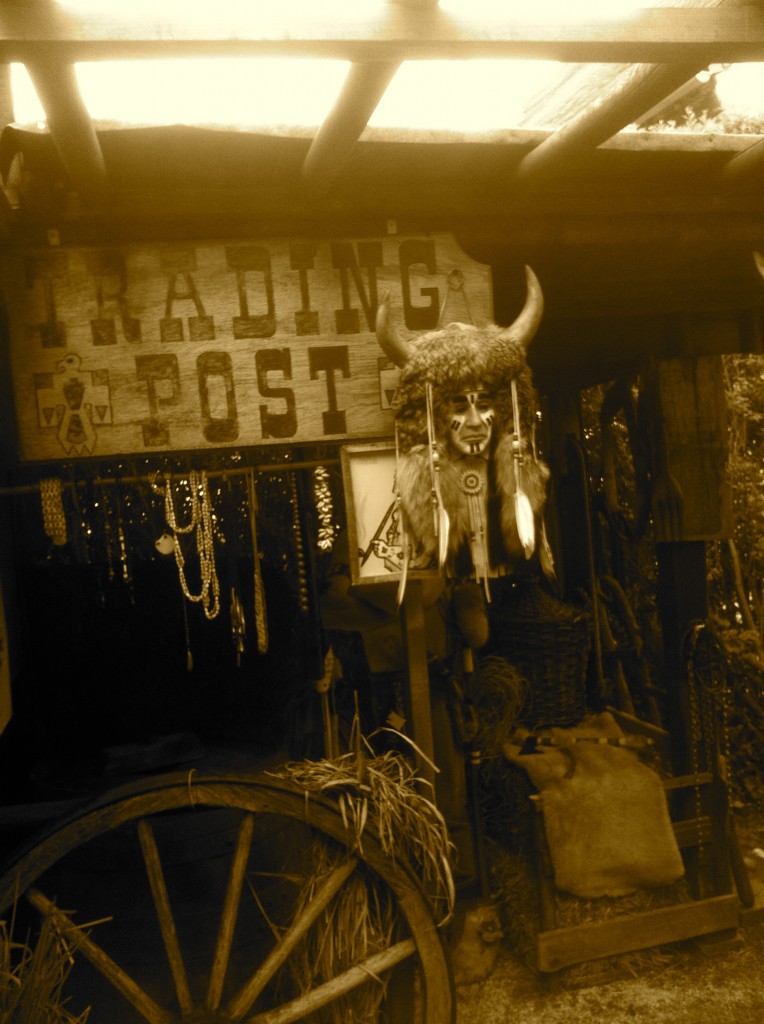 That was 25 years ago. Since then, our host read a lot of books, watched a lot of films, and took many trips throughout North America. These trips always included an extra suitcase, and tape and boxes and post offices; as Gerhard spent as much time shopping as he did sightseeing. He built a saloon in his backyard, but he built the rest of the town too. His backyard is Old West correct; with a saloon, trading post, a couple of cowboy houses, a Cantina, a smith shop, the entrance to a mine, and a working windmill. No kidding. All life size, but all mini; and the one man built the whole thing! Down to the smallest details. He’s got hats, winchesters, widowmakers and peacemakers, saddles, cactuses, iron skillets, Wells Fargo signs, animal skins, WANTED signs, railroad nails, railroad stock certificates, negligees, leg lamps, beer bottles, whiskey bottles, bear traps, indians, a teepee, scalping knives, dream catchers, grain sacks, a cowboy graveyard, covered wagons, a saloon piano that still plays recordings, a poker table, belt buckles, and civil war bullets. (I appologize this itemized list was a bit jumbly and not very organized. His backyard is more organized than my list.) There was more to marvel at than I could consume in one evening. 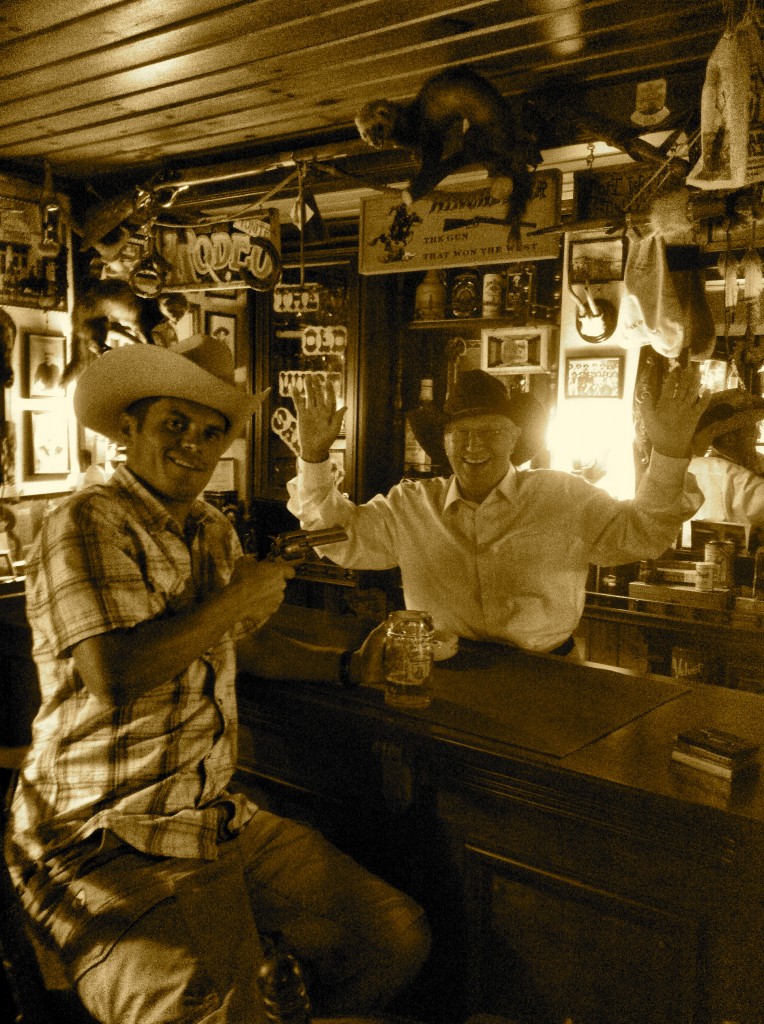 It is the most impressive thing I’ve seen while traveling yet, and this is for one reason only, because it was built on the desire and dedication of a single man. He had a passion and turned it into his real life in his own backyard.

Now in response to some of your immediate reactions:

Yes, this man is married. And he and his wife seem to live a normal life outside of his Cowboys and Indians obsession.

They do have a nice side porch, so they can entertain and enjoy the outdoors without an old west setting.

The rest of their house was totally normal, with the exception of the two rooms that are now dedicated to Gerhard’s next project. There’s a toy cowboys and indians world that is underway; being built with figurines, real sand from Death Valley, and actual chunks of Borax.

Dinner that evening was wonderful. We did not eat beef, as a cowboy would. We ate pork, as a German would. We had an afternoon of coffee and cake, followed by an evening meal of pork shoulder with dumplings, gravy, and pickled vegetables. There was ice cream for dessert.

We drank German beer with dinner, but the after dinner drink was whiskey, neat, by the fire, with a serenade of classic cowboy tunes on the cassette deck.

Sorry, No, this man’s backyard is not open to the public. Invite Only. Lucky Me. I will treasure that Saturday evening for years to come, and use it as fuel to fire my own enthusiasm for my country’s history.