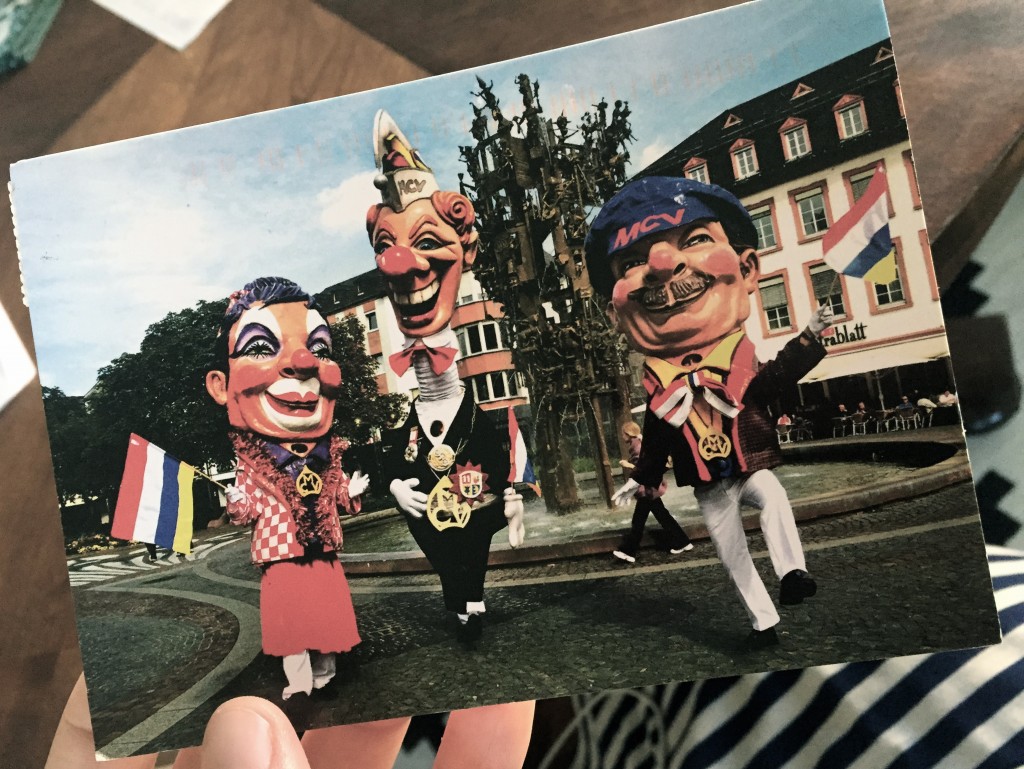 Today’s postcard comes to me from Mainz, Germany. As it stands, it will serve a dual purpose taking us to the city of Mainz, but also through the world of paper mache. 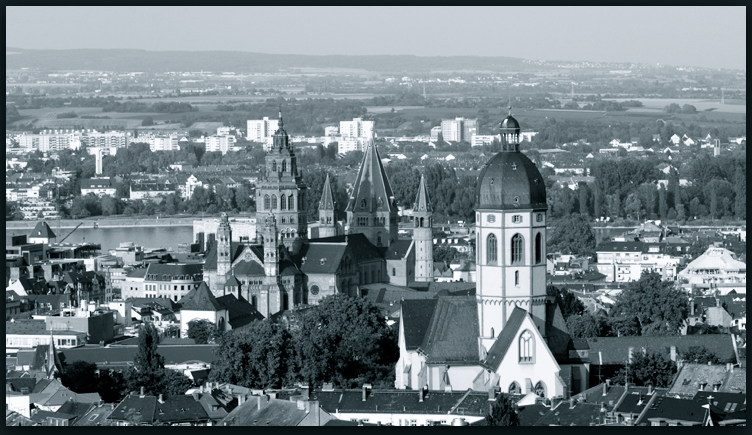 Mainz is located at the convergence of the Main and Rhine rivers in Germany. The city is famous as the home of the invention of the movable-type printing press. The first books printed using movable type were manufactured in Mainz by Johannes Gutenberg in the early 1450’s. A Blacksmith, Goldsmith, Printer, and Publisher; his invention played a key role in the development of the Renaissance, Reformation and the Age of Enlightenment. This one invention spread learning to the masses.

Mainz is also host to one of the largest Carnival celebrations in Germany. In German the word for Carnival is Faschings. In Mainz they celebrate Fastnacht. And much like Brazil, Nice, or New Orleans there is a city wide celebration in the days before Ash Wednesday. In addition to the parties and the parades the carnival here places emphasis on political and literary humor.

In the postcard you see three gentlemen dressed in costume standing in front of the Fastnacht Fountain in Mainz. These particular characters are known as Schwellköpp. This word literally translates to mean swollen head. These oversized, swollen heads, weighing 55 pounds, have been the highlight of the Mainz Carnival since 1927. Needless to say, there is a special club of extremely strong men that carry on this backbreaking tradition. I wonder how much beer those guys can drink and still manage the weight and balance of their ensemble.

So, the postcard also got me thinking (and Internet researching) about paper mache…the French words for chewed paper. The basic definition of paper mache is any kind of pulp held together with any kind of adhesive. Versions of paper mache date back to ancient egypt. Interestingly, in 19th century America there was something known as the paper canoe. Literally it was a very successful canoe made of paper mache. The same guys that made these boats, Water & Sons, also manufactured observatory domes out of paper mache too.

Modern uses for paper mache have since declined to arts and crafts, as the material has been replaced by modern plastics or composites. But I did find a few artists keeping the tradition alive and well.

There is the Ultimate Paper Mache website, hosted by Jonni Good since 2008. She’s got great projects, tutorials, and galleries to view. Jonni has also illustrated/written a few books, so there are some free downloadable color pages of endangered animals if you’re interested.

I also found Dan Reeder of Gourmet Paper Mache. Like Jonni, paper mache is his foremost passion. If you like dragons and unipossums he’s your guy. What’s a unipossum? It’s an opossum crossed with a unicorn of course. I found his blog post titled Rum and Paper Mache most amusing.

PS…Don’t forget that I am just home reading, eating, and napping. If you are out in the world traveling I’d love to receive a postcard.