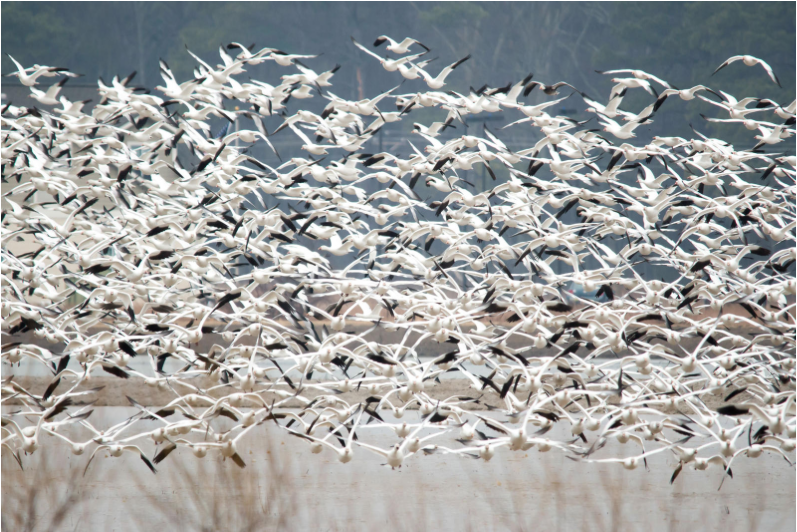 As I understand it, snow geese are seen in large numbers or not at all. They breed in the far north. (north of the timberline in Greenland, Canada, and Alaska) And like most sensible beings, they winter in the south. They will travel as far south as Mexico.

The snow geese migration back to the north passes through Middle Creek Wildlife Management Area in Pennsylvania. It isn’t far from where I live. This year the migration has already begun. Even though it is a few weeks earlier than normal (thank you global warming) it is no less of an exciting event. The babes and I went to Middle Creek today to catch a glimpse of the action.

It was our first time to this particular park. I was hoping for a midsize lake brimming with geese, one parking lot, and a lovely trail around the shoreline. I had visions of the three of us strolling along the lake, pausing to look at the thousands of geese. The girls would be thrilled to see so many birds at once. They’d be captivated for close to thirty minutes. We’d be hugging, laughing and pointing as we gazed upon the majestic annual event. After which we’d frolick on grassy knolls, maybe have a snack, and catch some sun before we hopped back into the car to cruise home.

What actually happened fell a few inches short of the pin.

I found the park easily enough; and you can’t miss the lake because it is huge. It’s the finding of the geese that’s the tricky part. They are not a stationary mass of birds, and their location is not always obvious. The lake area had roughly 5-10 parking lots scattered around it. And likewise, roughly 5-10 hiking trails in and around the lake not always necessarily headed to the lake. I parked in the visitor center (which was closed!?!) parking lot, got the stroller out, got the girls out, and headed off to find the geese on the lake. I found the lake, we saw a goose, and in the distance I spotted what we had come for…a white mass of birds hundreds of yards away on the other side of the lake.

So we trecked back to the car, got back in our carseats, put the stroller away, and drove off in an attempt to find a parking spot, and trail, closer to the action. We were definitely not the only spectators on the lake today, nor were we the earliest. As I rounded the western side of the lake I could see some action. Not bird action mind you, people and automobile action. This tiny wildlife refuge parking lot resembled opening day of the state fair. It was overflowing and automobiles were parked on the side of the interstate for a quarter mile. The rangers were out directing traffic. It took us a while, but the girls and I got a sweet spot, got back into the stroller, and made the short treck through woods and marsh to the water’s edge to join the hundred other people in watching the snow geese do their thing. That’s right. We finally got what we came for. The girls and I watched a couple of thousand geese float on the water all at the same time. Unfortunately it was a bit less climactic than I had hoped. And it held the girls attention for all of thirty seconds. They were much more interested in staring at the wildlife photographers with their enourmous telescopic lenses and funnny hats and fishing vests, than the damn birds. In fact, I’d venture to speculate that the geese found the crowd of humans as intriguing (if not more) than the humans found them.

So our experience looked more like this than the top photo.

We stood on the lakeshore for a total of two minutes and then began to take our walk back to the car. The girls walked themselves the entire mile to the car. Forget the geese. This walk was the best part of their day. They got to walk all the way by themselves! No mom holding their hand. They approached (and sometimes pet) close to ten dogs! And I didn’t count, but I’d venture to guess they were greeted by close to 50 people. They tripped a couple of times while trying to run, found some rocks, picked up a few sticks, put it all in their pockets, and even touched a few dirty napkins and tissues on the ground.

In all it was not a day wasted.

They are learning about the world. And most imortantly, learning that there is no length to the ends that their mother will go to in an attempt to find unique activities to enjoy.