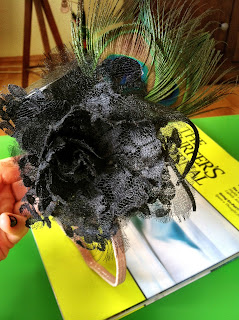 It’s cool when you get to be one of the first people in the world to celebrate a holiday. It is particularly fun on New Year’s Eve. This year I enjoyed stepping into the new year six hours ahead of most people I know.  Doubling my pleasure was having my morning coffee and receiving messages from a few people who were apres partypartying. Even though my holiday was over I still had the excitement knowing that my friends and family were in the thick of it.
I had a holiday split this New Year’s Eve. First I went to a party at a girlfriend’s house, but I left by 11:30. I welcomed in the New Year with my neighbors. From their top floor balcony you can watch a spectacular firework display to mark the slide of Germany into 2013.
Let’s start with the house party first. It was a theme party; and for this I was grateful. I like getting dressed up for parties, but I also enjoy not taking myself too seriously. The theme of the party was Pho Glam. Party goers translated this into understanding that we would all come dressed in our most desperately unappealing (and cheap) attempts at New Year’s semi-formal wear.
I have been developing a desire to purchase a top hat for some weeks now. I have been looking in thrift stores, at Christmas markets, and on websites. I had never quite found anything to jump out at me. I was browsing Etsy recently and saw a mini top hat on a headband; made by a crafter who used a cereal box as her base. She then covered the cereal box with fabric and accessories. That is when the light bulb went off. I decided to make my own hat for the Pho Glam Party. I wanted my hat to be festive, cute, obviously handmade, and a little silly. Here’s how I did it. 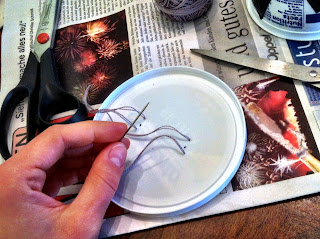 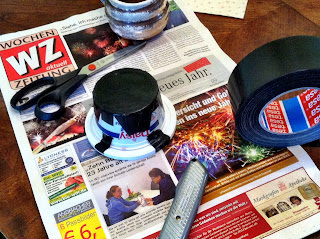 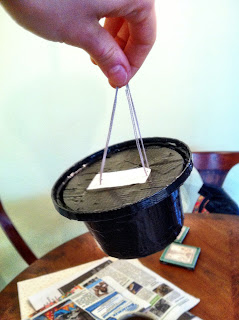 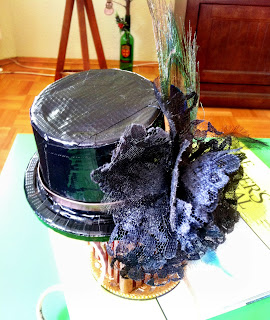 If you’re gonna copy me you’ll need a small sour cream container (preferably not fat free) and a larger plastic lid. (I used a 32 oz. ricotta cheese container.) You will also need black duct tape and decorative accessories. Oh, and a string and needle to be able to tie the hat to your headband.
The Party was a blast. My absolute favorite part of the party was when a new guest would enter and we’d all stare to see what she was wearing…and it wasn’t considered rude because it was (like) a costume…and we’d all whistle and cat call. My second favorite part of the party was drinking champagne, well sparkling wine. It is such a treat; especially in Germany. You can get a stinkin’ good bottle for $3.00. After all of the guests were present we voted to see who’s outfit was the best. I gotta tell you; credit went where credit was due. I don’t know my friend found this dress, but it rocked. I was pretty jealous. It looked exactly like something my Malibu Barbie could have worn, and she had the eyelashes to match. 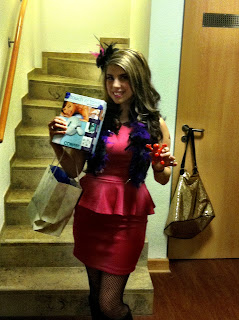 The rest of us Runner’s Up looked pretty fun too. 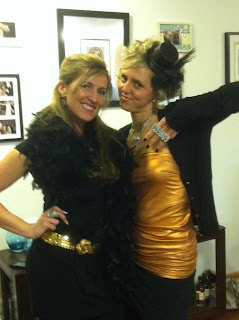 As this first party was just heating up I was donning my jacket in preparation for my next celebratory activity; fireworks with Katharina and Ludwig. My house sits on a bit of a hill and we can see the town of Ansbach below. At exactly midnight it is a German tradition that (almost) every single person light off as many fireworks as they possibly can, for as long as they can. The noise and light and heat are said to ward off evil spirits and bad ju-ju from 2013. My fellow guardians of the new year did a fabulous job last night. I was standing on the balcony in complete awe. I have never seen a firework display so amazing. They were everywhere. It was beautiful, and it went on for almost ten minutes. Prior to New Year’s Eve fireworks are for sale everywhere; and everyone is buying them by the trunk load. Even in witnessing this, I could never have imagined the site I would behold at midnight…too cool. The most endearing part about it to me is that, essentially, this is something that the community gets together and puts on themselves. It is not part of the city government’s budget, or some professional ordeal involving a license and money and parking and rules. In Germany people are just doing it for themselves. I am really excited for next New Year’s Eve already.
[fblike]