Skip to content
Last night I attended an opening for the newest exhibit at the Kunsthaus at Reitbahn 3 in Ansbach.

It was one of the best exhibits I have ever attended. It was easily the most professional graffiti show I have ever attended. The gallery was quite spacious and the work was excellent. The event was kicked off by old-school DJ Steady Groove and each of the three artist spoke about their work and the show. I was so impressed with the show that I listened very intently. I was trying to pick up as many words as I could, to better understand what this show was about. The introductions lasted an hour, so I was getting the feeling that something more important was happening than I could understand.
Once the speeches had commenced, and a few more scratches from the turntable had been delivered I decide to introduce myself to the DJ. I noticed he spoke a bit of English; so I figured he might give me some more info. As it turned out he is an ex-army guy and he’s been living here since the eighties. Score! He told me more about this project.
Art Suspect is the culmination of 12 years of work by German graffiti artists, most of them living in this area. It has been their intent to clean up graffiti and turn it into the respected art form they feel it should be. They see it as more than scribbling your name illegally on public property. (although that will forever remain its roots) All of them are fabulous artists that create beautiful images with color and shapes.
Three artists were featured here, but the city of Ansbach has commissioned over 25 graffiti artists to do work around the city. The artists have formed a coalition (of sorts) called Urban Impressions. Urban Impressions is also the name of the city’s graffiti art festival. A route has been mapped out so you can walk the city and tour it’s graffiti. Here it is:

Now, you know that I think this is absolutely the best idea ever. This allows me to enjoy graffiti without feeling guilty for condoning illegal activity. As I have stated before, I am attracted to graffiti for many reasons, but I have never been about defacing public property. Also, if you are familiar with my work you know that I use spray paint in most of my paintings. I use spray paint with more of a stencil application; which is why this guy is my favorite local artist. 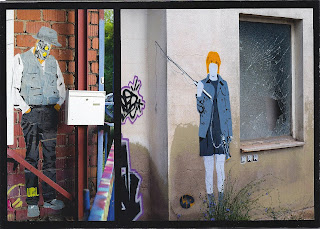 His graffiti name is UPAL, and he is 21 years old. How jealous am I? He’s 21 and scoring tons of public commisions. When I saw his name and stats in the program I thought his birth year was the year that he started to graffiti. (Man I’m getting old.) If you’ve seen my FB photos you have seen other examples of this guy’s work. 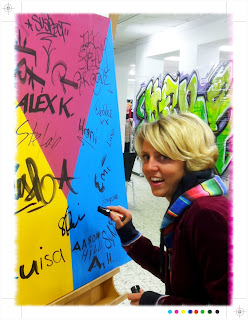 Before leaving I left my mark. Who can resist fat markers?