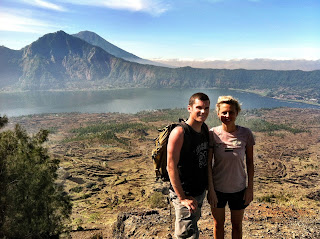 Saturday was epic. We went exploring outside of Ubud with a private driver, Dewa. He was hired by the hotel for us; and he was perfect. Our first stop was the Batur Volcano. The top is over 5,500 feet. Dewa set us up with a guide to hike to the top. You can not go without a guide. Most people make the trek before the sun comes up; so they can watch it rise from the mountain top. Phil and I weren’t interested in waking up that early. In hindsight it was a decent plan because the trekking trail is quite crowded at predawn. Technically we got a late start, but we had the trail to ourselves. Mari was the name of our guide. On our way to the top Mari showed us a bunch of interesting bits; like eucalyptus plants, fresh mint, and other vegetation. The volcano is still active so we checked out a few steaming sulfur holes too. We accomplished 75% of the climb in 45 minutes. Mari said it normally takes 120 minutes. He claimed to be impressed by our fitness. This compliment motivated us to not rest for too long so we could get to the top and have more time with a better view. From the top you can see all three craters of the volcano. You can also see where the city was; that was covered in lava during the last eruption in 1968. It covered the city of Batur; which is how the volcano got its name. In addition you could also see to lake Batur with it’s fish farming and boating. Tiny neighborhoods of workers dot the lake’s beaches. After a couple of photo-ops we we walked back down the volcano. Mari allowed us to return down the back way; although it can be more treacherous. This route led us along the top of all the craters and down the side of black sand. It was steep. We had to run almost the entire way. If you stop in the sand to walk you just start slipping and falling. It was crazy. You could almost surf it. It reminded me of a previous adventure we had at the dunes in Arcachon, France. Although these sand piles were much bigger, steeper, and blacker. Once we reached the bottom we had to take our shoes and socks off to empty them of all the sand they had collected. As I said it was black, and very fine. We could shake it out, but we couldn’t rub it off. The rest of the walk back to base was more like a leisure walk. We went through farms of tomatoes, pumpkins, and green onions.
After the hike we drove to a hot spring. Our hotel had packed our breakfast and we ate it in route. In Bali (and probably many parts of Indonesia) they have Jasmine tea in juice boxes. It is one of the most delicious beverages I have ever enjoyed. As we dined we asked Dewa a slew of questions about Bali and its customs. He was much more talkative than our driver from the previous day. He told us the meaning behind the flag, and the gingham. He also spoke of the shrines and temples, and daily life. A typical Balinesian wakes up at 4:00 to get his/her day started. The matriarch may return form the market as early as 5:00 to complete her cooking before she goes to work. I wanted to know what time they go to bed. Dewa said around 22:00. I was impressed. If I go to bed at 22:00, there is no way I’m getting up before 6:00. Dewa claims it’s easy to get up so early in the morning because everyone looks forward to the Bali Special Breakfast. “What’s that?”, we wondered; thinking it must be pretty outstanding for one to anticipate it as early as 4:00. “Coffee and a cigarette”, Dewa said. We all laughed.
The Hot Spring was nice, but maybe a bit of a tourist trap. It was $40 for 45 minutes; one of the more expensive things to do in Bali. The Springs had an absolutely gorgeous view though, and a delicious complimentary beverage. At the height of the day’s sun, we sipped tamarinda juice from a swim-up pool bar, while floating in an outside hot spring, listening to falling spring water and birds, and enjoying a bit of people watching. It was terribly indulgent. But considering we hiked over 5,00 feet and back, with the sun beating down and under the attack of sand, we figured we deserved it.
On our way back from the hot springs we chatted more with Dewa about Bali agriculture; and in particular asked him about Bali coffee. That’s when he asked if we had ever had Luwak coffee. Nope. What’s that? He began to explain it to us, (as I will to you momentarily) peaking our interest in some nearby plantations. He offered to stop at his favorite farm, so we could get out of the car, maybe grab a Special Breakfast, and see local coffee and spice manufacturing. We accepted the invitation. 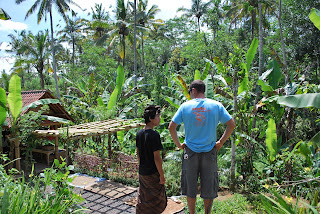 Dewa took us to Satria. It is a plantation, just off the main road, that grows coffee, vanilla beans, chocolate, cinnamon, cloves, pepper, tamarind, turmeric, fruits, tobacco, peanuts, and raises Luwaks. Luwak, there’s that word again. What are they? I’ll get there.
As soon as you arrive you are greeted by a guide. He takes you through the plantation and points out all the different plants, what they are called, and what they are used for. After the fields you get a mini tour of production. You go through the huts that are drying the nuts and seeds. Then you go to another tent with a massive mortar and pestle, an open fire pit, and a little old lady roasting coffee beans in an iron skillet over flames. It was an impressive sight; very primitive and romantic. I can’t imagine that it is actually the way everything there is manufactured; despite the sincerity of our guide. I think it is just to impress, but I didn’t care much. I loved it and appreciated the theatrics of it. As a visitor you can grab the huge mortar and grind beans in the life-size pestle. It was fun.
It is at this point in the tour that you can meet the Luwaks. They are small furry creatures that are only found on the island of Bali. They sleep all day. At night they wake up to eat. What’s their diet? Coffee beans. They eat the coffee beans off the plants. The bean travels through their digestive system. They absorb it’s caffeine and get their nutrition. The Luwak’s body never actually breaks down the coffee bean. It passes it after using it for what it needs. What is left is a coffee bean with less caffeine, a full bodied flavor, and extra nutrients and enzymes from the animal. At the plantation, farmers walk around “cleaning up” after the Luwaks. The coffee beans are removed from their excrement, washed, roasted, ground, and packaged as the most expensive coffee in the world. In America Luwak coffee can sell for $50.00 per cup. Here at Satria it was $4.00. Would you drink it? We did.
After the tour you sit down for your tasting. Phil and I sat at the end of a long picnic table under a thatched roof; perched on the crest of a hill in the middle of a plantation jungle. A young woman came over to us with a large tray full of coffee and tea samples. I think there was probably about 15 (in all) for us to taste; coconut coffee, chocolate coffee, vanilla coffee, red rice
tea, hibiscus tea, spice tea. It would be a miracle if I could remember them all. Of course in addition to all of these samples we ordered a cup of the Luwak coffee. Also on the table were large jugs of delicious fresh roasted peanuts covered in coconut paste and fried, fresh tobacco, and rolling papers. The girl that brings your beverages can also hand roll you a complimentary cigarette. Would you smoke it? We did. 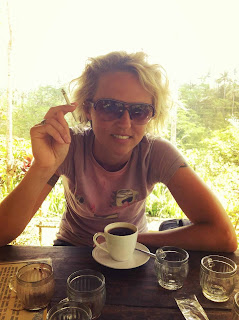 The way I look at it is if you’re going to drink coffee from beans that were salvaged out of poop, you might as well have a cigarette to wash it down. You never know if you’re going to have those opportunities again. Phil joked that we were actually able to indulge ourselves in the Bali Special Breakfast.
We were home by 14:00. That was plenty of time for us to continue winding down until dinner. We headed out to the spa for a 60 minute massage for $20; complete with hot tea and jasmine oil. Phil and I were in the same hut. The girls gave us a pre-massage pedicure with coffee grinds and coconut. For my masseuse it was just another day at the office. But Phil’s masseuse; poor girl, she was working overtime. The heels on the feet of a soldier are no joke. (I think Phil would need a pedicure everyday to keep them normal.) It’s in almost as bad a shape as the back of a pilot. Unfortunately for Phils’ masseuse; he’s both.The masseuse’s torture was well worth it. We left there feeling like a million bucks.