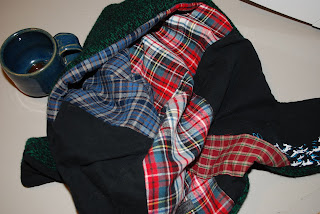 So I’ve recently started to make hoodies not just for women, but for men too. For some reason a lot of them are ending up with plaid in them. I love plaid and know other girls that do too. Why am I more inspired to use it for men? In this particular piece that I just finished I used a triple plaid combo. What I am finding is that it’s never too much. Here the potential over use of print is balanced by the dark wool sweater on the outside. This style of hoodie is my warmest yet.
My recent escapades with plaid prompted me to do a bit of research on the subject. Here’s what I found:
In America we call it plaid, but everyone else calls it tartan. Its origins date back to Celtic populations from around 100BC to 400BC. Tartan was made most useful by the Scottish to identify clans, or different regions where people were from. Color used in dyes had a lot to do with this. With punk music in the 70’s tartan became an anti-establishment symbol. The youth of the British Isles wore this fabric to voice their disgust with the ruling class. In America, plaid is apparenty associated with the hipster movement. Since these kids shop at thrift stores, and there is usually an abundance of plaid shirts at thrift stores, the print has come to represent their movement as well.
What does this mean for Florida Scarf? Nothing, but I’ll keep using it in the pieces. Hopefully it will add character and warmth.