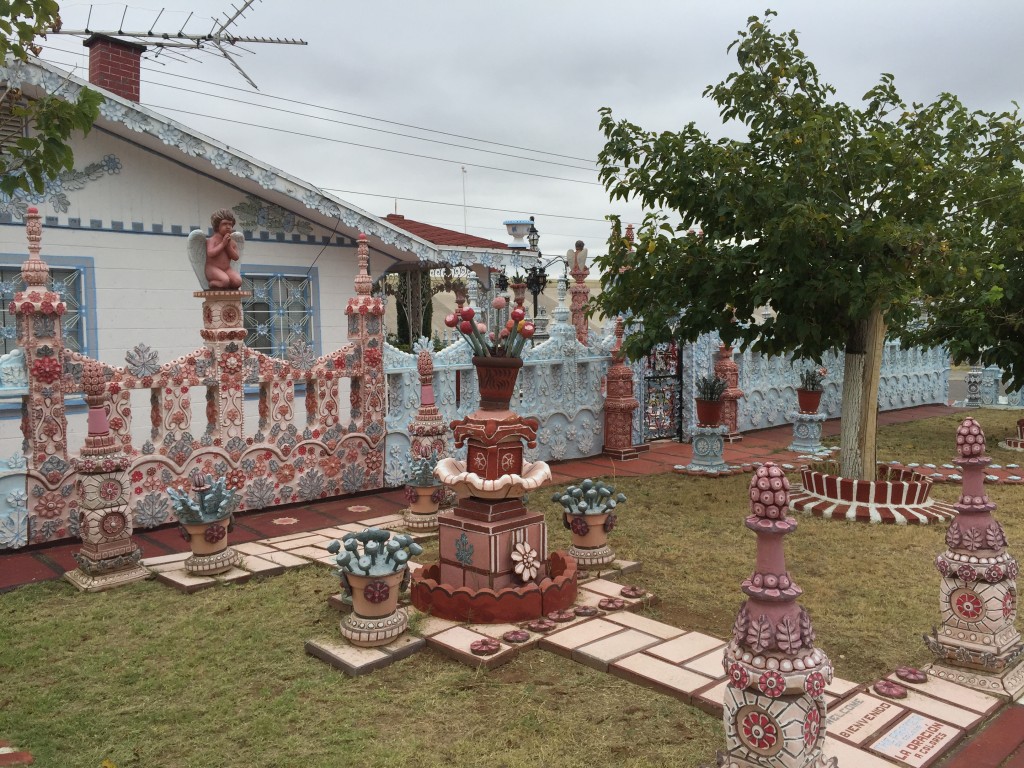 Normally I use this phrase to categorize grafitti on my Pinterest boards. Today I use it in a broader sense to introduce an amazing house here in El Paso.

The house is on the corner of Leavell and Gateway South, 4302 Leavell to be exact. It’s just under the westbound side of Highway 54; a little house with a lotta heart. A diamond in the rough you might say, as its creative brilliance shines above the concrete, dirt and dismay of its surroundings. If you live in El Paso you know this isn’t the nicest section of the city. 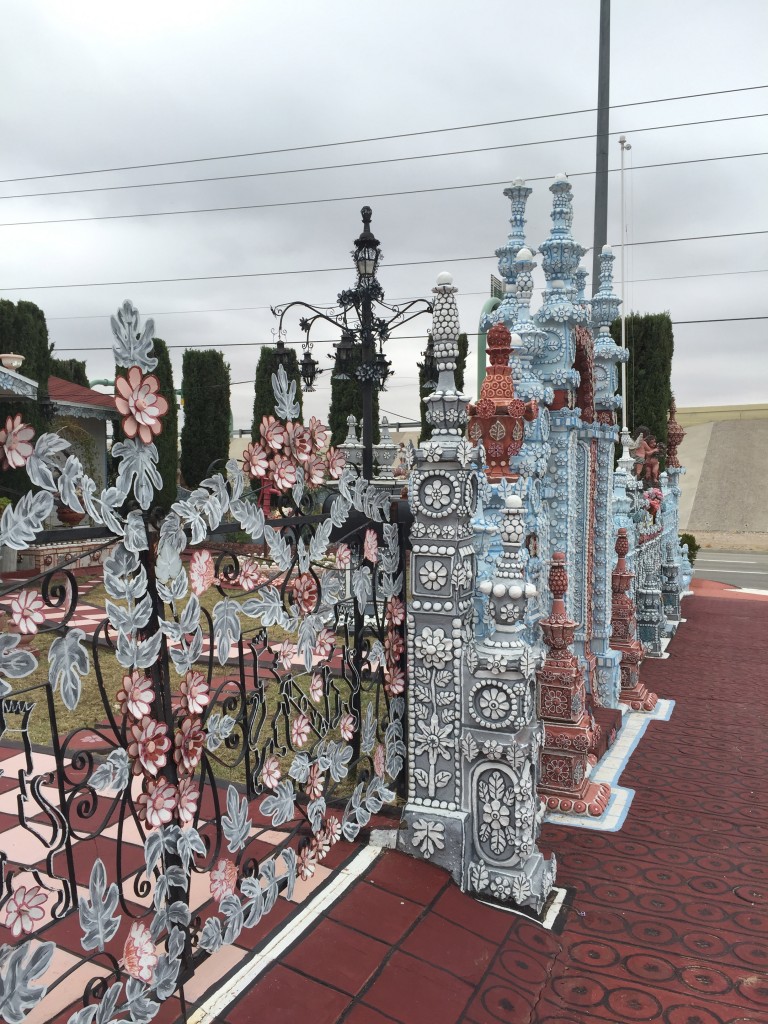 I spotted the house my first few days in town. I have a sixth sense for street art and an eye for the aesthetically extraordinary. Each time I’ve driven past it I stare from the highway, promising myself a closer look. Today I was in the car and the babes were at home and I told myself it’s now or never. 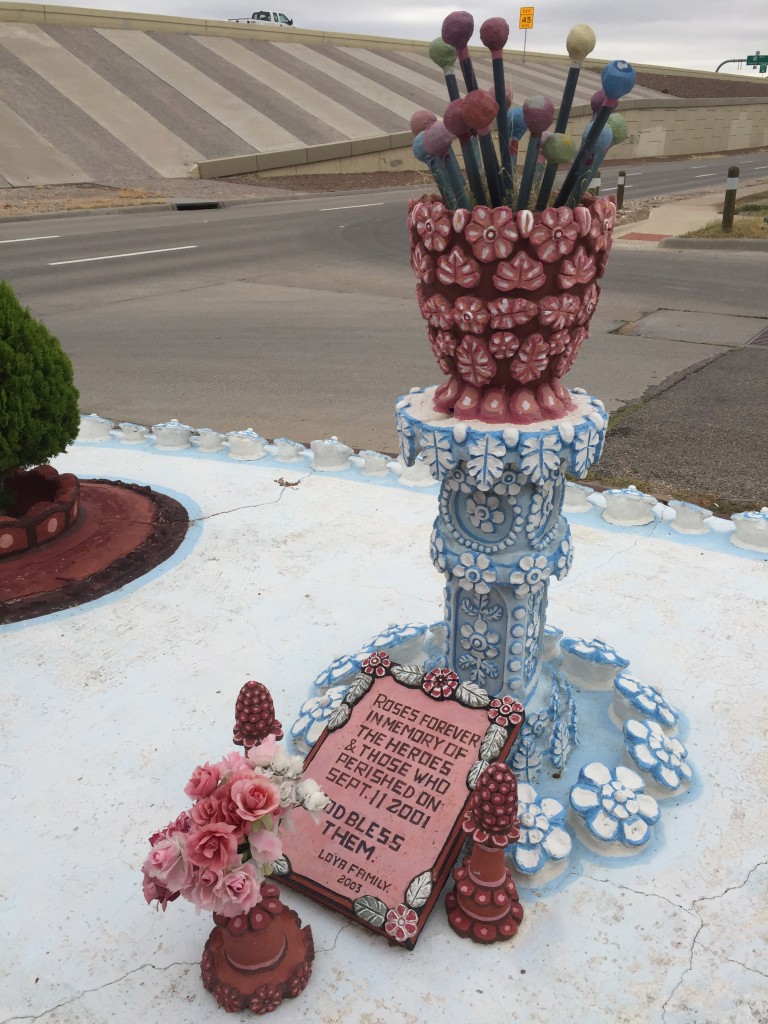 In viewing the house up close I realized it has so much to appreciate; much more than you can see from the highway. I was incredibly glad I had finally taken the opportunity to appreciate it. From the highway it looks like a house with an ornate fence. Once on the property you can see it has a fence, yes, but also a collection of fountains, lamp posts, and shrines.

In doing a bit of research I found an article about this house on the visitelpaso.com website. This house was built as a tribute to the people of Juárez and El Paso by Rufino Loya Rivas. He showcases what’s great about America and immigration. It’s a tribute to the border. He was a mexican immigrint who worked in the Levi Strauss factory of El Paso before it closed. Loya was born in Juarez in 1933. He came to the US at the age of 29; initially to California but later settled in El Paso. He bought the house at 4302 Leavell in 1973. He says it was ugly and surrounded by dirt. He made a promise to his wife to turn it into something beautiful.

I love this house for being the quintessence of pubic art. It’s as intricate, ornate, and pleasing as any commissioned monument or church but it’s someone’s house.  A simple human designed it from his heart and built it with his hands. It was made not for fame, fortune or celebrity, but for people…Mexicans, immigrants, El Pasoans, all people, to delight and inspire the divine in us. Loya loves the history and architecture of Mexico. He modeled his creation from the cathedrals of Mexico’s colonial cities. Similarly, the art of his property has elaborately carved and decorated flowers, shells, angels, and garland. It mimics the Churrigueresque (Mexican Baroque) chapels with statues and paintings of saints surrounded by sculptural detail. 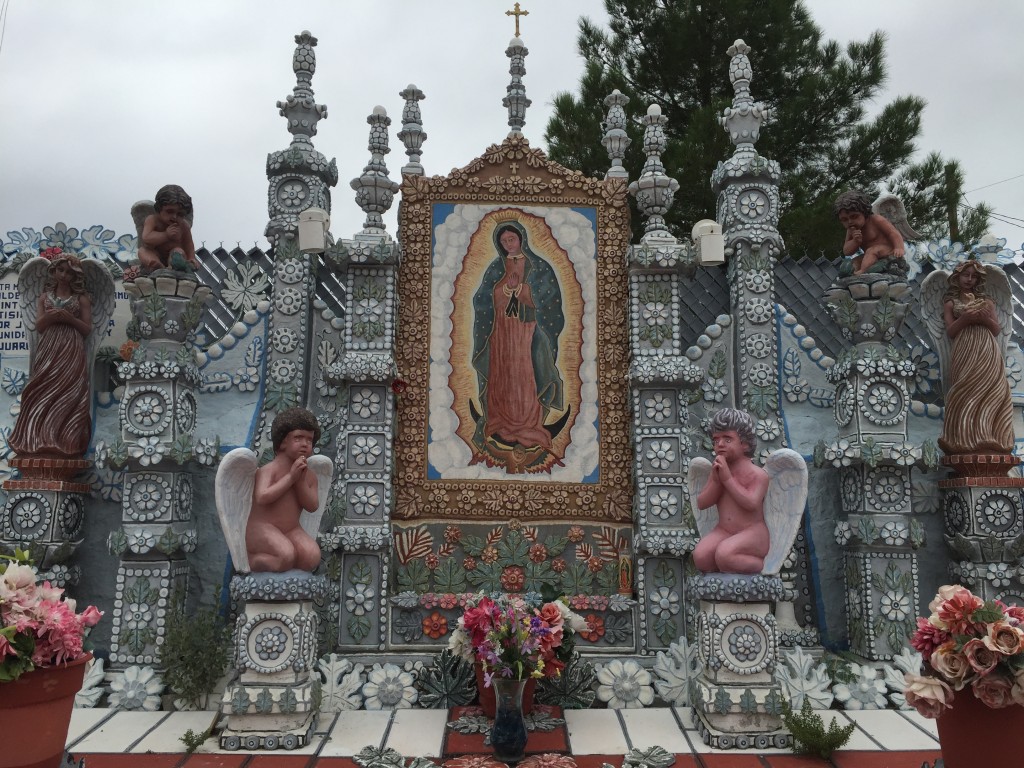 I love that the inspiration for this art house comes from Mexico. Thanks to my mother (who FYI is not Mexican) I love Mexico. I’ve been to the Yucatan Penninsula a handful of times, have studied Diego River and Frida Kahlo, and know the words to Suavemente, but other than that I don’t know much about Mexico. For me it’s a land with a beautiful and mysterious culture, past to present. 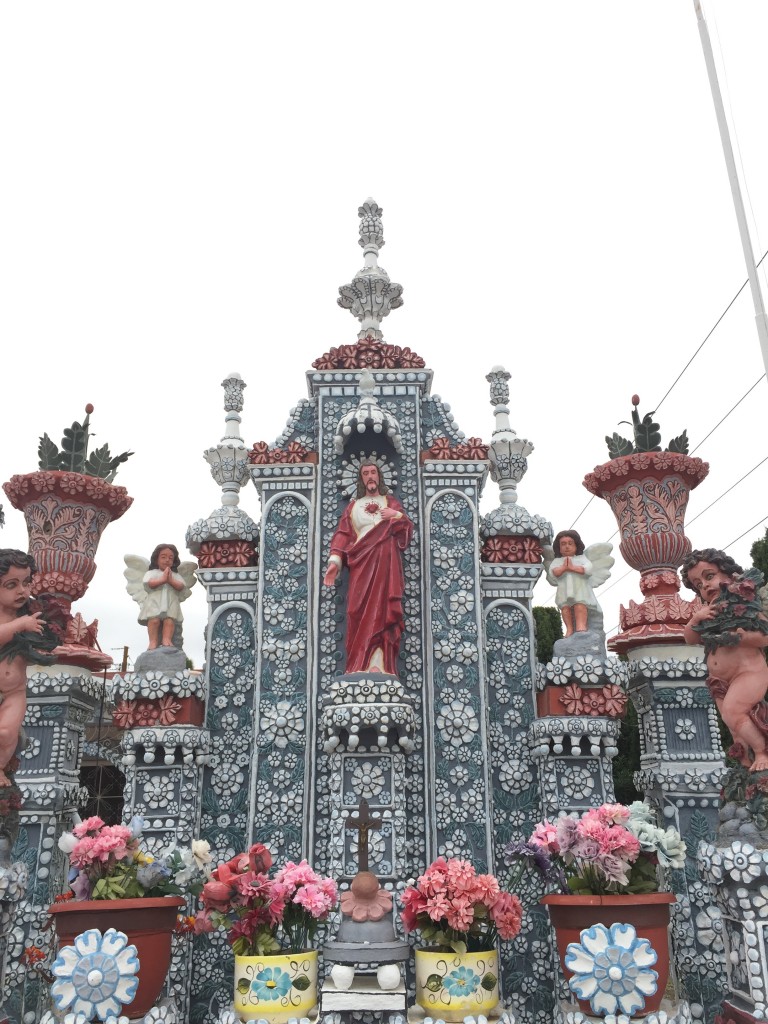 As I’ve said, the man that made this house is not a formal artist and he had no initial master plan. He’s just a passionate guy with a vision. And the fact that his vision and inspiration gradually grew into something this impressive is truly a gift. For me, this art has a touch of mid century style. It also reminds me of a gingerbread house, in a candy land; handmade concrete forms of surprising detail.

His initial efforts were challenging, as this was the first of its kind Rufino had ever attempted. He made a small shrine of an angel on top of a painted brick arch with flowers underneath. He was compelled to do more, and his skill has grown with experience. He forms his cement by hand or pours it into cups and bowls. He struggled with the material at first, but now obviously has mastered it. He built his masterpiece after work, on weekends, and holidays. There is a plaque that hangs in the driveway that reads “God’s blessing and these humble hands made this work of art possible from 1973-1998: Rufino Loyas Rivas and wife.” Imprints of  his hands and his wife’s hands adorn the plaque. His work contiues today with the upkeep of the property. It is an act of gratitude and worship to his community. 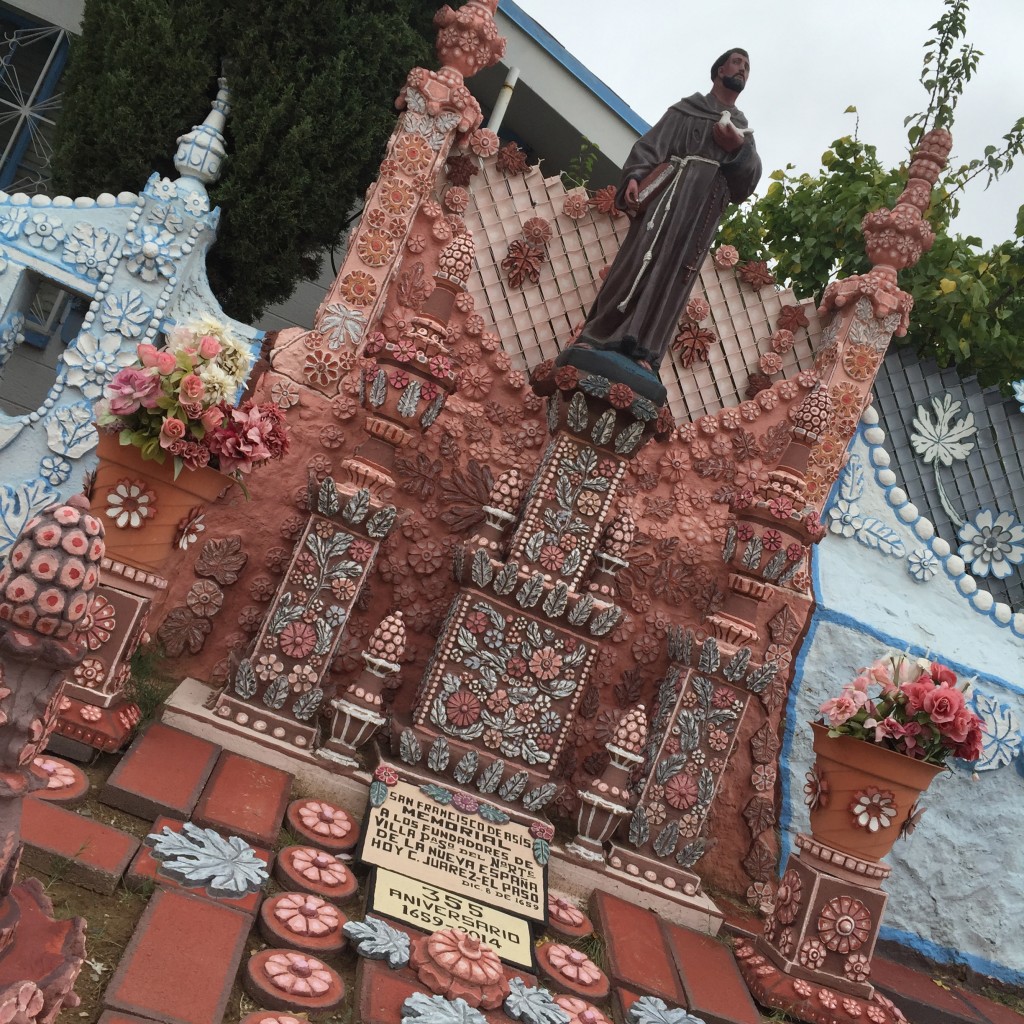 Loya lovingly refers to his property as his Little piece of Mexico. I encourage you to make a stop at 4302 Leavell to experience for yourself what Loya has created. 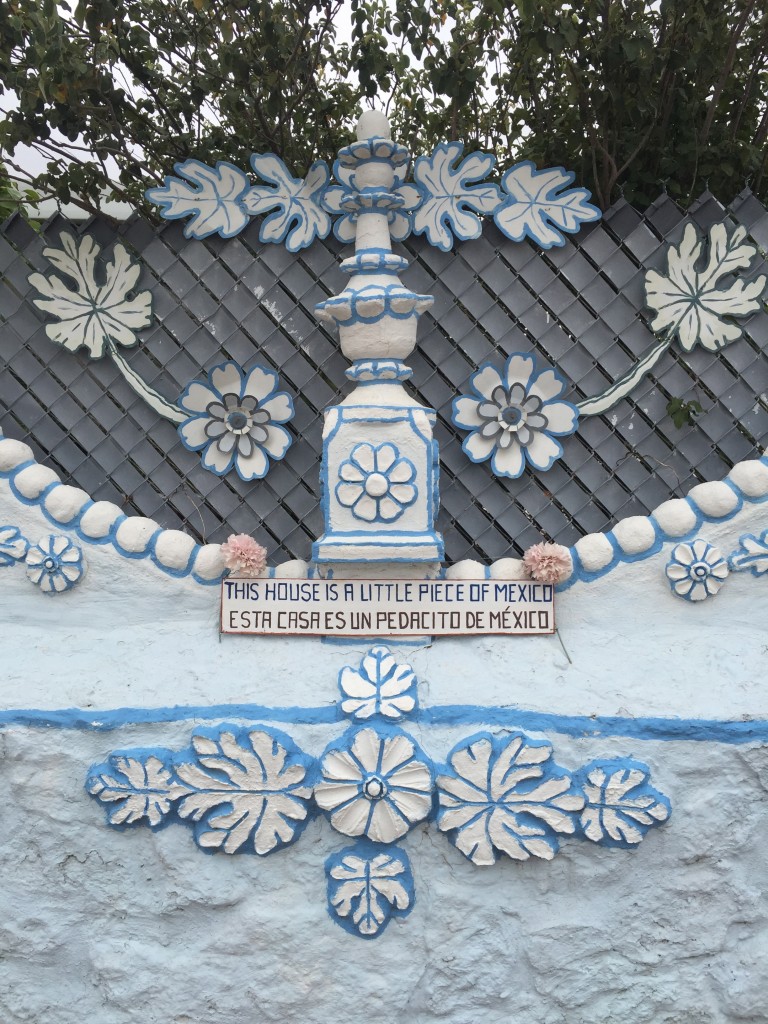