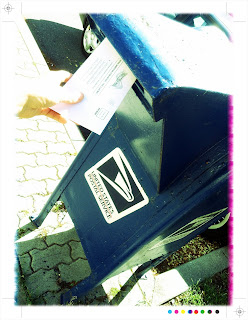 I mailed in my request for an absentee voter’s ballot today. I feel like a whiz since I navigated my way through the process all by myself. (and I’m not a whiz, it’s really easy) Actually, that isn’t totally true. I was prompted to handle the situation from an email I received from the Army with a link to the FVAP website. If it wasn’t for the heads-up I might have missed the boat on the next election.
It’s pretty embarrassing, but I’m going to admit that the first election I voted in was the last election. I had good excuses as to why I never voted the two times prior to that, but really I was just too lazy to register. I think it was pretty typical behavior as a young American. I completely took my liberty for granted and decided to ignore the whole process. I have obviously matured since then.
Living in a new country, in a new part of the world, has helped me to realize how many things in life I was taking for granted. Likewise, being a part of the Army (and thus a part of the government) has tuned me into world news and politics. I find myself consciously making the decision to read the news; and I mean the whole news article, not just the title. I’ll admit something else embarrassing. I didn’t acknowledge news (other than fashion and music magazines) until two years ago. Now I’m open to so much news, about so many different places and topics, I wonder how much I am retaining and what kind of influences it is having on me. One thing it has done to affect me is it has (again) made me realize what a lucky individual I am. I am a free woman with an education, and a voice, and money, and choices. There is very little I fear; and that is more than can be said for 70% (I just totally made that percent up) of the women of the world. I feel important; and I owe a lot of that (if not all of that) to the country I grew up in. (as well as the house I grew up in, but that’s a different journal entry)
Basically what I’m trying to say is, I vote because I can. I pay attention to the news because I can. I participate in life because I can. It’s a waste (of everyone’s time, emotion, and energy) if an individual doesn’t appreciate themselves and those around them. I hope you will vote too; even if it is just out of sheer appreciation for the ability. It’s like eating a lollipop just because the bank teller gave it to you; or having a drink just because someone wants to buy it for you. There are a lot of people that have died and are dying to vote. There are a lot of people that consider it a luxury. I am now one of those people.
And if I haven’t scared you with my political agendas and soap boxes I will be back next time (and the time after that, and the time after that) with actual posts about art and scarves.