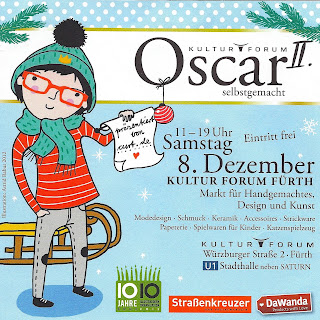 Make. Make. Make.
Talk. Talk. Talk.
Sell. Sell. Sell.
Shop. Shop. Shop.
The Holidays can be so predictable. Luckily, they are only once a year. I miss them when they are not around. I try to take full advantage of them when they arrive. The best way to do this is with an early start. (Man, this sounds like a bad pitch for Black Friday…or Cyber Monday…)
I’m not changing the subject here, but it is going to sound like I am……
What do police, riots, and soccer rivalries have in common with an artist’s market? Nothing. Why do I ask? Because not only was today my first German bazaar in Fürth, but it was also the day (long time) soccer rivals Fürth and Nürnberg went toe-to-toe. As luck would have it; there is a violent history there, and the streets of Fürth were barricaded just in time for our market to open. The buzz around the bazaar was that the soccer game, or the avoidance of the soccer crowd, was going to influence attendance at the artist’s market, severely.
The bazaar was in the Volkshochschule in Fürth. A Volkshochschule is a building of continuing education. Adults go there and take classes on anything from language, to cooking, to yoga. This school plays an active role in its city’s community. So it would only make sense for the school to host a bazaar during the Christmas shopping season. Normally the event is well sought, and has many shoppers. In the past the vendors have benefited greatly. Today I think it was a bit different.
For me it was obviously a victory, as it has been a priority of mine to sell in a German bazaar. (It ranks up there with while we live in Germany I want to ski in the Alps, see Paris, and shop in Italy) I did it. It happened much sooner than I thought it was going to. The whole scenario was pretty normal; despite what I was anticipating. I had no trouble finding the venue; thanks to the GPS. Parking was annoying because it was in the city, but that is to be expected. I am happy it was as close as it was. I only had to schlep my merchandise two blocks. Many of the other vendors were chatty. This was great for getting more (culturally) familiar with my peers. I sold a handful of scarves too; not many, but a few. Could this have been better? Yes. I think my sales would have benefited from a better knowledge of the language. As you know, Katharina came with me, and she seems to differ in this opinion. She seems to think many Germans do not want to be engaged in conversation. They just want to look, and if they have a question they will ask. Maybe Americans like to shop more, and want to be convinced of their purchase. (or wooed) Whatever the case, I believe it was a great start to a relationship between me and the German handmade consumer.
My knowledge of the language got me farther than I thought it would. I spoke to almost everyone that stopped by the table. If I got confused Katharina was there to back me up. Do Germans love Florida? Yes. Have they been to Florida? Yes. Do they make the same joke that Americans do…that Florida is too warm for scarves? Yes. Do they, despite that fact think that my work is lovely, and fun, and colorful, and unique, and awesome anyway? Yes. I think my little scarf business is still in good company here in Deutschland.
I received two other invitations to participate in more handmade markets. I think I will refrain from anymore last-minute sales opportunities. I would love to get more settled in the culture, and more acquainted with the language, and then “sell my socks off.” (as my father in law would say)
Actually, now that I mention it. I did sell my hoodie off today. That hasn’t happened in a while, but it is quite customary for someone to like what I am wearing so much, that they ask to buy it off my neck. I am always surprised, but I always say yes. So anyone that was familiar with my current hoodie (the blue one lined with the bright floral print, with sweater on one side and a fake flower brooch) It’s gone, but not lost. It is owned by a lovely vendor from the bazaar who made very cute items herself (including little knitted rings with shiny buttons for gems.) Her work was pretty adorable. I hope I see her again at another market.
If anyone in this area is interested, there is something called the Oscar Selbstgemacht. Oscar Selbstgemacht is (obviously) a character that makes all of his wares himself, by hand. This character heads up a one-day, indoor, artist market that tours a couple of cities. It will be in Fürth on 12/8 and in Nurmberg in the Hauptbahnhof 12/15 and 12/16. You can find information at www.oscar-selbstgemacht.blogspot.com
The flyer is featured above.
Lots of people today were talking about www.dawanda.de. It is a place, on the German Internet for small businesses to set up shop. I don’t know if my German is ready for this. But my point was to pass the info along to you, my German-American community, in the event you would like to check it out.
I continue to ramble on, about Germany, here.