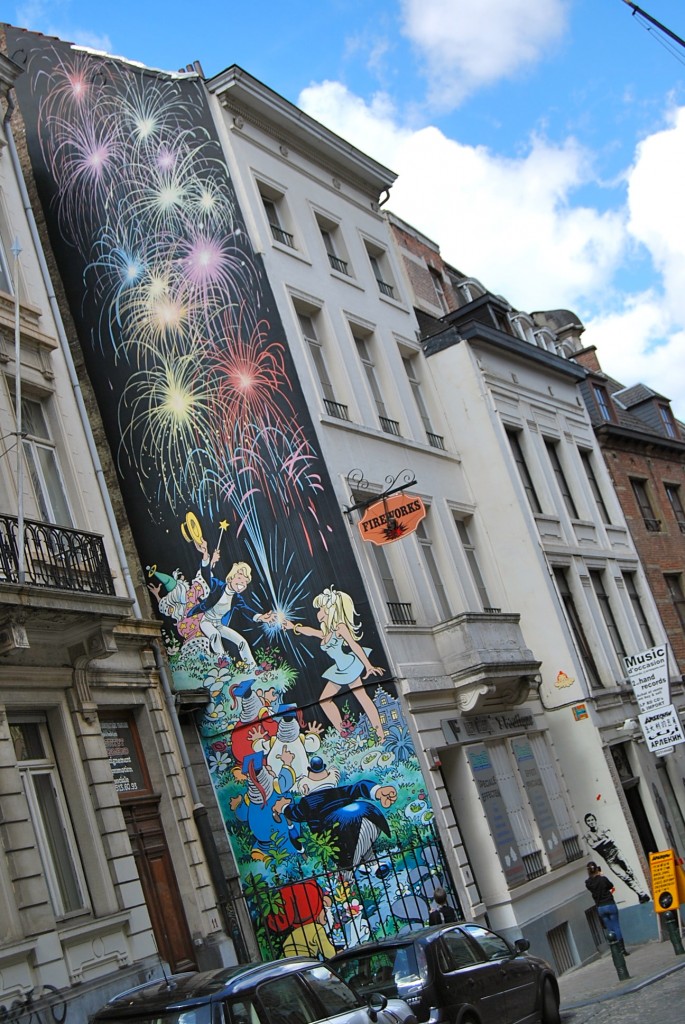 I don’t know much about torture. I’ve never been tied-up, starved, beaten, flogged, had any of my fingernails ripped out, or been mutilated with a small, dull knife. But I did minor in art history in college; and this means that I have sat through hundreds of warm, dark hours of slideshow presentations in a large auditorium with a class of over 300 students and a monotone teacher. I’d have gone out the night before, the lecture being first-thing in the morning, and fight from within the depths of my heart-and-soul to remain awake and attentive, all the while thinking of my family miles away (I was in North Jersey, they were in South Jersey) grinding their bones so that we may be able to afford to send me to college and award me the opportunity of scholarly greatness. No man is strong enough to fight these oppressions. Falling asleep is inevitable.

Only once…OK, maybe two or three times…has an art histrory lecture come along that I found to be truly motivating and worthy of staying awake. The day the The Death of Marat hit the projector screen was one of them. I immediately fell in love with every aspect of this work. Back in these college days, if you had told me that I would one day be in Europe with the chance to visit these works of art in their homes, I don’t know that I would have believed you. But sure enough here I am, and this past weekend I made my pilgramige to Belgium.

For beer and chocolate and music…yes, but also to see this magnificemt work of art in real life. 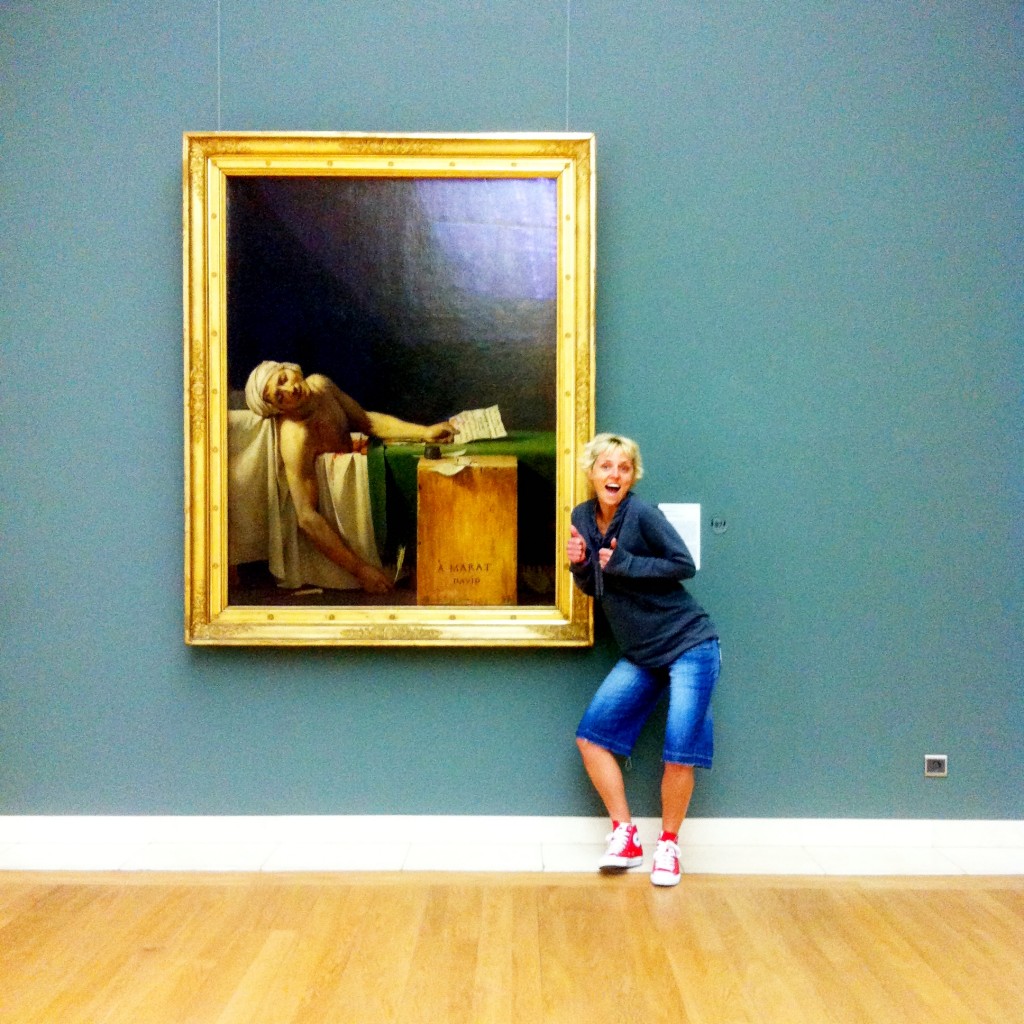 The subject of the painting is a murder scene, but it is the most serene and peaceful of it’s kind. The colors and techniques of the painting are warm and earthly, not energetic and grotesque. Most importantly, the story and characters surrounding the painting come complete with intrigue, desception, violence, and revolution.

If this suffices for you as a good enough explanation than feel free to jump to the next question in the article. If you’d like the long version keep reading.

The Death of Marat was painted by Jacques-Louis David, long-time friend and the leading French painter of his generation. David joined a political club known as the Jacobians during the revolution. He was active in numerous agencies of the reign of terror, and is credited with signing for more than 300 executions. David also painted many great works throughout the revolution, but many were destroyed.

This particular painting, although hidden for quite some time, was not destroyed. It is of the murdered French revolutionary leader, fellow Jacobin, and editor-in-chief of L’Ami du Peuple, Jean-Paul Marat. Like David, Marat was known to be a violent man. So perhaps it comes as no surprise that he was murdered. But what if the murder were in his bathtub?

Marat suffered from eczema, a disfiguring skin disease, and he spent much time in oatmeal bath treatments. So much time in fact, that he would even work from the bath tub. His murderess was Charlotte Corday, a member of an opposing force in the Revolution. She gained access to Marat’s home via a forged note boasting details of a counter-revolutionary front. It is in his tub that she found him and stabbed him. Corday did not flee, and was later tried and executed for her crime on July 13, 1793.

In 1793 the violence of the revolution was at it’s peak. Beheadings at the Place de la Concord were a constant, thanks to Dr. Joseph Guillotine. The Jacobins, the most rabid of the rebel factions, would eventually vote to execute Louis the XVI and Queen Marie Antionette. When the finished work or art was presented to the convention in November of 1793 it received large praises. I wonder if it was not due to the fact that the painting makes this viscious man look more like a sacraficial lamb. I think to love this painting is to realise what the artist accomplished visually despite the truth of the situation.

David was able to create the setting, having visited Marat in this room only the day before the murder. The setting is painted exactly as it was, right down to the wooden packing case that Marat used to work at with his journalist’s pen. It was the day after the murder that David was asked to paint the portrait. He was, or course, honored and wanted to convey both his admiration for Marat and express the indignation of the crime. Painting an idealized figure would better accomplish these intentions than a decomposing, diseased body. Despite the liberties taken in the depiction of Marat, it is obvious he is dying. The weight of his death is visible both in his body and the emptiness that rests above him. His face is gentle, yet suffering. There is an element of peace in the grips of his death, and the dark and light convey both compassion and outrage.

Some speculate that it was the painter’s intent to evoke the sacred iconography associated with the Catholic Church and use it to the benefit of the New French Republic. Marat looks a lot like a Christian martyr in the soft glowing light of this, more contemporary, issue. At the time Catholicism had been outlawed, so the speculation is that David was attempting to replace depictions the saints with revolutionary martyrs.

By 1794 the Reign of Terror had run its course. Luckily for the artist, he would not suffer the same fate as his friend the writer. The Jacobins had begun to execute not only captured aristocrats but fellow revolutionaries as well. Eventually all remaining Jacobins were likely executed or imprisoned. David escaped death by renouncing his activities and was locked in a cell in the former palace, the Louvre, until his eventual release by France’s new ruler, Napoleon Bonaparte. Eventually, Napoleon would control most of Europe, would crown himself Emperor, and would release David in recognition that the artist’s talent could serve the ruler’s purposes. After the revolution, when Napoleon became Emperor of France, David served as his official painter.

In 1846, Baudelaire wrote of the painting, “The drama is here, vivid in its pitiful horror. This painting is David’s masterpiece and one of the great curiosities of modern art because, by a strange feat, it has nothing trivial or vile. What is most surprising in this very unusual visual poem is that it was painted very quickly. When one thinks of the beauty of the lines, this quickness is bewildering. This is food for the strong, the triumph of spiritualism. This painting is as cruel as nature but it has the fragrance of ideals. Where is the ugliness that hallowed Death erased so quickly with the tip of his wing? Now Marat can challenge Apollo. He has been kissed by the loving lips of Death and he rests in the peace of his metamorphosis. This work contains something both poignant and tender; a soul is flying in the cold air of this room, on these cold walls, around this cold funerary tub.”

I use this quote from the famous French poet because he does a beautiful job describing (and praising) the work.

WHY IS THE PAINTING IN BRUSSELS?

As you know, after the revolution David was prosecuted for his atrosities, but with the rise of Napoleon he became a leading painter again. After the fall of Napoleon however, David was forced into exile. He finished out his days quietly in Brussels. In 1886, the family made the decision to turn the painting over to the Museum in Brussels so that it may be appreciated once again. 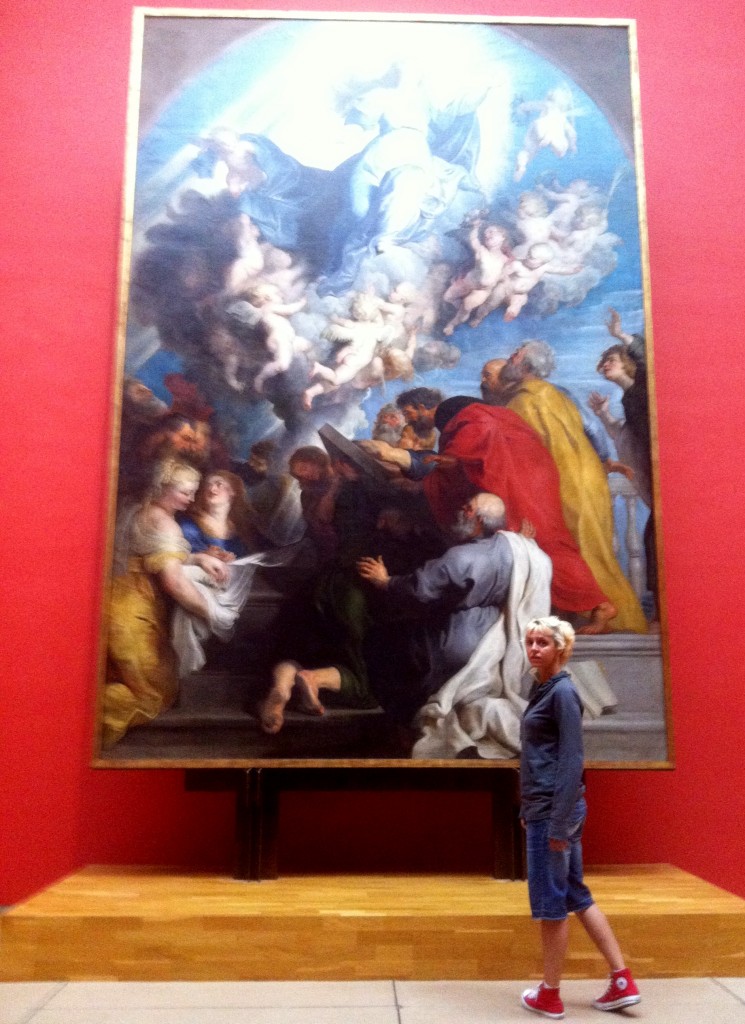 Despite its tortures, I consider myself lucky to have studied art in history. For me there is no finer way to link historical moments than to thread them together with works of art. These (old) writers and painters had such passion. A passion that I sometimes feel my own charmed-life to be lacking. True desires and motivations lay behind their every move. I have desire and motivation too, but it isn’t death, famine, and oppressive rule. The opportunity to view these larger-than-life masterpieces, think about the artists’ tools, and the world that surrounded them, gives me the opportunity to connect with the past and have it become more real. I can attempt to emotionally comprehend what happened. 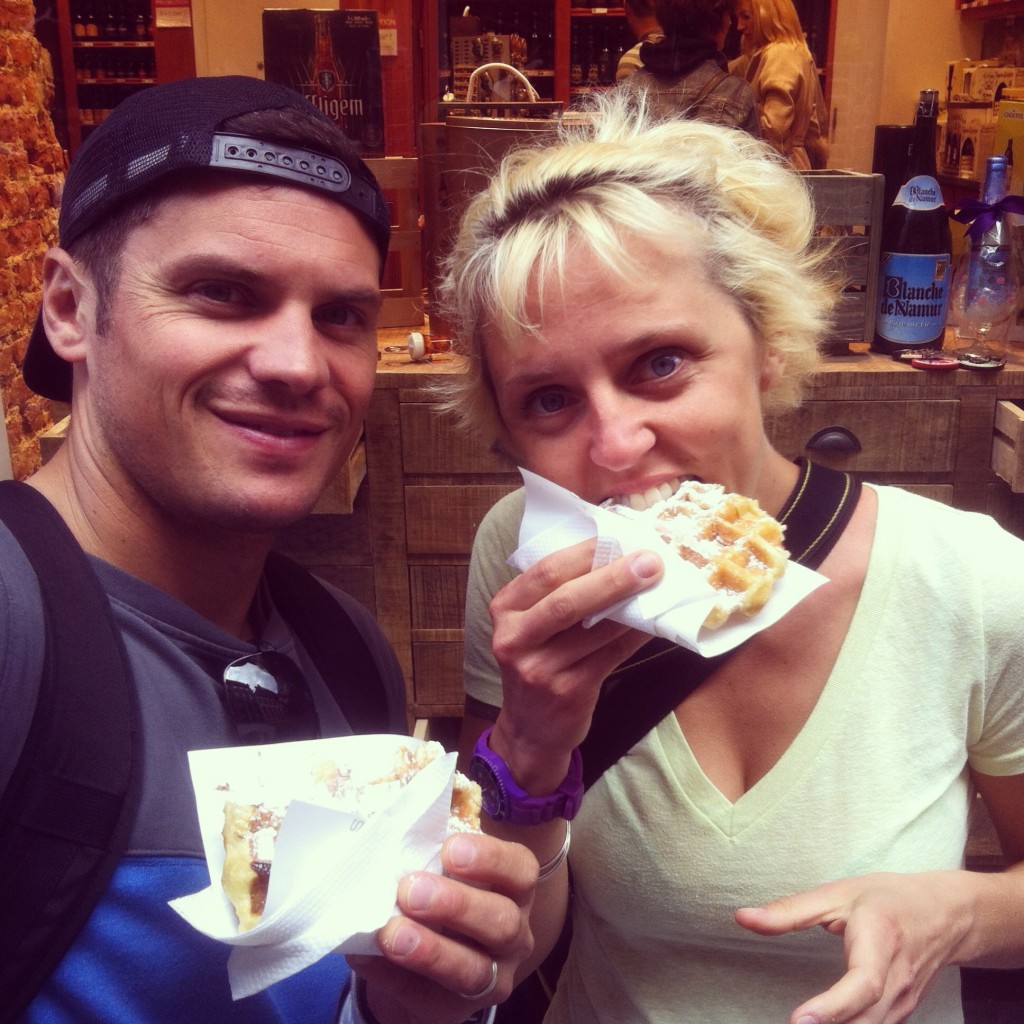 Placing one’s self in this position is no small fete. It’s a good thing I was in Brussels on the occasion of this study, because (as I alluded to earlier) this trip also contained plenty of care-free, modern life, jazz festivals, city-hikes, and beer.