Everybody saves things. You save old notes or letters. You save photographs in albums. You save funny or cool advertisements from magazines. You save a favorite old t-shirt. You save concert ticket stubs. You save lift passes from memorable ski trips. You save postcards people have sent you over the years. You keep these things in a trunk, or a plastic tub, or a cardboard box somewhere in the deep recesses of your basement. The joyful memories they have the power to evoke are also tucked neatly away in the back of your brain, seldom seeing the light of day.

All of these things you love and find very necessary, even though they serve no purpose in your current daily life. If you remain living in the same house, these treasures will also remain in the same house. If you move; while these items may get purged from time to time, they will never be completely thrown out and they will follow you to the next house and the house after that.

I’m moving from Germany to Texas. And since I am extremely organized and efficient when I move, I recently went through and purged my personal collection of The Best yet Most Insignificant Items Anyone Can Treasure.

In particular I found a mini collection of doodles and sketches that I haven’t seen in years. Of course, they brought a smile to my face and I’m compelled to share them. 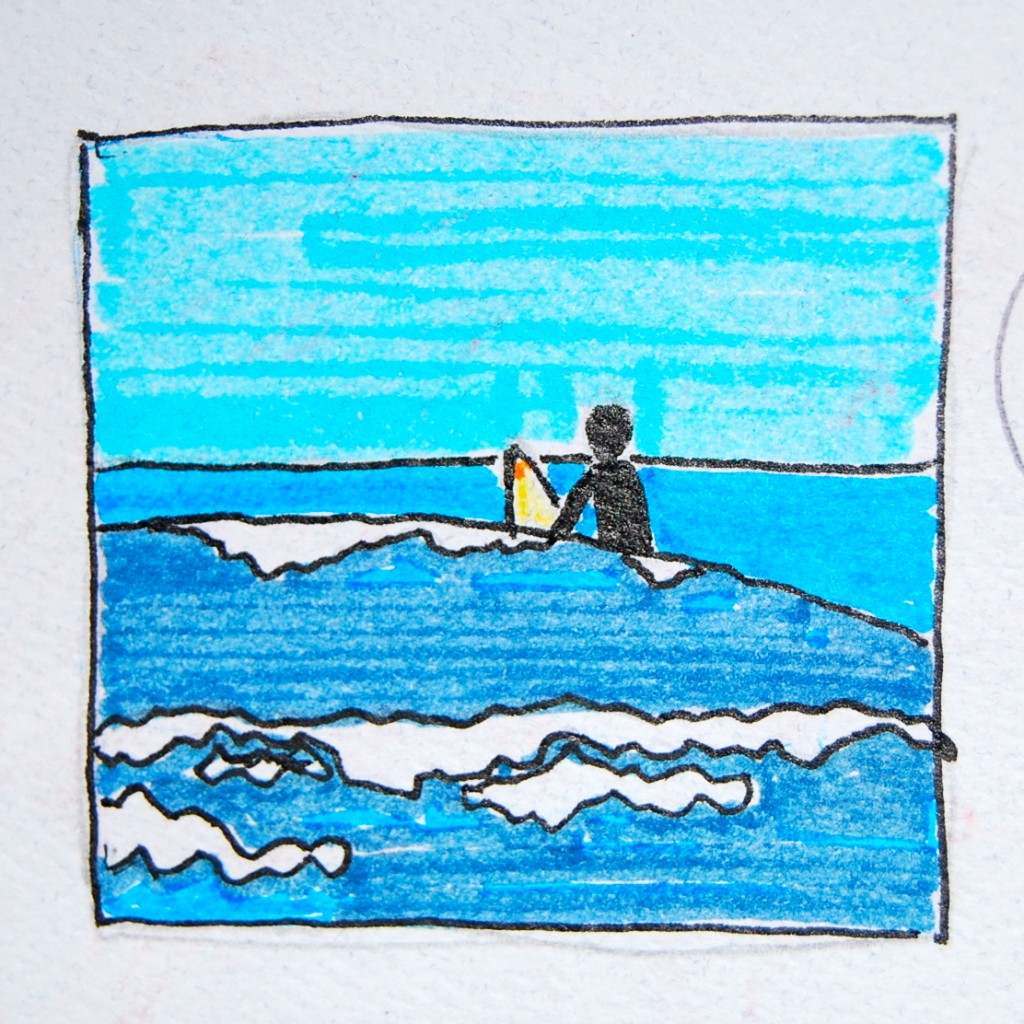 These first two sketches I made on the beach in Manasquan, New Jersey. We lived there for the first time during the spring and summer of 2007. Phil towed banners up and down the beach in an airplane and I worked in a lobster restaurant. On this particular day Phil was surfing. As it wasn’t quite yet summer, the air was chilly and the water was freezing. I chose to stay on dry land. I drew this tiny sketch of him out in the water and the other sketch of the jetty before I got restless and traded doodling for a walk down the coastline. 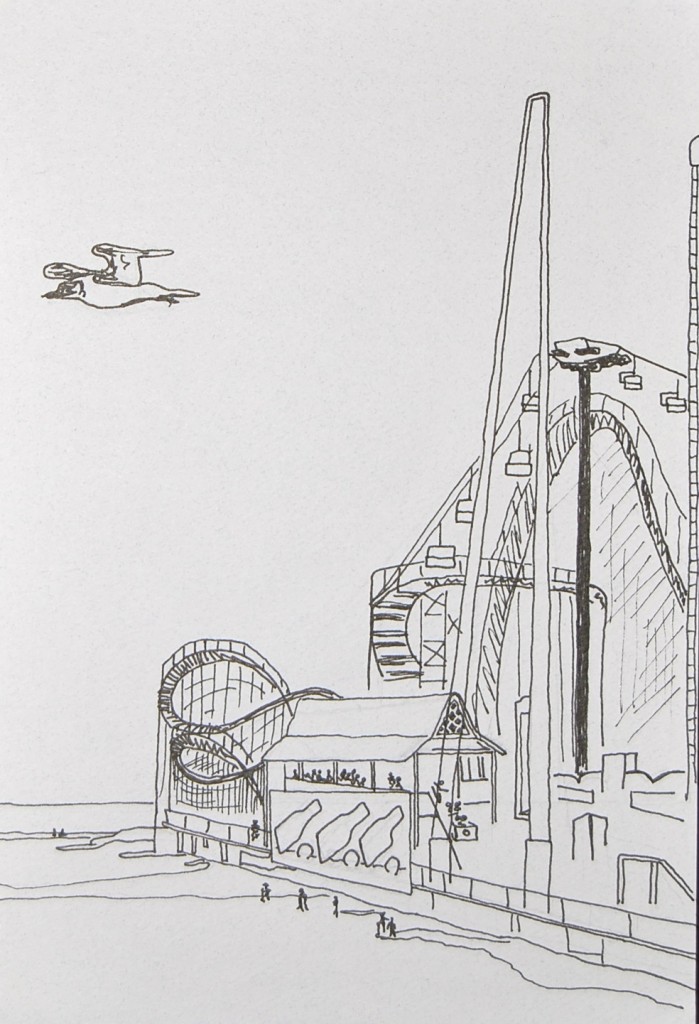 This sketch is a bit older, maybe 2006. Simply put, it’s a drawing of an ocean pier full of rides. But like all memorabilia, it goes deeper than that. The place is Wildwood, New Jersey. It’s a beach town in Jersey located on the southern coast. Ever since the first year I was born (and before) my grandparents would rent a beach house for a week in Sea Isle City, New Jersey. All of my grandmother’s brothers and sisters would get a house the same week. The whole family would be together and it was great fun. We would take one day in the week and make a short trip from Sea Isle to Wildwood. As a kid, I thought Wildwood was the best. It had an enormous beach that you hiked for about a quarter mile (or so it seemed) just to get to the water’s edge. There were ice cream vendors that walked up and down the beach with coolers. Not all the beaches had that. I always bought a Fudgesicle, a.k.a fudgie-wudgie. Wildwood also had an extremely developed boardwalk, double wide, complete with three piers of rides, games, and amusements, tons of shops with florescent bathing suits, Oakley windbreakers, and hermit crabs, the best fudge in New Jersey, the largest slices of pizza known to Man, more seagulls per square foot than anywhere else in the world, and its own train that you could ride from one end of the boardwalk to the other. As the years wore on they took their tole on Wildwood. It got older, more weathered and a bit dirtier, but for me it never lost it’s charm.

OK. No more Jersey Shore sketches. We’re going to switch gears a bit for this last sketch. I feel as though I need to prep you, because it’s a bit weird. When I was in college I would doodle while taking lecture notes. The more bored I was with the lecture, the more odd the doodles were. This sketch is not from college, but I feel as though I must have fallen into a similar black hole when I drew it. When I uncovered this sketch I didn’t even recognize it. Luckily, I drew it on the back of a journal entry I wrote while on a trip around Nova Scotia with my grandparents, so I was able to place it. I think the trip was in 2004, maybe 2005, and I imagine I drew this late one evening in the hotel, or B&B, after I had plotted the course for the next day’s adventure. Nova Scotia was wonderful, but having taken the trip with two people in their mid seventies whom I love dearly can, kind-of, skew a perception. I have always been grateful that I took that trip, chauffeuring my grandparents around the big island, seeing every lighthouse there is to see, even if I did come close to losing my sanity. Conversations would go a bit like this…

Gram: “How much further until we get there?”

Me: “About thirty minutes.”

Me: “About thirty kilometers.”

Grandpa: “What is that in miles?”

Gram: “Then how do you know it’s thirty minutes away?”

Me: “Because I’m driving 60 kilometers per hour.”

Gram: “What’s that in miles per hour?”

I think you get the idea. 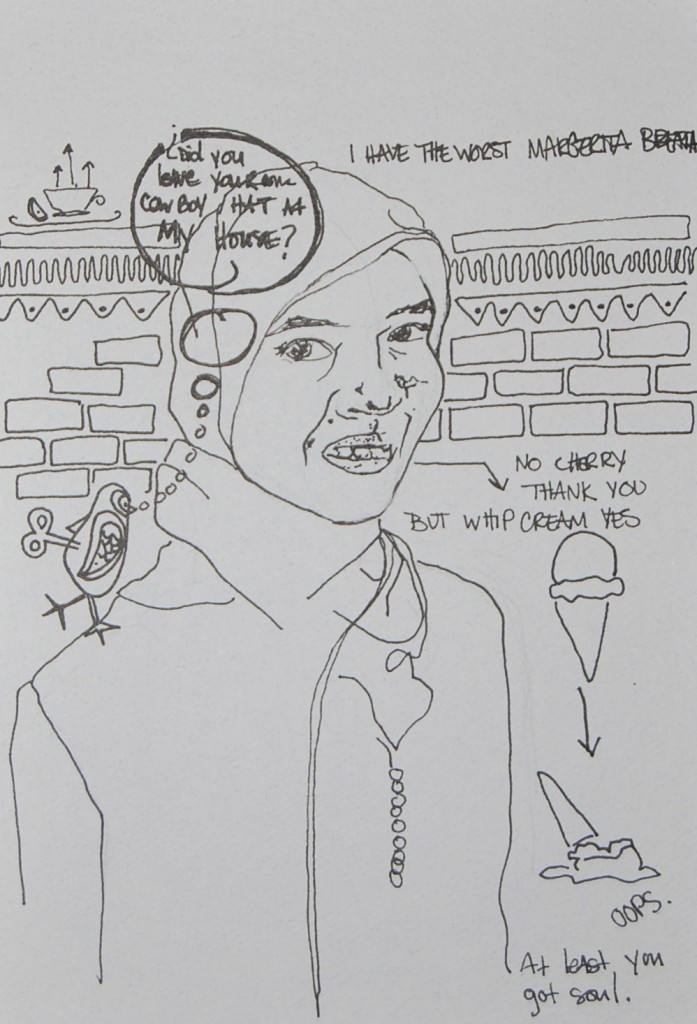 The top line reads, “I have the worst margarita breath”, and I spelled margarita wrong.

The wind-up bird is asking the girl if she left her cowboy hat at his house.

I’m sure you can read what’s around the ice cream.

Under the fallen ice cream it reads, “At least you got soul.”

As I have previously stated, I have no idea what I was thinking when I drew this. I hope I actually did have margarita breath. It would make it easier to understand how I could have thought it up. Unfortunately I doubt I was drinking margaritas in Nova Scotia. And the poor girl. she couldn’t be uglier. Her eyes aren’t even aligned, and what’s up with her teeth? As I type on, I may actually be regretting the choice I made to share this sketch.

At the very least, maybe you got a chuckle out of it. And if so, mission accomplished. Thanks for tripping down memory lane with me.

We’ve got five days until our departure from Germany. Thanks for reading. The next time you read a post from this blog I will, most likely, be a Texan by then.