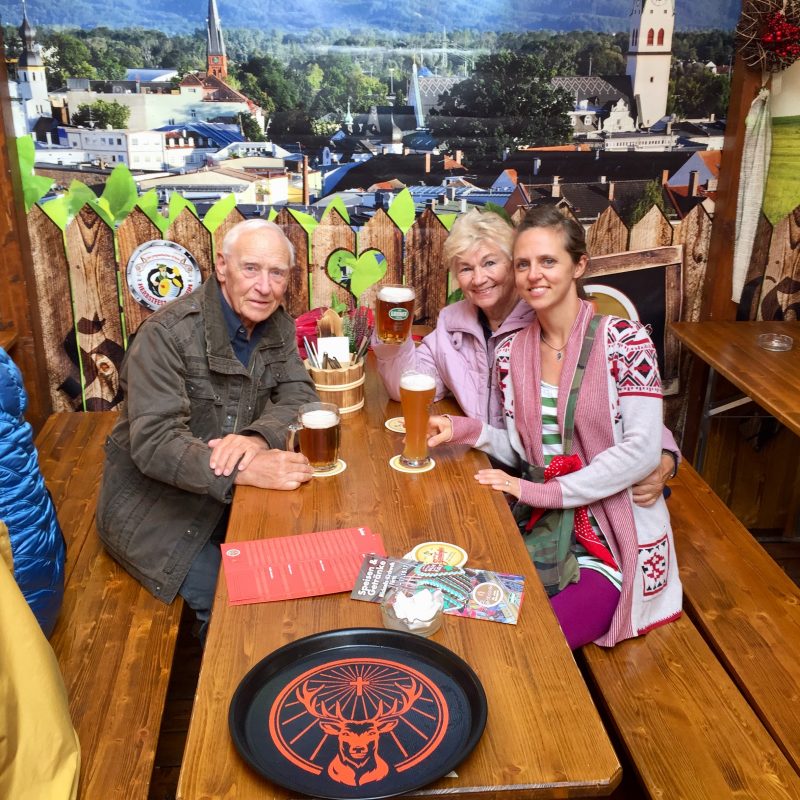 My recent four day trip to Germany can be summed up in four concepts; warm fall weather, friends are family, fresh beer & comfort food, and endless strolling. If that’s enough for you then stop reading here. If you crave more detail please read on…

A famous saying in southern Germany is Kein Schöner Land. It’s the idea that nowhere in the world is more beautiful than Bavaria. Every aspect of my travels fit this sentiment.

For starters, there is something about being on an airplane that I find inspiring. I don’t worry about the lines, the germs, and the strangers in tight places. I just relax, get up to 30,000 ft, and feel good about being alive. I take a deep breath, look out the window, and life seems so clear. Opportunity abounds. I turn my phone off and zone out. “Sorry. I’m unavailable right now. I’ve got my headphones and journal, and I’m on an airplane headed around the world.” 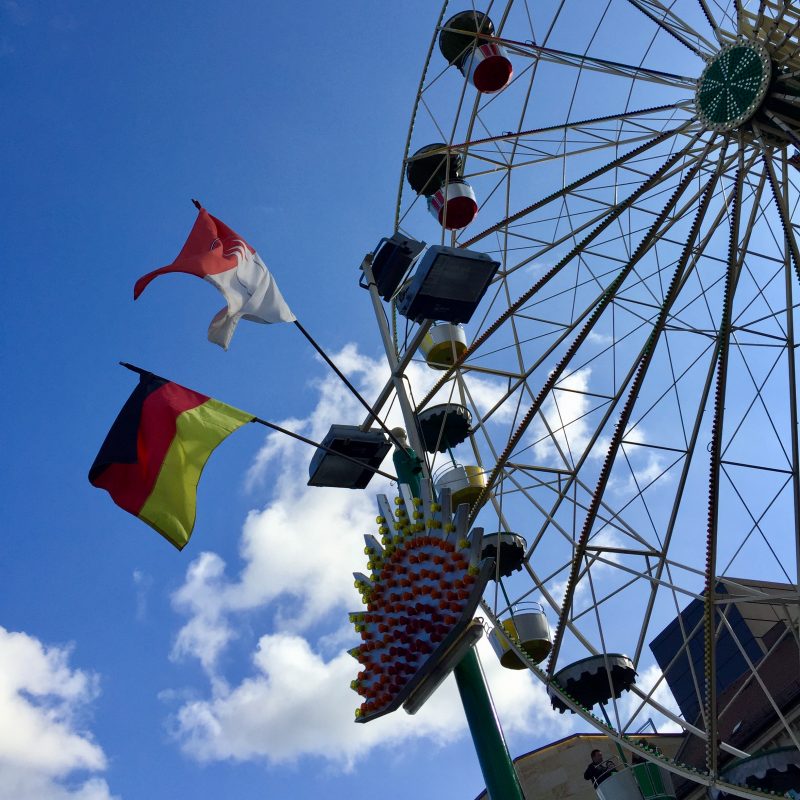 Upon my arrival Saturday I collected my baggage, my first cup of European coffee, my rental car, and I was on my way back to the heart of all the wonderful memories I had made while I lived in Ansbach, Germany. I was halfway through my drive, proud of myself for remembering the way, not needing GPS, and I realized I forgot to check the shifter and find reverse. Luckily, one doesn’t need reverse on the autobahn. I got home and Ludwig stepped out of the front door to greet me. After our hellos I told him about my issue with reverse, which I in-fact could not find. He was happy to see me, but more delighted to solve a problem for me. We laughed together with puzzled faces for a few minutes as he fumbled to find it as well. Eventually he figured it out and we went inside for lunch. I was starving and Katharina had made a glorious German spread. For my first meal in Germany, we had homemade pork schnitzel, potato salad, an assortment of other pickled vegetables, and double bock beer. Sitting back and enjoying a home cooked meal with Katharina and Ludwig on a brilliantly sunny day in September it was as if no time had passed at all. After lunch and reacquainting they forced me to nap. When I awoke it was nearly evening. We had the traditional German appetizer of coffee and cake, followed by a light dinner and an evening activity of a German variety show on television. Dinner was cold cuts, cheese, dark bread and rolls, a few spreads, and a few more beers. Katharina and Ludwig will both be 80 soon, but they don’t act a day over 60. They are terribly fun to be around.

Like all days, all around the world, Sunday morning began with breakfast. In Germany breakfast looks a lot like dinner except it is accompanied by fruit, coffee, and jam. In the late morning we strolled through the fields that border our neighborhood, then we went out for lunch. On the way to Gasthaus Rose in Flachslanden I got the tour of all that is new in Ansbach. Even though the Army base isn’t what it used to be, the community is still growing and there is a lot more shopping to be had. Gasthaus Rose was packed. The reason being it was the first day of Karp season, so we’d be seeing a lot of whole fried fish going out on plates that day. The restaurant was so full we had to eat in the saal, the banquet room. The room is set with long tables and guests must dine together. I enjoy eating in the saal because it makes me feel like I am at a party. It’s a unique chance to share mealtime with others. We three enjoyed all the savory German classics; Rostzwiebelbraten, Entekeule, and (most notably) Schaufele. ( beef steak with fried onions, roast duck thighs, and a pork shoulder) The Schaufele came with the best Kloß (potato dumpling) I’ve ever had and a delicious dark beer sauce. A couple of pilsners from the local Hauff brewery were the accompaniment to my overindulgence. Thankfully, after lunch there was more walking. Then we headed home to sun on the balcony and drink more beer. It was very important to all of us that I enjoy as much beer as possible before Monday morning’s appointment. I had more beer while we watched the news. After the news Ludwig felt a Jägermeister was in order. Needless to say there was no need for dinner that night. Our evening activity was watching a romantic comedy on television. The movie was filmed in Sweden. Ludwig pointed out every red house that came into view throughout the movie. I couldn’t help laughing to myself because old people (no matter their nationality) say the funniest things and concern themselves with the oddest details. He proceded to explain how almost every Swede has a house of red wood and why. 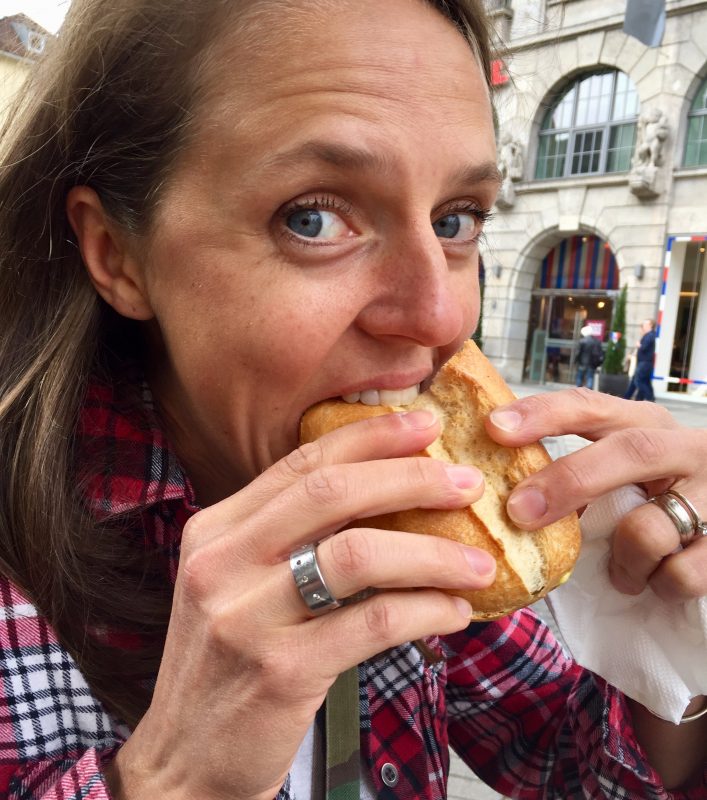 Monday was my doctor’s appointment in Nürnberg. Katharina came with me. The appointment was quick and easy, and we celebrated with a little shopping in the city. We were excited to get the shopping underway so we had lunch on the go. Imbiss is the term in German. Each city in Bavaria has a unique sausage. The Nürnbergerwurst is one of my favorites. It is short and skinny, so after it has browned for a while it is nice and crispy. They pack three of them into a kaiser roll and call it Drei im Weckla. When the roll is fresh and you top it with a bit of mustard, it is easily one of the best snacks the world has to offer. Katharina had drei im weckla. I had sechs im weckla figuring I could afford to eat six sausages given my new potential life circumstance. Even a lady who has been pregnant for a half-day doesn’t need to go hungry. On our shopping spree we bought cake, Lebkuchen (traditional gingerbread cookies only to be found in Nürnberg), postcards, and adorable winter hats and coordinating jumpsuits for my girls. We didn’t get home until evening. We had our usual dinner without Ludwig. He had gone fishing when we left for Nürnberg. He did not return until nine o’clock that night. I was amazed. He fished for almost twelve hours. He brings nothing to eat save for one beer and one bar of Ritter Sport. (German chocolate) He claims if he eats anything else the fish can smell it. He must know his fish because he came home with twelve bass. He pitched them all into the kitchen sink and Katharina and I kept him company while he cleaned and filleted them. 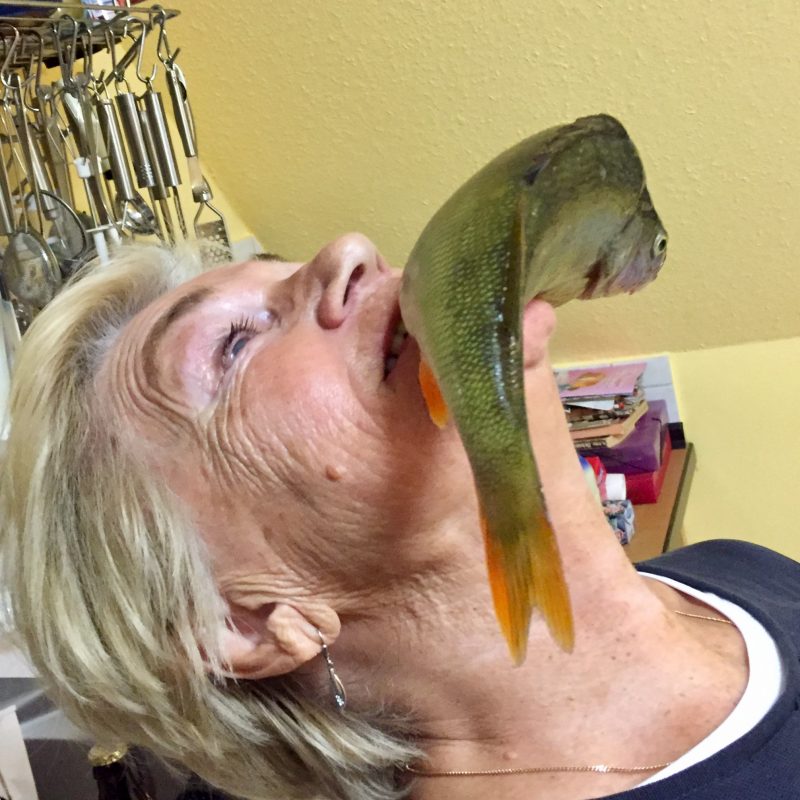 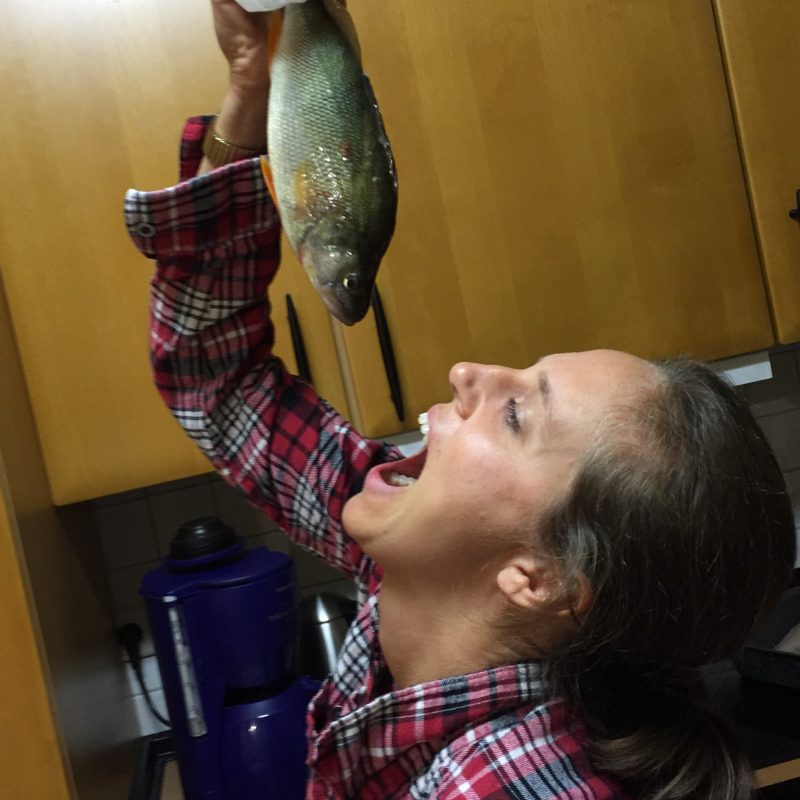 Tuesday was my last full day in Germany. We made it a great one. I began with cake for breakfast. I am a healthy eater, but I do firmly believe that the best days begin with cake for breakfast. Before I even left El Paso I was dreaming about a slice of German cheesecake. It’s light and creamy, not too sweet, and has a mild citrus flavor. It is the perfect accompaniment to coffee. At the bakery we had also bought a hunk of Hefezopf, which is a fluffy yeast bread with raisins. It was a two-cup-of-coffee kind of morning. Ludwig went out on a mushroom hunt after breakfast and I stood over Katharina’s shoulder as she prepared lunch. We had pan seared chicken with a mushroom cream sauce served with Semmel Knödel (bread dumpling) on the side. Lunch took the greater part of the morning to prepare, and was perfect. As you may have assumed, the sauce was prepared using Ludwig’s wild mushrooms. The meal was decadent and required that we retired to the couch for a bit of digesting. The pause was brief and we were back up and getting ready to head to the nearby city of Fürth for a festival. I was excited to partake in one last party before I said good bye to this beautiful country. We went to the Michaelis Kirchweih. Because it’s been a while since I’ve described a German festival, a Kirchweih is something like Oktoberfest meets church carnival. There are rides and games, food for sale that ranges from full meals served in full-service tents, to cotton candy and corn on the cob. The streets are lined with vendors and pop-up bars serving anything you like. On special at the kirchweih is the beer brewed specifically for the festival, and the Federweiser. Federweiser is a wine specialty of the season. It is premature, unfiltered wine with an unpredictable flavor and alcohol content. Since I was recently pregnant I sipped a non-alcoholic hefeweisen which I thought tasted like a honey soda. We sat at picnic tables with other festival goers enjoying light conversation and watching the crowds of people as they strode by. I am always impressed by the fantastic set-up of these affairs. So much construction and decoration goes into the week long event and it makes for a beautiful time. 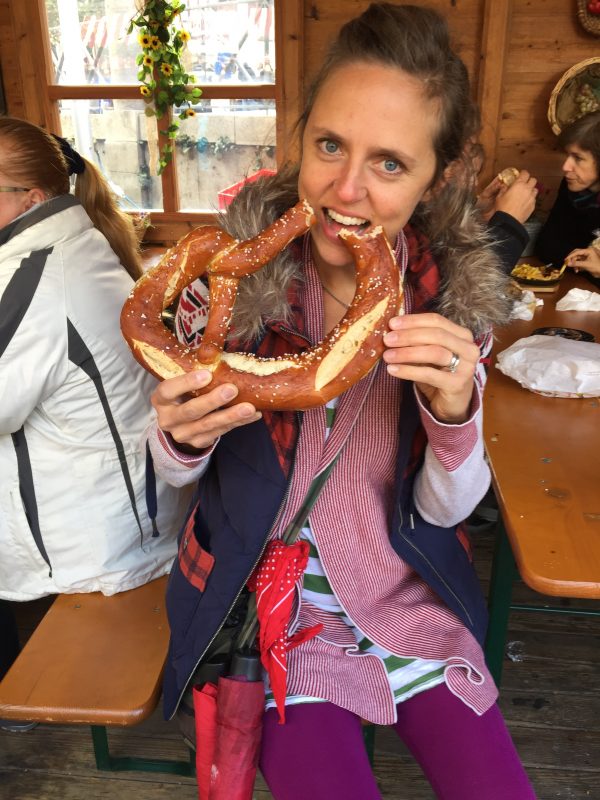 After a long afternoon in Fürth we settled back in at home. I finally finished off the gigantic pretzel I had purchased with a bit of cheese and butter from the fridge. We watched the news together one last time and I read until bed. It was hard to concentrate on my book as my mind wandered through the recent events. I am impressed with how comfortable the three of us were together for the entire week. Sure, we were neighbors, but had never shared the same space for so long. It was comforting being around them, sharing some of the same old stories and laughs, and learning new things too. I loved the three years I lived in Germany. I think Katharina and Ludwig were a huge part of that. They helped me feel comfortable both in Germany and with my German language skills. I feel incredibly lucky to have been healthy enough to go back to Germany, visit those two, and pick up my last potential child. And while none of my children were (or will be) born in Germany, at least we can tell them that they were made there. With any amount of further good fortune I hope to visit again and drag them all along. 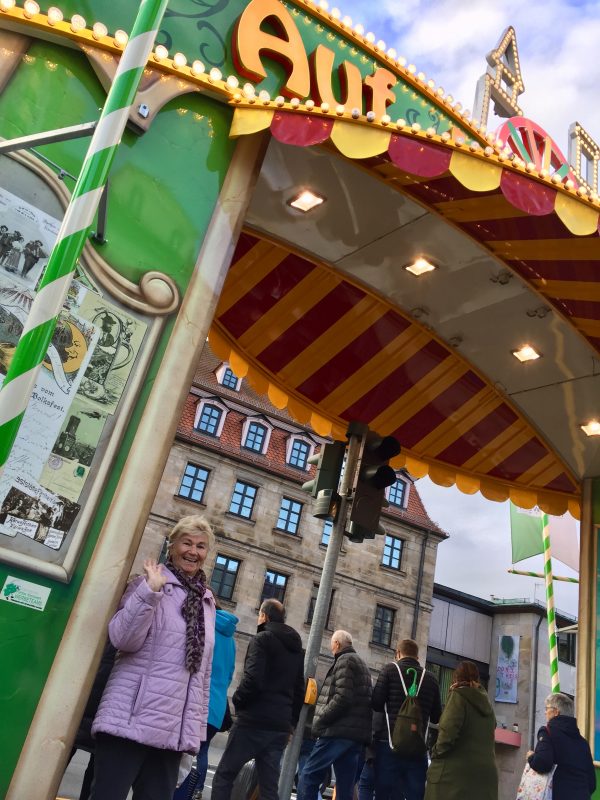