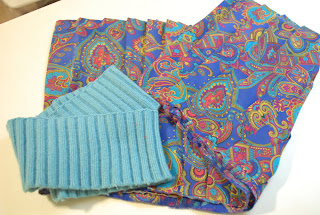 So this is a photograph of the bottom half of a dress that I picked up at a thrift shop. I absolutely loved the print. The bottom half was obviously pleated so I thought I could make a cute skirt out of it. I am showing it with the chunk of sweater because somehow I would like to turn that into the waste band. (I just have no idea how. Send me an email if you’ve got any ideas for me.) This dress also caught my eye because it had matching covered buttons. And Flo Sca always needs new and cool buttons. 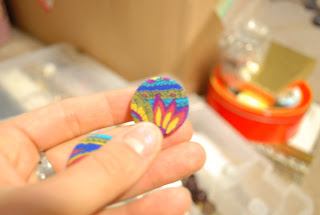 The colors in this print are just perfect I think.
I got right home and got to work with this fabric. I have made a couple of scarves with them already.
Here’s one. 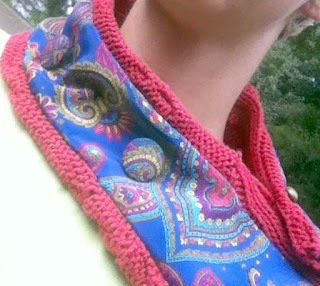 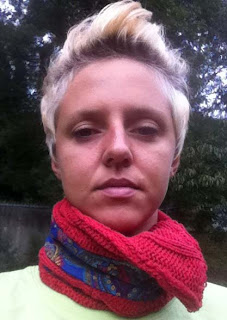 I sewed this one in my new, bigger style. I really like it with the hanging flap. It’ll be great to pull this up over your face when it’s cold and windy. It also makes a nice neck  line when worn down.
I used the covered buttons here too.
In sewing this piece, something from the dress’s tag cuaght my eye. I don’t know why, I never do this, but I decided to google the garment’s brand.
LESLIE FAY
A clothing business founded by Fred Pomerantz. In 1942, Fred Pomerantz began making uniforms for the women in the US armed services. The government had done a study of statistic concerning the measurements of the typical female figure, and this information was provided to Pomerantz in order to help him make uniforms that properly fit.
After the war ended, Pomerantz decided to produce a line of women’s clothing using the same sizing as he had used during the war. In 1947 he founded Leslie Fay, which he named after his daughter. Leslie Fay became a major maker of affordable and attractive dresses and sportswear marketed toward the middle aged…….
I thought this was quite interesting on a few levels. It kinda-cracked me up that the history behind this brand was not ordinary. I have looked up the brand names of some of my other pieces since, and not all are this interesting. Oh well.
And stay tuned to see if I ever get around to sewing that skirt 🙂