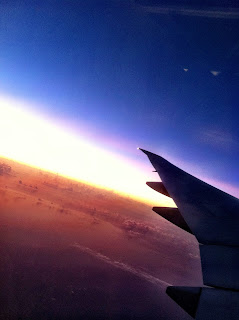 I think traveling on an airplane is exactly like going on a big hike. When I first get to the airport (or to the trail head) I am excited. I rarely get to be in this place, so it seems fresh and new. When I get on the plane (or begin hiking) I am attentively looking around and absorbing my surroundings. I am dreaming about the destination and how fabulous it will be. Somewhere in the middle of the flight ( a couple of hours into the hike) I begin to get bored and uncomfortable. I am no longer looking around. I am trying to think of new ways to amuse myself in my head. My surroundings have looked the same for a while and I am ready for a change. Just when I think I can’t stand it anymore, and my legs feel like they are going to fall off, and I’m tired, and thirsty, and dirty, and have a headache, and have to pee….the plane lands (I reach the top of the mountain) and I am instantly rejuvenated. The world becomes new again. I can stretch and rejoice in the fruits of my labor. The view is gorgeous and I am excited for what life has to offer. It is a small portion of the general population that flies. (or hikes) I am thankful for the unique opportunity to be where I am. I may explore a bit, but I will not stay long before I move on to my next destination.
This is a scenario I lived over and over again while getting to Bali. During flights and layovers I had plenty of time to contemplate such a similarities. It took me three airplanes, four airports, and two airlines to reach the tiny island, but as life is about the journey and not the destination I enjoyed myself along the way.
I’ve been to California, but I’ve never been to LAX before. This summer I got my chance. My first thought, after leaving Philly and entering LAX, was that there was an alarming number of beautiful people gathered in one building. As I fly to different places I wonder if it is possible to generalize the type of person utilizing particular airports. If so you could make a funny cartoon series out of it.
I have a dear friend that lives in San Diego. I met her my freshman year of college, and as life took its turns we ended up falling out of contact for four years. Recently we’ve reunited thanks to Facebook, and I thought it would make complete sense to call on Arianna for some entertainment during my 14 hour layover. Well, San Diego is not close to LAX. When I wrote to Arianna about a meet up her exact response was, “That is sort of retarded, but yes! I suggest a weird lunch.dinner combination and/or celebrity pool party.” (In defense of Arianna I used the words retarded idea first.) Even though there was never a celebrity pool party, Arianna did come and pick me up (as promised) and fun ensued.
It was rejuvenating to see such a great friend after so long. You know how those things go. I hopped in her Prius, we picked up where we left off, and never skipped a beat. I love catching up with old friends I haven’t seen in eons. I use it to remind myself of who I am and celebrate where I’ve been. If you have a friend you met when you were 19, and the last time you saw her you were 24, and you never saw her again, then you had that friend for five years. But if you get together with her for a day when you are 31, then you’ve been friends for 12 years and counting. I like to brush the dust off of my friendships and keep them polished. Exquisite relationships are something of which to be proud.
As I was saying, Arianna swooped me up for a tour of LA in a day. First, we strolled Venice Blvd. Every side street is adorable. All of the residences have respectably overgrown landscaping. It allows privacy for the homeowner, but also adds a bit of mystery for me the voyeur. Each shop, cafe, and restaurant is uber-hip on Venice Blvd. Even at 11:00 am there was a line to get in anywhere. We ate at a place called Hal’s. Basically, we chose Hal’s because they could seat us immediately, but I loved Hal’s because it was a jazz lounge. Their food was great and they had a nice beer selection. And lucky us, it was a Sunday. As is customary for brunch, muffins came to the table. It made me feel like a school girl to indulge in beer and muffins late on a Sunday morning, laughing with my friend about boys (a husband and a fiance) while waiting for my salad in L.A. 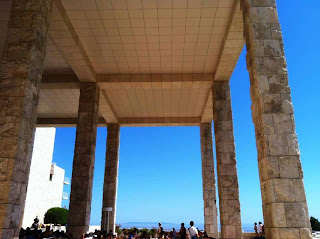 After brunch we went to the Getty Museum. The traffic scene we were in was the best L.A. could ever know. It was smooth sailing until we got to the museum parking lot. The museum is free on Sundays, so attendance is through the roof. In case you’ve never been, the architecture of the Getty is the best part about the Getty. The museum building and its grounds are truly one of the most impressive sights I’ve seen in a while. The sky was a bold blue, the grass was just too green, and they were interrupted yet sewn together with squares, rectangles, and diagonals of cream-colored stone.
Once I had fully absorbed all that was the architecture, we toured a few exhibits. There was a large show of the work of Herb Ritt. He is a celebrity photographer that worked largely (if not solely) in black and white. You might recognize this:
I think Ritt had such a fascinating way of isolating beauty. His photographs of tone, athletic bodies and model faces seem to materialize and energize the godliness in the human form.
On this same day, the Getty was also showing a collection of drawings by Gustav Klimt. This was a fun treat for me. Since I now live in Germany, I identify (for some reason) with German and Austrian artists. (as if they are one of my own, the nerve) The collection of Klimt’s drawings was the most satisfying display I’ve ever seen. I think sometimes when you go to an exhibit of drawings it just seems like a curator lovingly hung a bunch of trash sketches that no one needs to care about. These drawings, however, had gorgeous lines and smudge shading. They were (to be trite) complex, yet simple. There were a couple of finished works on display. The crisp detail and exact touch to the artist’s hand was impressive. I was jealous to say the least. One aspect of his work that I found interesting: the nude studies and sketches were beautiful, but when the same images would be translated onto the finished work the ladies became much more garish. Personally I read it as an interpretation of power. The models being meek and powerless, with Klimt wanting his final images to be gold, and bold, and square and powerful.
We spent a greater part of the day at the Getty and needed to make our way back to the airport. Arianna couldn’t drop me off with even the slightest empty belly, so we stopped to eat again. Like me, Arianna loves an easy excuse to try a new restaurant. We had (our own personal) Happy Hour at Tripel in Marina Del Ray. I think Marina Del Ray was the perfect place to round out my tour of LA. Tripel had a sharp interior, with an impressive bathroom, tons of gourmet beers, and fancy snacks. My trendy points went sky high while hanging there. 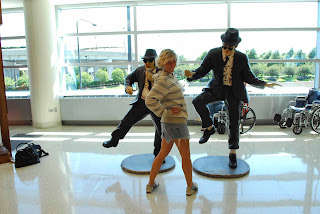 Good times, unfortunately, can not infinitely roll on. I was dropped back exactly where I started, at LAX waiting for my flight to Taipei.