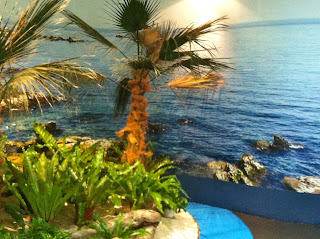 My flight to Taipei was great. There are two things I like better about Asian Airlines; the food and the movie selection. Most flights to Asia from America are long. It helps that their stewardesses are sweet and attentive. 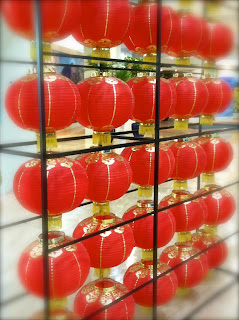 It was a 13 hour flight, through the night, for me and I didn’t have a window seat. The guy sitting next to me, by the window, was really excited. I got the impression that it was his first time on an airplane. As we took off and traveled toward cruising altitude, he took pictures every 15 seconds. I wanted to ask him if it was, in fact, his first time on a plane. He didn’t seem to speak English though, so I didn’t bother. Then I realized, if he doesn’t speak English, he probably doesn’t live in America. Thus, this is at least his second time on an airplane. Maybe he just went to LA to buy a phone to take pictures on the plane, and then returned home to Taiwan. Whatever his deal was, this guy saved my life. He had a friend sitting in the middle row of the airplane. After dinner his friend suggested they sit next to one another. Instead of asking me to switch he abandoned his window seat for the middle with his buddy. I chilled on that situation for 30 minutes, then I pointed to his seat asking with my eyes, “Are you gonna sit in this seat anymore? Because if not I’d sure like to sleep in it?” With his hands and eyes, and smile he replied, “Sure, take it.” I slept like a mouse in winter all snuggled up in my corner on the airplane. It was Heaven sent. When I awoke the stewardesses were serving breakfast. The two options were; eggs or porridge. I love oatmeal and cream of wheat so I would have gone for the porridge. Fortunately, I had been tipped off, by Arianna, that the porridge may contain fish. (or fish flavor) Based on the same reasoning as mine she had chosen the porridge (on one of her trips)and regretted it. Eggs for me it was. I can’t say it was my most favorite airplane meal, but the tea and fruit were nice. While eating my funky eggs, and drinking delicious tea, I watched the sun rise over the middle of the ocean. It was magical. My buddy took his seat back for landing, which I didn’t mind, and proceeded to take a million more pictures. 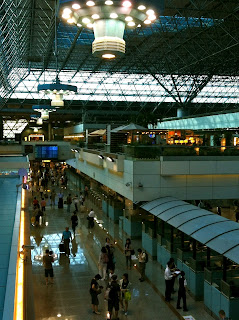 The Taipei Airport is the most glorious airport I have ever been in. It’s not even fair to call it an airport. I could have spent my entire vacation there. The terminals are intermingled with a pristine shopping experience. The airport doubles as a high-end shopping mall. I was immediately inspired to buy something, but I settled for walking around instead. In my 5 hour exploration I discovered that all of the stores were downstairs, and the restaurants, cafes, and lounges are upstairs. They even had VIP areas upstairs. I felt the need to take photos, and the funny thing is that I didn’t feel weird about it. (This is not a joke) Everyone else was taking pictures too. I found a relaxing green room. It was full of fake plants and nature scenes. This room had calming music and free massage chairs for anyone waiting for a connecting flight. 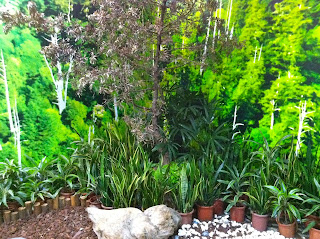 The airport also has nice, free water dispensers. You can actually fill your water bottle and not feel gross about it. (like you do when you fill it at a water fountain near a restroom in a normal restaurant) I also found a Starbucks tucked into a nook of a lounge in the airport. There was no stopping me. I made a B-line for it. I guess I have a slight Starbucks addiction. They had other American chains in the airport, but I wasn’t interested. In general, I scoff at people who seek out American chain food restaurants in other countries. I used to think that those businesses should stay in America and stop trying to take over the market in other countries. I have officially retracted that opinion from my personality, based on my reaction to my Starbucks discovery. I had to; otherwise this lust for Starbucks would make me a hypocrite and I’d have to hate myself. So go get your Taco Bell in Germany, and your McDonald’s in India. I’m sipping a $5.00 Starbucks coffee in Taipei and savoring every sip. 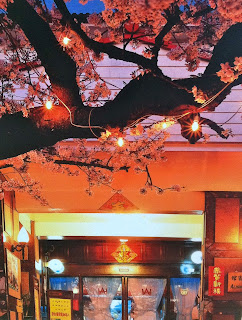 My designer coffee was the gateway drug to open my mind up to more luxury shopping. There was an adorable Burberry short-puffed-sleeve polo I wanted and some Dior perfume. Have you smelled Addict? I think it is divine. In a matter of ten minutes all sanity had left my brain. Who needs souvenirs from Bali when you can spend all your money in the Taipei Airport on merchandise you can get anywhere? 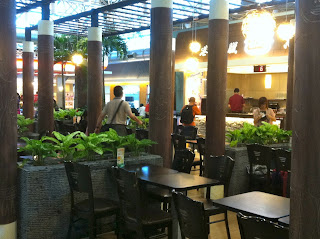 I came to my senses and boarded my next airplane empty handed. The next flight was 5 hours to Bali. Now compared to a 13 hour flight after a 14 hour layer, it seemed like a hop. On this flight I actually had a window seat. But when I arrived at it there was a young man sitting in it. I said, “I think you may be in my seat.” His reply was, “Oh really? I wasn’t sure which letter was the window, so I just sat here.” I was thinking, “I don’t believe that for a second. It’s pretty obvious that you wanted a window seat so you decided to take it and face whatever negotiation would follow.” I thought the kid was such a turd for doing that, but then I thought about the Universe. I remembered how on the flight before the guy was cool enough to give me his seat, and I relaxed. I said, “It’s definitely mine, but if you really want it, I’ll give it to you. I had a window last flight.” But I was still grumpy about it so I did my best not to make friends with him on the way to Bali. 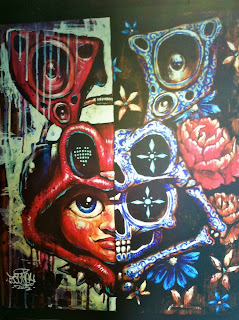 This is a cool graffiti exhibit I found in the airport. I’m pretty sure the artist’s name is BOUNCE. He creates images of a music-loving rabbit. 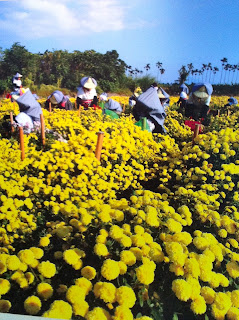 I left the airport for a brief time in the morning to stroll through the fields and photograph the local workers. Just kidding, this is more wall art at the airport.