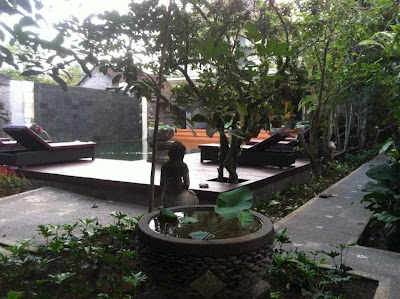 There’s a Starbuck’s in Ubud, but we didn’t go. We went to the Kafe instead. They claim to have true espresso. I’ll never know what that actually means. I think something just got lost in the translation. True Espresso must be an Indonenglish word. It’s surprising to me how many Balinesians actually speak great English; and none of them claim to have learned it in school. Is my language really that simple to learn? Why is it the only one I know?
I’m having a beet-ginger-carrot juice and we are watching a dog fight in the street. We followed the juice up with another round of coffee. We’re slow this morning. Last night we went to a restaurant called Casa Luna. I think there are three or four restaurants in Bali called Casa Luna, but we went to the one with bad martinis, no spare ribs, and over cooked chicken. It was the first dinner Phil did not enjoy. Ironically, this was a restaurant that chose to handout comment cards at the end of dinner. Phil wrote down his honest opinion. As if that was not a bold enough maneuver; our waitress returned volley by taking the comment card and reading it in front of us. I expected her to say something about it, in defense, but she didn’t. She just walked away with the card and showed it to all the other employees that walked by. Despite the fact that we watched everyone read our critical comment card, then stare at us, we were unable to discern any emotional reaction. Did they care? They must have. When the waitress brought our bill we looked it over. Something about the math didn’t make sense. There were two charges on the bill that were for things we didn’t eat. We had the mistake corrected and left. Was that one last attempt to screw with us? Chuckling to ourselves about how uncomfortable the whole situation was; on the way out we thanked them for nothing.
That night Phil and I combed the streets of Ubud. I was talking on and on about how this trip was inspiring me to write my own guide book. I was listing all the things I would have loved to have known about Bali before I came; stuff that you’d not find in a typical guide book. I want a guide book that would entice me to travel, yet not send my expectations soaring. I wanna know if something might be dirty. I wanna know if a museum is going to be dark, dusty, and cheap. I’m still gonna go, obviously, I picked up the guide book. Actually, this is probably not something anyone would pay money for. If it were free however, like a blog online, then many people would read it.
Phil thought a movie would be better than a book. We had each other in stitches over our imaginations. We laughed our throats dry and had to stop for a drink. Luckily we found a cozy little joint with 5 for 1 shots. Isn’t that the most ridiculous thing you ever heard? Of course not, we’re in Bali. I couldn’t tell you the name of the bar or what street it was on. At this point it wouldn’t matter anyway. There are three to four other establishments with the same name and the street has a few nicknames too. I do remember however, that the band was awesome!!!!! I’ve got to try to paint you this picture. I hope I’m up for the task. They were (seriously, no lie) an Indonesian Guns and Roses, or Aerosmith. They were all incredibly skinny, wearing tight ripped jeans, some wore vests instead of shirts, and they all had stringy long hair that hung in their face. All but one actually; the guitarist had hair like Slash. It may have been a wig; Asians don’t have curly hair. Two of the band members sang, but the one that sang (screamed) the loudest looked too much like a young (male) version of Yoko Ono. No kidding. They were such a spectacle. This band was one of the most intriguing things I saw the entire time in Bali. The songs they covered totally rocked. They had the sounds perfect.
This perfection actually got me thinking. They were the best cover band I have ever heard. How were they so good at imitation? Maybe it’s part of their society. Similar to this music situation; I also found the Balinesian recreations of Western food to be spot on. They brew a great beer, but it’s not traditionally their thing. And, unfortunately, every other shop on the strip was carrying bootleg goods; purses, sneakers, DVD’s, paintings. Why not live music too? Damn it they’re good. 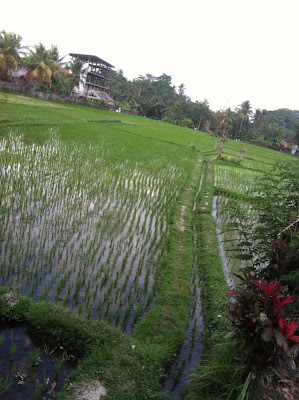 Of course we stayed the night, to see the band. Between sets Phil tried to talk to the band. They sang in English so clearly, of course they’d be able to speak it. Nope. He complimented them, but received only a smidgen of an answer. He asked, “So man, what’s your favorite band?” Literally the guy had no answer. Phil was definitely disappointed, but he didn’t let it ruin his evening. There’s not much that could spoil an evening of 5 for 1 rainbow colored shots.
That was our last night in Ubud. This is our last day at Hotel Puri Garden. Our driver from yesterday, Dewa, told us that it is the hotel owned by the current King’s family. Is that why I feel like royalty every time I stare out the window at the serene rice paddies and scarecrows blowing in the breeze?
After breakfast we went to the infamous Ubud markets. The market is basically two-in-one. On one side you have the traditional market with food, snacks, home décor, and supplies. It’s mostly for the people that actually live there. On the other side is every tchotchky and souvenir you can dream up, priced just right for tourists. As a tourist, you are welcome to go anywhere in the market you like. It is two stories tall, and absolutely overflowing. You want to purchase something just to make a dent in the merchandise. Haggling is the only sales technique practised in the market. The salespeople will, literally, give you an asking price of ten times the object’s value. If you take it, no one has fun. You gotta ping-pong the price back and forth so you both feel you’ve accomplished something. This was the first time I actually witnessed Phil enjoying shopping. He had an absolute blast haggling and making friends. We laughed our way into being the proud new owners of fabric, bracelets, key chains, penis-shaped bottle openers, and puppets. It’s all purchased at a very reasonable price; The Good Luck Price we say. At one of the stands we were the vendor’s first sale of the day. He proceeded to touch all of the rest of his merchandise with our money. This was done to bless it with the same good fortune of the bracelet we bought. Totally awesome; I hope to remember to use this same practice at my next bazaar.
We had a late lunch that day, with some early cocktails. They were delicious; the cocktails. They had fresh fruits and vegetables in them along with liquor. My drink was fresh ginger, basil, cucumber and rum. I could have drank those beverages all day, but I refrained. The service in Balinese restaurants cracks me up. It is hilariously slow. You have to wait a long time for everything; and this restaurant was a shining example. Two hours after sitting down, after only one round of drinks I asked for the check. The waitress replied, “Not yet. In a little while.” Why does she get to decide when I pay and leave.? If she had told me that I needed to ha
ve another drink I may not have been too surprised. Oh well, it’s all good when you’re on vacation.