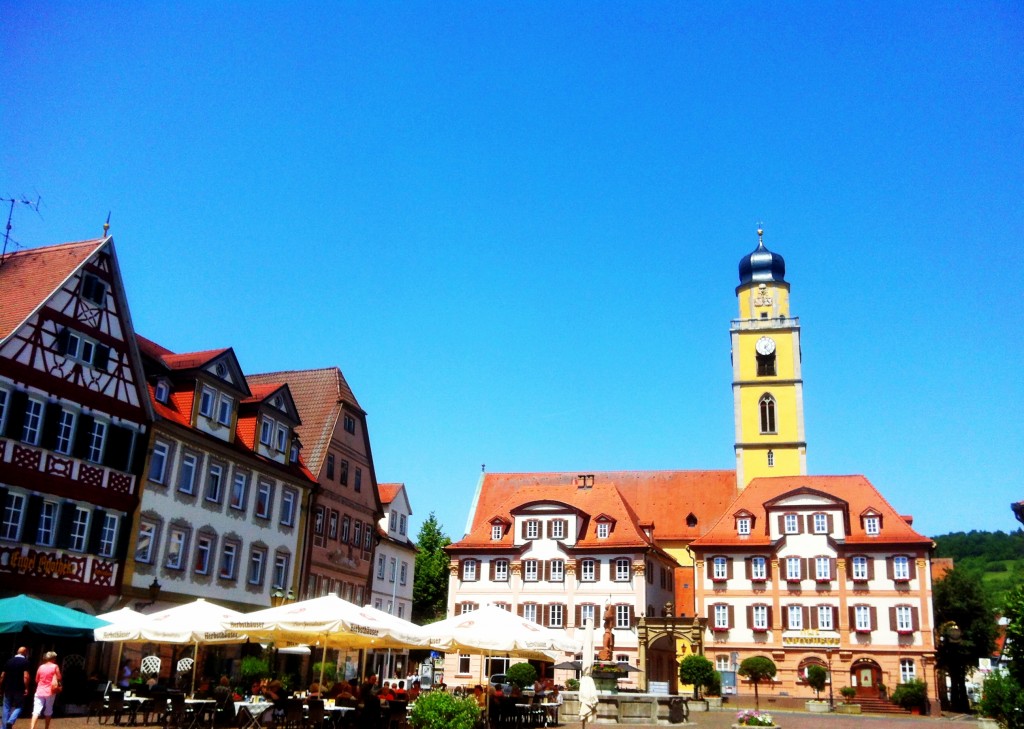 I took a field trip today with Katharina and Ludwig. We went to the romantic spa town of Bad Mergentheim…because if there was one thing that our group dynamic was missing…it was romance and water.

The drive from Ansbach to Mergentheim is absolutely picturesque. Following the Tauber River and the Romantic Road for the entire way; it’s about an hour’s worth of winding through bright green countryside, around hillsides covered in wineyards, and past a pleathora of 16th-20th century architecture.

Katarina and Ludwig really enjoy this small town because it’s the best place to spend a lazy Sunday. We strolled through the gorgeous Kurpark, past the government house and Museum of Teutonic Order, had a light lunch (homemade cheesecake) in an outdoor cafe in the center of the old city, and afterwards peeked into a wellness center. 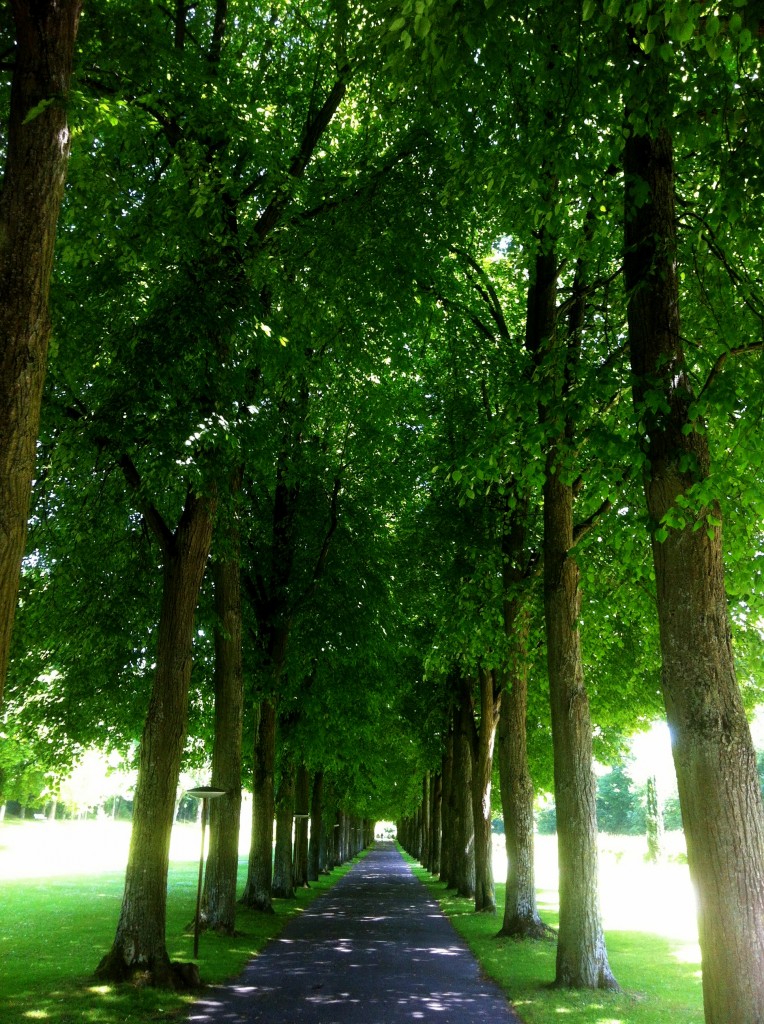 There are four famous springs here. Visitors come to drink-to-their-health at either Wilhelm’s spring, Karl’s spring, or Albert’s spring. They come to bathe in Paulsquelle. The spa grounds were quite impressive. The drinking of the water begins daily at 3:30pm. We were a bit to early for this, so we just stole some (holistic) peaks into windows.

Our initial walk through the park was great too. The trails cover 140km, but we stuck to walking around the spa grounds, japanese garden, and along the river. I saw the Biggest Trees I have ever seen (in Germany) today. They were Maple trees that must have been six feet in diameter. These huge, cuddly trees lined most of the walkways. In other parts of the park were beautiful rose gardens, fountains, and delicious smelling Jasmine bushes. Forget that we didn’t drink the water. Just this experience in itself was totally relaxing and rejuvenating. 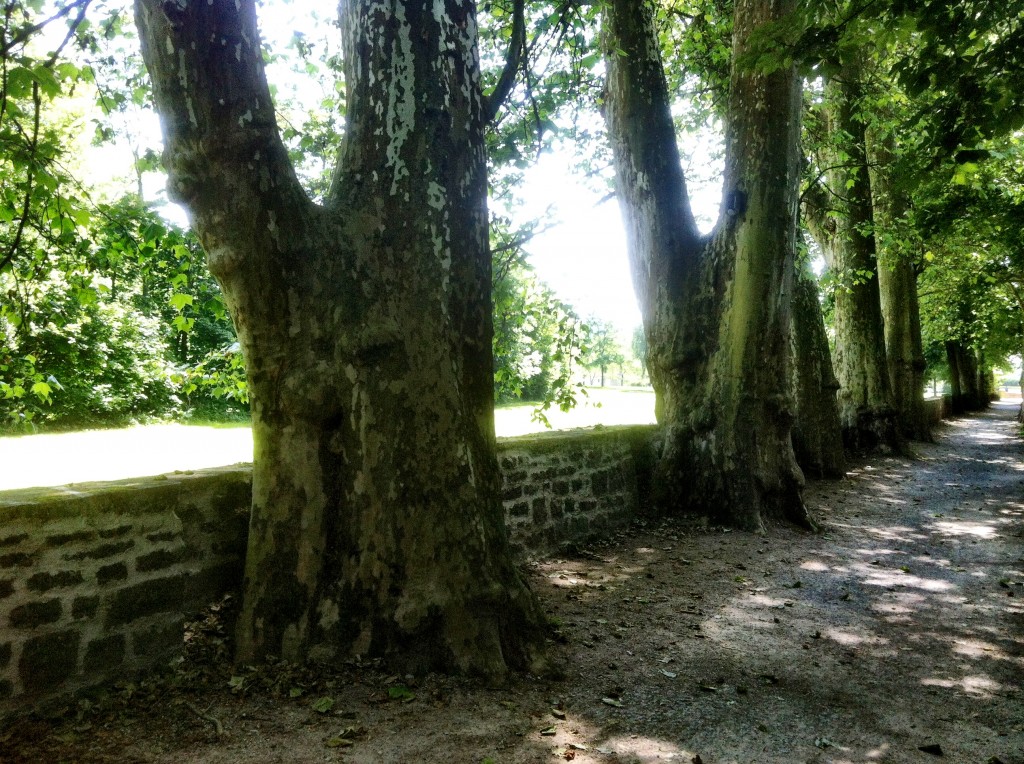 On the way to-and-from Bad Mergentheim we drove through lots of lovely little towns, like Rothenburg ob der Tauber, Tauberzell, and Creglingen. On the way home we decided to stop in Creglingen. You’ll be disapointed to hear that we did not tour the Thimble Museum. You will, however, be delighted to hear that we did tour HerrGottsKirche. Gott means God and Herr means Man, so I enjoyed making up the translation that this is the God is the Man Church. We toured the church because it is home (like St. Jacob’s Church in Rothenburg) to a magnificent, wood carved alterpiece by renowned artist Tilman Riemenschneider. (1460-1531) You couldn’t take any photos inside this church, and they wouldn’t do the artwork justice anyhow, but I wish I could convey to you how impressive it is to witness craftsmanship such as this. It took Riemenschneider 20 years to carve this monument, and one can only imagine how rudimentary his tools were in 1490. I think it’s impressive that the man even fathomed the project, let alone skillfully mastered the carving of every notch, crease, and cheekbone. The church wasn’t very large, and it definitely smelled like it had more people buried under its floors and in its walls, than visit it daily, but I am so happy that we stopped to see the masterpiece by the side of the road.

There is always something comical about my interactions with my neighbors, and today was no different. So I’ve got to tell you that I got a big kick out of hearing Ludwig refer to every slow driver (that he got stuck behind) as a Sunday driver. But he didn’t say, “damn Sunday drivers.”

Obviously they are the same thing, but one is English and one is German.

Also revelating for me today was that Katarina knows what a selfie is. Ridiculous, right? She is 75, doesn’t have a celullar phone, let alone and iphone, doesn’t have the internet, and still, somehow, manages to understand the term selfie. What is this world coming to?

Let’s get back to big cuddly trees and drinking water from the spring.