Easy. It’s not what you think, you dirty bird. 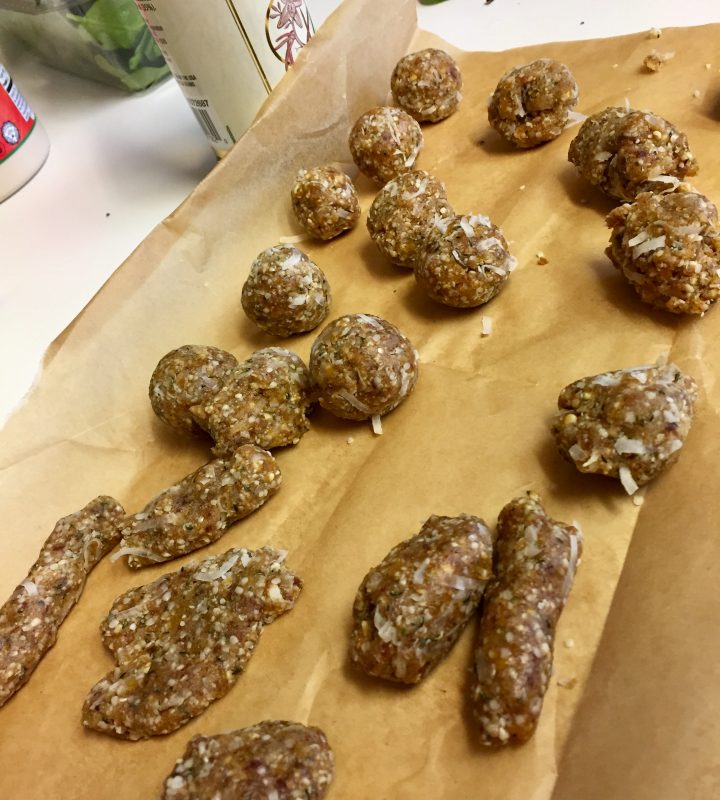 It’s a recipe I found and decided to make with Nina and Lila. It was so easy, and so fun for the girls, and so tasty, that I felt compelled to share it immediately. If I didn’t share this with you right now, as I have just finished putting my balls in the fridge, I’d forget and move on to 1,000,000 other chores and you would never know that I think you and your kids should make these too.

Here are the ingredients:

30 pieces of dried fruit…the original recipe called for 30 pitted dates, which I didn’t have, so we used 20 dates and 10 apricots.

1/3 cup coconut flakes…the original recipe said 2 tablespoons, but that didn’t seem like enough to me.

1/3 cup hemp seeds…the original recipe said 2 tablespoons, but that didn’t seem like enough to me.

Here is the process:

Put the dried fruit and cashew nuts in the food processor and whirl it until it is ground up and sticking to itself.

Transfer the mixture to a bowl and mix in the rest of the ingredients.

Pinch off hunks of the dough and roll it into balls…blissfully.

Put your balls in the fridge.

Almost-three-year-olds can totally run a food processor, and they actually think it is exciting. Since we barely measured, I can confidently claim that it doesn’t matter how much of what actually makes it into the processor from your toddler’s awkward dumping. Toddlers love the pulse function.

Since the mixture is very sticky it easily dumps from the processor to a bowl to mix the rest of the ingredients. So easy, a toddler can do it. And again, it doesn’t matter what makes it into the bowl during the second phase of dumping.

I mashed the dough together to make sure we had a good consistency for rolling, and I recommend that it is a step for someone with advanced levels of strength and coordination. Nina and Lila however, did all of the pinching of the hunks of dough and the rolling. Nina liked to roll into balls. Lila liked to roll into snakes or squish into pancakes. Any technique will work. You could probably even let your kid roll (or pound) it out and practice cutting it with a dull or fake knife.

The consistency of this dough was perfect to play with. I’d say it’s Nina and Lila’s favorite recipe to date. (I’ve been baking/cooking with them since they were two years old) Nothing was hot, nothing had to be exact, and it wasn’t very messy. It was almost like playing with Play-Doh, but they get to eat it.

I have to apologize to anyone that might want the original recipe I worked from, for more exact measurements and calorie-fat-sugar-protein contents. I don’t have it because the recipe was just a saved screen-shot, but you could probably “pinterest” it. I’m sure that’s how I found it. I will claim that there is a ton of sugar in these bad-boys. Dried fruit is high in sugar. These balls probably verge on candy, but at least it’s candy that your kids made themselves.

Have a great day! And if you try this let me know how it goes. I hope you had as much fun as we did.