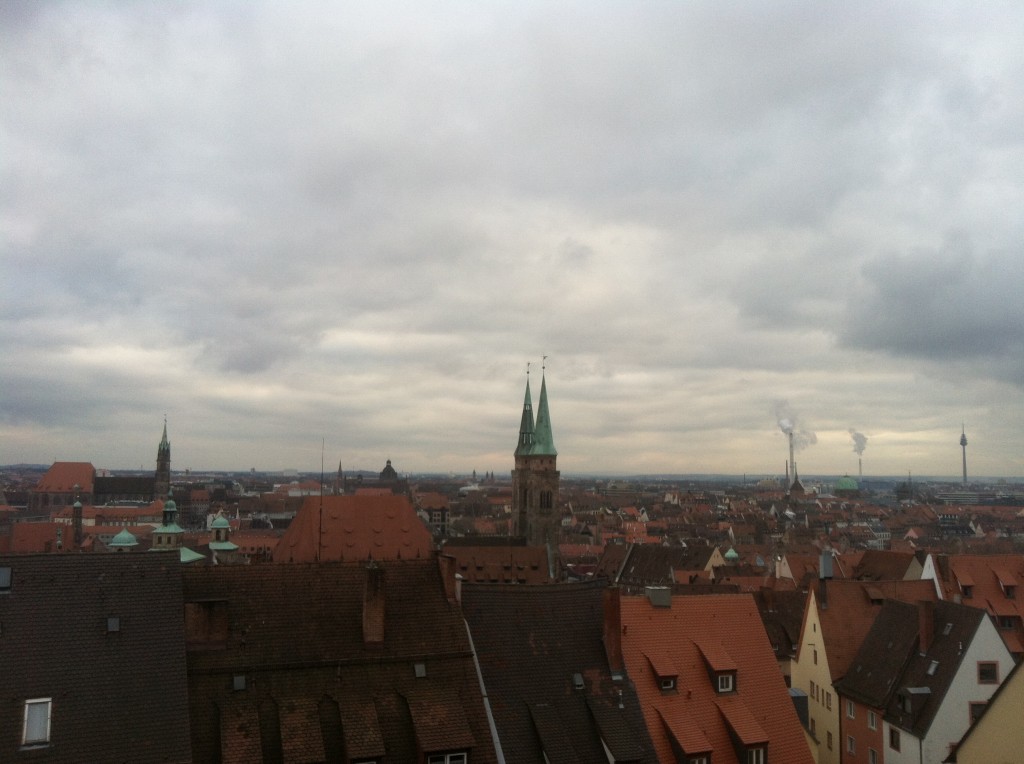 I went to a new part of Nürnberg.
Since my last post on this blog, where I admitted my “daily German discoveries” were slowing down, I’ve been feeling a bit guilty. So last weekend I planned an outing. I decided to visit the Albrecht Dürer House. Albrecht Dürer is Germany’s most famous Renaissance painter. The house he lived in (from 1509 to 1528) is located in Nürnberg. I did a little online research and found out that there is a museum ticket you can buy for 7,50 Euro and it’ll get you in to any of eight museums in the city. Since I love traveling and saving money, this is what I did. In addition to the Dürer house I visited the Tucher Mansion, the Kaiserburg, and the Albrecht Dürer House Restaurant for a midday beer and sausage goulash. 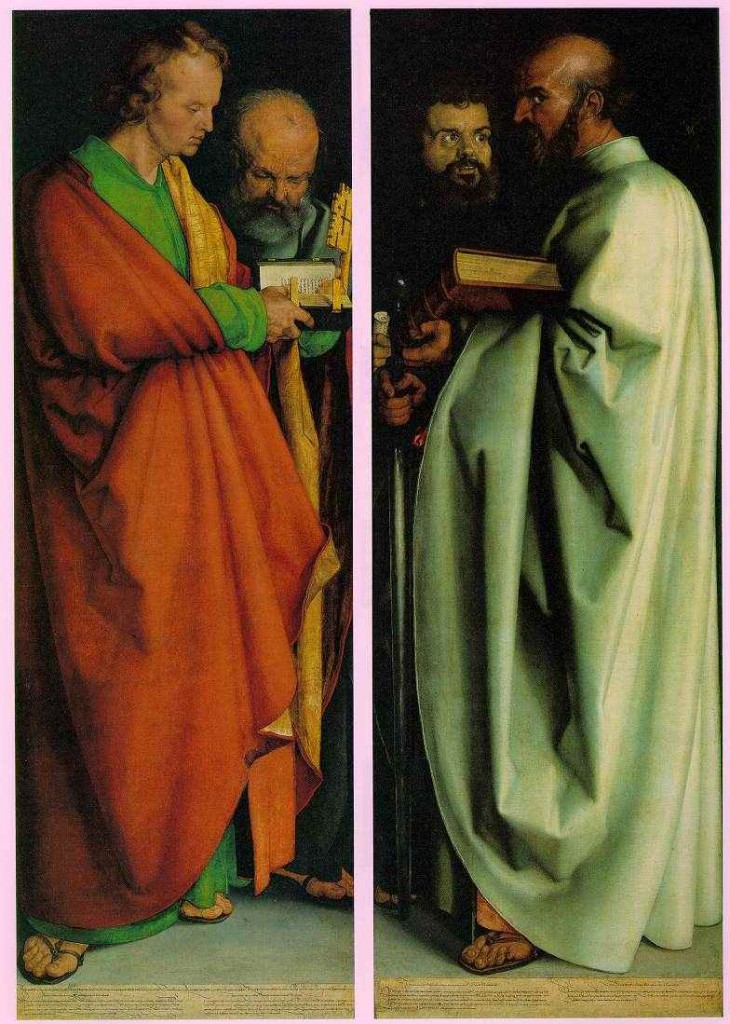 The Albrecht Dürer house isn’t terribly large, and only half furnished, but the audio tour is included in the price of admission and it tells a nice story. The house was built in 1420, and it’s the only completely preserved Gothic house left in Nürnberg. There is a gallery room in the house so you can see some of Dürer’s more famous works. Here’s the funny part though; none of them are originals. All of the Dureü originals are housed somewhere in Munich; Nürnberg only houses commissioned copies. Huh? 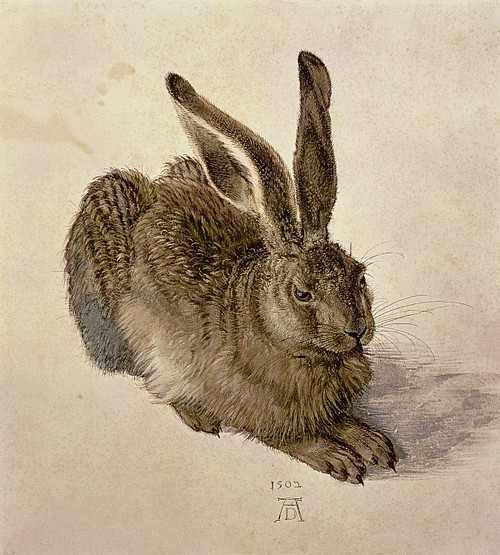 At any rate the works were lovely; some of the more famous being Adam and Eve, The Rabbit, The Prayer Hands, and The Four Apostles. The tour of the house was fun. The audio stated that the master bedroom was adjacent to the kitchen, with the master bed sharing the same wall as the kitchen stove. I found that to be a genius way to ensure your bed is cozy. Also a bit interesting; the latrine was in the kitchen. What kind of a contractor builds a bathroom in a kitchen? 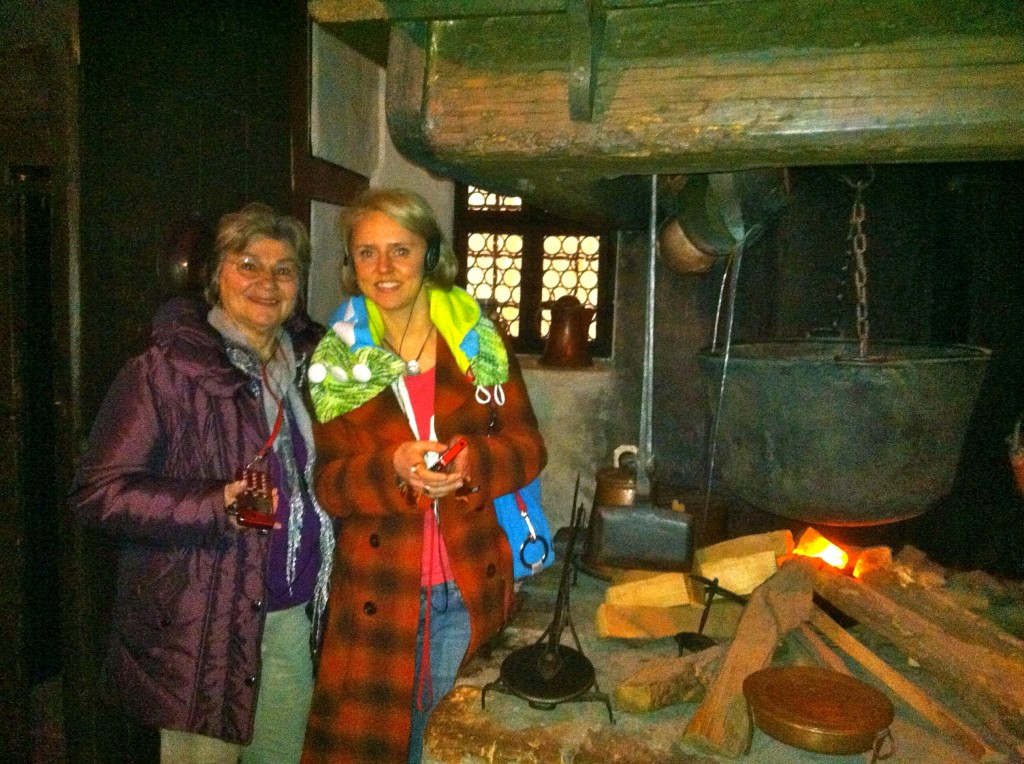 The potty is behind Katharina. Actually, come to think of it, it reminds me of an apartment where I once lived. 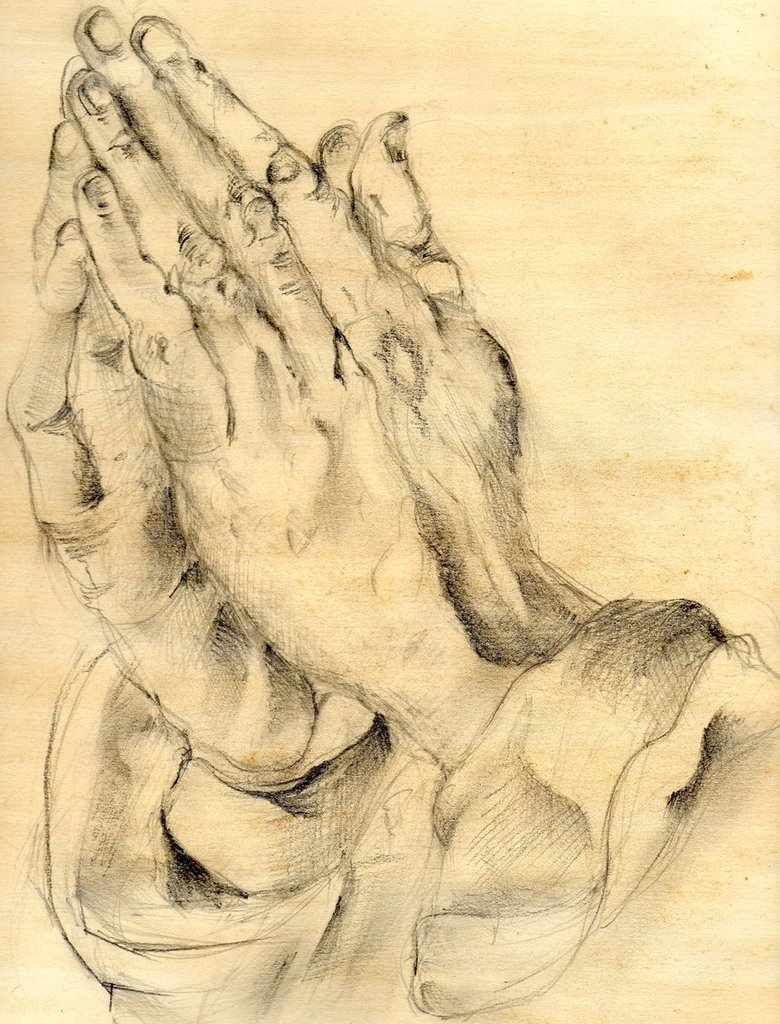 Seeing a recreation of the artist’s top-floor studio was great. It was huge, and full of powders and minerals for paint mixing, print machines, and scientific models and artifacts for reference. The audio guide stated that Dürer had interest in sharing his knowledge through writing. He attempted a few books on art and the science of drawing, written in German, but at the time there were not enough words in the German language to support the description needed. He was forced to scribe them in Latin.

The traveling between the Durer house and the Tucher Mansion is where you can find my culinary pit stop. As I said, we stopped at the Albrecht Dürer House Restaurant (not to be confused with the bar down the street) and had some wonderful (local) fare. I had the sausage goulash, which was wonderfully aromatic and full of peppers and onions; but I also tasted some Limburger cheese and sauerkraut soup. Of course it was all washed down with a beer. And why not a Tucher beer to keep with the day’s theme?

Tucher is the name of the beer brewed and bottled in Nürnberg. It’s a popular beer, with worldwide distribution, but our visit to the mansion was nothing to do with the beer. It was just a visit to a piece of residential history. Craftsmanship in old homes never ceases to impress me. What’s left (and recently renovated) of the Tucher Mansion is worth a look. It’s a shame to think that war has destroyed most of it, along with many other significant articles of history around the world, but nothing lasts forever and I’m grateful for what’s been preserved. The rooms in the house are tiny and dark, like all the old houses one visits, and the must in the air gets right up your nose as soon as you enter. The furnishings and the stories attached to the furnishings still found in the home are enlightening,and at times provocative. For instance there used to be a tool made and exported out of Nuremberg. It was called a “Nuremberg Schuh rule.” Basically it was a unit of measure ( a ruler) that was 27,84cm long. (Schuh is the German word for Shoe) I thought, for a second, that maybe this was the same length as a foot. It’s not. A foot is 30.48cm and the foot that originally fit the shoe for which the measurement was dedicated was (27.84cm) a bit smaller.
Moving along; the house is loaded with impressive wood work in the form of desks,closets, and paneling; and handmade tapestries. Many of the walls were also adorned with original portraits of the Tucher family. In viewing these portraits I couldn’t help but compare them to the image I’ve seen of the newest, and most controversial, portrait of Kate Middleton. I could draw some similarities between her portrait and those on display in the mansion. The backgrounds are dark, the figure shadowy, and the highlights a creamy, whispy, white. I know the artist, a Mr. Emsley, got a lot of heat for his portrayal of the young Duchess as vampirical, but I’m wondering if he was more attempting to honor traditional portraiture. At any rate, I hear he’s making a new one, so my opinions are of no value. (not that they are anyway.) Click the photo if you are interested in an article on the painting. 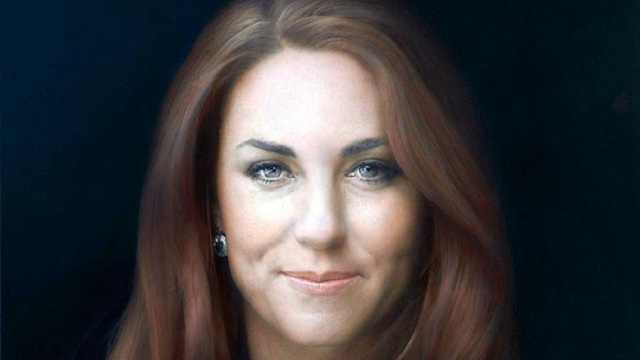 The Tucher Mansion is a quick walk-through with no audio tour.

When this tour was through, my fellow travelers and I seemed to not be yet worn out and were headed back to the car with a bit of time to spare. We decided to stroll up to the Kaiserburg on our way home. The Kaiserburg is the Imperial castle. It is located on a hilltop above the northern edge of the old city. It was home to kings from 1050 to1571. You can walk in and around the grounds for free. The view is amazing and it’s a great spot to stop for a photo. 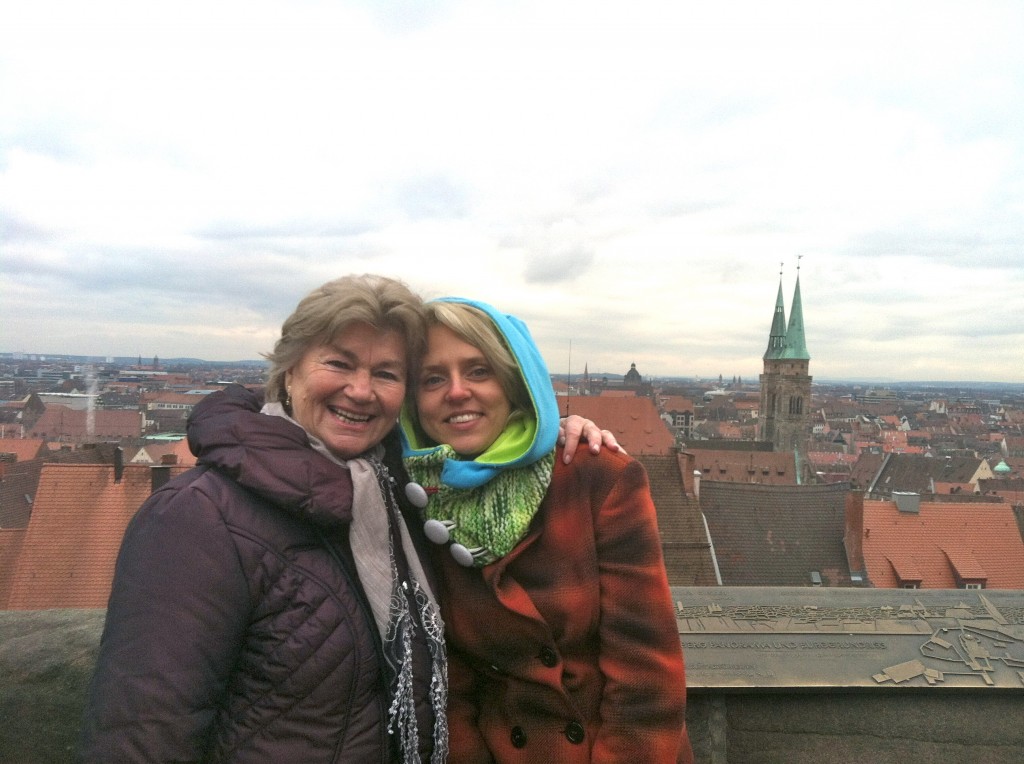 I love hiking. A long day of trekking through the woods, up and down the hills is one of my favorite ways to deeply inhale some fresh air and get my blood flowing. Sometimes I find walking through these European cities to be quite similar. Getting up and down slopes, steps, and winding streets can be more of a workout than a traditional hike…and with some extra amenities too. It’s a bonus to hike and pass by nice shops, with elegant window displays, in that area. Luckily our day spent in this area of Nürnberg was a Sunday. The shops were closed, and thank God, otherwise we would have gotten seriously sidetracked. On the western side of the Kaiserburg I found an awesome beer garden. It has an outdoor stone keg on a large patio, surrounded by really old and tiny historical dwellings. (like real Hansel-and-Grettle-ish) I think the garden is called the Hexengarten, but don’t quote me. Hexen means witch in German so it’s like the witches’ outdoor bar…pretty cool. (I know a few people who’s birthdays are around Halloween that would love to celebrate here) The Hexenheller is currently closed. They claim to be renovating. I hope the renovations are complete by Spring. I want to drink fresh beer from an enormous stone keg while soaking up some German sun.