Phil doesn’t cook a lot, but he is good at it. In actuality he prefers grilling, and despite the infrequency with which he prepares meals he does have a signature dish. He grills a turkey. He’s done it seven or eight times by now, and each time it gets more delicious. He just recently grilled a turkey for us here in Ansbach. Our neighbors Katharina and Ludwig came down, we were joined by a few other friends, and Phil’s tradition continued.
During dinner Ludwig said the turkey tasted like butter. He couldn’t stop complimenting Phil. Ludwig thought you couldn’t grill a turkey. His thought isn’t terribly surprising considering it’s virtually impossible to buy a turkey in Germany. I know all about it. I’ve been trying for a while to find one. The best I could do was a 25 pounder from a gourmet butcher that would have cost over $150.00. I canned that idea and just bought an (appropriately sized) Butterball from the Commissary for a tenth of the price.
Phil had the bird on the grill by 11:00, and Katharina and Ludwig came down by noon. Katharina and I did a bit of cooking together. It was fun. She wanted to make American baked beans. So we did…sort-of. I’d say that we made baked beans in the 1950’s way. We sauteed onions and bacon. We then put them in a casserole dish with a huge can of prepared baked beans, topped the dish with hot sauce and Worcestershire, and baked the crap out of them. For those of you who don’t know me, that is not how I normally cook. Luckily for me, and the beans, Phil’s turkey took center stage as we all went back for seconds and thirds.
Oh… but the mushrooms! One of our dinner guests was vegetarian so Ludwig brought down some fresh wild mushrooms. He had been foraging in the woods the day prior and picked some choice Steinpilze. (stone mushrooms) They were (pretty much) as awesome as the turkey. The Steinpilz is a big mushroom, so it’s meaty, and you can’t beat the flavor of something wild-caught. As we happily dined on the boomers we all admitted to Ludwig that we wished we could go mushroom hunting with him. We finally broke him down and he acquiesced. He said he was going to go on Monday and we could go with him if we liked. I immediately cleared my Monday morning schedule.
As if we didn’t already think Katharina and Ludwig were the cat’s meow, they came to dinner bearing gifts for us as well. Katharina brought me a homemade parsley mustard and Ludwig brought Phil a beer stein. As you might imagine, it was no ordinary beer stein. It’s an antique stein that his mother gave him as a gift when he married Katharina. It has a map of their hometown on it and it is decorated with clay flowers. It’s old, and beautiful, and unique, and Phil was absolutely stymied that Ludwig would give it to him. I have to admit I was a bit stymied myself, but when you think about it you realize that he is happy to have people to share stuff with.
After we finished all of the beer in the house Ludwig decided he had one more gift for Phil; his Lederhosen. Ludwig’s Lederhosen are made from Alaskan moose leather; it’s rare, soft, thick, in gorgeous condition, and warmer than you’d ever need a pair of costume pants to be. Ludwig has a passion for the woods and hunting; it would be his life’s dream to be able to hunt moose in Alaska. He never has; I guess he just settled for pants instead. Ludwig has only worn the pants a couple of times and claims he will never wear them again because he is too old. The pants fit Phil perfectly. As he showed them off for us he found an old knife in the pocket. Ludwig, after telling him it was over 150 years old, insisted that he keep that too. Phil and I had never planned on buying the Lederhosen/Dirndl outfits here. I think I get too cold for drinking beer in the fall in a dress with my boobs popping out, and Phil is a jeans-and-flannel kinda guy. Our problem is that we are terribly bad at saying no to Katharina and Ludwig. The same evening Katharina gave me a hand knitted vest with antler buttons and a wanderer’s pin because she said it was too small for her and looked better on me. Sometime in the near future I’m sure Phil and I will complete the costumes and go to a festival properly dressed.

The following Monday Ludwig and I headed off to his favorite mushroom picking spots. The weather was a bit chilly and rainy. It’s no one’s favorite weather except Ludwig’s. He loves rain because it is good for nature. I have heard many tales (and myths) about people who pick mushrooms. In particular I’ve heard that they hate sharing their spots. This is not the case with Ludwig. He says the spots are for everyone, but you once you get into the woods you better know how to get out of the woods. For this reason, and also that I know nothing about wild mushrooms, I think it’s better that I stick with Ludwig on my mushroom adventures. In the woods there were mushrooms everywhere. Once you start looking for mushrooms of a particular kind you begin to realize how many different types of mushrooms there actually are. As we all know; of all the many kinds, cute and colorful as they are, most are not to be eaten. Ludwig and I were three hours in the woods hunting for the Steinpilze. We returned home with about 3 kilos. (6 lbs.) At the farmer’s market one kilo of Steinpilze go for €20,00. I felt like we were carrying baskets of gold into the house. 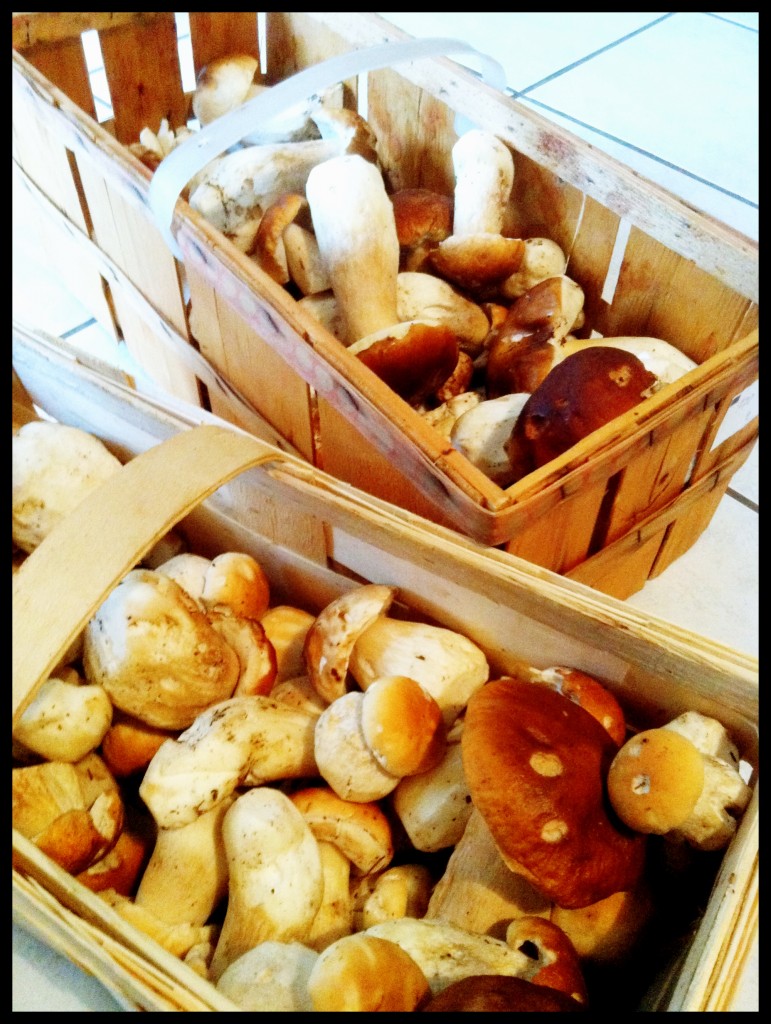 Just as much work as the mushrooms were to forage, they were to clean. Luckily, Phil was eager to help. We spent another three hours brushing, scraping, and slicing mushrooms. By the time we were finished we had to throw away ¼ of my catch due to some of the mushrooms already being a worm motels. It is quite a moment of frustration to find worms in food that you worked hard to obtain. Luckily more than half of the mushrooms were edible, and eat some that very evening for dinner we did! With the rest of the mushrooms we filled some freezer bags, but also dried some in our oven. Oven drying mushrooms was the third lengthy chapter in my mushroom saga. The good news is I learned a lot and we’ll have Steinpilze through the winter.
One of the biggest lessons I was reminded of was how rewarding it can be to complete tasks that require a lot of time. They aren’t hard, per say, they’re just tedious. Can I buy Steinpilze at the market? Sure, but it’s way more satisfying to have them be mine. Everytime we eat the mushrooms from here forth we will be eating the entire experience; and it will taste that much richer.

I think it’s the same with Phil’s turkey. It takes more than one day to complete. First he thaws the turkey for a couple of days; turning it religiously in the fridge. He then brines the turkey for 12 hours. He then cleans it, trusses it, and starts the grill. It cooks for a couple of hours on a charcoal grill; so Phil is frequently outside with it; checking the temperature, lighting more coals, basting, and pouring some of his beer into the drip pan. After the turkey comes off the grill he makes gravy from the drippings. After we’re done eating the turkey he makes a broth from the body. After the broth comes the turkey soup. Then, we eat turkey for five more days. It’s a dedicated process; dare I call it a divine epicureal sanction. In giving nutrition this level of attention I think you give yourself (as well as the ones you love) a wonderful gift. Eating becomes a celebration as you savor, not only the flavor, but the hard work. In this fashion, every meal is Thanksgiving.