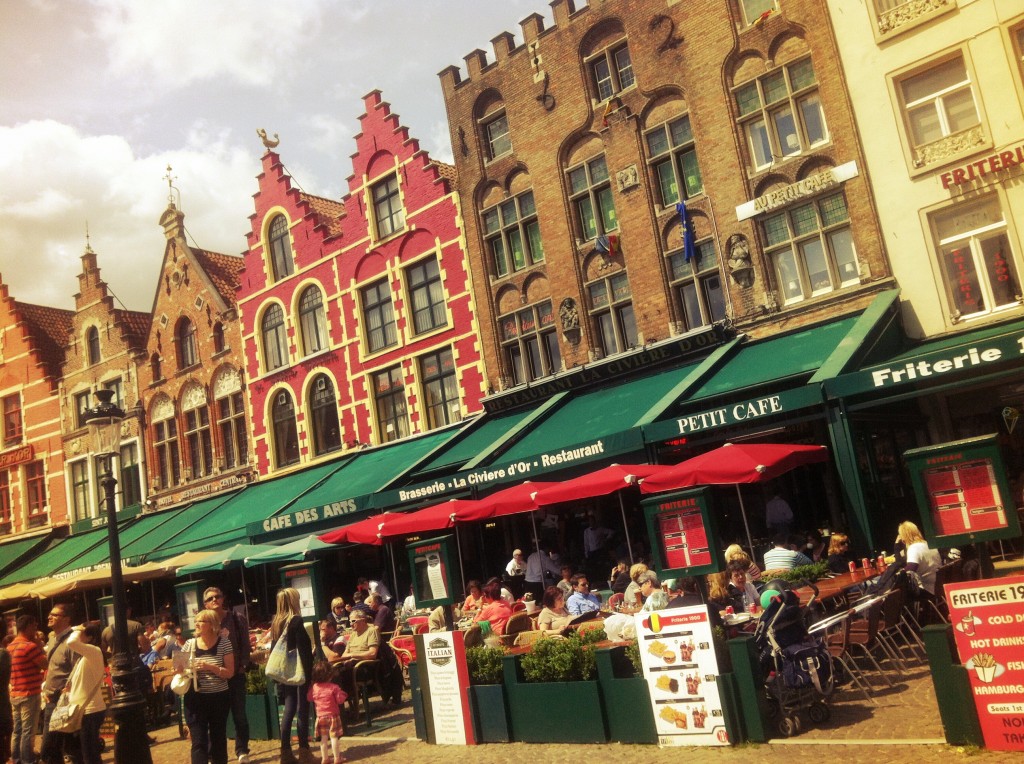 There is a knowledge to traveling. As helpful as guidebooks and online research can be, it isn’t anything you can read. True knowledge of how to travel and really enjoy your vacations requires a skill set only obtained by frequent traveling and not repeating mistakes. In our early years of vacationing, trips for Phil and I were hit-or-miss. Over time, especially in the past three years, I feel like we’ve turned pro.

We just went to Belgium, more specifically Brussels and Bruges. It was an awesome four days, and we’ve come home feeling like it’s been our favorite vacation yet. (No offense to France or Switzerland)

All of the reasons that have made this trip so successful were born out of correcting mistakes we’ve made in the past. The following is a couple of do’s, and a few don’t’s, in an attempt to share our recent adventure and give you something to think about for your next holiday.

1. Go while there is something going on. We went to Belgium during the Brussels Jazz Marathon. It was amazing. There were four main stages set throughout the city, as well as over 70 clubs and bars showcasing performers. There were more than 200 free concerts in three days! Our favorite band was Zule Max, an all-wome latin jazz band. They put on a fantastic show. 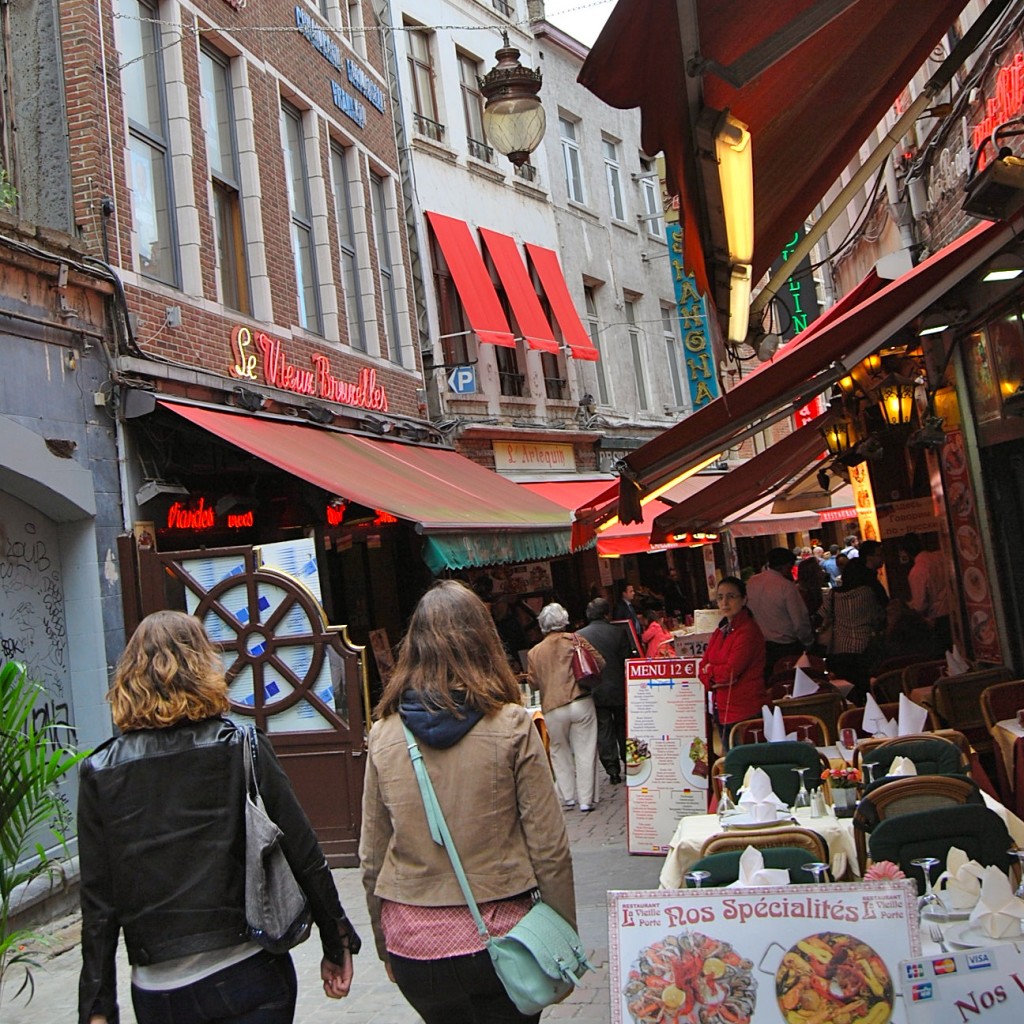 2. Don’t eat on “Restaurant Row”. In fact, don’t even walk down restaurant row. You’ll get solicited worse than at a flea market in Indonesia. Try the food, yes, but don’t try to find the best restaurant in the city. Having your heart set on the best mussels or Flemish stew you’ve ever had can be a recipe for disaster. You can be so easily disappointed and then where is your appetite for the rest of the trip?

I read in a guide book that Rue de Bouchers was “the belly of Brussels” and a great place to stroll for the perfect restaurant. Wrong. While it is true that there is an abundance of restaurants on this street, the owners absolutely battle for business. If you accidentally stop to look at a menu, or make eye contact with a server, you will be forced in, forced to accept a beverage, and forced to order. And in the event that you tell the maître d’ that the menu is too expensive for you he will be ready to counter-offer with 2 or 3 other menus of varying price, killing your faith in the quality of his dishes with each sacrifice. It’s distasteful to say the least. Luckily you’ll spot an Indian restaurant around the corner and duck into it for rescue. You’ll be warmly welcomed, have a delicious meal as usual (with sauce you’ll want to bathe yourself in) and leave feeling quite pleased with yourself.

In Belgium definitely eat the waffles. My first waffle was so, surprisingly, delicious I nearly fell over. It was, seriously, the best street food that has ever melted in my mouth.

Only eat the fries if you like fries. If fries aren’t your favorite, Belgium won’t make you fall in love with them.

Another fun trick is to go to the supermarket. No two countries have similar grocery stores. Walking through the aisles is an adventure in itself, and they always have great take-away.

3. Keep the museums to a minimum. Despite me being a lover of art and art history, we’ve got a pact that we only go to one museum. If we’re in a city for more than two days we might go to two. Museums are packed with information. Too much slow walking, reading, weaving in-and-out of people, viewing, headphones, and learning will turn anyone, even an enthusiast, into a zombie. Although, Phil did learn on this trip that the museum benches are a nice place to crack your back.

While in Brussels we visited the Musée d’Art Ancien. As you may have already read; in addition to this museum housing my favorite painting, it is also home to one or two other heavy-hitters. It was an hour well spent. 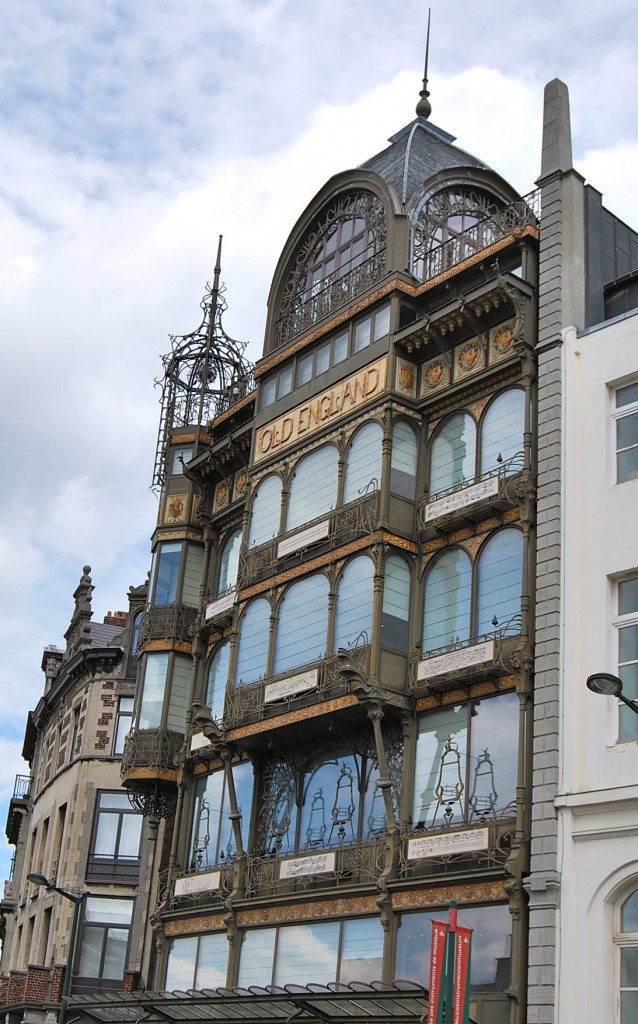 Since we love music so much, we were quite tempted by the Musée des Instruments de Musique. It’s a 19th century department store (called The Old England) turned museum that also happens to be an incredible example of Art Nouveau architecture. Today the museum is home to over 6,000 instruments; from the ancient to the exotic. It’s main attraction is the prototype instrument by Adolf Sax… that’s right. The Saxophone was invented by a Belgian. The instrument actually celebrates its 200th birthday this year. Despite all my apparent enthusiasm we didn’t tour the museum, but we did have lunch on the roof.

3. Get a tour. And the museum tour doesn’t count. Get someone to walk you around the city. It’s refreshing. Our favorite tour in Belgium was the Beer Tour we went on in Brussels. Maybe it sounds cheesie, but it wasn’t. We had a terribly knowledgeable guide, fun group of people, three memorable stops, and nine fabulous beers. We drank Abbey beer in an underground tavern. After that we visited the Cantillon brewery in Brussels and learned all about how gueuz, kriek, and lambics are made. We put the finishing touches on our buzz at Chez Moeder Lambic, one of my favorite bars in the whole world. The homebrews and the extended beer selection here will delight your tastebuds…right down to the minute you realize that they actually serve Schlenkerla Smoked Beer from Bamberg. (It really is silly. I find this beer everywhere I go; Bamberg, Nuremberg, New Jersey, and now Brussels. I guess it’s as good as I think it is.) 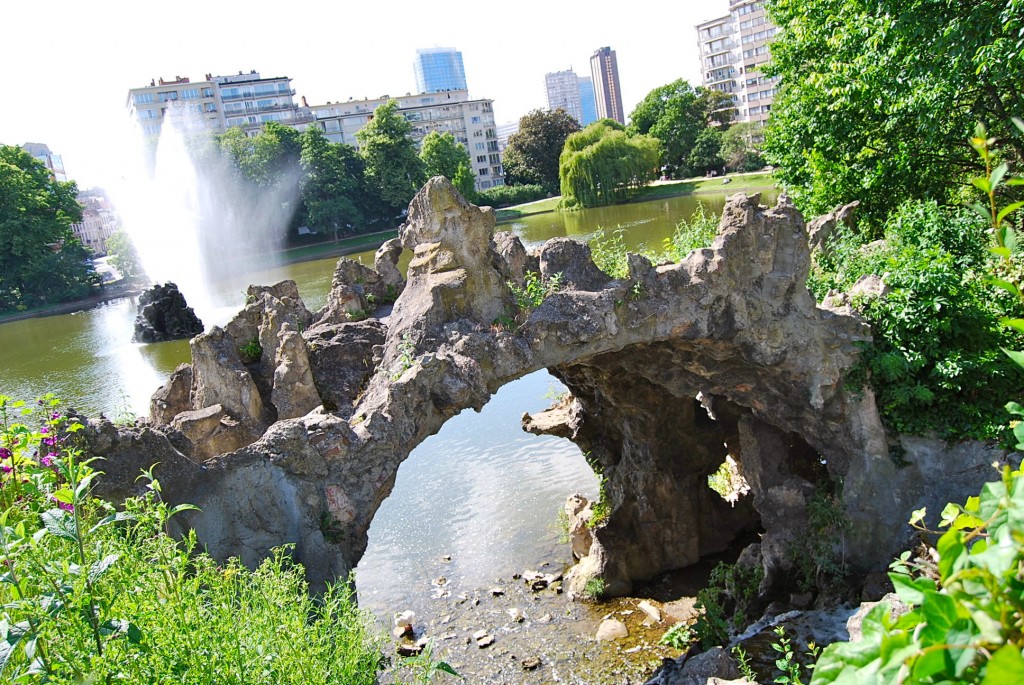 4. Find a park to nap in. Hiking around a big city all day, seeing the sights, photographing at every step, tasting the treats, and having a beer with an enormous lunch can make any traveler pretty sleepy. Don’t waste time going all the way back to your hotel. If it’s a beautiful sunny day nap in the park instead…like a local. It’s refreshing, beautiful, and you’re still in the thick of it. Just stroll on over and pick your favorite spot of lawn next to all the college kids and exchange students who are drinking wine out of a bottle, smoking, and listening to cool music. They’ll keep an eye on your camera bag and backpack while you doze. Don’t worry. They’re totally trustworthy.

5. Don’t visit a town just because a good movie you saw once was filmed there. In case it’s not obvious, this is why I wanted to go to Bruges. It’s actually a very lovely town, but it’s insanely crowded. There were just as many tourists In Bruges as were in Brussels, but Bruges is only three kilometers squared. We got to Bruges on Sunday morning. Our bike tour began at 10:00. The town was still fast asleep. Starting in the Alley of the Blind Donkey, we wound up-and-down-and-around every street of this small town so that 3 kilometers felt like 20 kilometers. We saw beautiful architecture, gardens, windmills, and delighted in some interesting anecdotes. Our wonderfully serene tour ended at the picture-perfect, oldest pub in Bruges, Vlissinghe. From within it’s early 16th century walls we had no idea that the city had woken up around us. We left the tour and headed back out to packed streets, overflowing squares, open souvenir shops, and a queu to climb the bell tower. Bruges was still charming, but less-so than it had been a few hours prior. We ate some croquettes and retreated to the inside of an art museum. The Groeninge Museum was nice and small…just the way Phil likes his art museums. Their main attraction is The Last Judgement, painted by Hieronymous Bosch. I am a huge fan of Bosch. His work is perverse, and grotesque, and suggests that mankind has created a hell on earth…but in a slightly humorous way. To me he is a predecessor of the Surrealist movement that wouldn’t be until over three centuries later. The Last Judgement isn’t in the best condition, so it isn’t much to look at, but since it has now been the inspiration for a blockbuster film you gotta check it out. 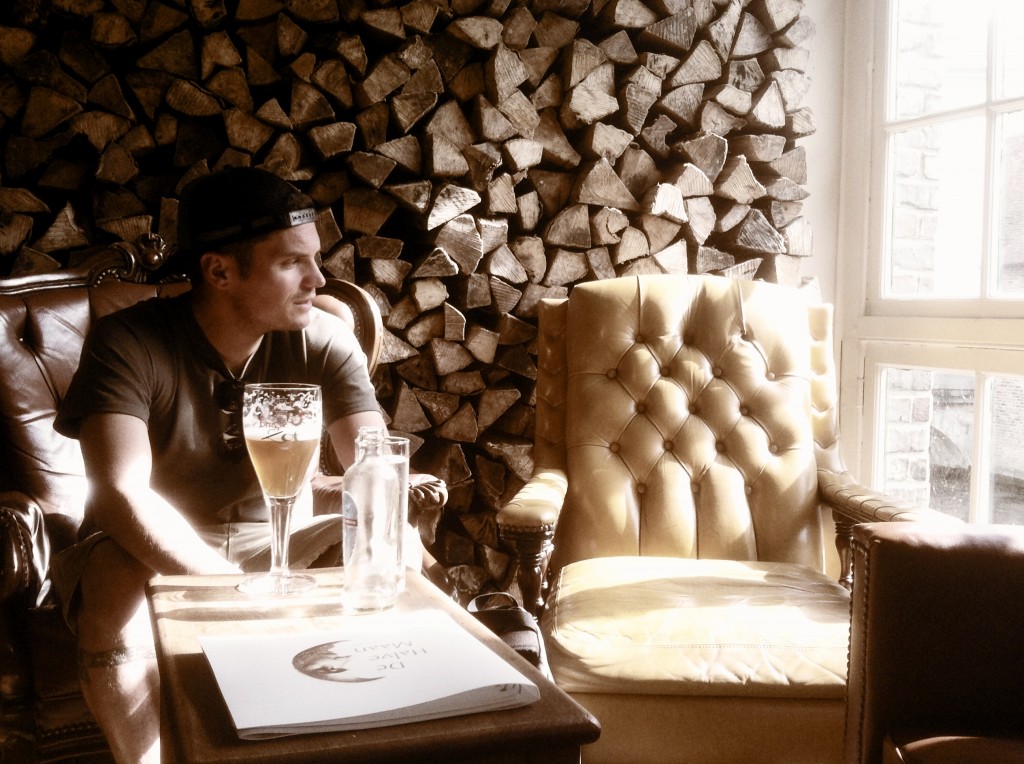 Luckily Bruges has a fabulous Brewery not too far from the museum. It’s called De Halve Maan and they are brewing a delicious beer currently called the Brugse Zot. Like most things in Bruges the brewery is picturesque and has a quaint lounge overlooking the canal.

6. Make sure the people are nice. I don’t think I’ve ever traveled to a place with friendlier people. And not friendly-like they’re trying to sell you something (like in Bali) but genuinely friendly. This includes the locals and the tourists alike. Phil and I were chatting left and right. I’d read in a guide book (and online) that, in Bruges, the bar to go to is t’ Brugs Beertje. They said the bar’s got a story book for a beer menu and a terribly helpful staff. They also claimed the local patrons were just as friendly as the staff. That sounded like a load of bologna to me. What locals enjoy hanging out with tourists? Belgian ones, that’s who. 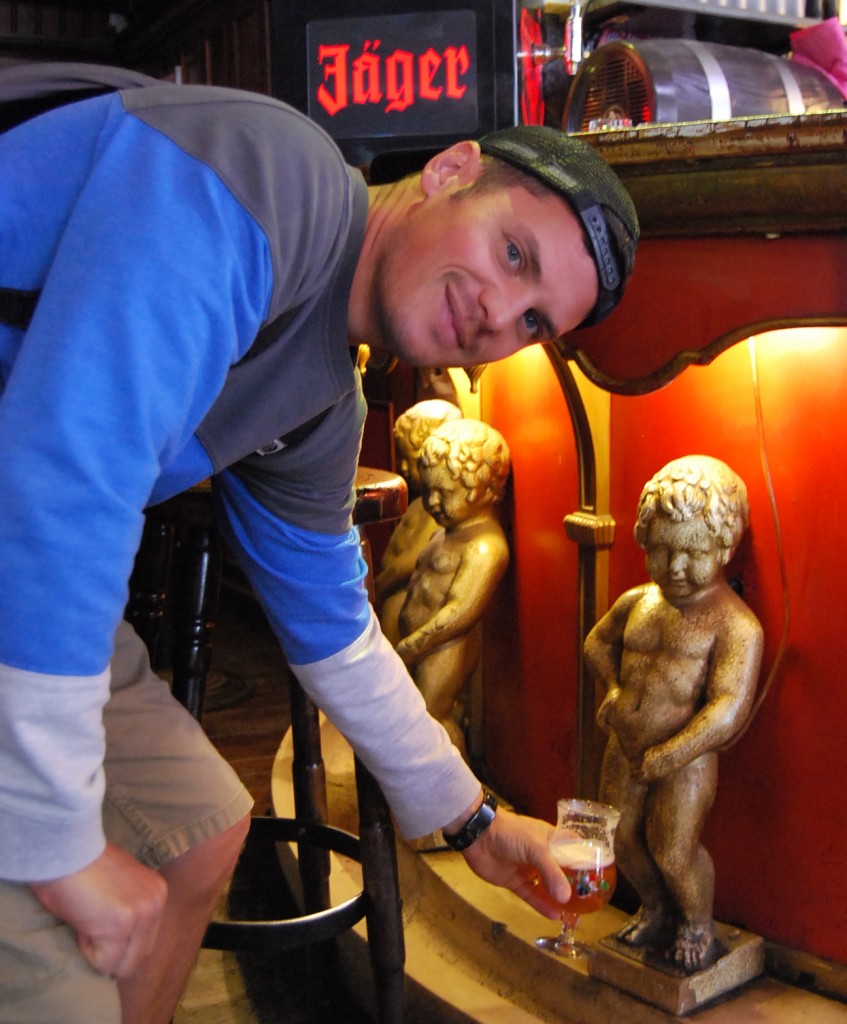 7. Get Funny. Every culture’s sense of humor is a bit different, especially when you are talking Americans and Europeans, but the Belgians had a sense of humor we could get into. In particular we really enjoyed the city’s favorite monument, the Mannequin Pis. It’s not a very large statue, but it does attract a crowd. (and no the crowd isn’t just spilling over from the great bar across the street.) The real truth of the matter is that everyone, not just Belgians, love the Mannequin Pis. Dignitaries from visiting countries apparently bring this little guy clothing each time they visit. The Mannequin Pis has over 800 outfits, to include a Samurai, a Santa, and even an Elvis costume. I wish I had known the custom. I would have brought him a Florida Scarf!

Did you think the above photo was the actual statue? 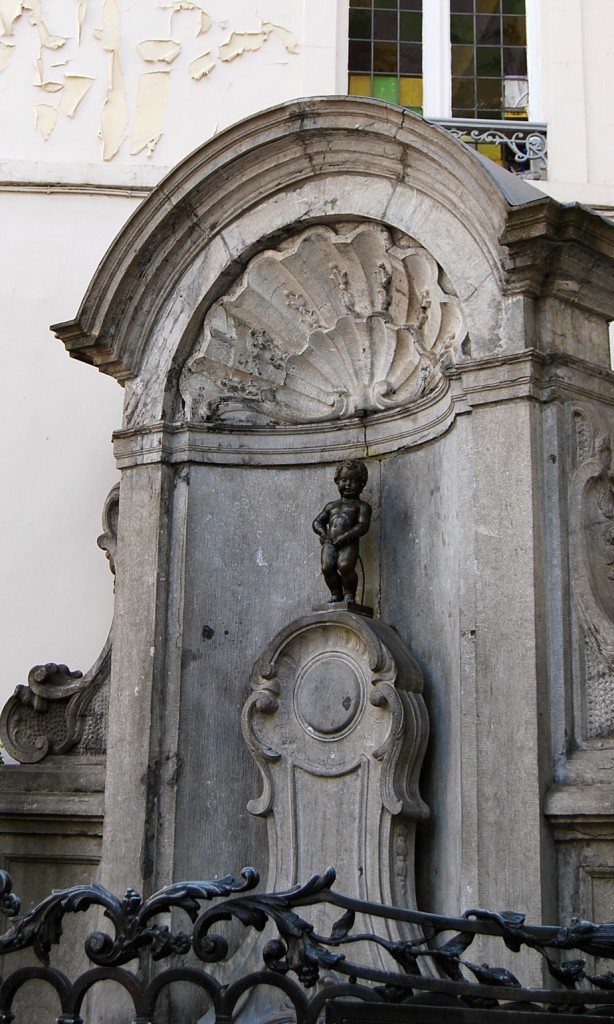 Oh man. It was a great trip.

8. Don’t forget to check your pants pockets when you do vacation laundry. Maps make a huge mess in the dryer. And it’s especially a bummer when it’s a map that you took out of the guidebook you rented from the library and had planned on putting it back where you found it.