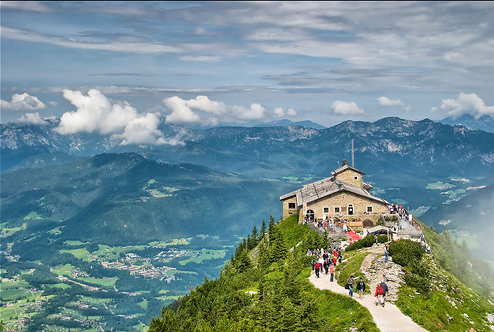 When you travel a far distance to visit a landmark for its amazing scenery and views; you’re taking a gamble. When you do it in the German Alps in late summer; you’re not even playing with a full deck. But all you need is good company, a good attitude, and an extra set of dry clothes; to ensure your weekend isn’t a total fold. The above photo is what we wanted to get. The photo below is what we got. 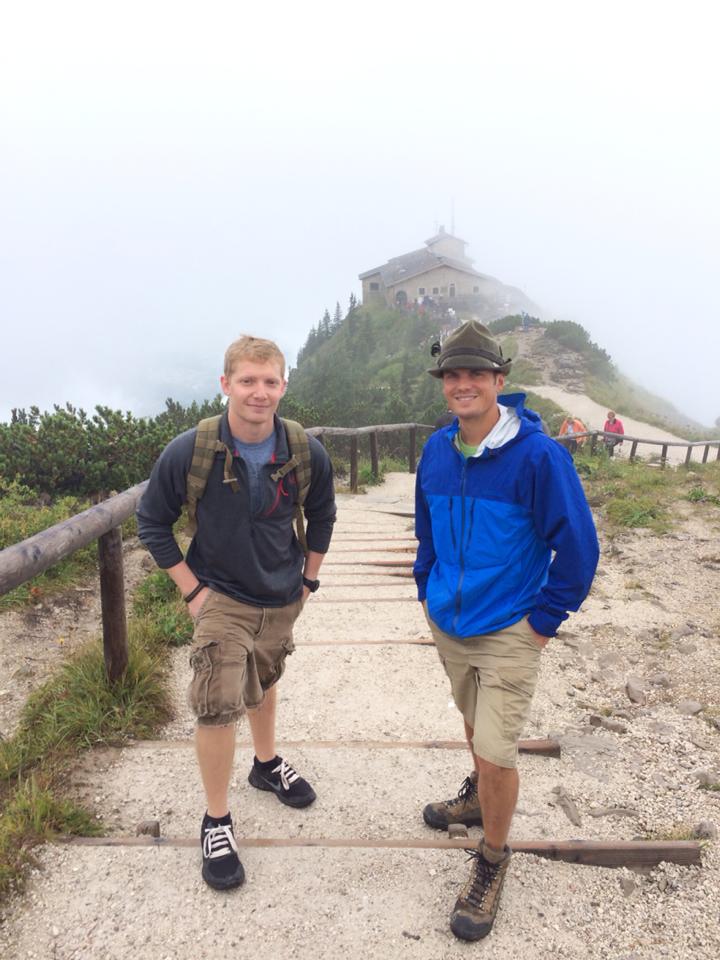 We traveld to a section of Germany in which we had not previously spent any time; the southeast corner, at the very end of the (310 mile long) German Alpine Road. The region is known as the Berchtesgadener Land. It’s home to the second and third largest mountains in Germany, salt mines, and the Konigsee (King Lake); as well as the remnants of the home-away-from-home of the late Adolf Hitler, known as Kehlstein.

Our first day in town we headed straight for the tourist trap…a postwar legend…a house that sits at 6,017 ft in the sky, built in 1938, only accessed by a steep mountain pass and an elevator tunneled straight up through rock. The Eagle’s Nest; once gifted to everyone’s least favorite leader for his 50th birthday, by his secretary. (Wow. A house for a gift? That’s one well paid secretary. Way to go Mr. Bormann) The Eagle’s Nest was a diplomatic meeting house during the war, but has been open to the public since 1952. Today it remains a dazzling architectural marvel, as well as a physical representation of the insanity of the political party (and its leader) of the time.

Normal tourists access the Eagle’s Nest (which is now a restaurant) by getting on a bus, that leaves from the base of Kehlstein parking lot. The bus follows the original, 6.5 km long, treacherous route, as it climbs over 2,500 feet to it’s destination at the summit. Slightly derainged tourists can set out to reach the top via the hiking trail. While it’s incredibly steep, and vertigo is inevitable; you will find that the walk will not take you as long as the trail signs claim. Thank God. When we began the sign said it would take 4 hours. I’m glad we didn’t heed the warning. We got to the elevator in just under 2 hours. Personally, I think they put 4 hours on the sign to sell more bus tickets.

At any rate, it was a terribly satisfying workout. Our reward at the top was not a gorgeous view, as it was ridiculously foggy, but it was to encounter an interesting group of WWII veterans, ride the “golden brass” elevator to “the summit of power”, and to drink a beer where some of the fowlest minds the world has ever known had once gathered. 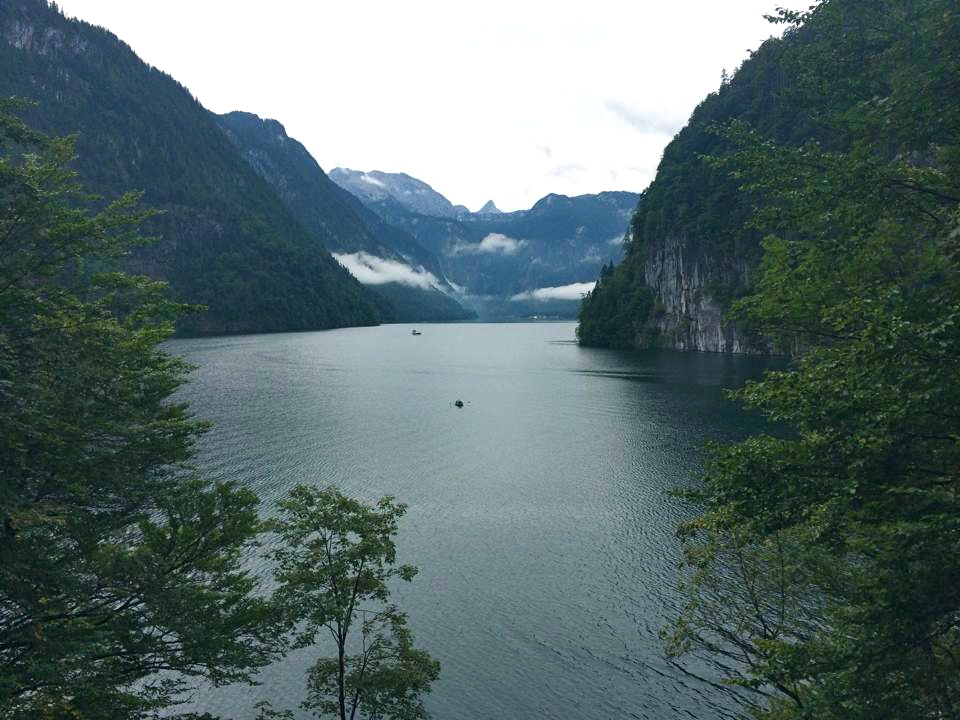 The next gloriously-cloudy-foggy-rainy day, after a typical European breakfast of cold cuts, pretzel bread, yogurt with granola, and delicious coffee, we set out on our next adventure. From our hotel in Schönau am Konigsee we were able to walk 2 km to the Konigsee itself. It’s a fabulous lake. They say it’s fjord-like, as the lake is surrounded on three side by mountains. It’s quite remarkable. The mountains literally shoot straight up from the water bank…no beach. There’s even a miniature waterfall that runs, quiet peacefully, off the mountainside into the body of water. After hiking around the lake a bit we decided that you can not visit such a charming lake and not rent an (equally as charming) wooden rowboat. Well, no sooner had we paddled out into the center of the large lake, than it started to drizzle, a breeze came in, and the sky got a bit darker than we would have liked. We didn’t even have a chance to ponder why we didn’t scan the horizon before setting off, and we were caught in a downpour. The rain was pelting us so hard that I couldn’t even look up. I’m surprised, yet thankful, that my companions were able to continue to paddle. By the time we reached the dock we were soaked through, and frozen, and still needed to walk 3km back to our car. That was 3km more of getting rained on. By the time we got to our automobile I felt like a drowned rat, and I had lakes the size of the King Lake forming in each of my shoes. It goes without saying that we immediately changed into the driest clothes we had, and hit the road for home with the car heater on full blast.

Had we had more time in the Berchtesgadener Land, and had the weather been a bit more cordial, we would have hiked through the Berchtesgaden National Park, maybe visited a salt mine, or rode another summer rodelbahn, but all that will have to remain unvisited, at least by us. I’d keep it in mind for your next vacation though. Just make sure to pack your raincoat, and actually bring it along with you on adventures.