Since our time left here in Germany is rapidly waning, Phil and I have begun to think more seriously about a souvenier. All the great times we’ve had, photographs we’ve collected, language we’ve learned, and the dirndl and liederhosen we’ve purchased just aren’t enough. I’ve always thought I’d love a large kuckoo clock; but Phil insists that they are too expensive and delicate to trust the Army to securely pack it and move it for us another 2-10 more times. I agree.

I thought about getting a bavarian flag. It’s got a colorful, and regal design; but we’d never fly it. It would probably sit, nicely folded, in a trunk in a room somewhere with all of our pictures. I like souveniers I can actually use. Then the idea came, as if sent from the heavens, during a friend’s Fourth of July party. (of all events)

A Fest Table! Yeah! Great idea. A fest table is completely German…and completely useful. I wondered why it hadn’t occurred to me sooner.

In the good chance that you, the reader, do not and have not lived in Germany, and are having trouble visualizing a fest table, allow me: 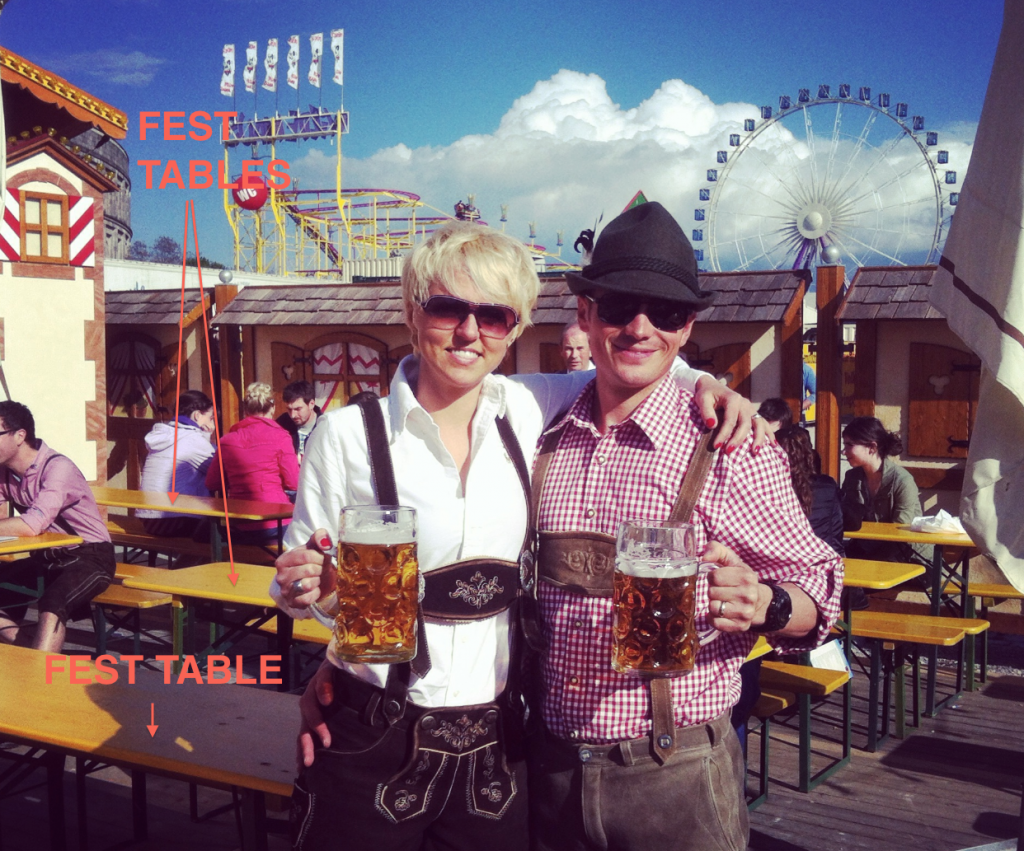 Any outdoor event is not complete without rows, and rows of these tables and benches packed as close together as humanly possible. And considering Germans party outside ten months of the year; the fest table is practically a staple of daily life. The tables are made wood and metal; big, heavy and indestructable. They are unbelievably useful, easy to store, and (in actuality) also unbelievably easy to injure yourself on. There is something to this dicotomy of the fest table persona that I find charming. The injuries come in the form of pinching your finger during setup or breakdown, having a table dropped on your foot during transportation, (maybe that’s why Germans always wear socks with their sandals) or being the last one dancing on the edge of the bench and (like a see-saw) it tips up from the opposite end and you fall off…don’t worry you’ll have drank enough beer by then that you won’t feel a thing. 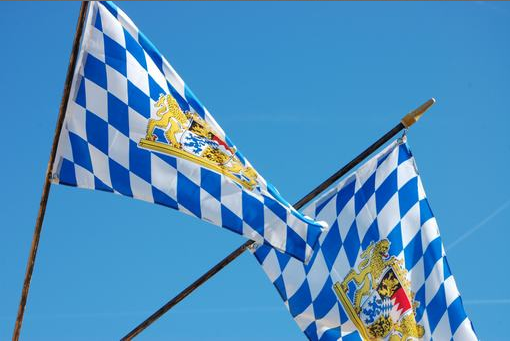 I decided however, that I didn’t want just a run-of-the-mill table. I wanted a custom fest table. Being a painter, I figured it would be easy to customize it myself. And since I am attracted to the Bavarian flag I decided to paint my table with the Bavarian Coat of Arms. I have found that in this region, the pride overfloweth. People living in Franconia, and Bavaria, love to decorate, and accentuate, with items of hometown pride. Especially so by flying their flags in as many places as possible.

Unllike many of my ideas for souveniers; Phil really liked this souvenier idea. So we bought a table, and I painted it. 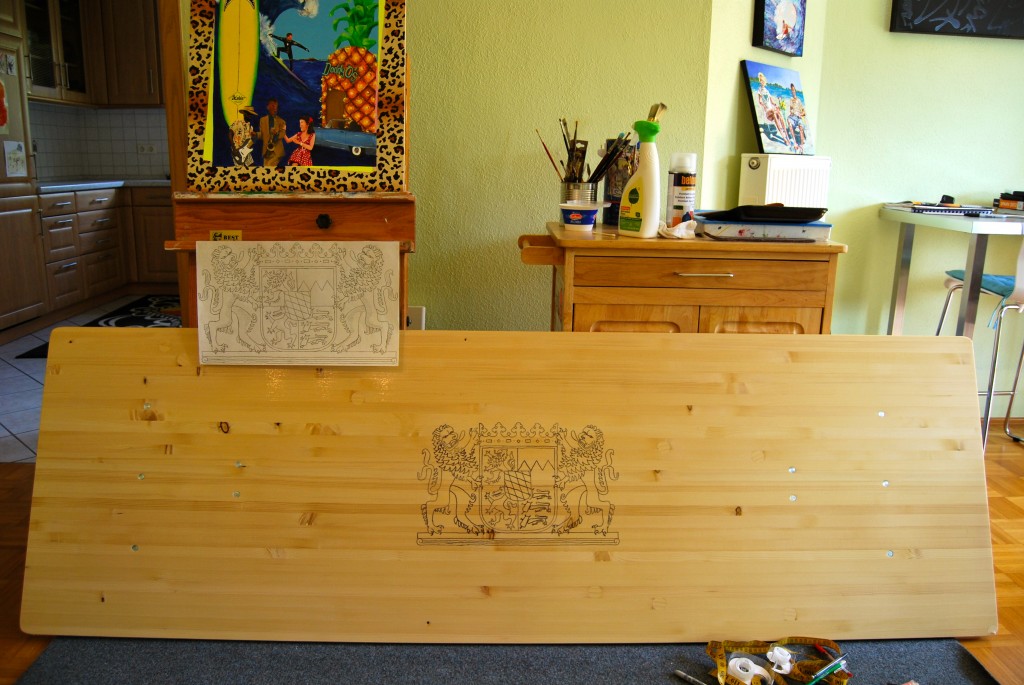 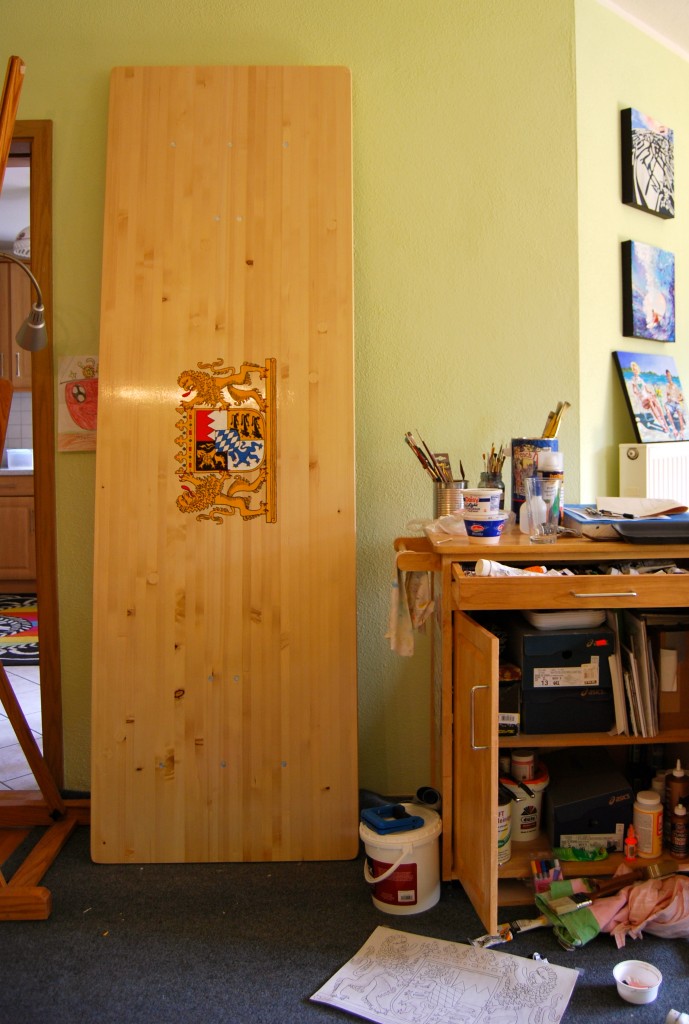 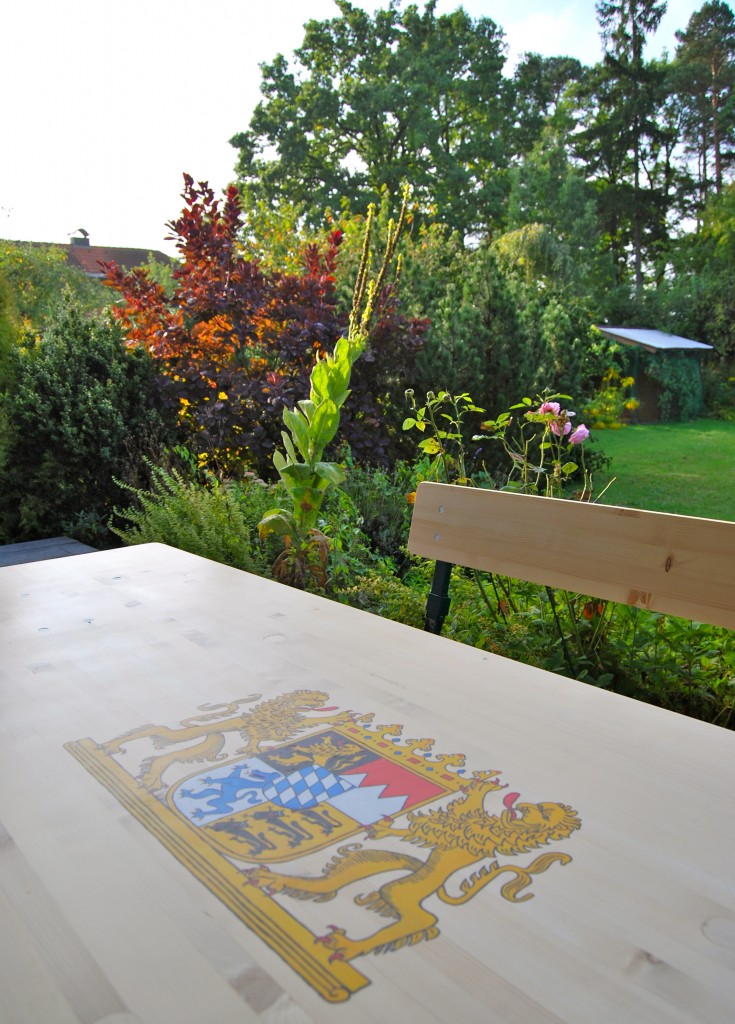 The modern Bavarian Coat of Arms was designed by Eduard Ege, following heraldic traditions, in 1946. It was introduced on the Flag in 1950. It’s imagery is symbolised as folows.

The first quarter: Since 1214 the golden lion has served as the joint symbol of the ancient Bavarian and Palatine Wittelsbach dynasties.

The second quarter: It is divided into two halves: red and white with three white peaks. This “rake” stands for the districts of Upper Franconia, Middle Franconia, and Lower Franconia.

The third quarter: The bottom left shows a blue panther against a white background. It represents the ancient Bavarian districts of Lower Bavaria and Upper Bavaria.

The fourth quarter: It depicts three black lions couchant, one above the other, facing the observer. They derive from the ancient coat of arms of the Hohenstaufen dynasty, the former Dukes of Swabia, first used in 1216. In the coat of arms these three lions represent the district of Swabia.

The Crown: The four-quartered shield with the central shield is surmounted by a crown. It consists of a bejeweled golden band decorated with five ornamental leaves. First used in the coat of arms of 1923, it is known as the people’s crown to symbolize the sovereignty of the people following the abolition of the monarchy.