Every piece that I create is one of a kind. Because of this I will often get special requests for hoodies, or scarves with very specific themes. The piece featured above is a perfect example of that. I recently created it for a friend who marvels in American Tiki. He is a man quite sensitive toward this lost culture and I had a lot of fun delving deep in its roots to make my first Tiki Man Hoodie.
My first step was to start combing thrift stores and yard sales. The goal was to find a remnant that once helped to shape urban polynesian style. Fortunately I didn’t have to go any further than my nearest thrift store. There I found the perfect shirt, straight from Hawaii itself. As you can see I took the liberty of adding the tag to the design as proof of authenticity. 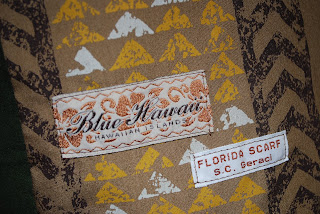 In looking for further inspiration for the hoodie’s composition I came across interesting facts about the lost culture. For instance, it used to be that every major city in America had a Polynesian Palace. In the 20’s and 30’s primitive art was adored by artists of the avantegarde. The God Tiki was their muse. Even Picasso himself owned a Marquesan Tiki. The style of modern primitivism found mass appeal to the middle class after WWII. The whimsy and bohemian personality of the sub-culture really started to catch. So where did the suburban savage go? Apparently he turned into a “Parrot-Head.” The 70’s and Jimmy Buffet are attributed with the “watering down” of Polynesian style. The Tiki Bar started to get knocked by culture critics as an embarassing fad. And by the 80’s it was over. Geez, what didn’t the 80’s kill?
So that’s what I learned about Tiki, in a nutshell. Thanks to Seth for the incentive to do this.
“Suburban Savage”…has a great ring to it. Don’t you think?

One thought on “Inspiration From Paradise Lost”