Skip to content
So the dress (I’ve talked about a couple of times before) made the news. Sarah and I are local celebrities. Barely, but it’s still fun to be interviewed. I’ll be really excited if it kicks up traffic through my art center. Here’s the article and photo: 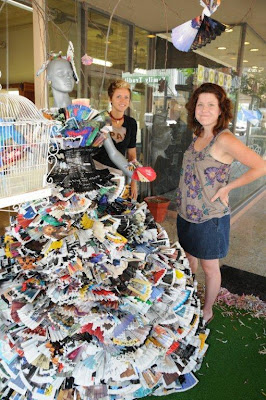 Two Fort Rucker spouses have discovered a welcoming venue for expressing their creativity, and are becoming well-known community contributors in the process.

The show at the Ann Rudd Art Center in downtown Ozark, which ended April 30, featured three-dimensional sculpture, handmade jewelry and various other art forms, allowing for endless creative possibilities. What the two came up with was an idea that ultimately won them public acclaim.

“The criteria for this particular show allowed me to explore creative inspirations I don’t normally tap into. The materials to be used had no boundaries,” said Geraci.

“I wanted to use something plentiful, thus the idea of recycling old art magazines was born. Also, the art center is a great venue with wonderful floor space. I wanted to fill up as much of it as possible. It’s fun to build sculpture and give the audience something to walk around,” she said.

Geraci and Wickline collaborated on the concept and design of their masterpiece, ultimately surprising even themselves with the result. The reward of their labors extends beyond winning first prize, according to Geraci.

“The “win” was very surprising and complimentary for us. It is so rewarding to pour into the creation of something and have it be so well received. We revel in the fact that it was such a simple idea for us both that blossomed into something quite remarkable,” she said.

Looking at Feria, one might wonder how they came up with such a unique idea.

“Sarah and I were volunteering in the gallery one day and I told her about my desire to enter the Fusion show. I told her I’d love to make a dress out of the old magazines piled around. I thought it would be cool to ‘open the pages again’ and get people to notice the art in them,” Geraci said.

Taking the DCCAH motto of “Small Town…Big Art” to heart, the pair’s creation began to take shape with the discovery of a 1950s vintage female mannequin, a remnant from the art center’s previous life as a clothing department store.

“We first built the dress around her in chicken wire. Then we folded a lot of paper and stuffed it through. The bodice was secured with each piece hand sewn to the next,” Geraci explained.

Once complete, naming the project became a challenge.

“We were trying to name the sculpture and having trouble agreeing. Finally Sarah, having lived in Europe, suggested we name her after a festival in Spain. I loved it…Feria. I could imagine our mannequin coming alive and dancing around the room to a Spanish groove, birds swirling around. We also made magazine birds to keep her company and complete the image,” Geraci said.

New Jersey native Geraci, who earned a bachelor’s degree in painting from Rutgers University, credits a lot of her knowledge to life and work.

“I have grown professionally and personally through learning from others. I always have my eyes and ears open for a lesson to be learned,” she said.

Discovering the DCCAH in Ozark was part of that process.

“When I move to a new town, I seek out the local art community as a way to become immediately involved. I saw an ad in the Army Flyer requesting submissions for the DCCAH Annual Juried Show.

“Now I participate in every show. To put it simply, I love to make things for people to look at,” Geraci said.

In August, Geraci and Wickline will soon have another opportunity to express their talents, according to DCCAH member and event chair Jeffrey Babine.

“Artists may enter a maximum of three works of art. Fees are $25 for the first entry and $5 for each additional entry,” Babine said. For further information call Babine at 334-774-7145.

“We are always looking for new members and invite the public to stop in for a visit from1:30 to 4:30 p.m. Tues. and Wed., and Sat. from 10 a.m. to 1 p.m. Community members are also welcome to our council meetings at 5:30 p.m. the fourth Tuesday of each month,” said Carol Luckfield, DCAAH president.

“We are a non-profit organization that endeavors to promote arts in the local community via exhibits, workshops and productions in various artistic fields, and to provide a venue for community functions that will expose the public to cultural experience,” she said.

“I sincerely encourage spouses to discover their own creativity. It’s satisfying to make things. Exploration of art and craft can be just as much an exploration of one’s self as it is a hobby. Igniting your own spark can bring energy, inspiration and comfort to a lifestyle that is challenging,” Geraci said.

“My husband is proud of my involvement. The Army keeps Phil pretty busy all day- and week- long. He’s glad that I have outlets for keeping myself inspired, productive and involved,” she said.