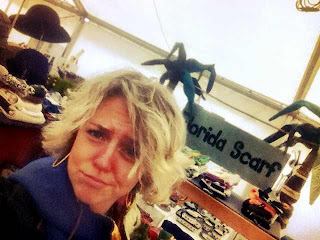 I definitely did not have the weekend I expected. At times I even felt like I was having the weekend from Hell. Almost everything that could have gone wrong did. I know that life, and owning a small business, are not always easy; but come on…..
The night before I drove to Wiesbaden for the bazaar I wouldn’t let myself sleep. This meant that I couldn’t handle the 2.5 hour drive without pulling over and taking a nap on Thursday morning. Setup began at 8:00, but I wasn’t able to get there until 10:00.
Due to check-in complications I wasn’t able to actually start setting up until 11:15. The initial space my bazaar hosts tried to give me wasn’t even wide enough to fit the tables they provided; let alone any of my other displays. I took their second option, which was a spot in the Fest tent. At the moment this seemed like a much better option. I didn’t know that it was going to be cold and rain all weekend.
I had not planned a wardrobe around being outdoors in this kind of weather for three, 10 hour days. I packed my stretch pants, skinny jeans, loafers, no socks, and v-neck shirts to be in a heated hangar.
At bazaars I have a full length mirror. It’s nicer for shoppers to see their entire self along with the scarf. Fifteen minutes into setting up, that mirror got bumped and smashed all over the ground in a billion pieces. Cleaning it up without a broom, and disposing of it properly, was quite a fete. Another vendor lent me some working gloves so I wouldn’t accidentally slice my finger off. After the mirror broke it seemed (probably only to me in my own head) that the other vendors were ganging up on me. I got hassled to move my car and rearrange my tables to better suit the needs of those around me. The other people in my tent were European vendors that all seemed to know one another. (I was like this little-tiny-all alone-crafter) They were laughing, and joking in German. I was silent, and cold, and sad, and I ripped my tablecloth!
After my annoying set-up I had to navigate around the city; finding my hotel, going to Ikea for a new mirror, going to the mall for socks, leg warmers, and gloves, and feeding myself. By the end of the night I was exhausted, but this did not stop the Universe from punishing me further. I got trapped in the parking garage. It seems I was initially printed a parking receipt without a date and time. Because of this, the machine wouldn’t let me pay, and the gate wouldn’t let me out. There was no security guard answering the telecom; and there was no guard at the security desk. It took me an hour and the help of two different sets of Germans to free me (and my automobile) from the imprisonment. When I finally got back to my hotel (which was just a house with rented rooms) there was no parking. I drove down the street and around the corner.
And that was just on Thursday.
On Friday morning when I woke up I had half-a-mind to pack up and hightail it home; skipping this whole bazaar in Wiesbaden thing. But I couldn’t give up so easily. I arrived at the bazaar grounds at 9:30. I finished setting up, mingled with my neighbors a bit, and waited for some scarf-selling action. It never happened. I didn’t sell my first scarf until 2:00 pm, and there wasn’t much activity to follow.
The bazaar ended at 7:00. In aimlessly driving around the city to find a place for dinner, I ran a yellow light. After I went through it I saw a light flash twice in the corner of my eye. I’m pretty sure that means my photo got taken for running the yellow and there will be a ticket in the mail for me any day.
I managed to survive most of Saturday without incident. This was until after dinner, when I almost didn’t have enough money to pay for my meal because I couldn’t find the cash I had put in my pocket. Nor could I find my driver’s license. I left the restaurant, after emptying my change purse, only to find it had begun to rain again. (Good thing my car was eight blocks away.) I ran all the way back in the rain, but took one turn too fast, on a grassy corner, slipped and fell. My entire right side was mud soaked. When I got back to my car there was no money and driver’s license. In the rain, I retraced my steps two more times before confirming my money and ID were officially gone.
Isn’t that wacky? It’s been a while since I’ve been handed so many (ridiculously annoying) incidences in a row. When I eventually got home, Sunday night, I wanted to throw myself a party, for surviving. Instead I just threw myself in bed. Today, I have felt like a new woman. 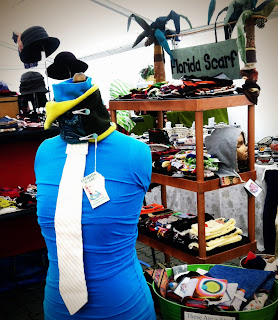