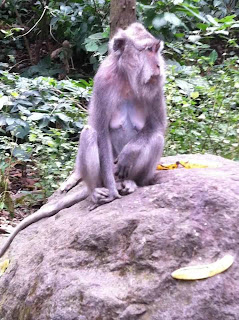 It’s only our third full day in Bali. We’ve hit the road again. This time we’re traveling from Sanur to Ubud. Our driver and her son are pretty quite so I just look out the window. It appears to me that the roadside is on a reel. It’s a movie reel that starts with an image of a food stand of watermelons and corn on the cob. It’s followed by statue stores, cement, hindu shrines, piles of junk, wood carving studios, plant nurseries, snack shops, laundry mats, and gas stands. Rewind. Repeat. Stop for traffic. Rewind. Repeat. There’s a ton of traffic as usual. There’s a million locals on mopeds. There making bold maneuvers; like texting while mopeding…with their kids poised in front of them napping on the handlebars. The curbs in Bali are painted in an alternating white and black pattern. It reminds of the part in Beetlejuice when he turns into a snake. I wonder if Tim Burton has been to Bali. I tried to ask the driver about the meaning of the black and white, but I didn’t get a real definitive answer. I think it’s a language thing….. 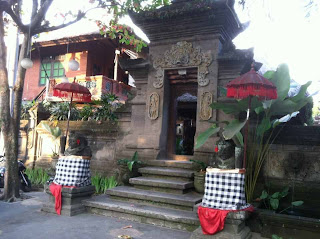 The hotel we happened to reserve in Ubud was gorgeous; and their staff was amazing. Did we luck out again, or is Bali always this delightful? By the time we arrived we were starving. We had lunch directly across the street at Warung Enak. Every restaurant’s name begins with Warung. I think it must translate to cozy little inexpensive local restaurant. In German I think it would be stübl. It’ll be no surprise to you; the food at Warung Enak was perfect. By this time I was convinced that it’s impossible to have a bad meal in Bali. Normally I’ll refference a guide book for restaurant tips, but in Bali it isn’t necessary. 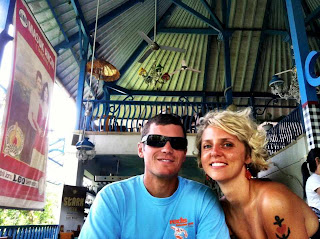 After lunch we went to the Monkey Forest. It was a skip and a jump from our hotel. It’s not a place I thought we’d visit. To me, the name and purpose of the forest just reeks of being a tourist trap. But since we didn’t have any other plans for the afternoon we figured why not? I was pleasantly surprised. We had a blast. It may be the best tourist attraction I ever visited. (That’ll teach me to make assumptions I guess.) The Monkey Forest is a mini jungle in the middle of the city that is home to over 600 monkeys. They are amazing. Walking through the forest and observing their behavior is mesmerizing and astounding. Watching the other tourists interact with them presents an equally as amazing mental trip. Many people do many stupid things. We saw a guy walking with a bag of chips; they weren’t even open. He got jacked by a monkey in about 15 seconds. The monkey ran up his leg, stole his chip bag, ran back down his leg, ripped the bag open, ate a couple of chips, and then threw the rest of the bag on the ground and moved on. His boys came behind to finish off the bag. It was almost like the first monkey was more interested in proving a point than eating the chips. Hilarious. The monkeys will steal anything. I found them to be so cute, gross, devilish, and comical; all at the same time. Being so close to these monkeys; I felt like I didn’t know what to do (or make) of myself. I’m pretty sure I laughed nervously a lot. As we strolled further into the forest, enjoying the scenery and the company, Phil pointed out that if you stop to listen you can hear nothing but laughter. Laughter sounds the same in any language; and there was a representative from just about every country on the planet in The Monkey Forest that afternoon. I think it’s one of the happiest places I’ve ever been. How can you be sad around a ton of fat, spoiled monkeys entertaining the daylights out of people? I don’t think it’s exactly what nature had intended, but it’s pretty symbiotic. 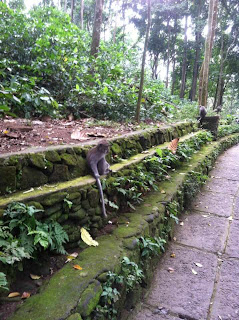 Ready for the run-down on dinner? We ate at a restaurant called Murni’s. I found it in the guide book; and just had to check it out. I guess it’s pretty famous. It’s been around forever. I’ll also add, it took us forever to figure out where it was….not close to our hotel. Needless to say, we walked there and taxi’d back. This was another meal we ate cliffside; but mountain cliffside not beach cliffside. We were on a porch about three stories up. We were looking out over moonlit treetops. Phil had ribs; he loved the ribs in Bali. I had chicken stew; another traditional dish. That evening I also ordered a glass of the local wine, Hatten. It’s something I never did again. When it comes to wine I don’t think I could recommend the Indonesian; certainly not over the French, Italian, German, Chilean….etc. In Bali you are better off sticking to beer and tropical drinks. In fact, that evening Phil tried to order a dirty martini. It’s a toss-up as to whose drink was worse. Unlike the drinks at Murni’s, the dessert at Murni’s was amazing; and the waitress was an expert at upselling. By the time she was done with us we had a large bowl half full of black rice pudding and half full of tapioca with a scoop of vanilla ice cream on top and whip cream. It was marvelous. I could have swam in it.