It was another art-historic, lessons of life and culture, weekend for me. This time I kept it a bit closer to home. 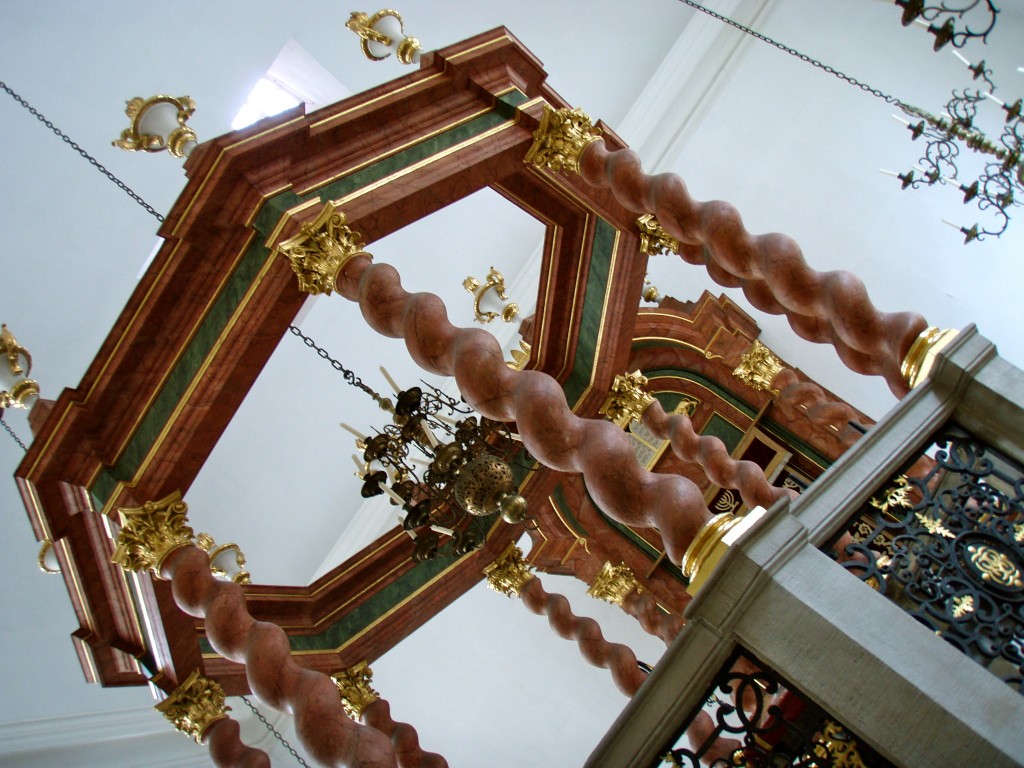 Friday night I attended an art opening at the R3 Gallery downtown. Catharina, my upstairs neighbor, came with me and we had fun. A girl’s night, if you will; Ludwig was hunting. I don’t think Catharina normally spends her evenings dissecting art and contracting meaning from colorful compositoins, but with a glass of champagne she thinks anything is fun. The artist of the exhibition was Ines Sheppach…and she draws. Her drawing are quite whimsical, and have a bit of a dark side. When she spoke of her work I found it amusing. Not that I understood everything, but I did pick up on the fact that all she cares about are the layers of pencil that she carefully lays on top of one another. She is more concerned with her application than with the meaning of her composition. For me that was a bit counterintuitive, considering her subject matter would be images like masked nude women timelessly floating around radishes, marble statues of Greek gods, and flames. (You’re probably thinking, “What?”, and I’m saying, “Exactly.” You can’t draw things like that and say that it has no meaning.) At any rate, they were entertaining to look at. After the exhibit we strolled through town and stopped at a cafe for ice cream at 9:00 pm at night with the sun still relatively high in the sky.

Saturday I needed to practice a bit of real-time German (with someone other than Catharina) so I went to the mall. Because I am a knuckle-head; I dropped my camera on the ground a few weeks ago. (I didn’t just drop it. It flew out of my bag, into the air, and smashed on the ground.) The camera survived, but the lens broke. My first stop at the mall was the camera shop; to see if I could successfully have a conversation about what to do about my lens. I will not try to pretend that I understood, even half, of what the clerk said to me; but I did gather that it would cost as much to fix it as it would to replace it. Mission accomplished. For my next trick I decided I needed some new make-up. Nothing huge, just some nice mascara and a new lip gloss that doesn’t smell like plastic. So I went to the store and engaged a clerk to help me pick stuff out. That didn’t go so hot. I couldn’t understand much. I did manage to buy what I needed. There was an art exhibit at the mall, so I got a bit of culture in too. The exhibit was a bunch of cartoon prints that were a cooperative between the German-French Friendship Club. They were celebrating their 50th anniversary. (I think if this is the case then someone should tell the German and the French that they are supposed to like one another.) 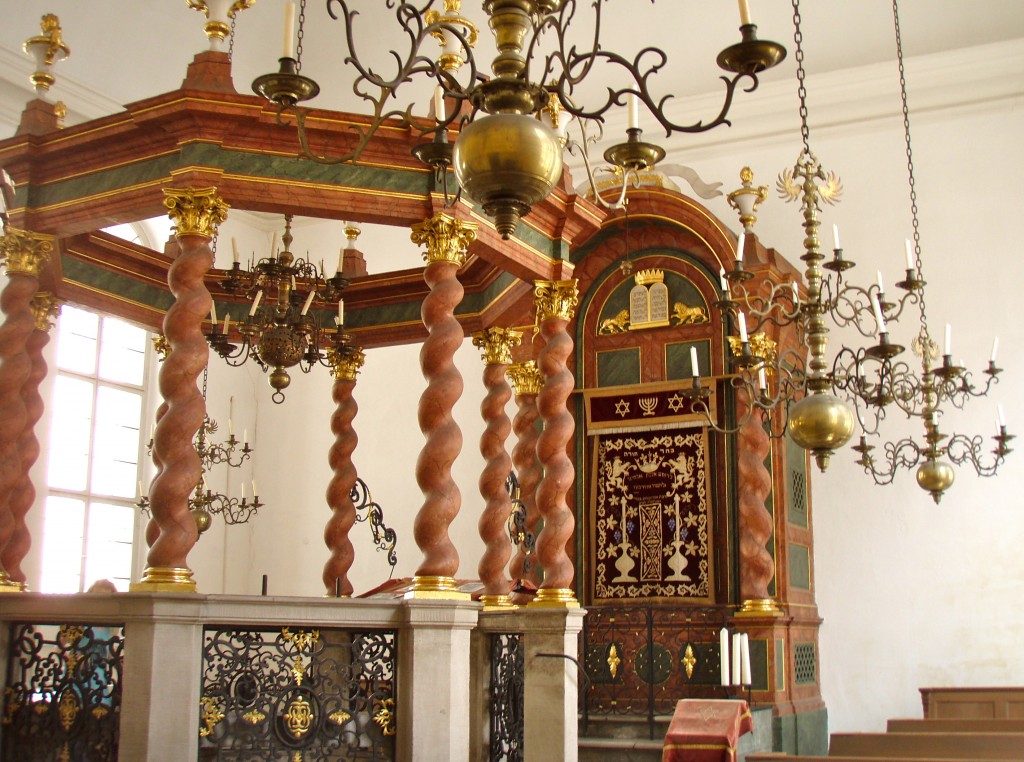 Today I visited the Jewish Synagogue in Ansbach. It was built in 1744 and survived WWII. There is a simple story about it’s creation and its survival. In its simplicity I found it quite charming. Due to a small Jewish population here in Ansbach, the Synagogue does not host services. It’s only open for two hours on the 2nd and 4rth Sunday of the month. The stars aligned today, so I paid it a visit. It’s quite non-descript on the outside, with all it’s glory on the inside. 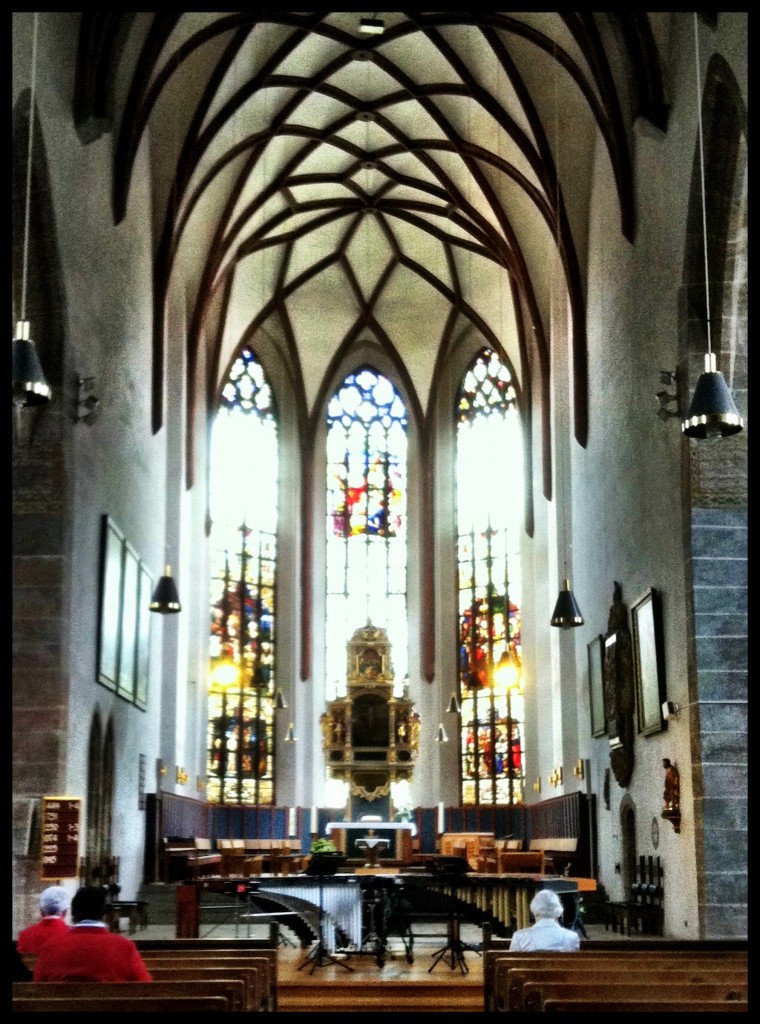 I also went to a concert later this evening. Probably not the kind of concert your thinking of; it was a marimba quartet playing classical songs in a church. The church, St Johannis, was another house of worship that I had yet to step inside, here in my town. When I first arrived I was super-early; which was just as well, so were all the elderly folks attending the concert. I was right at home. Eventually the church filled in and the concert began. When the band played, the musicians didn’t just hit the keys with their sticks. It was a whole body movement. They would sway in and out of each note. It’s a dance in itself. Players don’t sit down at the marimba; they’re engaged, thinking and dancing at the same time. It’s a connectedness between the musician and his instrument, but also the band members together. I wonder if they even hear their songs and how sweet they are; because maybe they are too intent on creating the song. I find it most remarkable when each musician has two drumsticks (if that’s what you call them) in each hand. Multiply that by four members and you’ve got 16 sticks tapping 16 keys. It’s a lively and complex sound. The music was quite happy. I think that’s how I could best describe marimba music; happy. The church was a great setting for the concert. Aside from the obvious, killer acoustics in a church; it also provided an austere, and intimate spot in time to enjoy the sounds. It’s far different than other concerts I’ve been to where there is a marimba; let’s say a world music festival, outside on a lawn of a park, with a bunch of shoe-less, free-thinkers dancing around. The church organist played during the quartet’s intermissions. It was an interesting juxtapose of sound. (to say the least) And here; I must admit that I find the sound of the organ a bit creepy. Maybe it’s because I’ve seen too many episodes of Dark Shadows thanks to my mother. Another lovely anecdote to the concert was at 7:00 pm when the church bells, from the opposing church St. Gumbertis, sounded for the hour. The quartet, and the audience alike, chuckled and waited for the bells to commence before diving into a new song. The marimba band played music as old as that from the 17th century, some Bach and some Saint-Saëns, and they also played melodies as new as the late 1960’s. Again, I must admit, I did not love the songs from the 60’s. They sounded a bit like tunes from the Beverly Hills Cop soundtrack. My favorite songs were those of Camille Saint-Saëns, Einzugsmarsch der Löwen ()and Die Fossilien (), but this is only because I like tunes that are up-beat and energetic. the band put on a wonderful show and it was amazing to witness the complexities of this style of music from the second-row pew.

And there you have it. That’s the wrap up of my weekend of culture in Ansbach.

Art? Craft? I did that too. You can see the latest creations tomorrow on the Creative page of the blog.