Getting back to my (so-called) normal life, after my unexpected trip to New Jersey, has felt like a circus. Maybe my life is, just simply, a circus…all the time. I must make it that way. It’s busy, it’s fun, it’s demanding, it’s colorful, and it’s kooky. I love it. There has been an additional bonus to my normal life recently…Phil’s back in it!! He’s been gone a bunch lately and it’s nice to be back together again.

The entry you are about to read is one I actually wrote last week. I never got a chance to post it, so here it is…

Phil and I have missed each other, so naturally we had some catching up to do. But in between not brushing my teeth alone anymore, folding more laundry, packing lunches, planning a joint-weekly-schedule, and enjoying sunsets in good company; I have still been keeping my promise to myself to continue to explore and enjoy the German lifestyle. Here are the highlights.

Last Wednesday I attended the annual meeting of the Brucke ’92 artists’ club; to which I am the newest member. I can’t say the meeting was necessarily fun, but it was an exercise in my language skills. At the start of the meeting I was understanding much more than I was by the end, but I did end up with some pretty interesting doodles on my paper. I also can’t say that my fellow club members are in my general age bracket, but I seem to gravitate towards gray hair. The better news is that I found out our group show is in November and I will be able to submit some work to display. Yay! The gallery also has some classes coming up, as well as volunteer opportunities. Even though I stuck out like a sore thumb and only understood less than half of what was said all night; I’m convinced I opened a few doors for myself and I look forward to increased participation in this artist community. 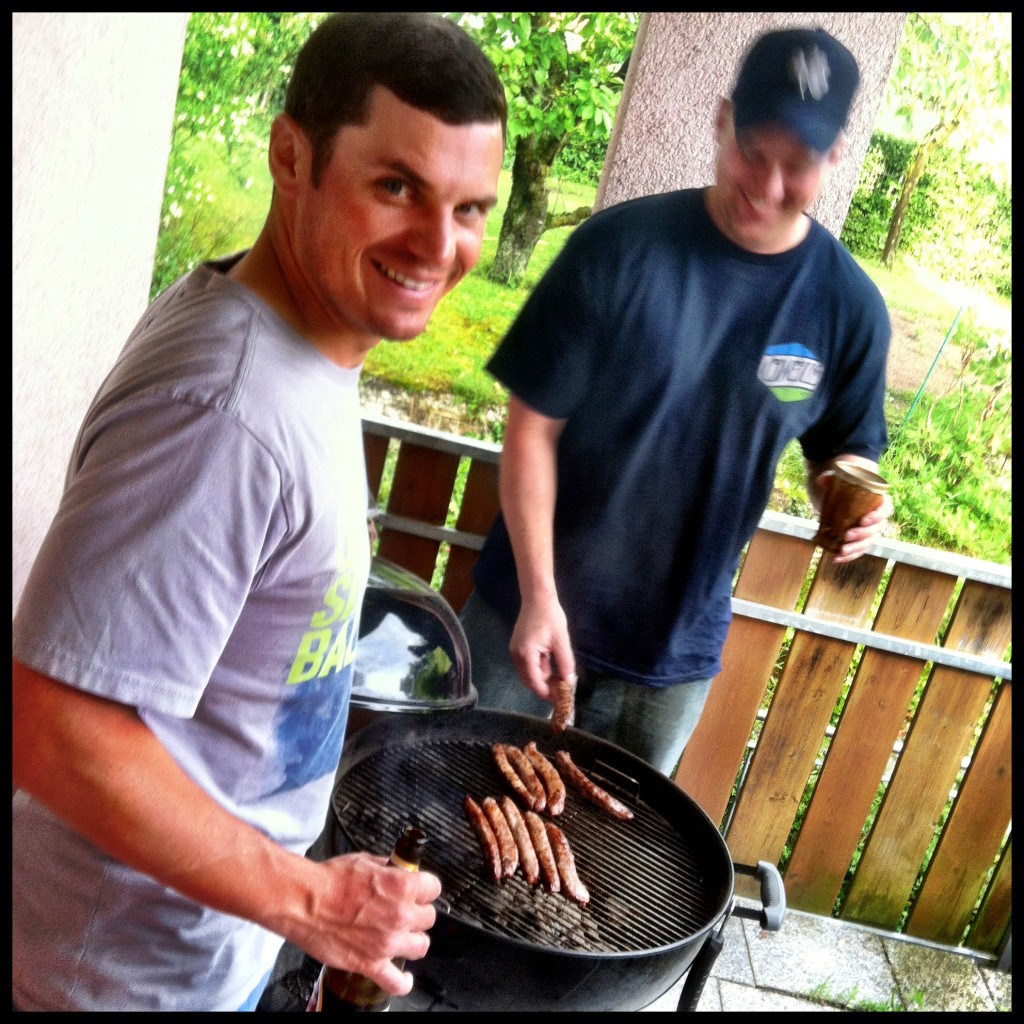 Saturday night we grilled with some friends. It was Phil’s buddy, Jacob, who brought the sausage. He made the sausage himself, with his neighbor. I think my neighbors are the bomb, but they don’t have a mini meat processing plant in their garage. In short; Jacob’s neighbor buys the pig whole and does all the butchering himself. Jacob hung out for the entire event. He said it was one of the longest work days of his life. I think it was worth all of his effort. Not only were the grilled sausages delicious, but it’s also impressive to hear the story of the process of their creation. They were as fresh, local, and natural as a sausage can get. 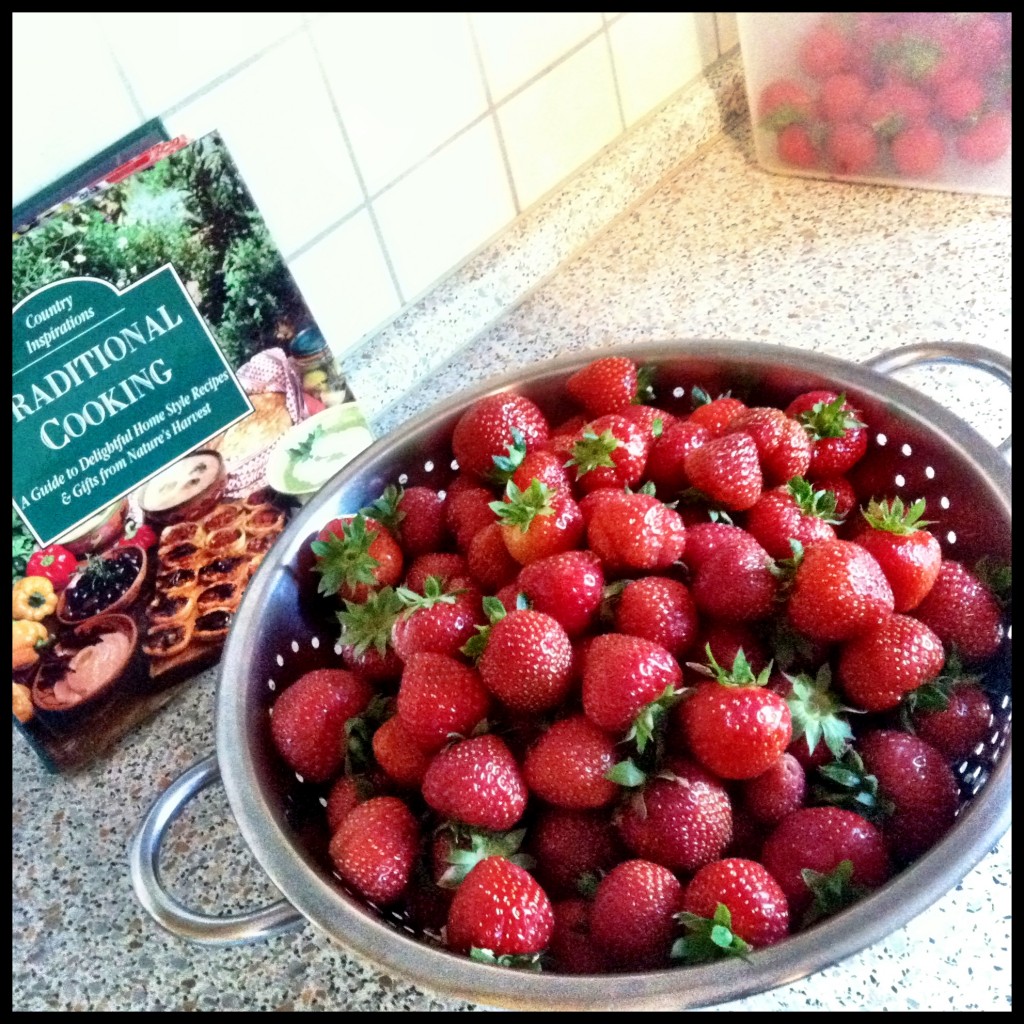 On Sunday morning we woke up to a sky without a rain cloud in sight. This was a great relief, as it had been raining everyday since I returned from the U.S. Just I was beginning to shrivel the weather turned around. After coffee, and some light weekend chores, Phil and I went strawberry picking. If you’re focused, and your timing is right, you can pick a massive amount of fresh, delicious, ripe berries in no time. Peak-season strawberries are terribly addictive. We’ve been eating them constantly since they’ve moved in to our kitchen. Luckily, I didn’t allow most of the berries to sit idle for too long. A third of them got packed into a bottle with gin, and are on their way to becoming delicious cocktails in three months. Another third went into the freezer, for smoothies (and such) throughout the summer. And the last bit went into strawberry-ginger jam. De-Lish.

After strawberry picking Phil and I did the Sunday-Lunch-With-Catharina-And-Ludwig-Thing I love to so much on Sunday afternoons. This was Phil’s first trip with us. It was a total delight. We ate at an adorable little restaurant called Die Eule. It means The Owl in English. The restaurant was a quaint, rainbow-colored, wooden house set in a patch of forest. It had a beer garden in front and a flea market in the rear. When we walked in Phil proclaimed that the place looked like Easter. He asked if all the restaurants we eat at looked like this one. No was my reply, and it was the truth. I have never been to a restaurant here yet with more tchotchky on the walls, on the tables, and in the yard outfront. I found it delightful. It was like a house that would belong to a crazy old lady that loves tea, collectibles, and cats. The food was nice too. They had a salad buffet, which is a bit out of character for restaurants here, and the menu offered German dishes as well as some International delights too. I was surprised. Normally Ludwig takes us to places that only offer traditional fare. He is afraid I don’t have enough German tradition in my American diet. Phil ordered the pork shoulder and a beer. Ludwig did too. Catharina got sauerbraten and a beer. And me? I couldn’t resist. I had to go for the crispy chicken in the banana chili sauce served with Thai rice. Ludwig took liberty to make fun of my meal choice more than once. If it had been anyone else I may have been annoyed. As long as Ludwig keeps showing me wonderful treasures, telling (and retelling) me amazing stories from his youth, and teaching me everything I need to know about Germany; he can poke fun at me all he wants. I can take it.

Yesterday there was an initial meeting for a German-American Friends Club. I went with Catharina, but I had to leave early to pick Phil up from work. Apparently the club is an Army initiative that is supported by the city of Ansbach. They are going to start meeting on a regular basis. I am going to try to support this club, and its endeavors, to my greatest ability. I hope it is yet another way for me to meet more members of the Ansbach community, and surrounding towns, and discover more that living here has to offer. If you live here I suggest you keep your eyes and ears out for the next meeting too. I believe the official name for the club is Outreach Kontakt Ansbach. 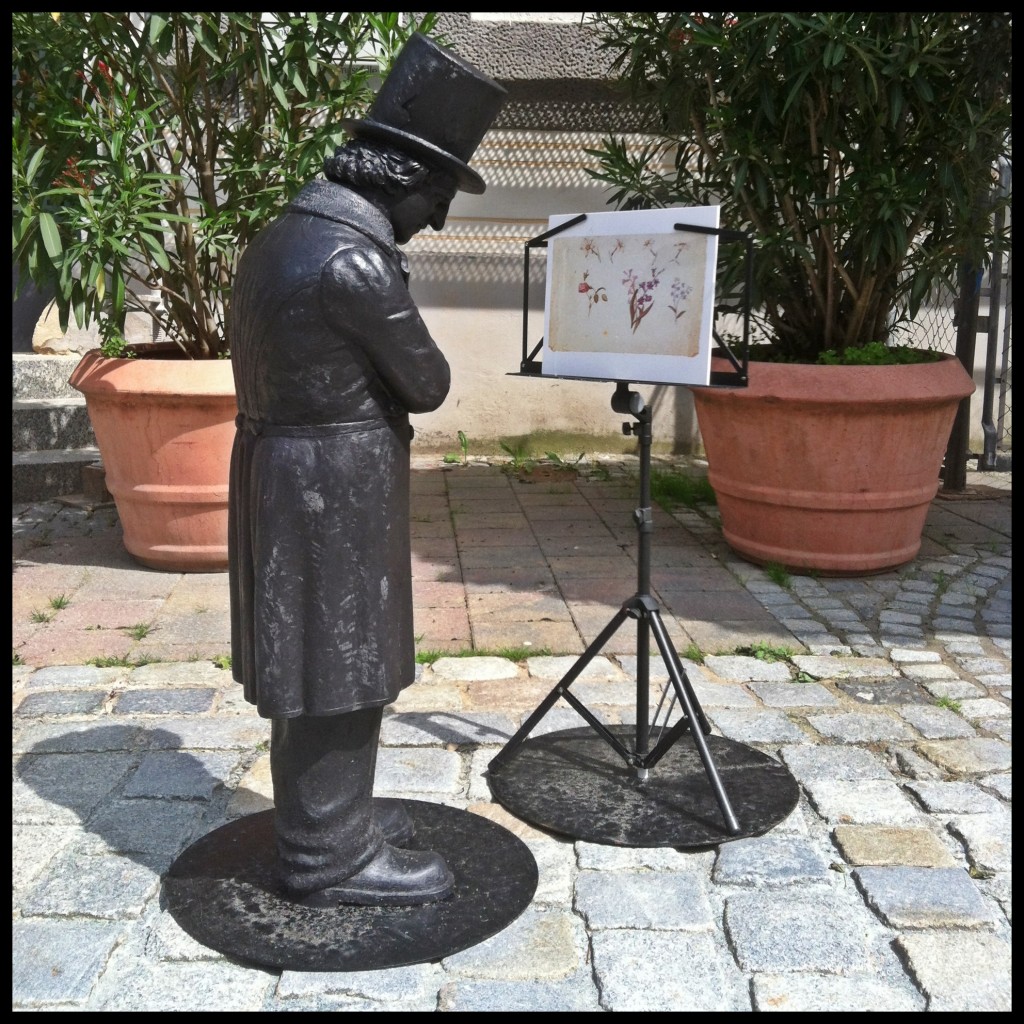 And the statues. There is a new art exhibit all around town by artist Ottmar Hörl. They are 3 feet high molds of Kaspar Hauser. There must be over 50 of them, all painted black and positioned at various locations around our city. The artist is well known for similar sculptures. He takes famous images and turns them into mini plastic monochrome sculptures. You can purchase some of his statues in a gallery downtown too. My personal favorite is a gold painted gnome sticking up his middle finger. I’m going to convince Phil that we may need to buy one.