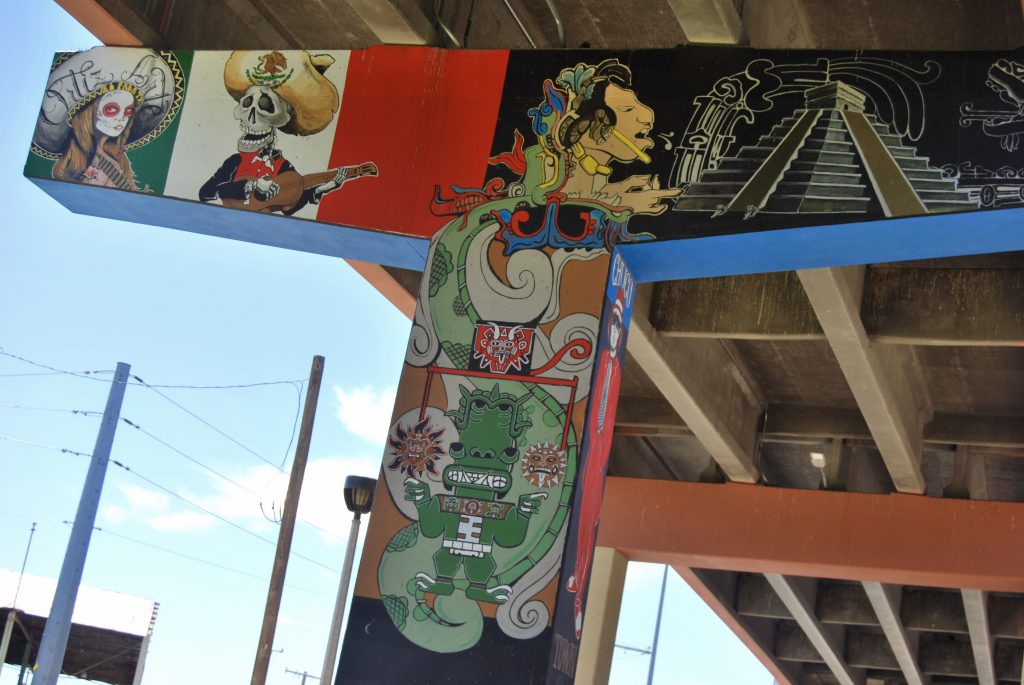 It was a warm sunny day in April. We were still living in El Paso. The babes were just over eight months old. Which means they were getting around, and getting into, everything. This particular day in April they were especially curious and pesky. I decided that we needed a change of scenery. We were birds in a cage with hunger for inspiration and revelation only art and the outdoors could satisfy. I strapped them in the car and drove us to Lincoln Park. 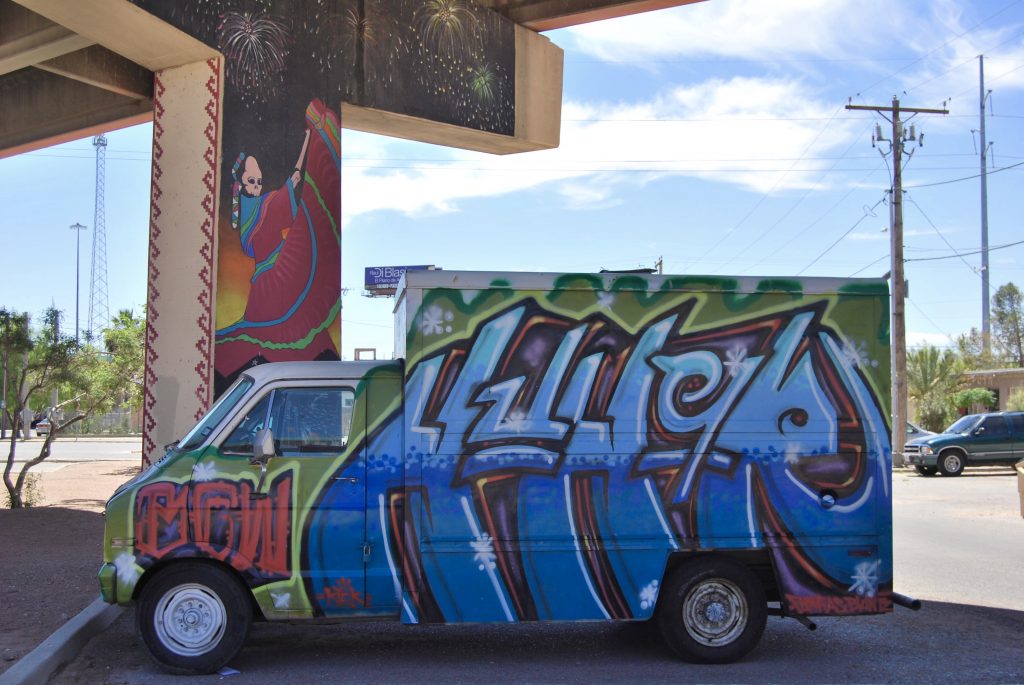 Lincoln Park is an urban park located under the intersection of Interstate 10 and Highway 54. It is practically a secret spot; a vibrant gem nestled beneath concrete overgrowth in a forgotten neighborhood. It’s quiet, save for the sounds of traffic overhead and barking dogs behind chain link fences at your side. You’ve got to watch your step in Lincoln Park. Ways around the oasis are broken sidewalks and dirt paths trodden through grass. If you time your visit correctly the basketball court will be available and the picnic tables will be empty. High noon is great for shade. 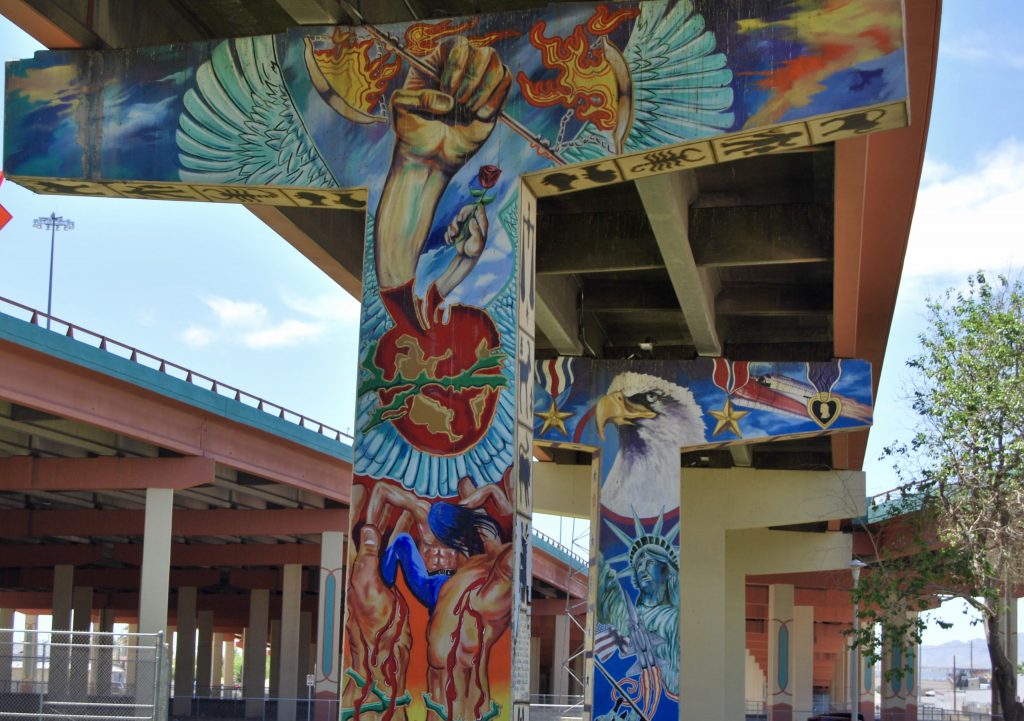 The girls and I spent twenty or thirty minutes staring at all of the ethnic murals adorning each pilaster of the thoroughfare. They remained seated in their stroller, content, as I admired and photographed the beautiful and durable creations. 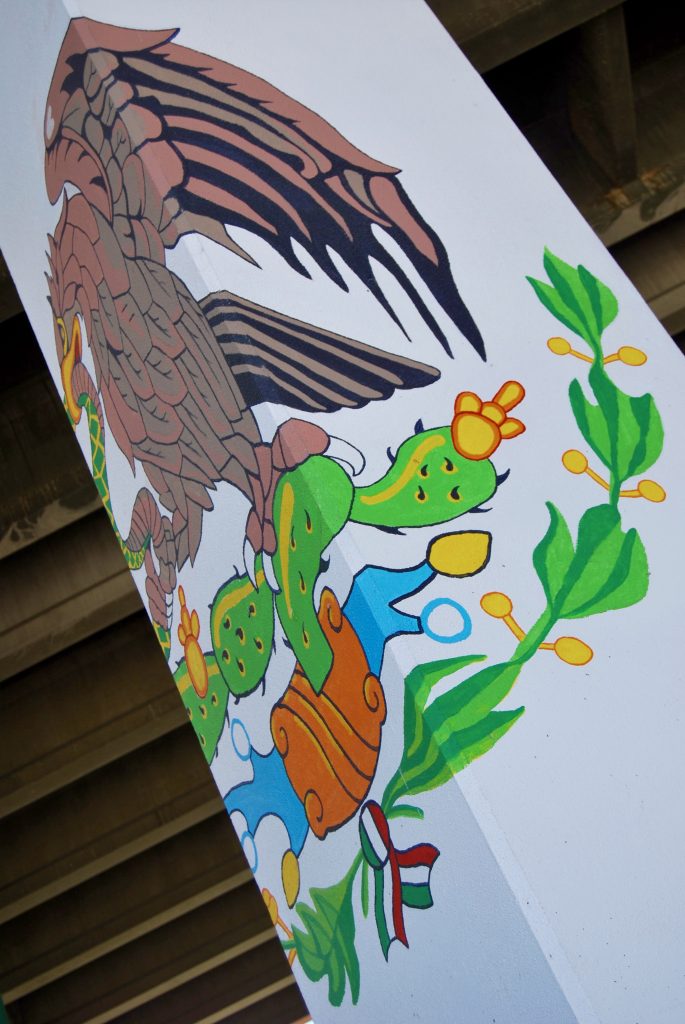 The neighborhood that is home to the park is the site of the first Mexican community north of the Río Grande. It was a flourishing community made of mostly adobe buildings from as early as the late 1800’s. In 1868 (until 1876) the area operated as a military base and was known as Camp Concordia. It was 1973 that the park was first created, designed by Nestor Valencia. In 1983, Bobby Aduato, the Lincoln Center director, asked Chicano artist Felipe Adame to paint murals on the pillars under the freeway interchange at the Lincoln Center building. (located at the edge of the park) Adame’s idea was to create a mural park similar to Chicano Park in San Diego. Adame had hoped to paint additional murals on freeway columns but due to a lack of funding he could not paint more. In 1999, Chicano Artist Carlos Callejo proposed and completed such a mural project for Lincoln Park. He worked with 5 other artists and 80 students from around the city. The artists included Cesar Inostroza, Fabian Arraiza, Steve Salazar. Inostroza and Callejo continued painting murals after funding for the project ended. Callejo said each row of columns were dedicated to various themes. One row was titled Memorial Walk and was dedicated to historical figures such as Cesar Chavez, Ruben Salazar, and Martin Luther King Jr. Another row was dedicated to the Natural Elements: Mother Earth, Father, and Son. 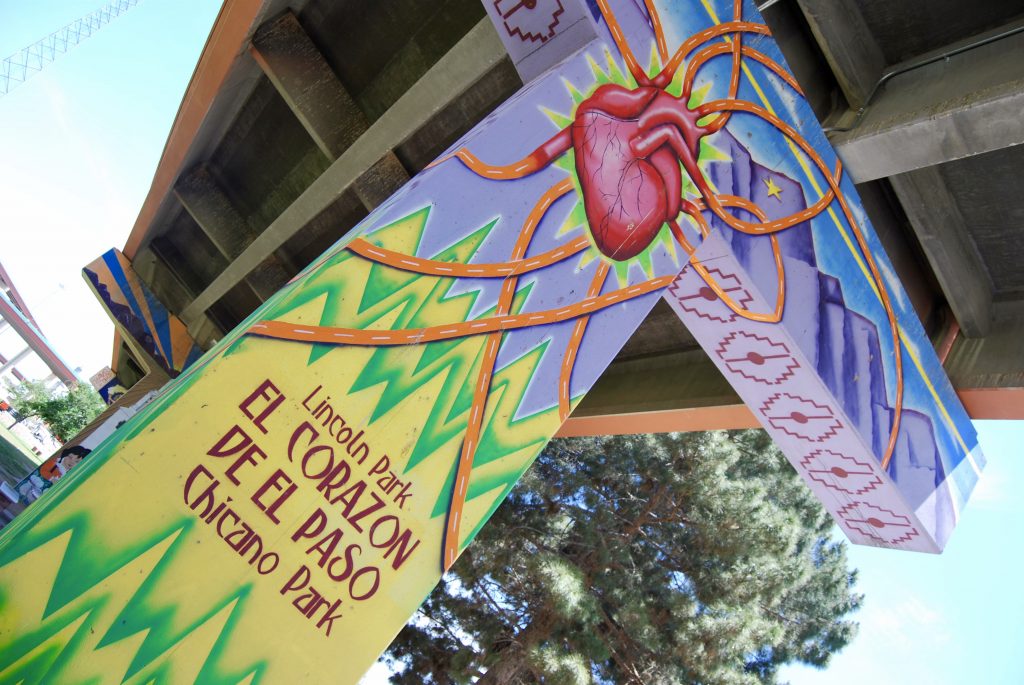 A great example of the love and pride that energized this project is the “El Corazón de El Paso” mural, painted in 2009. It’s a 30’x20’ T-shaped freeway column by Gabriel S. Gaytán. The idea for the mural came from David González a member of the Latin Pride Car Club, who sponsored the mural project and commissioned it. González gave a sketch to Gaytán. Gaytán added images of the Franklin Mountains, the star on the mountain, and Mexican pyramids. The pyramids symboliz El Paso’s strong Mexican-American heritage and population. The main image of the mural was that of a human heart with highways as arteries. This was to honor the physical location. 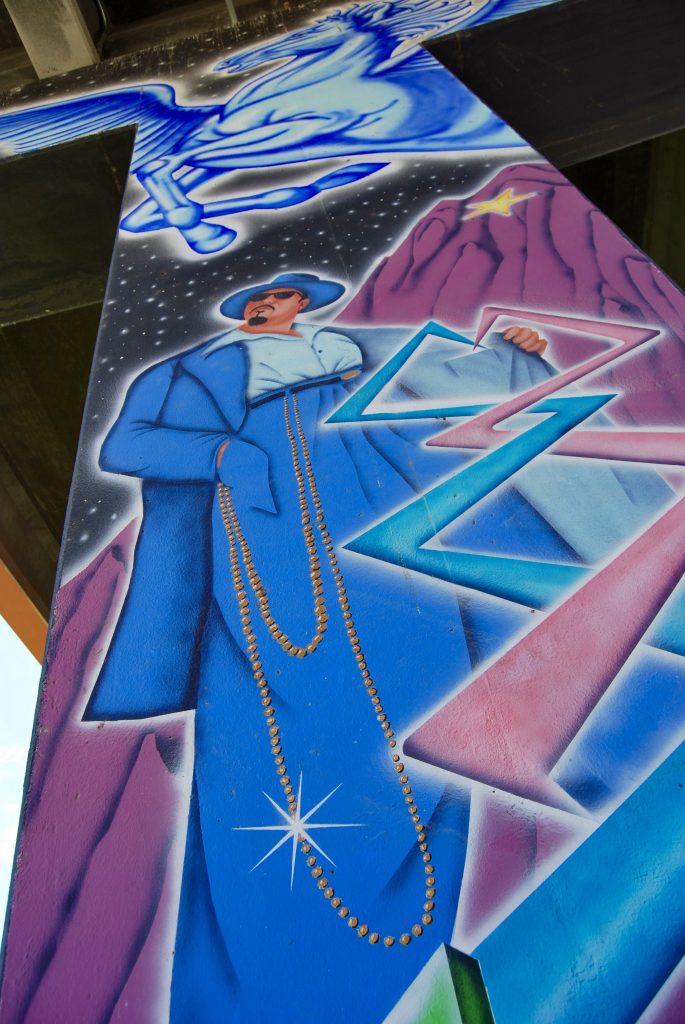 The art that can be viewed in this park, at any time of day or night, is a gift. It is a constant reminder of the culture on the block. We are here now, but we came from somewhere else. We learned to live and we grew together. It’s struggles and triumphs. The work is iconic and colorful. The images are commanding. During my visit I was moved by the quiet strength I felt the area possess.

Another diamond in the rough…In the heart of El Paso.

More information about Lincoln Park can be found here and here.