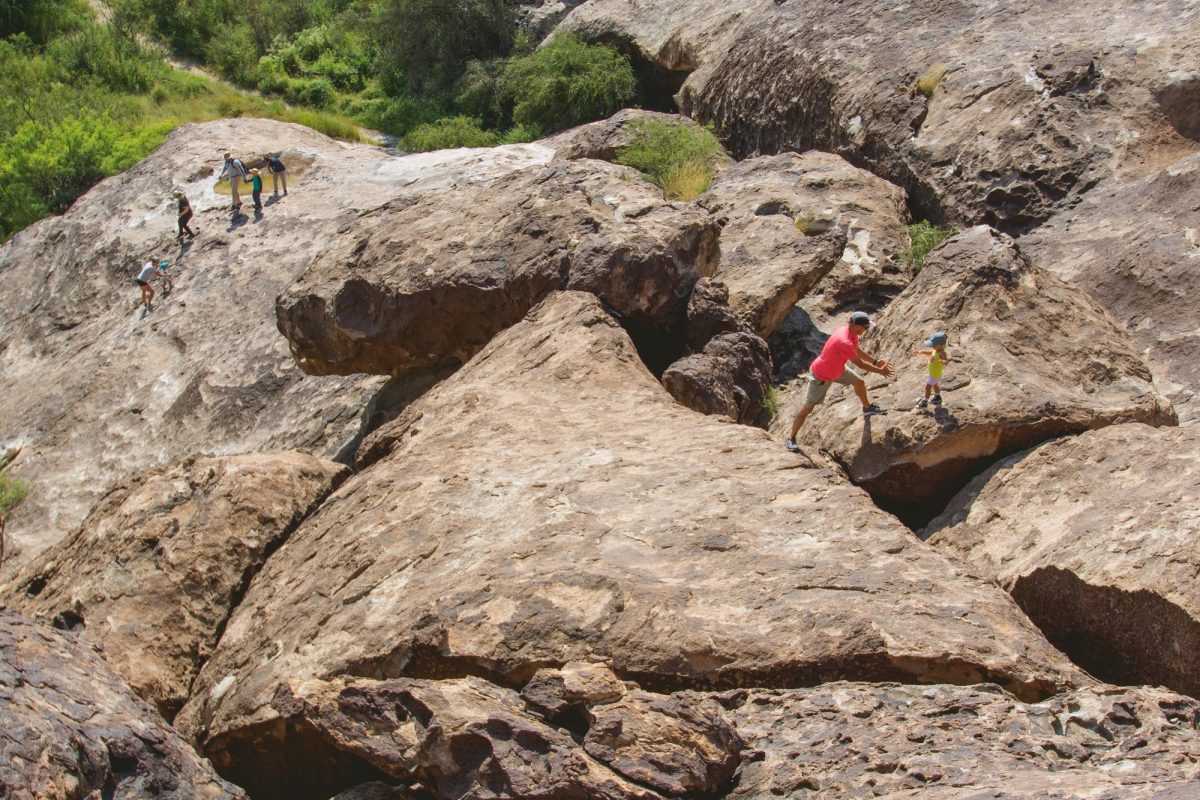 As a parent I willingly engage in loads of self-torment; mostly in the form of teaching my neanderthals kids how to behave like humans. I have convinced myself that teaching two-year olds how to follow directions, enjoy the outdoors, have self-control, and compromise, are all noble causes. I tell myself that anything I repeatedly endure now will set up good practices for the future. I’m sure I’m right, and my children will develop into perfect youngsters with the capacity to do all the things as a child that I never would have had the attention span for.

Haha! Joke’s on me, right? It’s as if I’m head scientist in a gross, social experiment on myself. Let’s see how much pressure my nerves can handle before I give up. Let’s see how long I will continue to believe that my kids won’t conquer me.

In defense (of me mocking myself) this mindset has paid off in a few areas of life. For instance, I can take my kids grocery shopping. As a matter of fact, I can take them on all matters of errand running. They walk with me and don’t go berserk while waiting in a line. As you know, they sit for story time at the library each week. I’ve even managed to get them into a rhythm at toddler gymnastics; sitting still for instruction, following a circuit, waiting their turn, and allowing a coach to assist them. (None of which is a small feat) So it’s no surprise that Phil and I decided to take Nina and Lila to Hueco Tanks this past holiday weekend for an informative, 2-3 hour, midday, guided, group hike in the late summer sun. (Putting it in print like this makes it seem all the more ridiculous to me.) 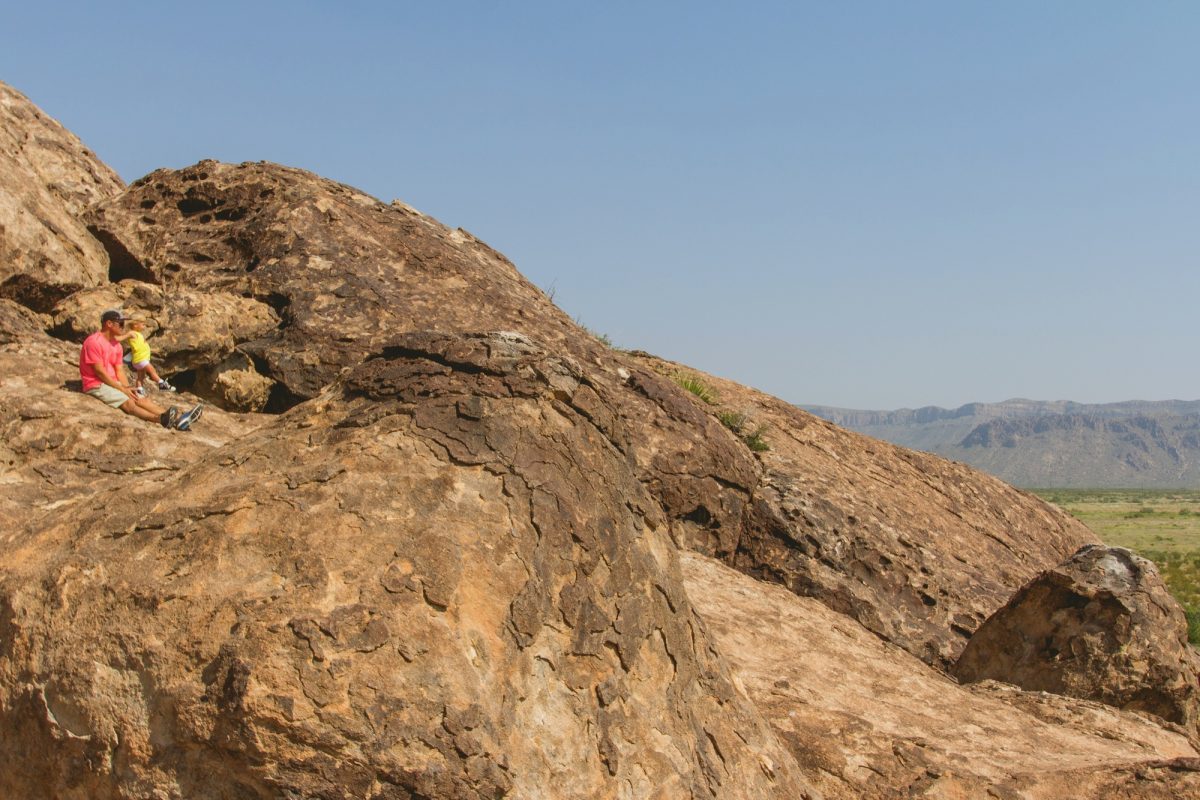 Hueco Tanks is an El Paso area, Texas State Park described as a collection of rock hills. It is certainly more than that. It is a natural and historical marvel! (A must-see while one is in the area) The 860-acre park consists of three small mountains in the middle of the desert. It is a spot where 35 million years ago magma pushed up through the Earth’s surface and cooled under a layer of limestone. Over time, weather eroded the limestone and shaped the rock into the most unique pilings with caves, cliffs, and hueco (hollow) basins that hold water. It’s great for hiking, climbing, and (because it is an oasis) identifying plants and animals. While we were there we spotted a rattlesnake, a Texas Horn Lizard, and a few, very cool, beetles. One of our guides also pointed out the trees and bushes and described their medicinal properties. 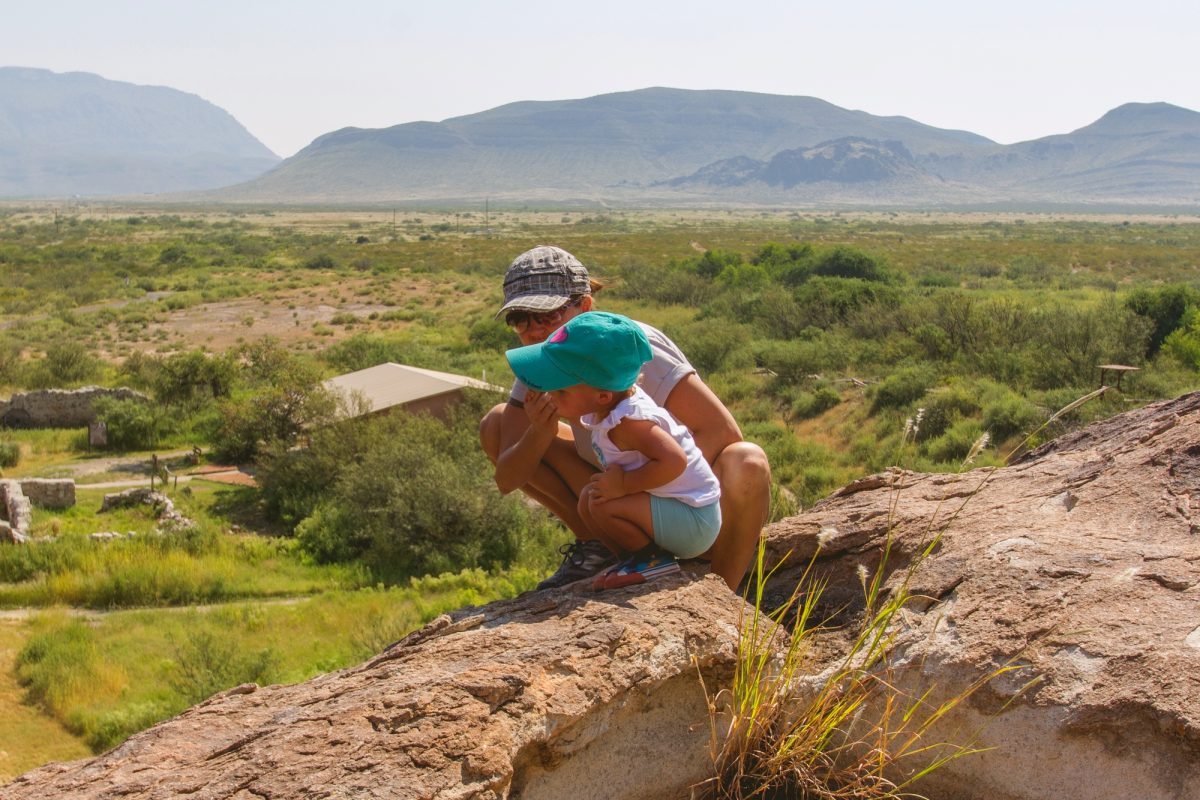 For the past 10,000 years, the area has provided water, food and shelter to travelers of the Chihuahuan Desert, early hunter-gatherers as well as agricultural peoples. Most notably, the Jornada Mogollon were the inhabitants between 200-1450 A.D. These travelers left the rocks adorned with pictographs and petroglyphs. It is quite an impressive thing to have ancient art staring you in the face, in the middle of the open desert, no museum, no ropes; just a few loose rules that you follow out of respect for what you are experiencing. Appreciating the park’s art isn’t the simplest task of course, as nothing is well marked and there is much graffiti and vandalism among the archeology. For this reason I recommend the guided tour. (Although watching a brief video will get you unguided access and a permit to explore on your own) Our guide showed us the meatiest morsels, of pictographs and petroglyphs, as he described meanings of the symbols and tales of the ancient inhabitants. (Our guides also showed us an app for identifying such things should you go on your own. The app is called DStretch, and I am under the impression it can be used around the world.) 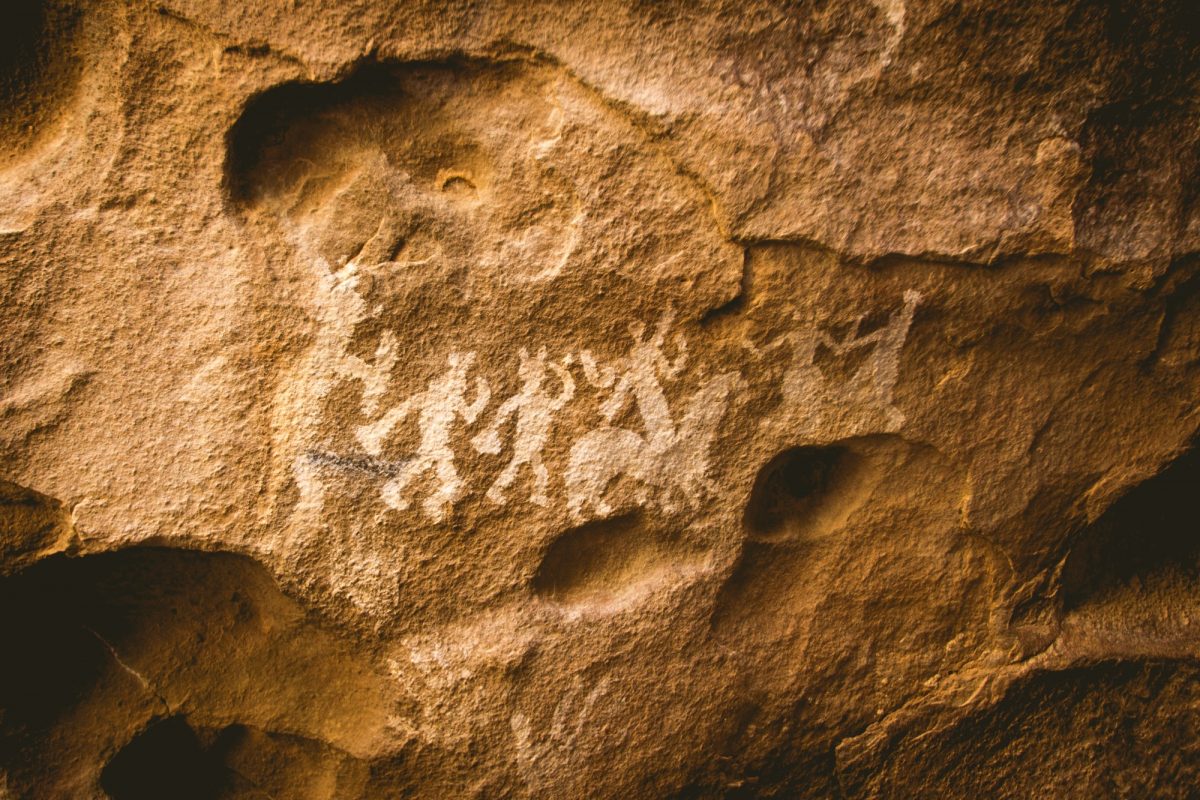 Based on my brief description of what Hueco Tanks has to offer I’m sure you can understand why Phil and I wanted to visit. I’m also confident you can understand, based on my description, that it might not have been the most ideal place for twin toddlers to spend the day. All things considered, Lila and Nina did great, and we all had a fun day; but it certainly got hot, the walking/climbing got a little sketchy, the guides offered copious amounts of information that the children weren’t interested in, and the kids got bored and tired of being trapped (most of the time) in back-packs.

I’m confident that the experience stretched the girls’ attention span (Even if only the teensiest bit) and got them more accustom to enjoying nature. (No matter the conditions) I, of course, tried to enjoy the hike and pay attention to the guides but was a bit blocked by my own agenda. I was more focused on my kids not tripping and falling on a prickly pear cactus than listening to Tish describe how to cook it and eat it. Also, things can escalate quickly when it is easier to lead your toddler up a steep mountain than down.

But when I did have one ear turned toward our guides they gave me much to ponder on my car ride home; if nowhere else. It is interesting to muse over how our use of the land has changed over the course of thousands of years. What people once sought for livelihood is now used for leisure. And in these leisurely explorations is it more important to preserve the history and study the nature, or get exercise, climb, and pretend to conquer? It also occurred to me during Dar’s lecture, that what white man viewed as a taming of the wild land the native man viewed as living in harmony with nature. And as I delve deeper into thought, how does having a religion versus being spiritual effect one’s outlook and shape behaviors? Why is there such a desire for possession? What are the differences between pictography and graffiti? I am of the opinion that there is none. People still want to leave their mark on the rocks. I do not deny the tragedy however, that comes into play when piling new on the old and wiping out the history. 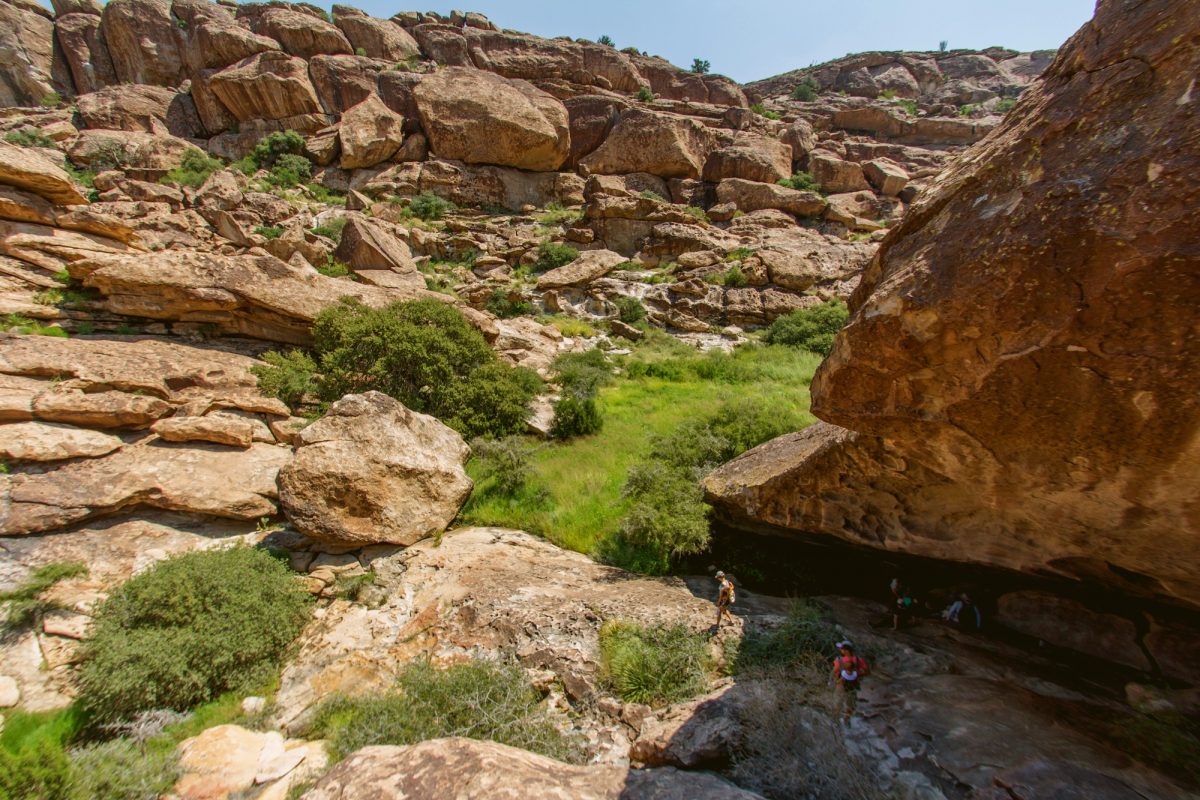 I’m sure I was not the first day trekker at Hueco Tanks plagued by such difficult to answer questions, nor will I be the last. I’m just a merry rambler, trying to teach my kids to ramble before it’s too late.

One thought on “Archaeological Exposure”