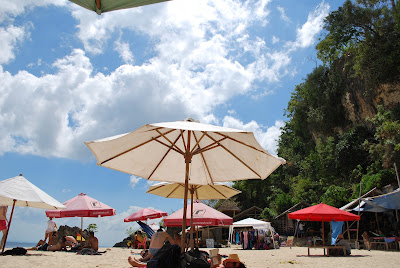 So after two days of sitting around with a busted belly and a busted foot I decided that I’d had enough. I was no longer going to sit on the beach watching other people surf and play in the water. I was done worrying that I was going to have to go to the bathroom, and worrying that I was going to get dirt and germs in my cut on my foot. I went to the pharmacy and bought waterproof band aids. One of the instructors told me my foot would have heeled in 48 hours if I had put placenta on it. Great advice, I thought. Where in the heck would I know where to go for placenta? Would I want to try to heal my cut with someone else’s placenta? I’m thinking no. I was already on enough antibiotics. This instructor was actually the one who drove me to the pharmacy to get band aids. We rode on his moped, without helmets, in the dark, after a few Bintang beers. As we left I was trying to play it cool but at the time I was thinking, “This can’t be legal, but it is Bali. If I can survive this seriously risky drive I should be able to survive a cut in the ocean.”
At the surf camp it is normal that one would go through different instructors as the week went by. You pick different waves to surf, and you get different instructors. For Phil and I this was not the case. We kept ending up with the same instructor. For both of us it was fine. We liked having the same person everyday. It made progression easier. The funny part of it was that, personality-wise, our instructors could have been our alter egos. My instructor was the one driving a moped without a helmet after a few beers, suggesting to heal cuts with placenta. He wore a bleached mohawk and had plenty of tattoos. He told us a story how he broke his neck while break dancing, broke his shoulder while skateboarding, was taught reflexology by his Japanese grandfather, and had a brief career as a comedian with his father. On the other hand, Phil’s instructor was a modest dude, had another job aside from instructing, and was saving money to marry his girl. He was a bit shy, really smart, and laughed at all of Phil’s jokes. Both instructors lived to surf. 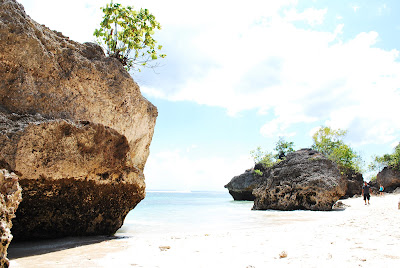 Tuesday Daniel, my instructor, took us back to Batu Balong, but I think we surfed Old Man. They are right next to one another. I can’t be sure. Before we got in the water Daniel gave us a huge lecture on the structure of our situation. There’s a channel you paddle out through, so you don’t get hammered by the wave. The wave can get shallow in spots; you must be aware of large rocks and reef. My mind was quick to let me be intimidated while he was speaking. It took all my strength to ignore myself and pay attention to Daniel. Once in the water it was a lot to think about. Plus there was a current so I constantly needed to keep an eye on the shore to make sure I didn’t drift into a danger zone. The paddle out was long. The waves weren’t huge but they were big enough. I just felt like I was fighting. Daniel would call behind himself; warning us to paddle faster so we didn’t have a wave crash on us, or maybe so we’d get out quick enough to catch a good set. I could never figure it out. Like I said, I was in fight mode. And the waves kept rolling, rolling. He’d say, “Go.” I’d say, “Shit.” He’d say, “No shit.”
Then, “Holy Shit, I actually caught a wave.” Almost…Yup. There it is. I stood up. Yes! Finally I am riding waves. The effort pays off. I forgot how tired I thought I was. I forgot everything other than me, waves, and a board. It was a good time. Unfortunately the waves kept getting bigger, and I did eventually get tired, and the wave started to get crowded. I paddled back to shore.
This particular week we spent at the surf camp made me appreciate snowboarding even more. I have come to the conclusion that snowboarding is for kings and surfing is for beasts. In surfing there are absolutely no guarantees, and you are constantly working. It’s hard work. There is so much you can’t see. There’s a lot you have to train yourself to see. There’s a lot you have to think about. There’s also a lot you have to force yourself not to think about. Much of snowboarding is handed over on a silver platter; a platter that we pay for in the price of admission. We definitely pay for it…$$$
Surfers love dawn patrol; but skiers, alike, love the first run. Is there anything better? One thing you don’t do in snowboarding is call last run. That’s how you get hurt. In surfing you have to call last wave. Otherwise you might never get out of the water. Another thing they do have in common is that both activities, surfing and snowboarding, need to be followed by hot tubs and local beer…in my opinion. Actually, if you think about it, a ski trail in the Poconos after a tiny snow fall can be a lot like a crowded lineup in the ocean. They’re both a great way to get decapitated.
Oh man. I hate to admit it, but if I could change one thing about snowboarding; I’d make snowboarding food more like surfing food…cheap burritos, noodles, peanut sauce, and pancakes.