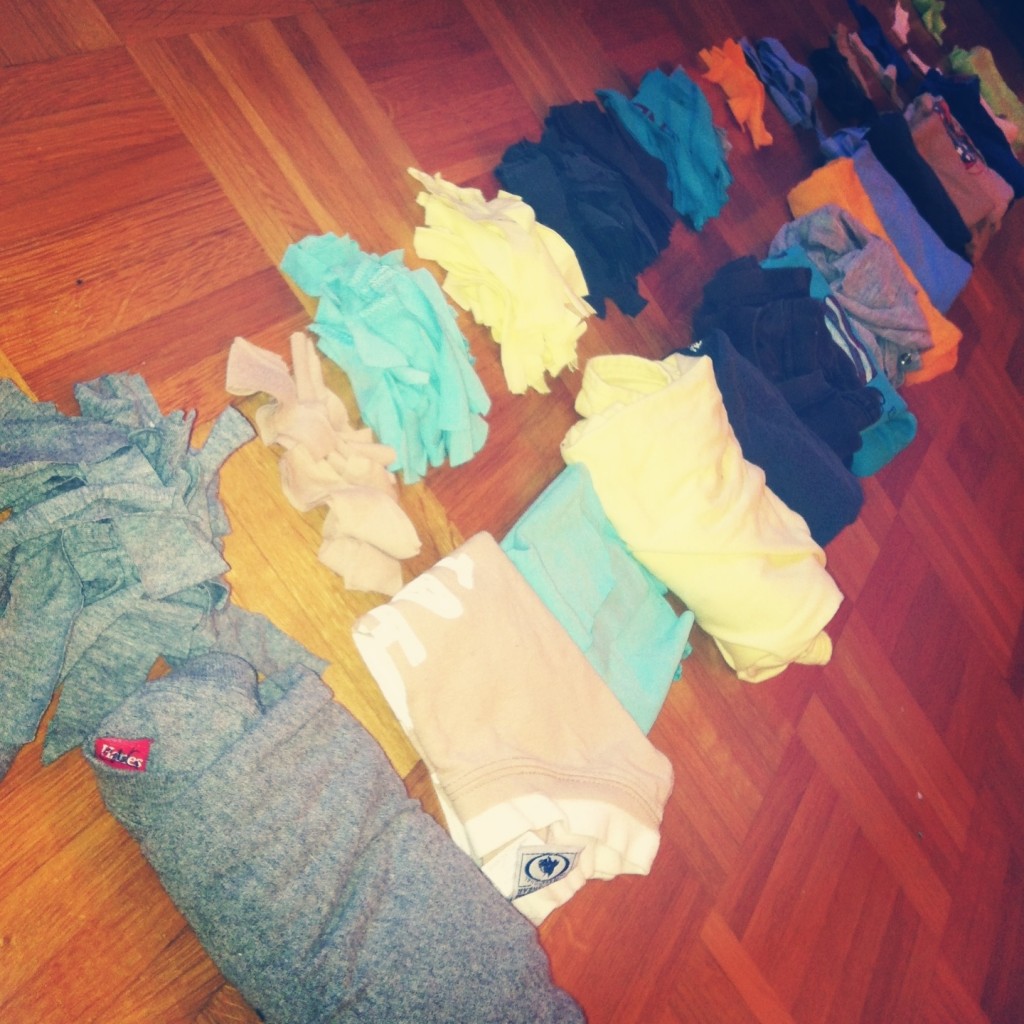 From this angle you may not recognize this project. It’s old T-Shirts that I’m shredding and knotting to make a rug. I had a bunch of shirts to up-cycle, and I got the idea for the rug while I was in the dollar store last April. When I initially began the project I photographed it and blogged about it; so long ago that you have to go back to the old blog to find it. It’s been over a year, my rug still isn’t finished, but I’m not gonna flake-off. It’s Tuesday night, Police Academy is on TV in German, and I’m slicing and knotting away. 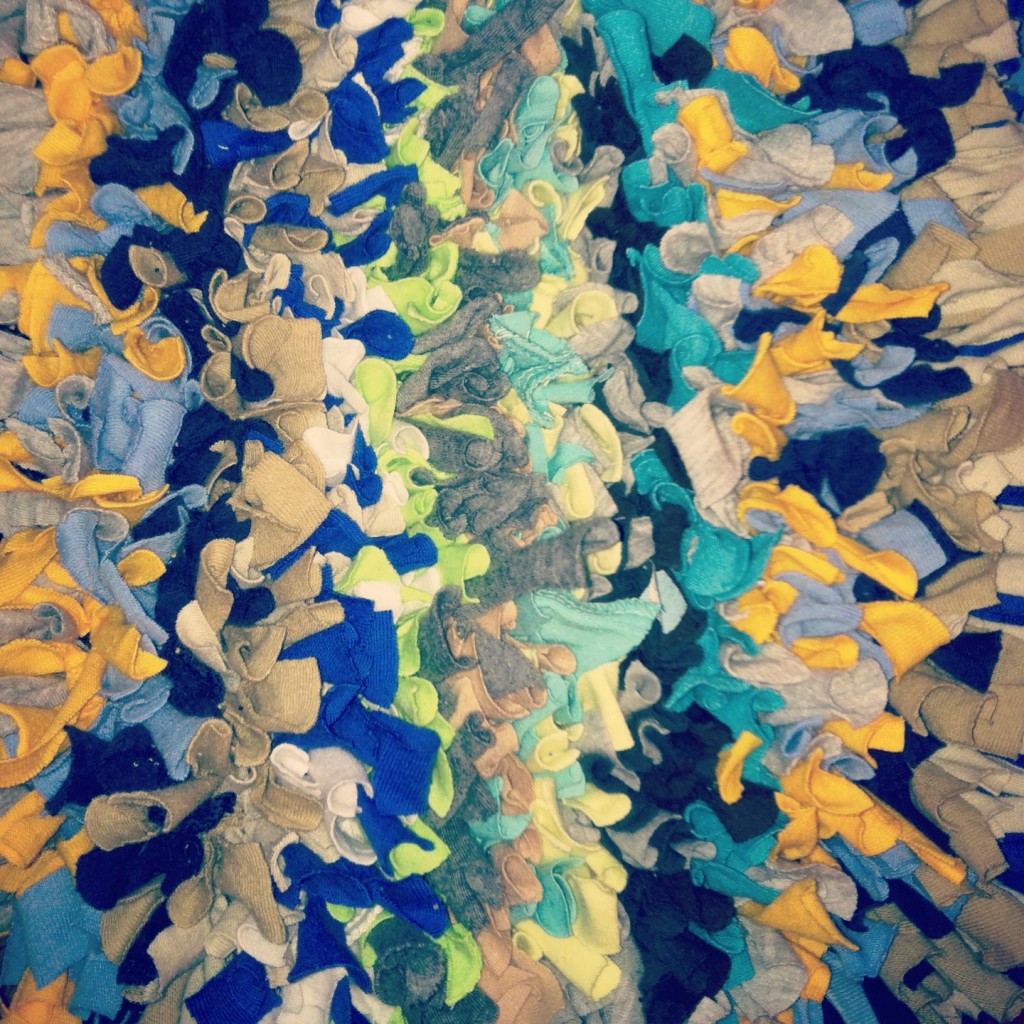 Each stripe of color takes me about an hour to cut and tie. I’ve got about 1/5 of the rows filled. When ever I am in the first half of a (seemingly) tedious project I feel incredibly antsy. My brain wants to skip to the finish line, not enjoy the process. I focus on the fact that I will be repeating the same movement over and over, making tiny progress with each movement. I call this slow craft. It’s kinda-like slow food. You gotta plant the seeds, water it, nurture it, let it grow, admire it, then pluck it, rinse it, bite it, and savor it. Crafting is very popular right now; and simple, easy, quick crafts are all the rage. Frankly it upsets me. I found a book at the library the other day. It was a craft book I was immediately drawn to for its size, its buzz-word title, and its imagery. It was boasting to be a “craft-a-day” book, with tons of patterns. Without naming the book or title, let me just say it was complete crap. Well, maybe not complete crap, but not what I expected. It was the same series of crafts every Monday thru Sunday with varying themes. It was a smart way for an author to complete such a large book, so efficiently, but imagine a cookbook that used the same 7 recipes and just varied a few of the ingredients…like 365 Days of Lasagna. (I’d wanna barf halfway through the year.) I believe that this book would be a great inspiration for someone that doesn’t want to devote too much time or passion into a craft. 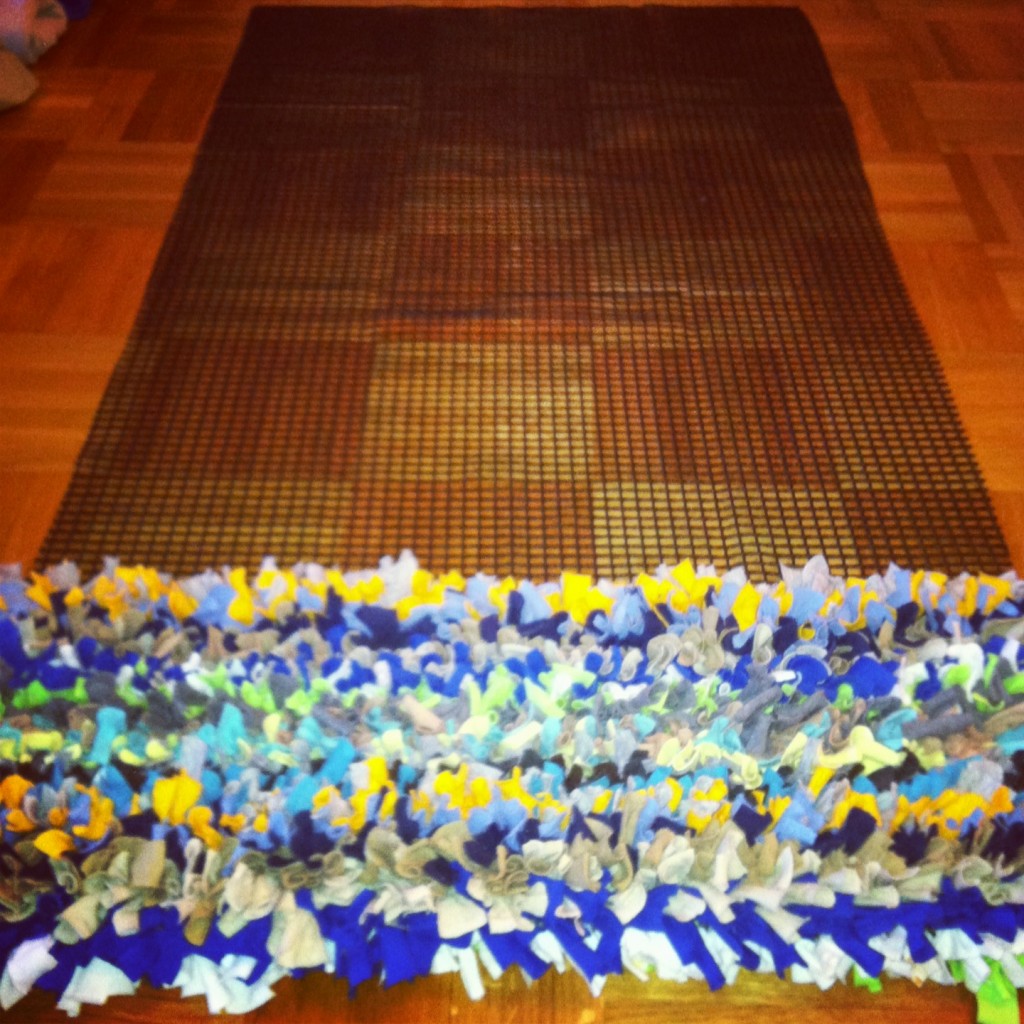 As I work on this rug I have plenty (too much in fact) of time to think about all the other paintings, projects, and scarves I want to get at. It’s in these moments however, that I remind myself that this project was my idea, I liked the idea initially, and I need to see it finished. I need the sense of accomplishment, not abandonment. I remind myself that the process is simple and soothing, and I’m fortunate to have the time and ability to tackle it.

Just please don’t ask me to shell peanuts (ever again) and make my own peanut butter…Enough is Enough!