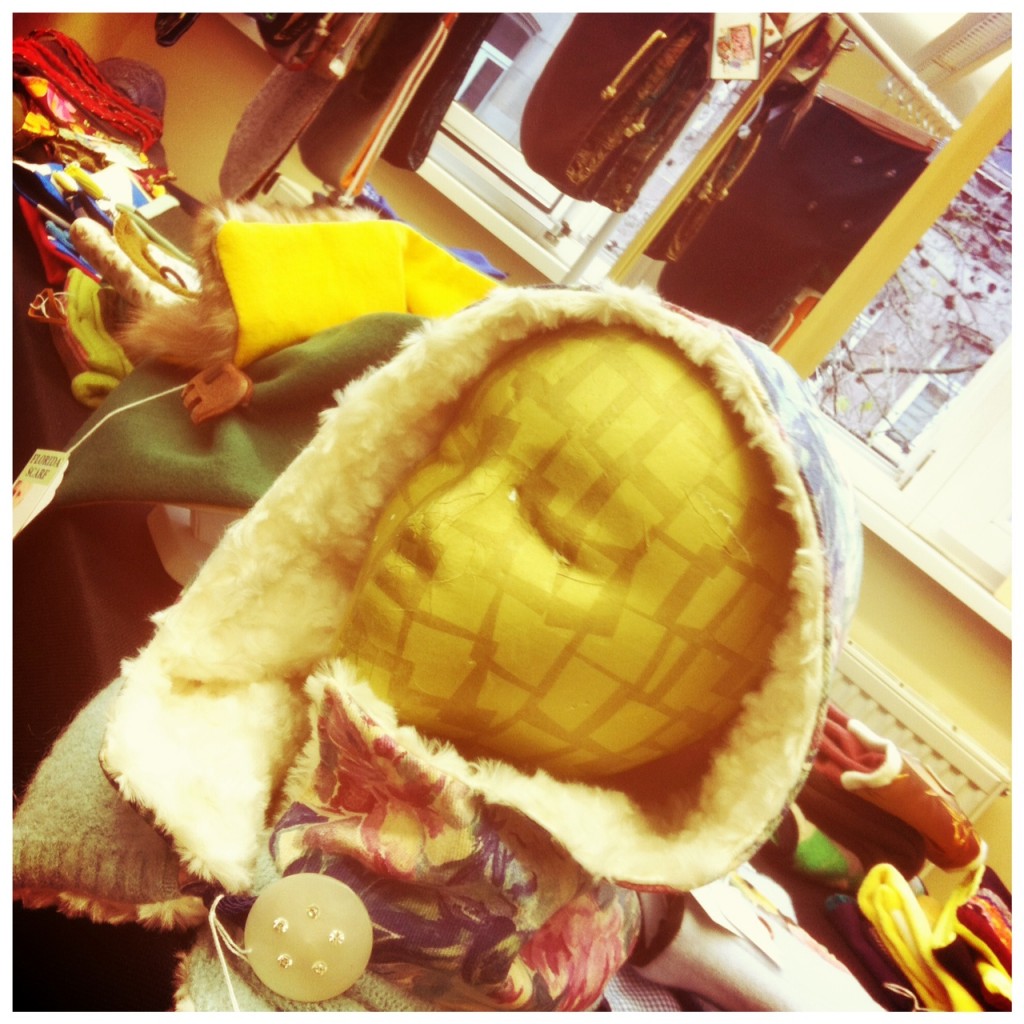 The bazaar at the Volkshochschule (Adult Education Center) in Fürth started out this year, a lot like it did last year. The space that was designed for us vendors to fit in was unbelievably tight, I didn’t get the “space with a wall” that I paid for, and I had to make a game of Tetris out of setting up my rack and full length mirror effectively around my table. It was a good thing I forgot to put deodorant on that morning; because before I realized all of this, I had to make two trips from my car in a garage around the block, to the school, up the stairs, in the elevator, and down the hall.

By these first couple of sentences you could imagine the tizzy I had myself in. This year I didn’t bring Katharina to get me out of any language-tangles and I think that had me on edge. Once I was set up the nervousness began to disappear though. I had all of my scarves and hoods perfectly arranged in record time; so I set my business cards on the table and decided to stroll around the first floor of the school and peruse the rest of the tables for unique holiday gifts. The (ever-encouraging) voice inside my head told me it would be auspicious to buy a few items from others, and therefore increase my own luck with sales. 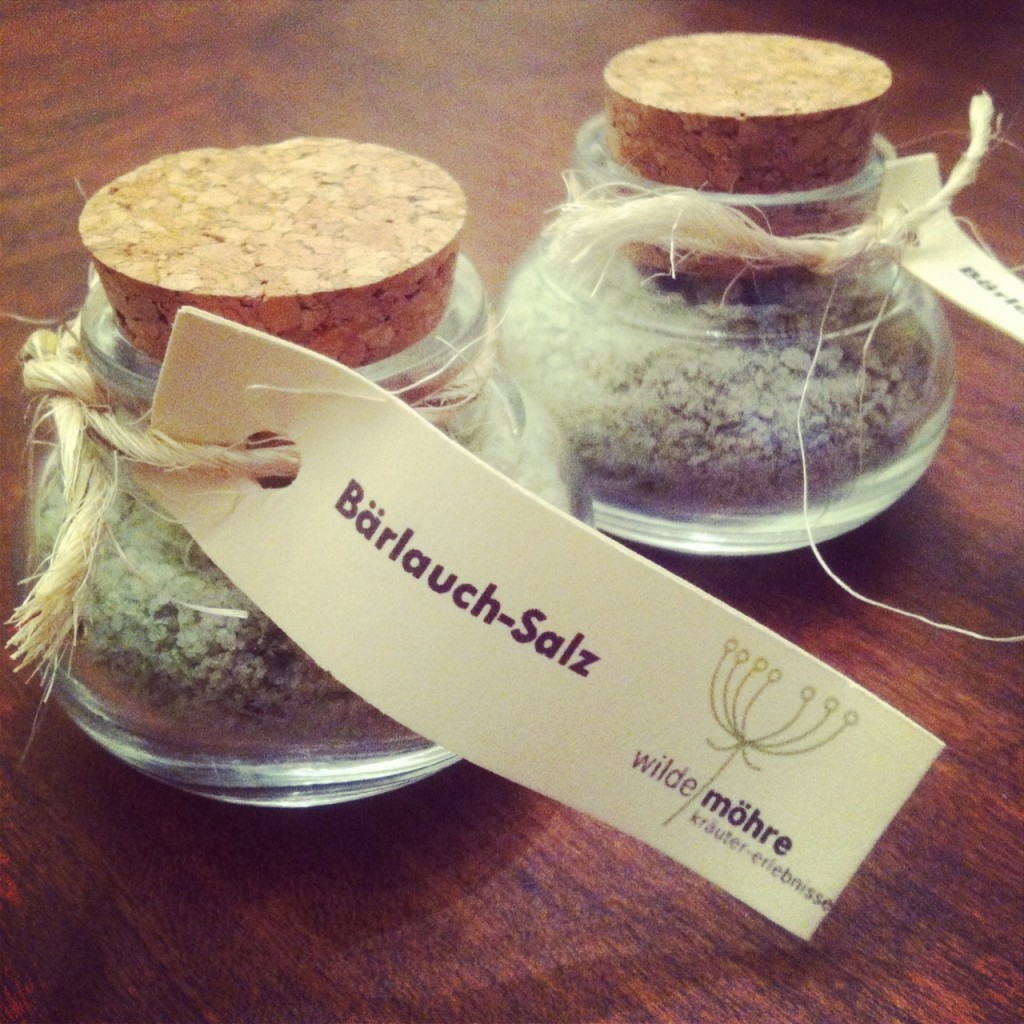 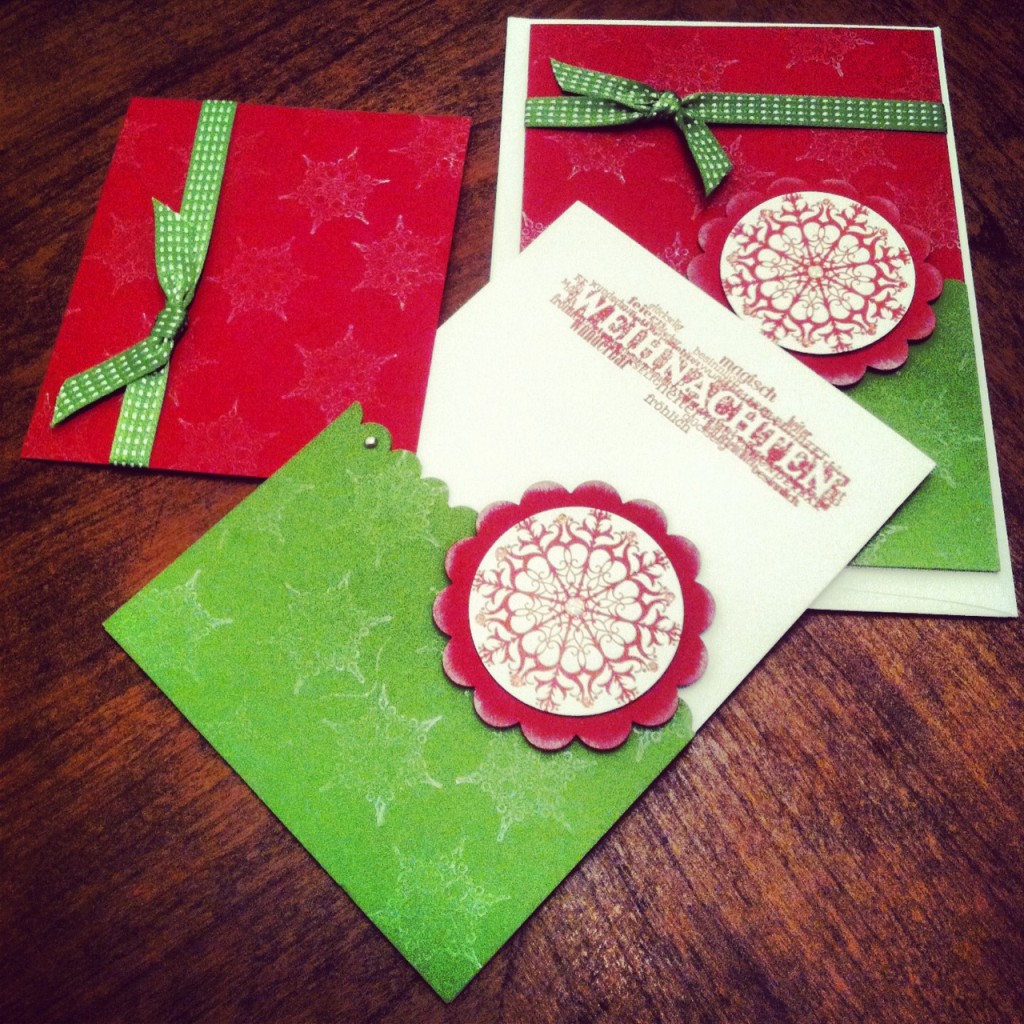 Did it work?
Of course it did. Although for the first hour and a half I was chewing my lip in anticipation…and sweating a little. It was pretty warm in the school and if you remember, I forgot to put on deodorant. I was thinking to myself, “Maybe no one wants to buy a scarf from an American. Maybe they’re afraid they are bugged and I’m assisting my government with spying.”
Seriously?…C ‘mon. I can’t make jokes?
Many other vendors bring amusements to occupy their down-time and take their mind away from the inconsistency of sales. Let’s face it. We’re not working the register at the post office the day after a holiday. Time will lapse in between the waves of customers. Some read the newspaper, some put on magnifying glasses (that make them look like they have bug eyes) and bead jewelry, and others eat or look at their phones. I enjoy the ladies that bring their husbands for company, and all the guy does is sleep the whole time. But my favorite yesterday was the lady who knit socks to raise money for the animal shelter. She was terribly sweet, (very chatty to everyone and smiling) and when she would be knitting her head would bob in time with the rhythm of her needles. She looked a bit like a bobble-head; and I make this observation in the nicest way possible. I found it charming how quickly she could get lost in her activity. I am now wondering if I have any weird, motion-quirks when I am entranced by work, that someone has yet to point out to me.
As much as I could judge I had no problems with my language barrier. I spoke to almost everyone that walked up to my table, and I’m confident they understood me. I can say this because I was corrected more than once, by a customer, on what I was saying or how I was saying it. I’m happy about that. It means, not only were they listening, but they cared enough to help me. I committed a bunch of new words to memory yesterday, but my favorite was Tombola. Tombola is German for Raffle. And since you can’t have a bazaar without a raffle; this will not be the last time I am called upon by this word. My vendor-neighbor won a Florida Scarf in the Tombola. They were excited. I was flattered.
Selling in a city is interesting. Most of the holiday gift seekers come wearing backpacks; leading me to believe they walked to the destination or took the train. My favorite seeker was this fabulous old lady. She was tiny; and had large, penciled on eyebrows, painted nails, a long white coat, a knitted beret, a fancy Bogner backpack, and two hiking poles. It is very common for Germans on long walks to have walking poles, but I haven’t seen many in a city with them. It’s my guess that it must be how she keeps her balance. Like, if she only had one cane she’d topple over. She needs one on each side, but she refuses to use a walker. As much as I liked her; she didn’t care for me. She was more enamored by my neighbor’s oversized plastic greeting cards that had (working) christmas lights strategically placed behind the windows of a house in a winter Christmas scene. As she was fussing in her Bogner purse to find her money, for one of these impressive decorations she was going to buy, she knocked over her walking sticks and they took out half of the hats on display on the table next to her. At my ripe age of 32 I found her to be totally amusing. When I’m her age though, I’ll probably be her.
My Saturday wrapped up quite nicely. I even had an Army-friend stop by the bazaar in support. Lots of other vendors had acquaintances stopping by, hugging them before they did a little shopping. I was pretty happy to see Alison, and when she arrived I hugged her. She was probably caught off guard…either by my over enthusiasm for her presence or because I hugged her at the end of a day without deodorant. At any rate, she stayed until the end and helped me carry my belongings to my car. Then we wrapped up the afternoon at an adorable cafe in the downtown. It’s a cozy, beer, (homemade) cake, and coffee restaurant, that looks like a German grandmother’s living room. It’s got a fireplace, cafe tables, couches, dark wood accents, old photos, and clocks (of all kinds) all over the walls. The ladies running the place are warm and friendly, and the old-guys slugging beers in the corner are funny. I ordered a pilsner as our gray-haired neighbors were flirting with us. The waitress asked me if I wanted a small or a large. When I didn’t reply right away the waitress said, “You better have a large.”
She was right. A small beer would have disappeared way to quickly. As I settled down on the couch in this other-worldy setting, babbling to my friend about this-and-that; I couldn’t help feel a sense of pride.
I did it. I sold scarves. At a bazaar. All by myself. In a city. In Germany.
Thank you, reader, for reading this, and for your support. You probably knew this story was going to end nicely, before I did.
You can find Cafe Haferl for yourself at Schwabacherstrasse 5, Fuerth, 90762.
If you go, tell the old guys in the corner to keep it down. The waitress can’t understand your broken German over their drunken boasts.