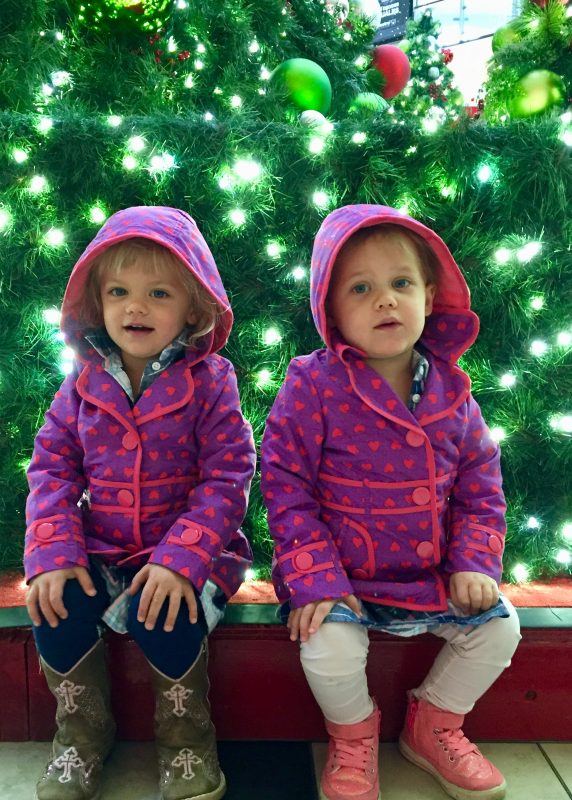 This month I’ve been teaching Lila and Nina all about Christmas, not just the stories of Christmas but also the things you do during Christmas. As you might imagine, it’s been a lot of fun and a lot of work. And you know me, and you know that I can be a bit ambitious with my ideas, so there have been more than a few what the heck was I thinking moments. Please keep in mind throughout this article that Phil is not home this month. Had there been a sane adult in the apartment the Christmas happenings would have been wildly different.

My most favorite part of Christmas is the music. Our days begin at 6:00 am with the decorations lit, the festive music on, and diapers being changed. On the mornings that I am a bit slow the girls will command me to turn the music and lights on. It makes me roll my eyes, but secretly I love it. They know all the words to Santa Clause is Coming to Town. They also know days 1-5, of The Twelve Days of Christmas. They like when I sing Little Drummer Boy, but they refuse to join me yet. I have recently learned this; singing songs together is fun, but practicing the same song repeatedly in order to teach/learn the words is a lot of work. 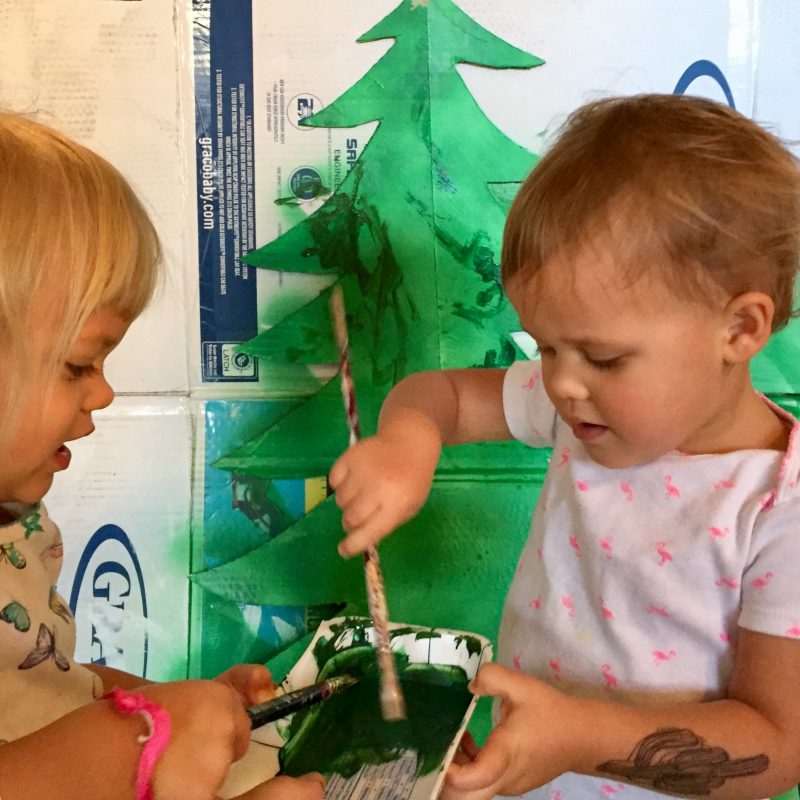 A close second to Christmas music is the tree. Christmas trees in general are beautiful. Each year my tree is always anything but. At the start of this season we had no tree. I decided we should make one with cardboard. From the beginning Nina and Lila were very enthusiastic. Surprisingly that enthusiasm lasted until the end, even though the project took us four days. I would have figured this amount of attention to be beyond a two year old. I drew the tree and cut it out while the girls watched. The girls primed the tree. (But only on one side. Once they were asleep I primed the other side to save my house from being covered in gesso.) Then I spray painted the tree green while the girls watched. (The brilliant thing about toddlers is that they think they are still helping when they are watching.) Then the girls painted on the tree with more green paint. (I let them do both sides.) While we were between stages the girls were busy making the decorations for the tree; cutouts, junk glued together, and flowers made from egg cartons. Once the paint dried we glued our ornaments on, assembled the tree and wrapped the lights. The initial plugging in of the lights was a very proud moment. 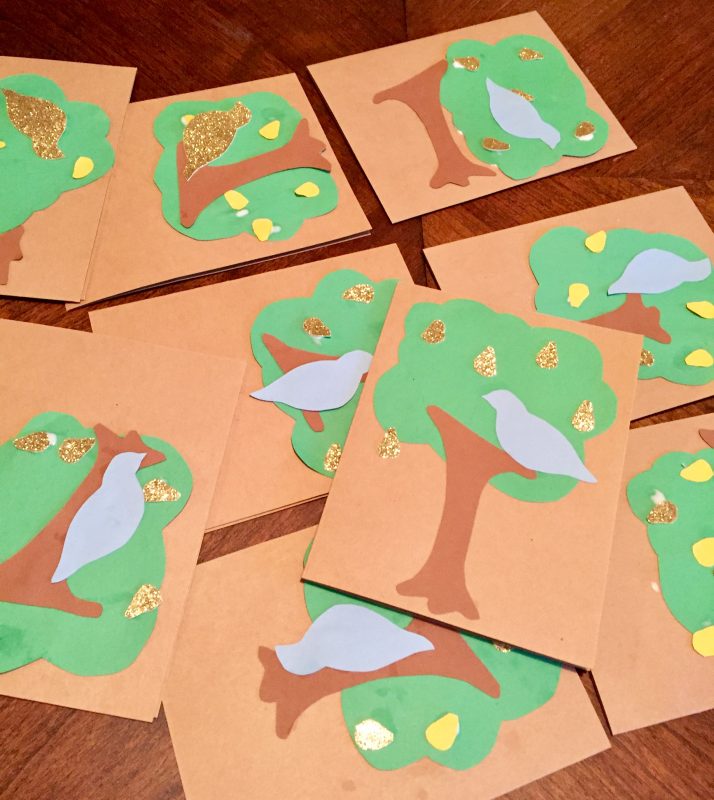 A nice tradition during this time of year is the greetings. Of course I love getting holiday cards more than I enjoy the work of giving them, but I reason that those that I love enjoy getting them as much as I do and I am energized to get the work done. Having the girls help created extra work on top of work, but the cards are terribly messy and charming. Currently we are only 30 cards into the project so don’t be surprised if your card comes late. Each time we do a batch of cards Lila likes to end our gluing session by saying, “That was a lot of work.”

And then there are the cookies. I used cookies this year as a way to teach the girls that the holiday season is about giving. We baked over 100 cookies (which is probably small potatoes to some of you out there), bagged them up, and gave them out to our teachers, librarians, apartment complex staff, neighbors, and friends. Don’t worry; after all that mixing, rolling, cutting, and waiting I let the girls eat three each to celebrate. 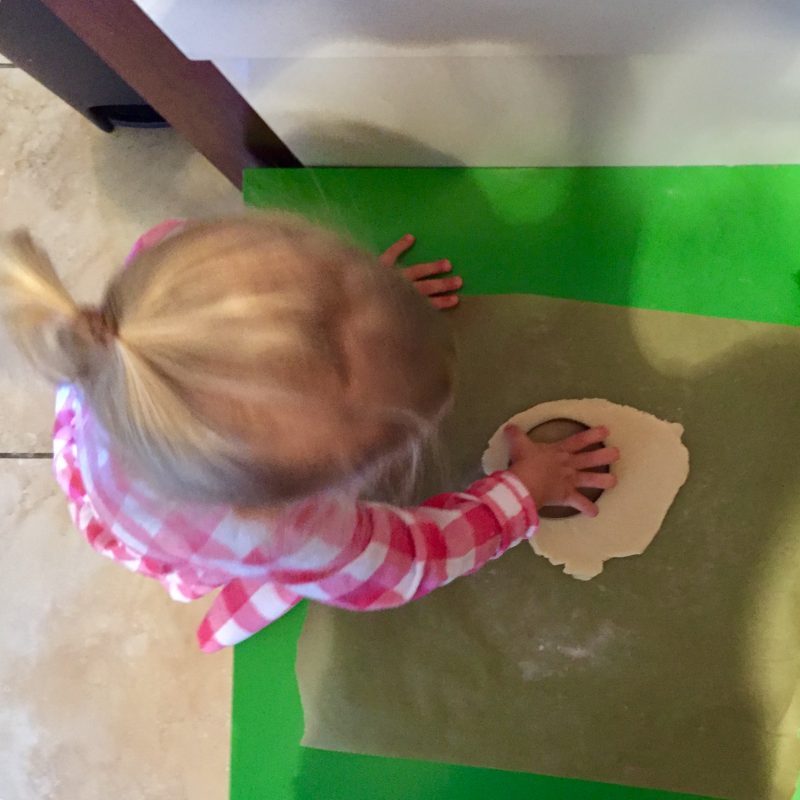 There has only been one day of snow so far here in El Paso. That’s also the day my phone broke and we had to go to the mall to get it fixed. It was a great excuse to bundle up and go visit Santa! The girls loved the decorations at the mall, but they were not at all interested in a real Santa. I think they prefer he remains a fairytale. Rightfully so, the story of Jesus makes much more sense to them than the story of Santa. They have a toy nativity that they love playing with. Last year Jesus was called Gigi, this year he spent a brief period of time as Baby Moana, but he is finally now Baby Jesus. Nina says he is a good baby and never cries.

And the best part of this Christmas? Nina and Lila (and I for that matter) have never spoken once about the two of them getting any gifts for Christmas. I think they will be genuinely surprised on Christmas morning…if only for this year.

2 thoughts on “Working on Christmas”