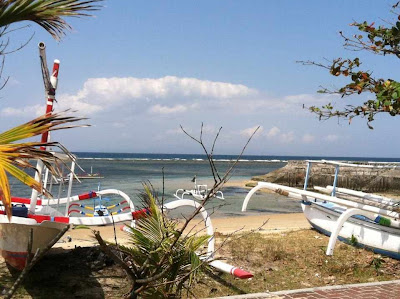 We arrived in Bali as the sun was setting on Tuesday. Wednesday was our first full day. We had no plans, but you have to have a day without plans so you can investigate and make plans. We wandered around Sanur and absorbed more of the Balinese culture.
The curbs are insanely tall along the sidewalk. It’s goofy what an effort it is to get up and down them.
I was also impressed by the peoples love for Gingham. It’s black and white gingham, and it’s everywhere. They wrap the fabric around trees, shrines, sculptures, and themselves. They also love their flag. If things aren’t black and white gingham; they are red and white striped.
I also noticed spiritual offerings everywhere. The Balinese have short ceremonies multiple times in one day. They make offerings to the Gods to keep them happy. An offering will consist of a banana leaf folded into the shape of a tiny box top. It will be filled with rice, crackers, candy, flowers, incense, and a cigarette. The offerings are sold around town for the equivalent of about 5 cents, and they are placed in front of every doorway along the street, at statues, and on some cars and mopeds.
There’s a lot of stray dogs in Bali. They love to fight one another in the middle of the street. Don’t compliment one of these dogs, on anything. I playfully complimented a dog on her tits and she followed us for the next twenty minutes. It was annoying. Good thing she couldn’t speak , she may have tried to sell us something.
It’s also hard to not notice that the favorite Balinesian past time is solicitation. Everyone, whether store owner or not, is trying hard to sell you something. No exaggeration, when you walk down the street you must say “no thank you” every five seconds. The taxi drivers can be the worst. Just because you’re walking doesn’t mean you need a ride. But they don’t understand that; they hate to see you travel by foot. You’d like to avoid these sales scenarios by walking in the middle of the road, but you’d risk getting mauled by a moped. It makes you thirsty.
Intermittently we’d stop at a bar, to use the bathroom and WIFI. We really lucked out with the toilets on this first day. I didn’t realize how sketchy the public restroom situation can get until later in the vacation. In Bali there are only two kinds of Beer, and every restaurant, cafe, or bar is consistently out of Storm Beer. So you drink Bintang; it’s what everyone drinks. It’s everywhere. “If you can’t escape it, drink it.” That’s my motto. Bintang is nothing more than Heineken with a different label; stilled bottled in Holland. Lucky Heineken; the red star fits nicely into Bali’s cultural themes.
I was also pleasantly surprised to find that so many establishments offered WIFI. This made it incredibly easy to search the Internet for our next hotel; a process I thought would be much quicker than it actually was. As it turned out we would be in Bali over three (or four) major holidays. This made last minute hotel stays a bit trickier to find. Normally it’s no problem because every other building has rooms. Eventually, after a couple of beers, we were able to secure lodging in another town for future days. 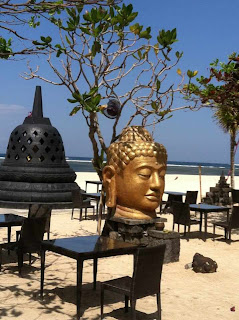 After lunch we strolled down the beach walk. There’s lots of pop-up food stands and souvenir tents. There’s also lots of nice, and large hotels. But Bali has an interesting rule. No hotel can be built higher than the highest temple (or maybe religious sculpture) so it has kept high rises to a minimum. When a hotel can’t be the biggest, they’ll get pretty clever at conjuring attractions. Like this giant (and hideous) diamond that you can get married in. Could you imagine? Who would do that. I find it completely ridiculous, but apologize if you’re married and that is where your ceremony took place. 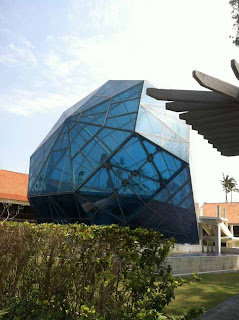 They day mosied along, with each of our happy, exploratory steps, and eventually we made it to dinner. The restaurant was called Cinnamon. The food was wonderful, and fresh, and they featured live dancing. Ceremonial dancing is a very popular attraction in Bali. You can buy tickets to nightly shows with varying themes, but we never did. This dinner show was plenty for us. The restaurant had a small stage with a perfect vantage point from every table. The dancers were beautifully decorated girls from age 4 to (about) 14. It’s a very theatrical dance that they put on to traditional music. They don’t move around much, or with much flow to their rhythm. The dancing appeared to me more like a serious of poses the girls changed in and out of. Put together in a string; the poses were used to act out characters and events in a story. This worked beautifully with the traditional music; which to me also seemed (at first) not very melodic. Initially I only heard this music as a series of sounds and tones. As I spent more time in the country though, with the music in the background, I began to notice its tune. I was impressed with how exotic I found the dancing show. My guess is that you may liken it to being in Hawaii and attending a luau. It was a feast for so many of my senses, but for the Balinese it is simply a part of their life. It is how they express their spirituality and tell their stories. Dancing starts at such an early age for women that parts of their bodies, like their neck, eyes, hands, and fingers, seem to be structured differently than mine. They are perfect for exaggerating and creating drama on stage.
After dinner we went back to the beach for some live reggae. I can’t imagine that there is a surf spot in the world that doesn’t have nightly reggae music. The band covered Bob Marley and UB40 perfectly. It’s funny though; do people know how much reggae exists outside of these two entities? Maybe. Maybe they don’t care. We had a wonderful time, and sang along to every song because we knew the words. During a set break the lead singer came around to entertain the crowd and make small talk. When he got to Phil and I, he asked Phil if he’d like to come up to the mic and sing a song. Phil politely declined the invitation, but he was obviously flattered.