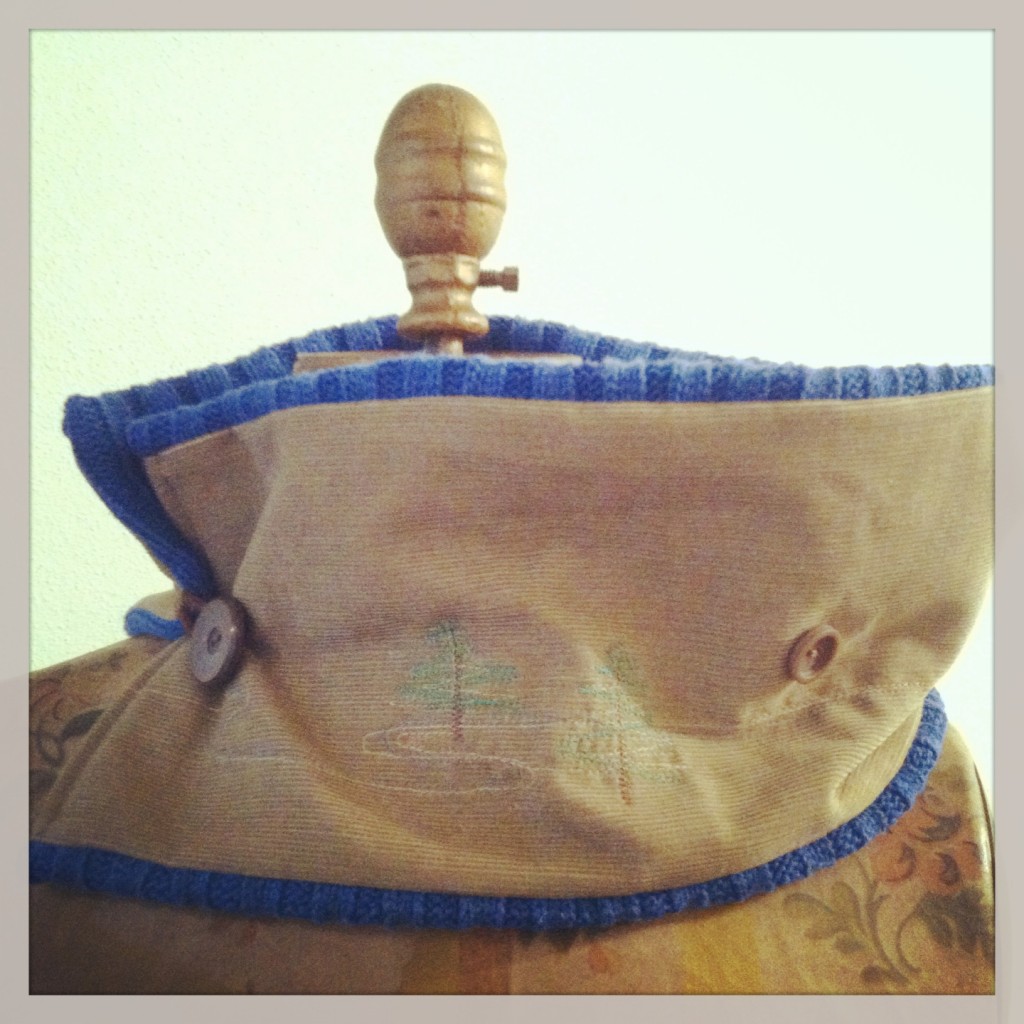 I have designed a new style of scarf. It takes me quite some time to create, but it’s a process I really enjoy. Essentially I am drawing on the fabric with my sewing machine. The design, and how many colors it contains, dictate how involved the task will be. Here I have drawn a landscape. It has land, two trees, a lake, and a few mountains. I used five colors. It’s a simple motif and, in using a straight stitch, the lines are thin. The resulting composition is colorful, yet subdued. I think it’s peaceful. While sewing, in addition to giving this scarf an illustration of mountains and nature, I created a story to accompany it. 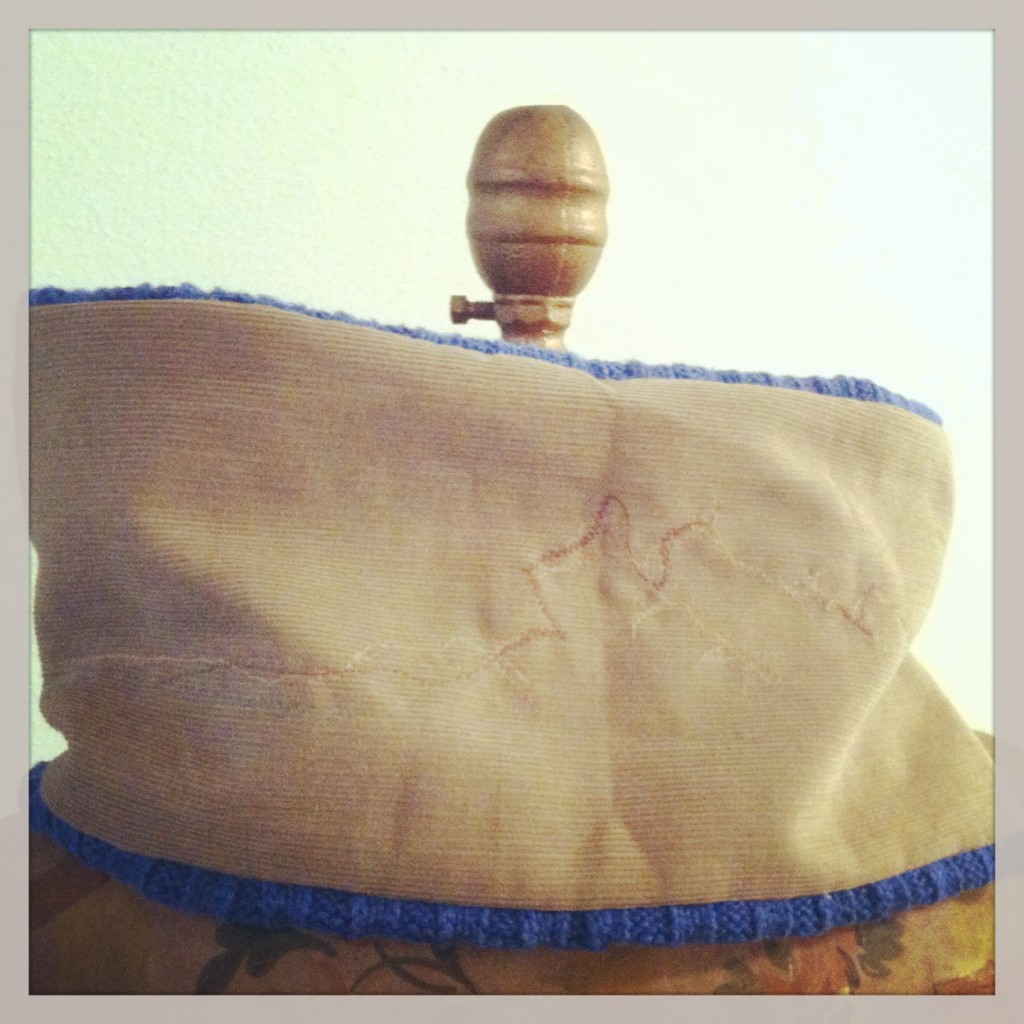 This is a story about a little girl. She met a boy and they fell in love. They viewed their life together as novel; with chapters beginning and ending as important things in their lives changed. Most chapters ended as cliff-hangers. They eagerly awaited to see how the next chapter would present itself. Like anyone’s novel; some chapters in the boy and girls’ life were boring, others were funny, some were romantic, and still others could be sad. A reoccurring theme in their book was that their lives were exciting and adventurous. For them life was a giant mountain that they couldn’t wait to climb together.

The girl was an artist and to her the mountain looked like a sustainable art career. She wished her mountain looked small with a tiny peak. If it were this way she could climb to the top quickly and there would be no one else up there but her. Everyone would love her and buy her art. But alas, her mountain was tall, and wide, and the peak was so far away that she couldn’t tell exactly how big it was. Before beginning her ascent the girl surveyed the mountain and plotted a path as to how she would climb up. The boy was a pilot. He was planning his route to climb the mountain, as the girl was planning hers. It seemed to the girl that the boy was more clever and efficient about his route. His seemed like a straighter, more obvious path.

They planned their routes together and decided they would climb as a team. Their ascent of the mountain started out great. Neither one of them was a very good climber, but they were having fun learning about climbing as they went along. The boy was definitely a better mountain climber than the girl. The girl’s feet hurt. Climbing made her sweat, almost to the point of tears, and sometimes she felt like she wasn’t cut out to climb the mountain route that had looked so great from a distance. Once on her path she realized that it, in fact, was much more complicated than the boy’s. Her path had big boulders that she would have to climb over, but it was alright because they made her stronger. Sometimes she would stumble over loose rocks and fall, but it was good because it caused her to stop and take a break from the climbing, clean herself off, get a drink of water, and start back on the journey fresh. There were more distractions on her route; pretty wildflowers to stop at for inspiration, and alternative paths to take that look like they may be better paths to the top. When a path looked as if it might carry her away from the boy’s path she would not look twice at it. When there would be a path that took her closer to the boy’s path she would take it. They loved climbing side by side. Sometimes the girl would get tired though, too tired to get herself up the mountain. The boy would let her climb on his back and he would carry them both up the mountain. Eventually this situation would cause the boy to become tired and annoyed. The girl would have to get off. If the boy had felt like he carried her for too long he would say things like, “I’m tired of this. Why can’t you carry us for a while?”

The boy and the girl would both laugh at this, or course, because the girl could never carry the boy. She was a normal size girl, but her neck, shoulders, and arms were very small. The best she could do would be to let him lean on her, but he usually never needed that. As they climbed together they both got better, and better, and felt good about being on the mountain. In feeling good they sometimes failed to see just how different their paths were. The boy, as he climbed, would face obstacles that the girl couldn’t even see; like fire-breathing dragons. He would fend off these huge monsters in order to protect himself, the girl, and their passage to the top. All the while the girl would be absorbed in learning how to be a better climber on her on path. They were not the only two climbers on the mountain. The girl would study other climbers and tried to emulate them. Sometimes she would pay too close attention to other climbers and begin to think they were being critical of the way she climbed. In her imagination she could hear them thinking that she wasn’t good enough to climb the mountain and she never should have started. She never clung to those images though, she would throw them away in an attempt to lighten the load that she was carrying up the mountain. And do you know what?

Just as she would throw away those dirty, useless thoughts she would become reenergized and climb better than she had before. Then, the people climbing near would say, “Hey girl! That’s some fancy climbing! I like that. This mountain is lucky to have you on it!”

Those were her best days. Hearing people compliment her climbing would make her proud; especially if the boy wasn’t too busy fighting dragons and could hear the nice compliments from the strangers.

This brings us to our current chapter. The boy and the girl are still climbing the mountain. They are still working with the initial maps and plans that they had drawn up. It’s funny though. Now that they are on the ascent, and have been working at it for so long, they can no longer see the peak. They know, as they go up that it is there somewhere, beyond their steep grade, and they are happy just to be still climbing together. When they began, they thought they would always have the top in sight. But even though they don’t; they are comforted by their love for climbing and the skills they possess. These are skills that they have confidently developed along the way.

Will either of them ever get to the top? I hope so. I hope they both get to the top together. If they don’t; I hope they at least keeping climbing for the top together. And when they’re done, and they don’t want to climb anymore, they will be glad that they brought their snowboards on the climb. When they decide to stop it will be winter and the entire mountain will be covered in snow. They will ride their snowboards all the way down to the bottom together; hooting and hollering all the while. They’ll go all the way down to their log cabin at the foot of the mountain. They’ll light their wood burning stove, put the kettle on, and rock in their rocking chairs with nothing on but their thermal underwear….the end.

Do you have a mountain story? I hope you do; and if you do, I hope you have someone to share it with.

Do you like this scarf? You can look at it more here.