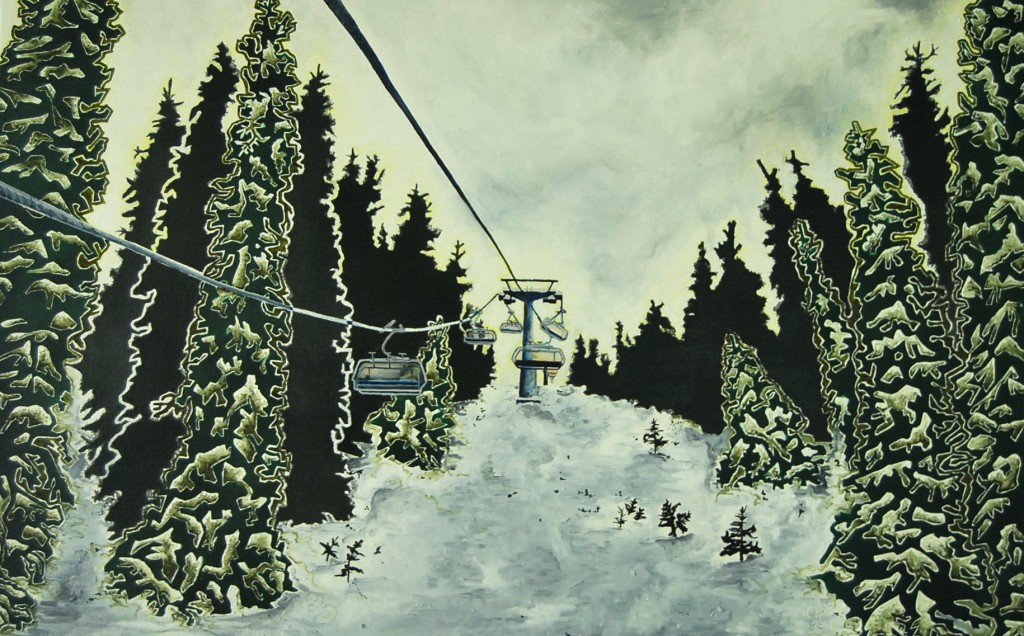 Laax, Switzerland. An almost-secret ski resort resting in the Swiss Alps. I describe it as almost-secret because it is not as widely known as some of your other European resorts like Chamonix, or Kitzbuhel. It’s always been a local favorite, of course, but has grown enough in recent years that we took a trip there last December. We were on the trip with a group of friends. Snowboarding with Phil is great, but snowboarding with friends is better. I think it’s super-fun riding down the trail in a huge pack; bobbing and weaving in and out of one another, throwing snowballs, and laughing when someone falls. Everyone gets to the bottom and dances to the music pumping out of the gondola speakers as we inhale the smell of sausage, cigarette smoke, and Jaegermeister coming from the snack hut. Each of us makes a few wise cracks about our performance on that last run, confirms that we don’t have to go to the bathroom yet, and then we all pile back into the gondola to share some extra laughs, snack mix, beef jerky, and whiskey from a flask, on the journey back to the top. Everyone in the group loves the trip; whether they are the best snowboarder in the world…’been skiing since they were five, or they are still carefully snaking their way down the trail…’been skiing since yesterday. To be out with friends at the top of the most incredible landscape in the world is satisfaction enough.

What’s my favorite part of skiing and snowboarding? The first answer is automatic. It’s the actual act of motion, carving down a mountain side. The second answer is (unless you’ve seen my paintings) maybe not so obvious. I love the chairlifts. I love their genius engineering. I love what they were designed to do. I love all the shapes and sizes they come in. I love what they represent; which, for me, is man’s attempts to tame nature, turn nature into something more manageable and enjoyable. When I’m riding a chairlift or skiing under one, I appreciate the juxtaposition of this symmetric mass of metal, concrete, and electricity that is in stark opposition to all that surround it; wild, living, breathing objects. 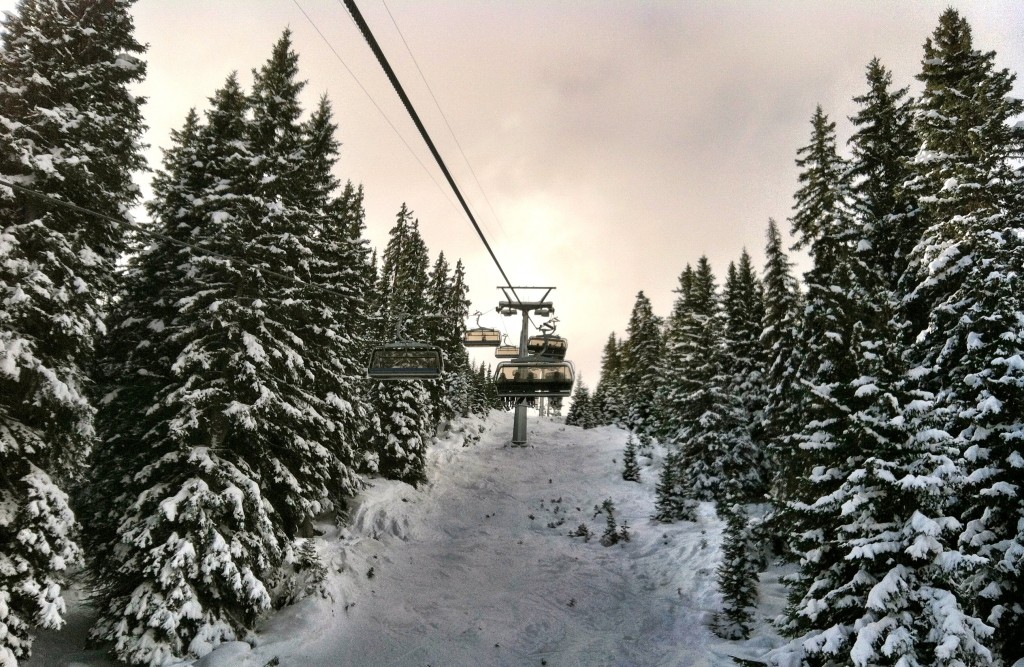 In an image, the machine of the chairlift always leads to the horizon. Strong directionals breaking a path through wilderness and up the edge of the earth, to end at the beginning of pure joy. I paint chairlifts because I like capturing the composition that is a chairlift on the landscape. I also like using the image to convey the emotions and energies that the sport involves.

On our trip in Laax, a buddy of ours expressed his interest in my chair lift paintings. He said he’d like one of his own. I said OK, we snapped some photos while we were there, and the rest is evolution.

To paint my chairlifts I always use a photo I have taken. A large part of the process is translating what I saw and felt at the time onto canvas. It’s a conveyence of sights, sounds, smells, and emotions that the landscape evokes. How I express that is through ingenuities of color, brushstroke qualities, and physicality of the canvas. A commissioned painting adds a third dimension to the translation; the customer. It’s what the customer saw, felt, smelled, and wants to remember from that moment that becomes most important. I know my customer doesn’t want photographic representation of the landscape; that is what cameras are for. He wants the experience documented by someone with feelings, who has been there, loved it, and is going to go back for more. Giving someone what they want, and having that act be born of something that I want, is distinct in my work. 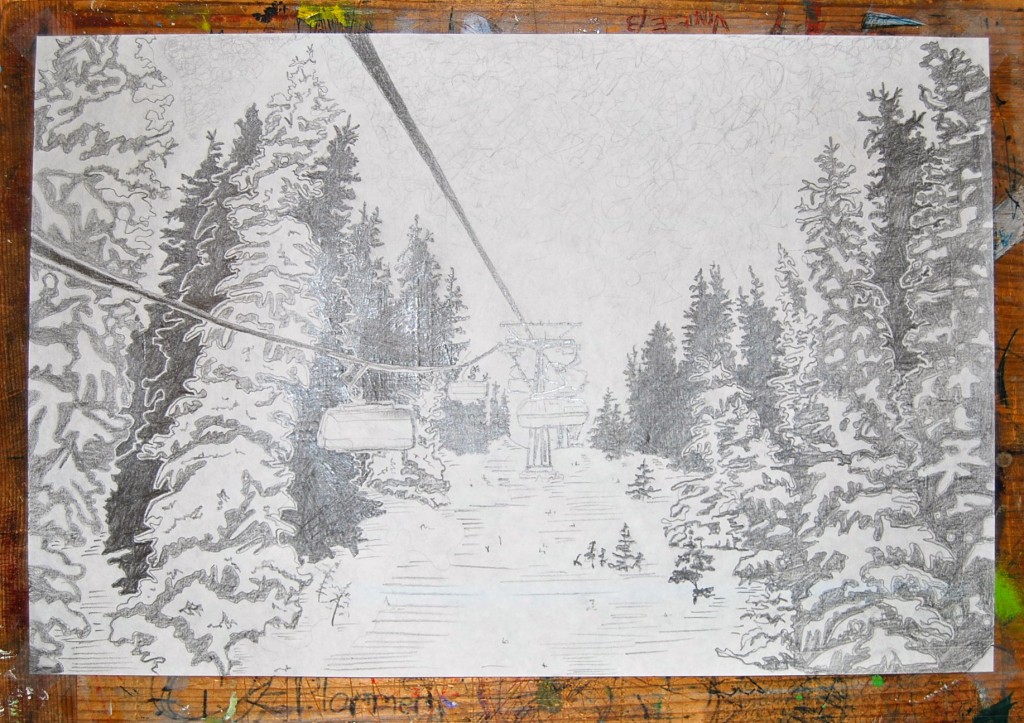 I have habits and artistic tendancies that evoke characteristic translations. A single pine tree has over a trillion needles. Am I going to try to paint them? No. Every branch is covered with it’s own unique shape of snow. Am I going to stare at a photo until my eyes cross to exact that? No. I come up with new ways to describe the details involving interesting shapes and techniques.

Contrast is the biggest theme in my work. It begins with the contrast of machine and nature. It is supported by a contrast of materials, (spray paint and oil paint) technique, (stencil and fine brush strokes) and color. Normally I like to get right into a painting, make a huge bright blue sky, and pop it by adding orange or gold, somehow, in the mix. For this particular painting I had to tone down my color palette. I believe haunted is the word the customer used to describe the desired mood for his painting. There is nothing haunting about blue and gold. So a huge task here, for me, was giving the painting the level of contrast I need to enjoy my work, while giving the guy the level of haunted that he needs to continue to admire his purchse for years to come. The result is one of my most strong, energetic, yet psuedo-monochromatic, paintings yet. (I’m going to have to award that word as the most awesome word I have made-up to describe art yet…pseudo-monochromatic) 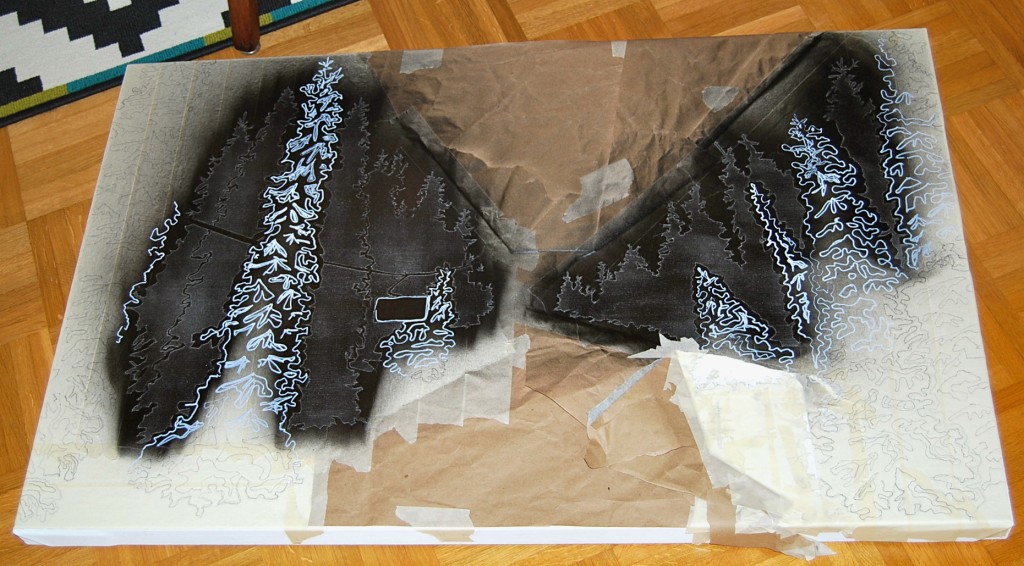 Of particular note, a new technique I employed was a double spray paint stencil. Normally I choose one element of the composition, build a stencil for it, and spray paint it in. In this painting I chose two elements and made two levels of stenciling. One level is the solid, black, background trees. The more energetic, foreground trees were spray painted with a dark green. The green tree stencil involved many asymmetric donut holes, all hand cut, that I later went back in and filled with oil paint of three to four colors. In the process of filling those donut holes with heavily shadowed snow, I found myself getting lost in each one. Individually, they each unfolded into miniature paintings themselves. These, small paintings within a painting, are obvious when you stare at the canvas from inches away. Take a couple of steps back from the canvas, of course, and they join together, along with all of the other elements of the work, to form a unified body. It’s comparable to a clip of video from a satelite. You can zoom in on one individual; one guy riding one chair on one lift at one mountain resort. Zoom out a bit further and you can still see that one guy, but you also see the other people, the other chairlifts, as the resort as a whole forms. Zoom out again, and you can see the mountain range; barely making out the resort’s construction amidst the massive landscape. Zoom again and you see the continent the man at the resort is on. Even though you know longer see him, the composition that he is part of makes sense. The image is good….Life is good.